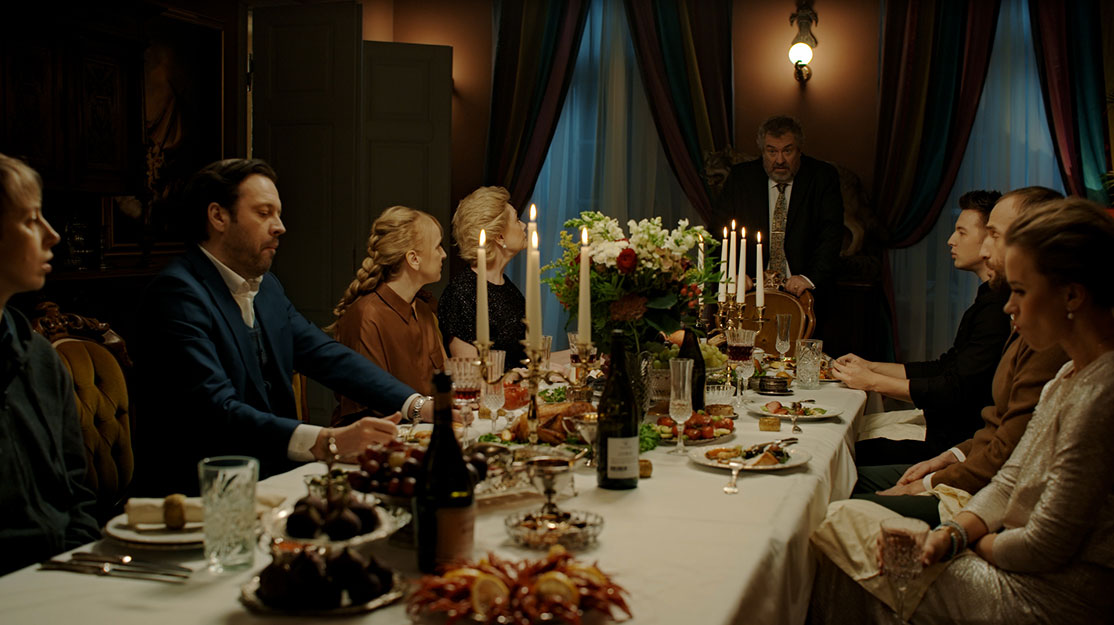 Who Shot Otto Mueller? is the first Viaplay original series to emerge from Estonia. DQ speaks to writer Birk Rohelend about working with the streamer, toxic masculinity and her love of Agatha Christie.

As Nordic streamer Viaplay ramps up its programming strategy, with more than 70 original series premiering this year, crime drama Who Shot Otto Mueller? marks its first ever Estonian show.

The story begins when the titular character – a famous businessman and former Soviet wrestling star – is found murdered in his manor house on his 65th birthday. When detectives begin to interrogate eight family members all under suspicion, dark truths about the victim gradually come to light. Everyone has a story about him – and everyone has a motive to kill him.

Produced by Tallinn-based Cuba Films, the series is directed by René Vilbre (Class Reunion trilogy) and written by Birk Rohelend, a novelist and the creator of one of Estonia’s biggest series, The Pillowclub. Its cast features some of Estonia’s top acting talent, led by Jaan Rekkor, Tambet Tuisk and Märt Avandi.

“It’s been super exciting, something extraordinary actually,” Rohelend tells DQ about making the series. “We haven’t done anything like this – a foreign production – previously in Estonia. We’ve learned a lot; the feedback was very detailed and it was really great to see Viaplay so involved in one of our projects.”

The idea for the series emerged two years ago, following discussion and debate in Estonia around the #MeToo movement against sexual abuse and harassment.

“At the same time, we had a couple of cases that really brought up this ‘macho man’ idea from the previous generation – men who had all the rights and no responsibilities,” Rohelend says. “I started thinking that no one has done anything around this topic. Why do we still put up with these guys?”

Once the writer had come up with the title character, she immediately thought about killing him, and who would do it and why. She then took her idea to Cuba Films, and even before the company joined the project, she informed them she would deliver the first episode on spec.

After reading the pilot script, the producers did come on board and they began pitching the series to broadcasters. But Rohelend didn’t wait for a full greenlight to carry on writing and by the time they took the project to Viaplay, she had written the whole series.

“It was easier to pitch because the story was already there,” she says. “What often happens in Estonia is people pitch the first episode, they get the money, and development time is so short that if you don’t have a very clear picture [of the story], you can get lost in the process because you don’t have the time. I benefited because I had the possibility to create the story and sell the whole of it.”

Otto’s backstory is fully fleshed out. A former Soviet wrestling legend, his parents came from Siberia, where many Estonians were deported during the Second World War. He also harbours a win-at-all-costs mindset and a belief he is always right.

Meanwhile, his psychologist wife Merle has been brought up to “stand by her man,” so she has always supported him. But now in her 60s, she wants to be her own woman and has come to learn that you shouldn’t always listen to someone just because they are a man.

The couple have two sons. Oscar is a former athlete who always wanted to be as good as his father but never quite succeeded in it and doesn’t have the same character, while Oliver wanted to become a musician but his father didn’t consider this to be a man’s job.

“The biggest conflicts come from these inner beliefs that they have,” Rohelend says. “But everybody should be able to value those who think differently. Why this story is so relevant to me is because of my own father. Today he would have been over 80 years old and he was exactly as Otto is. He was super hard to even be around because he always said there were men and other people, and I was the other.

“You get downplayed every day with every sentence when you’re a girl, and I have also drawn a lot from his relationship with my mother. Why didn’t they just get a divorce? This is something that is very different with our generation, because we will always make the tough decisions and not stick with something that is so unhealthy. But they stuck together for more than 30 years, and that has plagued me my whole life.”

A big question Rohelend wanted to ask while writing the series was why people put up with men like Otto and how they are allowed to succeed in life. “Why does nobody stand up and say, ‘I’m not OK with this, you shouldn’t behave like this,’? Maybe that time is now,” she says. “There are more people now who do stand up say, ‘You can’t touch her. It’s not OK. You think it’s a compliment to grab every butt, but it’s not a compliment, it’s harassment. Let’s be clear on that.’ This is something that will change, and this behaviour will go away the more we talk about it.”

Early on in the writing process, Rohelend found the structure for the series, with all eight suspects in Otto’s death getting to tell their version of events. But after completing the first script, she then had to work out how to make the same story compelling multiple times over.

“I also didn’t know how interesting it would be, because you always go back to the same day,” she says. “It’s like Groundhog Day, but you go there through the eyes of another character and everything shifts, so then every other character shifts and the events are different. It’s very exciting. People who like psychological thrillers, it’s for them. I’m always looking for that type of content.”

Luckily, Rohelend likes complicated story structures in her series and novels – she has even penned a novelisation of the series with even more suspects. “One of my aunts is a public prosecutor and she said, ‘Wow, how did you put it all together?’ That was very nice to hear, a compliment like that from someone who has worked cases her whole life.”

To begin with, Rohelend created a timeline for the story and then filled numerous tables with stacks of paper covered in notes. “I spend months only creating the characters and the conflicts between them and thinking through how everyone is perceived by other people, and it takes a lot of time,” the writer explains.

“I had great support from the production team, the director… even the cameraman asked about some fantastic details and I realised they had noticed something relevant and I needed to make some changes. When we were shooting, some of the actors then brought in ideas and I was immediately like, ‘Yes, let’s do it this way.’ There was a lot of collaboration. Even though I did write the initial scripts alone, I have always had feedback, so I can’t say it’s just me.”

Rohelend’s previous TV credits have mostly sat in the crime and comedy genres, and Who Shot Otto Mueller? may seem particularly inspired by her love of Agatha Christie novels, with its big manor house setting and numerous suspects who all look guilty. But even though she’s a fan, the writer says she hasn’t sought to create something that would appeal only to devotees of the Queen of Crime.

Viaplay was also very involved in the show’s development. Rohelend originally created the series for an Estonian audience but initially found there were some topics and issues that likely wouldn’t have connected with the wider audience sought by the streamer.

“There are some things every Estonian knows and we don’t really think about whether other people can also relate to it,” she says. “One of them was the topic of abortion. They assumed that this was something huge, but here it’s not a social topic, it’s personal. I hope it will never become a social issue here.

“In Estonia, we currently struggle with other problems. We still have people who are very poo. I come from a poor family, so I think it’s a big issue. A lot of people of my generation are still very materialistic, looking for security in their lives and focusing on jobs and money. That was maybe something I needed to explain, that some societies are further on, but we sometimes behave like kids in a candy store. We’re so interested in everything we can have, and maybe in 10 years we will have the maturity to talk about it – that life’s not only about money and power, like Otto believes.”

Rohelend spent more time on set during filming than she had on any of her previous projects, with Kau Manor on the outskirts of Tallinn doubling for Otto’s grand home. But she says the experience became quite stressful when she saw how her dialogue would need to be cut or altered to match the action overseen by director Vilbre.

“If the kitchen was too small, I had to cut something because a character couldn’t speak for too long,” she reveals. “The atmosphere at Kau Manor, one of the most unique places in Estonia because there’s so much art, was also overwhelming. I am a Soviet child who grew up in Soviet houses, all these big, angular blocks, and then you go into a manor and there are people who have lived and grown up in places like that. It looks so good. Our team and the camera operator did a great job.”

Looking back on making the series, Rohelend says Who Shot Otto Mueller? was a story that wanted to tell itself. “This one had a magical pull and I had the pleasure of thinking through so many relationship themes, philosophical themes and things people really value,” she says, noting how people’s experiences shape their world views and life choices and help them to deal with the problems they face.

“My mum was a psychiatrist and she used her professional knowledge to cope with the negativity she got from my father, but perhaps she never realised the extent of the impact she had on her three children, and all of us – me, my sister and my brother – remember different childhoods because my father’s anger and depression progressed over the years.

“As the youngest, I got a big, angry man, but my brother remembers a man who went to the beach with him and was really cheery. I feel like this is not the same father, and think about how it maybe could have been handled better or what kind of solutions you need to look for where you don’t get stuck in this kind of situation.”

Meanwhile, with Who Shot Otto Mueller? having made its debut last week, Rohelend believes it’s too early to tell whether the show marks a turning point in television production in Estonia.

“I don’t know,” she says. “I just wish I had known it would be broadcast in so many countries,” she says. “At some point, I really started worrying about it. We all like Squid Game and that’s unique for Korea, but it’s a very different exercise to think what would everybody [around the world] like and what would Estonians like. Sometimes we like very different things, so you have to choose between the two.”