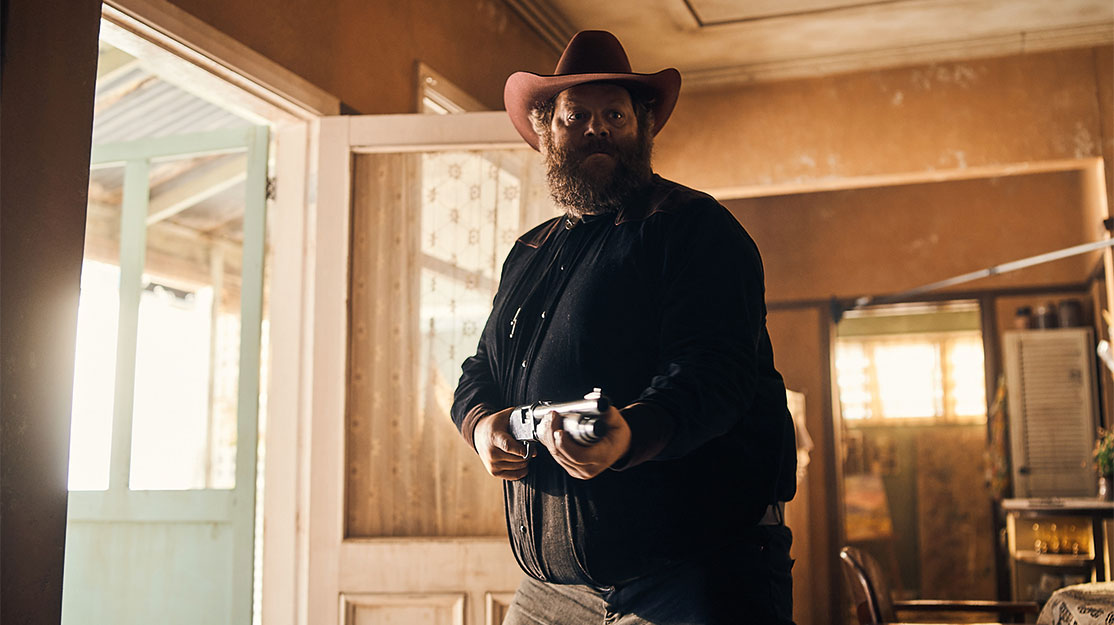 Shooting from the hip

Writers and executive producers Harry and Jack Williams discuss the development and filming of a key action scene from episode three of Australian outback-set thriller The Tourist.

When the series begins, Dornan’s character finds himself in the heart of the outback being pursued by a vast tank truck trying to drive him off the road. When The Man later wakes in hospital, he has no idea who he is, and sets off to find answers while mysterious figures from his past try to catch up with him.

The scene in question comes in episode three. Billy has been tailing The Man for the past two-and-a-half hours of screentime. He’s already tried to kill him by ploughing a truck into his car, so when we see him approach the house armed with a shotgun, we know he means business. The scene was designed to put our leads in serious jeopardy, so we needed to show that Billy is very happy to shoot people at point-blank range with no remorse. But hopefully there is also enough of the dark humour we wanted at the heart of The Tourist.

The rough shape of the scene didn’t change too much through development. We like action scenes to feel as real as possible but we also look for ways to give them an unusual angle. Ralph has taken out his hearing aids, so being inside his head while the mayhem of the shooting is going on in the background gave the scene its backbone. The ringing silence of Ralph’s point of view juxtaposed with the deafening violence felt distinctive and dynamic to watch.

Ralph is an innocent bystander in The Tourist – produced by Two Brothers Pictures for the BBC, HBO Max and Stan and distributed by All3Media – and we wanted to show how merciless and dangerous Billy can be. When Ralph is shot and flies back into the wall with a hole in his chest, we see how The Man has brought death into the lives of the quiet couple who own the B&B. The brutality of the moment later has emotional repercussions for The Man.

Billy exits the scene leaving a trail of death and destruction in his path, we have him walk past a sign that says ‘Life is made of choices. Wipe your feet or scrub the floor.’ We wanted a subtle nod to the theme of the show but also felt this sort of quirky sign was in keeping with outback setting. As Helen tends to the dying Ralph and The Man and Luci run for their lives, we’re quietly reminded that we’re all defined by our actions.

When it came to production, Burnt Lodge, the B&B owned by Sue (Genevieve Lemon) and Ralph, was made up of two locations. The exterior was shot at a dilapidated house in the outback, not far from the industrial town of Port Augusta. It has beautiful views, though was also one of our worst locations for flies. Fly nets were an absolute must. The interior of the house was unsafe to film in, and the scene demanded a fairly open-plan space that was going to receive a heck of a battering, so we realised early on that this interior would need to be built in a studio.

The room’s layout was very carefully designed by our brilliant production designer Scott Bird. The scene takes place both outside and inside, and there’s a lot of connection between the two. Creative solutions were used to achieve this connection; Scott designed and built a fake window that was brought to the location so we could film through it and see the approach of the murderous Billy.

Inside the main room, there needed to be enough hiding places for the other characters as Billy prowls around the room, so Scott designed various nooks and crannies. We also needed to match the exterior of the property on location, with the same window positions and door. To disguise the fact that the interior was a set, Scott came up with the idea of creating a fake veranda that screened the view from the inside to the outback, so that when you look through the windows, it never feels like you’re looking out at a green screen in a studio.

Alongside the set design, the scene was choreographed in a collaboration between director Chris Sweeney, director of photography Ben Wheeler, the stunt co-ordinator and the special effects supervisor. A lot of explosions needed to happen and we were interested in making these moments have meaning for the characters. We made the bullets hit items that told a story about Ralph and Sue’s life – so rather than a bullet just hitting a wall, it hit a picture of Sue and Ralph.

Chris storyboarded the sequence in minute detail, as there were a large number of setups to achieve. We colour-coded the storyboards depending on whether they were being filmed on location or in the studio. The exterior elements on location were then filmed first.
Unfortunately, the unit was hit by sandstorms that interrupted filming, so it was challenging trying to squeeze everything into the schedule. Later we filmed the interior scenes at the studio. The shootout was filmed in chronological order where possible, not least because of the make-up requirements. For example, when Billy is stabbed by Luci, the actor had to wear a prosthetic on his shoulder that we wanted to use in as few shots as possible.

Filming Ralph being shot was a challenge. A stunt double was attached to a wire that pulled him back on a jerk rig so he hit a mat and crumpled down. This required visual effects to remove the mat, the wire rig and the padding and create a realistic hit to the wall. Chris realised the best way to achieve the shot was for the camera to be pointing at the actor front-on, so we did a face replacement that superimposed his face on to that of our stunt performer.

Having shot two days on location and two in studio with the main unit, a second-unit team picked up details that didn’t require the cast, such a shots of bullet hits on the walls and close-ups of trinkets exploding. We threw a lot of time, energy and resource at this sequence but the finished article was just as we imagined.