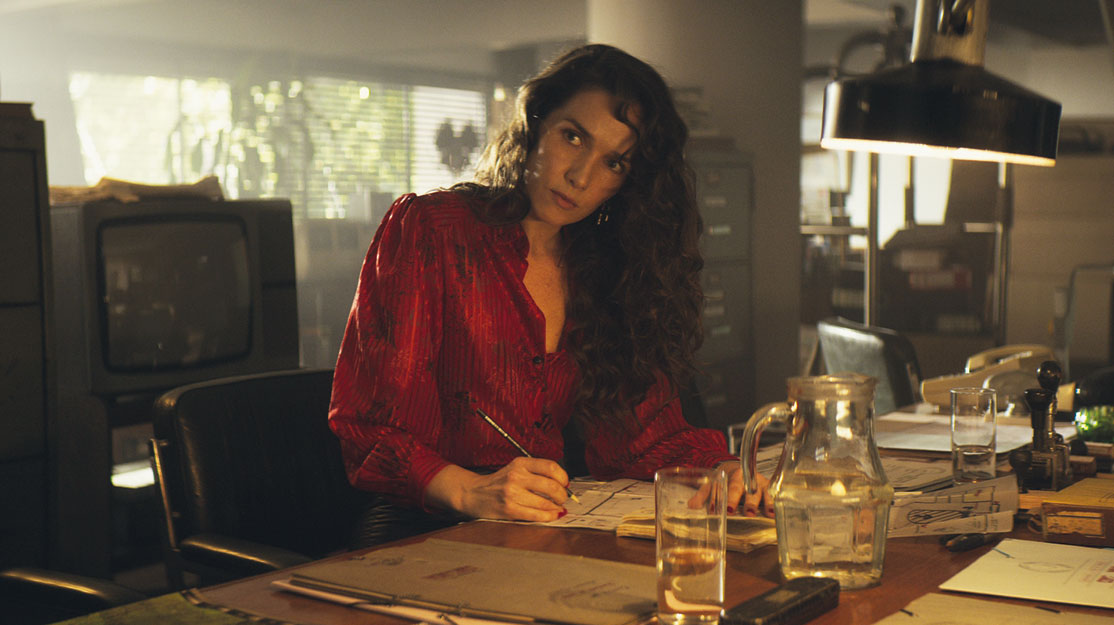 As movie directors continue to move to TV, Denmark’s Lone Scherfig and Argentinian filmmaker Daniel Burman discuss working for the small screen and the challenges they faced along the way.

As feature film directors, Lone Scherfig and Daniel Burman are regular visitors to the Berlin International Film Festival. In 2019, Scherfig’s The Kindness of Strangers opened the annual event, after she won the Grand Jury Prize in 2001 for Italian for Beginners and An Education screened in the Berlinale Special section in 2010.

Burman similarly won the Grand Jury Prize for El Abrazo partido in 2004, while his films Derecho de familia (2006) and El rey del Once (2016) were both selected to open the Panorama Special section.

This year, however, both directors returned to Berlin as part of the event’s Berlinale Series section, which since 2015 has highlighted some of the most exciting new television series from around the world.

Danish filmmaker Scherfig presented her medical drama Ellas vagt (The Shift), which stars Sofie Gråbøl (Forbrydelsen) as Ella, the head midwife working in a busy maternity ward. As her close-knit team goes about their work with conviction and fine ideals, the pressure and the enormous mental and physical strain it places on them pushes them to the limit.

Meanwhile, Burman, from Argentina, screened Iosi, el espía arrepentido (Iosi, The Regretful Spy, pictured above), which is inspired by real events and tells the story of a young spy named José who infiltrates the Jewish community in Buenos Aires under the code name Iosi. However, he unwittingly paves the way for two terrorist attacks, and years later tries to bring the real culprits to justice.

During the festival, Scherfig and Burman spoke about their respective moves into television, their collaboration process and the challenges they faced along the way.

Why did you decide to make a series?
Burman: I don’t feel any different if I’m making a series or a film. The only real difference is the price I pay in my personal life and how much time I have to sacrifice with my children. If I’m working on a film, it takes much less time. But in the special case of Iosi, the hero’s journey is so long and so stretched that it would be much harder thinking of it in terms of a single film.

Scherfig: In a way, a series has more in common with a novel [than a film]. You can make more digressions and you don’t have as strict demands on the structure. With The Shift, I have tried to really be in favour of unpredictability, where the series itself or the characters go in directions that might not have been ‘correct’ in terms of traditional dramatic plotting. It has been tricky but it has also given the show a voice of its own. Most of the other TV series I have worked on as a director have been quite traditional in their structure.
Now I’m back to feature films, where you know the audience needs to have the cards you are going to play quite early on for the setups to pay off before the film is over. They are two different disciplines. For our series in a maternity ward, I couldn’t have imagined it as a feature film unless you had one story or it took place over a shorter time span. We do have one plot that could have been a feature film, and that comes from the fact it’s what I was taught [at film school].
But it’s been fun to work with more people, have more directors, be more collaborative and do something where you can fine-tune it once you see footage coming in. When you do a series, you shoot for so long that you can calibrate a little as you go. We are already working on a new season and I’m trying to find out what it is I learned that we have to do better next time.

How is making a series a more collaborative process than a film?
Burman: It’s very interesting to compare making a series and a film. Everyone should have the opportunity, after they turn 40, to make a series because it’s a whole learning process in letting go of your ego. On a film, a lot of it is centred on your ego. When you make a series, you learn to be part of a whole. In this case, I had the pleasure of co-directing with Sebastián Borensztein, who I learned a lot from to make the collaboration perfect.

Scherfig: The series I have loved the most throughout the years have been auteur-driven, where there is a really strong writer and a strong visual identity, some bold stylistic choices and often even the same director throughout.
If you want to copy that and ensure the series you’re doing is not washed out in the process, it helps to be quite outspoken with what the concept is. Illustrate it and insist on talking more about it than you would if it were a feature film, where you may not have to communicate as much because there are fewer people involved.

How did you develop your series?
Scherfig: The scripts were pretty much finished before we started shooting. I definitely intend to do that again, rather than shooting when you don’t know what’s going to happen later. It’s far better logistically and it also enables you to take bigger detours. Actors can interpret scenes in a different way because they know where their character is going. We can sometimes decide to paint a wall because we know we won’t see a certain room again.
Søren Balle directed the first three episodes, Ole Christian Madsen directed the next three and I concluded the series, which was partly to give me more time to be the head writer while they were shooting. That also made me curious in terms of what would they bring to the table that I should try to preserve [in my episodes].
Now that we’re looking at a second season, I know to let in decisions that are not mine and maybe to be less in control than I would have been had it been a feature film. But it’s not something I would advise. If a younger director asked what’s the trick to making television series, I wouldn’t say, ‘Don’t be in control.’ You have to work really quickly, make fast decisions and try not to shoot something that’s not going to make it in the final cut. You have to think and work fast, take the right chances and make the right compromises. Experience definitely helps.

Burman: Making a series is like shooting a bullet with a very long path. You know where it has to go, but there are still many opportunities for you to take it one way or another, even though you’re always following that one long path. After you see the finished product, you think, ‘Wow, the probability of things going wrong here was almost infinite,’ so at the end of the day, you kind of regard it as a miracle.

What kind of challenges did you face?
Burman: When I got home after a long day of shooting, if I was asked whether I would prefer to eat meat or pasta [for dinner], I would be incapable of making a decision because my capability to make a decision had dried up.

Scherfig: I can sit in my car on the way back from the studio, look out the window and think that people on the street are extras. TV drama derives more from radio drama and sitcoms, whereas films have more traditional imagery and a closer relationship to dreams.
The audience would like series that are more stylised and have a convincing, believable, original identity. It’s super hard to do that on a very tight schedule, so eventually we may find that if we get more time to perfect our craft and bring in people who can do cinema and not just television, it’s better for everyone.
I hope we’re in a place now where everyone will think it makes sense to give better resources [to television], because the quality immediately lifts on days when you have just a little more time or start shooting a little faster. Immediately, you feel the quality increasing. It’s tough for people to go home and feel like, ‘Ah, we could have done so much better with just a little more time.’

Burman: It comes back to the great work of the ego. As a director, you think, ‘If we shoot this scene three or four times, we will reach that point I’m trying to reach,’ but it’s something you have to balance and maybe even sacrifice just so you reach the end. Sometimes it’s not just about my ego trying to find the perfect shot but to let go and keep going.

What do creators need to help them succeed?
Burman: Trust, because if there’s no trust in HODs [heads of departments] and their staff, and if these people don’t trust other staff, nothing good will come out of it. Everything is centred on trust.

Scherfig: If you trust the writers, they will work with less insecurity and bring back something more bold and original. Having creative space and creative licence makes people work fast and effectively while still being inspired and still having the feeling that if they deliver something that is better than expected then someone will pick it up and it will end up in the series. Motivation has a lot to do with trust as well. It also makes the whole process a lot nicer.