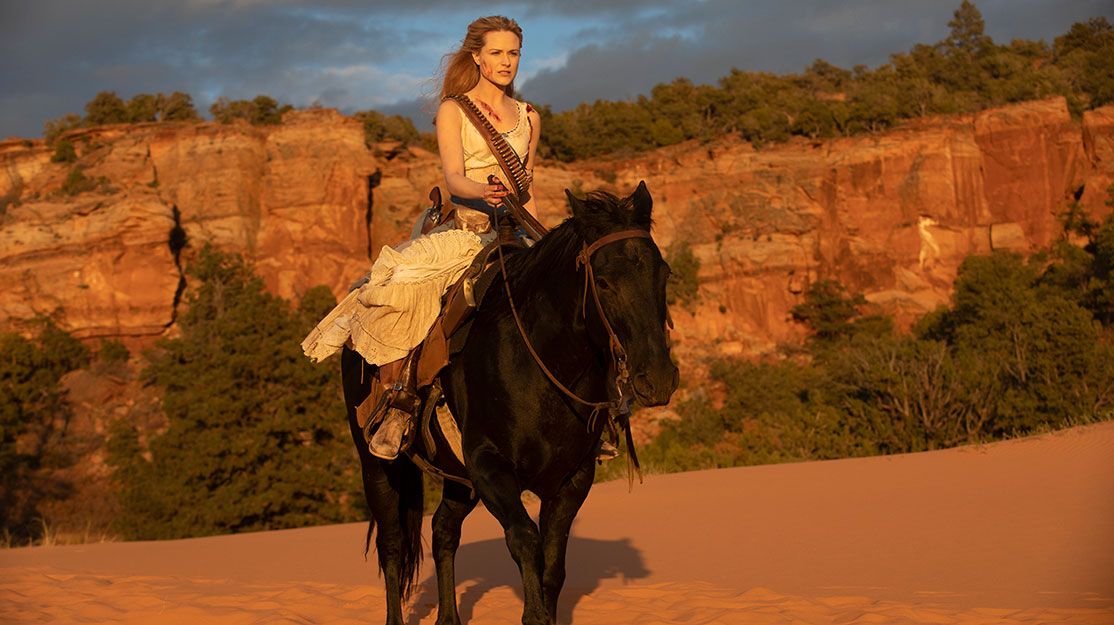 As season two of HBO’s Westworld draws to a close, co-creators and showrunners Lisa Joy and Jonathan Nolan discuss making the series, rebooting the Western genre and their fascination with the mind-bending themes at the heart of the drama.

With overlapping timelines, dozens of characters and a premise built on mysterious and complex technology, Westworld might seem a daunting proposition for the more casual TV viewer.

Set in a colossal Wild West-themed amusement park for the super-rich, where guests’ darkest desires are fulfilled by hyper-realistic android ‘hosts,’ the HBO series has demanded its audience’s full attention from the start, trusting viewers to keep track as the rug is constantly pulled from beneath their feet by a succession of twists and reveals.

Among the many surprises of season one, the most significant was perhaps the revelation that two main characters – William and the Man in Black – were in fact the same person, depicted at two different ages.

Season two, the finale of which aired on HBO in the US last night and hits UK screens on Sky Atlantic this evening, has kept the intrigue flowing, exploring the newly sentient hosts’ quest for freedom while simultaneously taking viewers deeper into the origins of the park and its key characters.

It has also revealed the existence of at least two more parks run by the shady Delos corporation, with a British India-based location referred to as The Raj and the previously-hinted-at Shogun World, set during the Edo period of feudal Japan.

Lisa Joy, co-creator and co-showrunner of Westworld alongside husband Jonathan Nolan, admits there is “a lot of complexity” to the show’s “puzzle-like structure” but adds that, this time around, the show has “played the timeline stuff cards up.”

“Each season, the questions that we tee up, we do try to have an answer for all of them. We do intend to answer the questions we set up,” says Joy, whose previous TV credits include Pushing Daisies and Burn Notice.

Nolan, who has worked with his brother Christopher on blockbuster movies such as Interstellar and the Christian Bale-led Batman trilogy, adds: “We do this in part because it’s the kind of show we would like to watch, which is why it’s layered and complex.”

He compares Westworld’s weaving narrative to the film noir structure. “You start at the end and then figure out the way to the beginning. And you have the classic noir protagonist in Bernard [Jeffrey Wright], who has forgotten something important.”

It’s an approach that has at times made it necessary to withhold information from the cast – which includes big-name stars Sir Anthony Hopkins, Evan Rachel Wood, Ed Harris, Thandie Newton and James Marsden – to “keep the story as fresh and present for them as possible.”

Ahead of season one, even acting royalty like Hopkins, who plays Westworld co-founder and park director Robert Ford, reportedly had to battle to get access to complete scripts. Wood, meanwhile, was largely kept in the dark over revelations about her character Dolores, a host who exhibits different personalities throughout the show.

“We didn’t really tell Evan anything, as we wanted her to be sort of stranded in her character’s situation, guessing what the larger story was,” Nolan says.

For season two, however, the tables were turned, with Wood being given a clearer picture of the overall story while Wright – whose character, Bernard, discovers late in season one that he is not human but a host based on the park’s other co-founder – was tasked with reacting to developments along the way.

“This season we sat down with Evan and laid out the story; for Jeffrey, we explained we weren’t going to tell him anything,” Nolan reveals.

Joy adds: “We’re lucky enough to have this tremendous cast and crew who I think are as invested in protecting the story and their character arcs as we are. So it’s actually not that hard to keep things under wraps, as we have such wonderful collaborators.”

The Wild West-themed park in which much of the action plays out sees Westworld straddle the dual genres of Western and science fiction. And while it might seem a curious combination, it’s not without precedent, following in the footsteps of the short-lived but hugely popular series Firefly as well as movies Back to the Future Part III, Cowboys & Aliens and, of course, the 1973 Westworld film on which the show is based, written and directed by Jurassic Park novelist Michael Crichton.

“We were fascinated by the idea of this moribund genre,” Nolan says of the Western element. “The most terrifying part of launching the show was that half of it was this dead genre. Even when Crichton wrote the original film, the Western period was on its way out.

“But I think for him and for us it’s a genre that is so consistent; its rules are so simple. There are some phenomenal movies and they all have this underlying structure, which is an investigation of good and evil, free will. It’s a fascinating genre.”

“The idea of good vs evil is really quite binary – the black hat and the white hat – and what we’re trying to do is delve deeper and deeper into character, and eventually you see that everything is shades of grey,” says Joy.

The Western setting also allows for some stunning cinematography. Much of the exterior shots in the show, produced by HBO Entertainment, Kilter Films, JJ Abrams’ Bad Robot Productions and Warner Bros Television, are filmed in Utah, making use of awe-inspiring locations such as Castle Valley to illustrate the enormous scale of the Westworld park.

The expansion this season into Shogun World, meanwhile, saw Nolan and Joy draw inspiration from Akira Kurosawa, the celebrated Japanese filmmaker known for such titles as Seven Samurai. “We had a lot of conversations about what the look and feel of that should be,” Nolan says. “We were riffing on Kurosawa, so we went back and looked at all of his films to see if there was a signature film stock or a signature aspect ratio, anything we could play with. Kurosawa was restless; he moved back and forth between black and white and colour, he moved back and forth between different aspect ratios.”

This led to increased experimentation in filming methods, with parts of Westworld being shot on anamorphic film. “When you use anamorphic lenses, your bokeh and your focus roll off in a very beautiful way and it just has a totally different, very beautiful texture to it,” Nolan explains.

The showrunner adds that the different techniques are used to suggest to the audience that things aren’t quite what they seem. “By the finale, you realise that that’s our gentle way of putting you in a virtual space,” he notes.

What proved most attractive to Nolan and Joy, however, was the opportunity to explore the themes inherent in a show about androids gaining sentience, particularly free will and the implications of artificial intelligence.

After Abrams had come to them with the idea of remaking Westworld – initially as a film before later suggesting a TV series – Nolan says the pair realised it was “everything we’re interested in and everything we’re talking about right now, in terms of artificial realities and artificial intelligence and consciousness, and human nature, which I’ve always been fascinated by – memory and morality and all this stuff that we’re made of. Looking at it from the perspective of a set of creatures made in our image was just kind of irresistible.

“My point on artificial intelligence is I’m not really sure why anyone would be writing about anything other than artificial intelligence right now. [Star Trek creator] Gene Rodenberry would be very disappointed we’re not already there, but it does feel like we are stumbling into it a bit now. I think we’ve just got a few years left until AI shows up and tells us to stop writing about it!

Westworld, distributed by Warner Bros Television Distribution, also examines free will from the point of view of both the hosts and the humans, with several episode titles referring to philosophical concepts relating to free will, and the question of whether it truly exists for anybody.

Season one finale The Bicameral Mind takes its name from a term coined by psychologist Julian Jaynes, who proffered the idea of two separate minds within every individual – one that gives instructions and another that performs them. Jaynes discussed how consciousness comes from breaking down the wall between the two by exposing the individual to new stimuli.

And tonight’s finale is called The Passenger, alluding to the notion that the conscious mind is just that: a passenger in a vehicle being driven by the subconscious, to which we are all slaves.

Nolan’s position is unequivocal. “As far as we can tell, free will is an illusion,” he says. “If you think about the beginning of The Simpsons, where Maggie has the little fake steering wheel, that’s consciousness. Marge is at the wheel; we don’t get to talk to her. We’re Maggie, looking out the window and imagining we’re making the decisions – and most of the empirical evidence suggests that we aren’t.”

Joy adds: “Humans can be reduced to some rather elementary building blocks. When you start to think about the drives that humans have, sometimes we find that we are maybe simpler than we thought, more manipulable.”

Profound stuff, and viewers can expect more in season three, which received the green light soon after the second run’s premiere. The ending of season two teases the prospect of major changes to come, with the show poised to spend more time outside its amusement parks.

“One of the things we’re excited about is the third season is our world, and we now have the fun-slash-terrifying challenge of building out what the real world looks like,” Nolan says.

Quashing any suggestion that the pair are making it up as they go along, Joy reveals that she has had an ending in mind since day one. “When we were writing the pilot, I pitched a scene to end the entire series on, and so far we have not deviated from liking that scene. As a writer, you never want to tempt a smiting from the TV gods, so I would never venture to guess how many seasons we will live for. But I do think there are tentpole moments we are trying to work towards, and hopefully we will reach our ending in the time we have.”