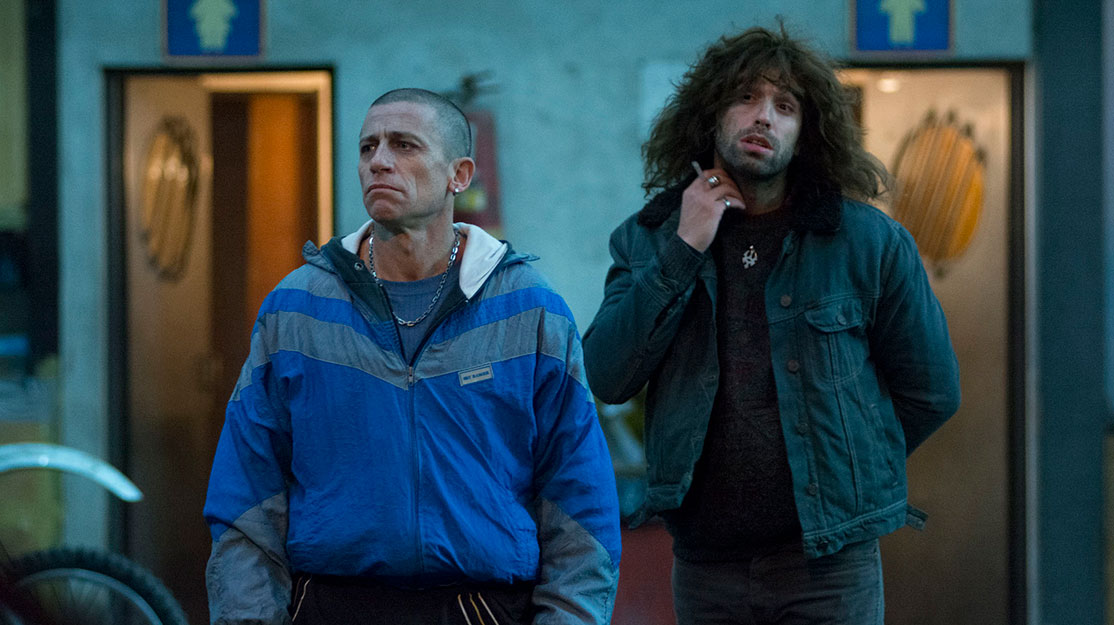 Writer Germán Maggiori and director Pablo Fendrik tell DQ about Argentina’s Entre Hombres (Amongst Men), an unflinching miniseries based on a cult novel in which a senator tries to recover a video of a compromising encounter.

When Germán Maggiori’s novel Entre Hombres (Amongst Men) was first published in Argentina in 2001, it won prizes before disappearing from view against the backdrop of the economic crash that hit the country that same year. But over the next decade, it found fame as a cult hit, eventually getting a new publisher and a second life.

Among its newfound fans were the team at HBO Latin America, who sought out Maggiori to discuss dramatising his novel for television. Almost two decades after the book was first released, he is now behind a bold, unflinching four-part adaptation written alongside co-writer and director Pablo Fendrik (El Asaltante, HBO’s El Jardín de Bronce) that is due to debut across the region this year on HBO and HBO Max.

“The book was a slow grower,” Maggiori tells DQ. “It won a prize in 2001 in Mexico. When I received the prize, I thought it was the start of something big and my career as a writer would be great. Then I came back to my country and it was the worst moment to release a book like this because the economy crashed three or four months later and the book went unnoticed.

“It survived because of the fans and it was rescued by my new publisher in 2013, and this was the beginning of a new life. HBO was interested in the novel and the rest is history.”

Maggiori was excited to return to the novel’s characters and setting to bring the story to TV. “Pablo helped a lot of course,” he adds. “In the end, I think it was a wonderful experience.”

“It was great teamwork. It was a really fluid adaptation,” says Fendrik. “We did it in like three months during the summer, a year prior to principal photography. I was very happy doing this collaboration with Germán because he understood so well and so quickly what it is to write a script. And the opportunity for me, as a director, to have the author of the original material working [with me] on this new approach to the original material was the best scenario.”

Fendrik believes it was his destiny to direct Entre Hombres, having first read the book with a view to directing a film version in 2014. However, the rights were already wrapped up elsewhere, so Fendrik moved on to other projects. But a year later, he got a call from Diego Andrasnik, production director at Buenos Aires-based Pol-Ka, who asked him if he wanted to collaborate on another HBO series.

“When we started working together, we got along and he mentioned one day, ‘You know, I’ve got a project I would really like to for you to direct. I got the rights,’ and that rang my bell,” the director recalls. “I said, ’Is it Entre Hombres?’ and he replied, ‘Yeah, that’s it.’ I said, ‘OK, so I definitely have to do that.’ Diego already had the idea of making it into a four-episode limited series and we took it from there. A year later, Germán and I were introduced and we started work.”

Maggiori backed the decision to turn his novel into a four-part miniseries, believing a movie-length running time would have meant omitting plot points and characters he felt were essential to the story. As a result, he says, the series is a very faithful adaptation.

“I started writing scripts a year before HBO [came on board] but it was just a way of exploring it,” the writer says. “It was challenging but I felt comfortable working with Pablo because he was passionate like me. We worked without any problems. To me, there’s no difference between writing a novel and writing a script. At the end of the day, it’s writing. I love writing fiction; I don’t care what the format is. I’m not the kind of writer who prefers TV or something like that. If you have a good idea and a world to show, the format isn’t important.”

Fendrik picks up: “We did work on the structure a little bit and made some changes to make it easier for the viewer. The book goes back and forth and has different points of view. I thought it would be too confusing for audiences, so we simplified that a little.”

The director found plenty of inspiration in the book, describing it as “the kind of material you dream of.” Alongside capturing dark settings and using a muted colour palette, he decided to pay homage to the 1990s setting by replicating the filming styles of the period.

“Filming was painful because it was in the middle of winter and we were shooting on the outskirts of Buenos Aires, where we were looking for very bleak, dusty and very hostile locations. The hostility that shows in the frame, we had to find that and live with it.”

“It had a special and different atmosphere, like another country,” Maggiori says of the’ shooting locations. “Pablo caught the spirit of this place. I saw the 1990s in the series and it was wonderful. Pablo had that ambition and he is the only one who can do that.”

For his part, the writer says his work finished when the scripts were completed, noting that he didn’t want to “bother” Pablo with his ideas for how the series might look. “That’s because I am confident he has everything in his mind and I believe in the way it will be done,” he explains. “It is better to stay away from the director and not contaminate him with my views. In this kind of world, it’s the best thing to do, not to bore the director with stupid details.”

Entre Hombres is now the first Argentinian show to be selected for Berlinale Series section of the Berlin International Film Festival, which begins today. With a cast of larger-than-life characters played by stars including Gabriel Goity, Nicolás Furtado, Diego Velázquez, Diego Cremonesi and Claudio Rissi, the Spanish-langauge drama will have its premiere tomorrow.

“It’s like a UFO, not only compared to Argentinian standards but Latin American standards,” Fendrik says of the series. “I don’t want to say it’s the best thing or better than others, it’s just very different. Because the source material was already pretty wild, to make an adaptation from Germán’s novel was already a pretty bold move. Once we were all on board, we knew it was going to be something special because the original material is something special.

“It’s a wild ride and the singularity of it is pretty unique. It takes you to a world that is so unique, so specific, in this very specific place and time. Nothing compares to it.”

The Berlinale premiere will also serve as a high-profile platform for shows coming out of the region, which like the rest of the world has been hit hard by the pandemic. Maggiori says Argentina has been “devastated” by Covid-19, as well as economic problems, but he is hopeful its TV industry will pick up again this year.

“I’m still working, but for studios and producers in Mexico and the US. Here, the situation is pretty complex,” he says of his homeland. “I hope [it will get better], because we have really talented people. It’s important for our country to restart making every kind of show. A lot of people depend on it.”

Like elsewhere around the world, productions held back in 2020 are now battling new series for cast, crew and studio space.

“Now everybody’s trying to shoot at the same time,” Fendrik says. “It’s becoming an issue because there are not enough resources or people. The industry is not that small but it’s not that big either. Platforms are greenlighting things randomly, almost, and it’s a moment to try to make the best possible choices, not to just greenlight something that is hollow entertainment and nothing else. It’s the same for each one of us – me as a director, Germán, DOPs, writers and actors. It’s a very interesting time.”