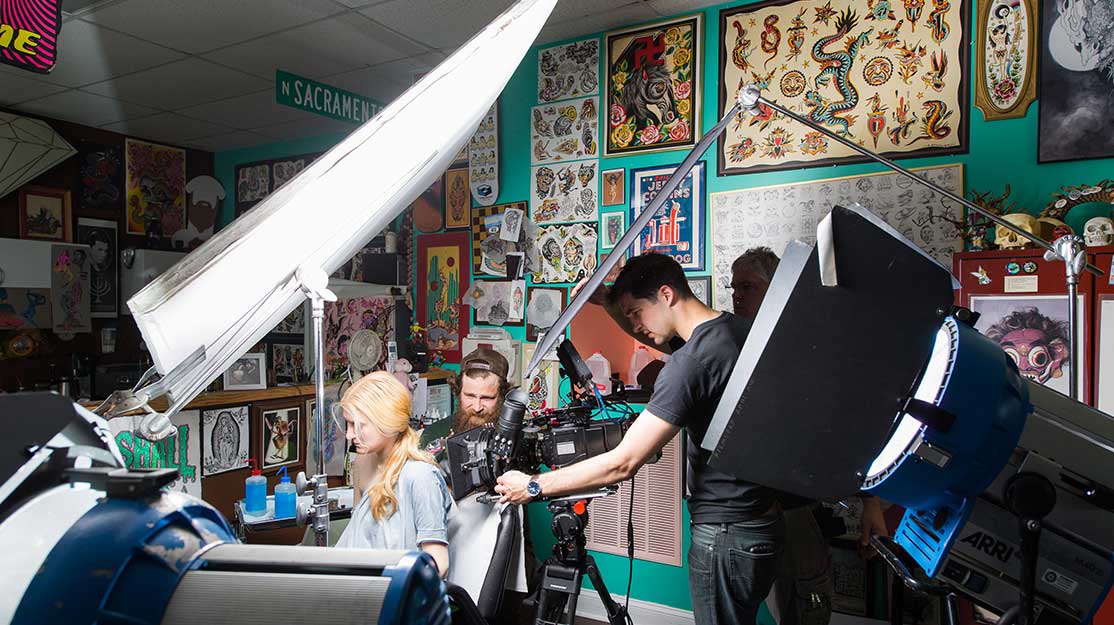 The makers of  TNT crime drama Animal Kingdom and creative director and designer Erin Sarofsky discuss the creation of the show’s title sequence and reflect on the importance of such openings to drama series.

When it comes to the style and tone of a television drama, one element can set the scene before a word of dialogue is spoken or a character walks into shot.

From Breaking Bad and Mad Men to Game of Thrones and Orange is the New Black, the opening credits of a series can become as iconic as the shows they precede. But what is the creative process behind bringing these title sequences to life?

Erin Sarofsky, director of Chicago-based design production studio Sarofsky, designed the credits for Showtime series Shameless in 2011 – a 30-second film that introduces lead character Frank Gallagher (William H Macy), passed out on the floor, and the members of his family via a static camera placed in a corner of a bathroom.

So when John Wells and Jonathan Lisco, the executive producers of US cablenet TNT’s drama Animal Kingdom, and Jinny Howe, head of television at John Wells Productions, set out to choose a designer for the main titles of this daring family crime drama, they knew exactly what they were getting.

Wells had also executive produced Shameless, and five years later he sought to rekindle his relationship with a designer whose studio has worked on four Marvel blockbusters – Captain America: Civil War, Ant Man, Guardians of the Galaxy and Captain America: The Winter Soldier.

“The Shameless main title couldn’t be more different than what we were attempting with Sarofsky for the Animal Kingdom main titles,” Wells says. “Shameless is playful; and it tells a very specific story about all the individual characters, while warning viewers that they’re in for a raucous and ribald hour. In contrast, through images, the Animal Kingdom main title prepares the audience for the violent, amoral and virile world they will encounter in this show.”

Animal Kingdom is described as a family crime drama that centres on 17-year-old Joshua Cody, who moves in with his relatives in their Southern California beach town after his mother dies from a heroin overdose. It isn’t long before he’s pulled into their life of excess and indulgence, before realising it’s being funded by crime.

The series is based on the 2010 Australian film of the same name stars Ellen Barkin, Scott Speedman, Shawn Hatosy, Ben Robson, Jake Weary, Daniella Alonso and Molly Gordon, with Finn Cole as Cody.

Sarofsky explains: “John and Jonathan really understand the root of what makes their series special. They emphasised that it’s more than just a complicated family drama, describing how the humour, the Oedipal complex underlying their relationships, the complexity of each individual character and the tension, love and co-dependency they all share impacts all aspects of their lives.”

By way of a brief, Sarofsky and her team were given 60 seconds to set up these relationships, interspersing slow-motion shots of a tattoo being inked with images of surfing, skateboarding, skydiving, bodybuilding and fighting – against the backdrop of a pulsating soundtrack by Atticus Ross.

The surfing footage was provided by the show, leaving a 30-strong crew to collect the rest of the imagery from shoots in Chicago, Miami and LA across seven days of production.

“For every show, the main title serves a different purpose,” Sarofsky says. “The show creator is usually the driving force behind the title sequence and can use it in a variety of different ways. Some use them for very specific reasons, like to help establish characters or firmly set the series in a specific place. Others prefer to use them to set the tone of the series.

“I like it when a main title dives a little deeper and acts as a metaphor for what you’re about to see. It’s much more big-picture and doesn’t get into specific plot – it just puts the viewer in the right headspace.”

The tattoo sequence was shot at Chicago’s Brown Brothers Tattoo, where owner Marshall Brown showcased his work on camera using an extra who agreed to get inked after replying to a Craigslist advert.

“The prop list was also the most bizarre thing of beauty you ever saw,” Sarofsky notes. “Fishing hook, meat grinder, handcuffs, road flares, crib with round bars, red popsicles, Ducati and so on.”

Speaking about filming the tattoo sequence, director of photography Mike Bove adds: “Shooting high speed is always fun, no matter the subject, but it was particularly intense to see the needle going in and out of the skin and the ripples it produced. It all fit very well with the creative tone we were going for.”

It was then down to editor Josh Bodnar to bring 20 hours of original footage down to just 60 seconds. ”Some of my favourite sections are where Erin and her team affected the footage with a grainy, ‘stumble’ effect,” he says. “This combination of techniques really aids in transitioning from the tattoo world to the future and the past. The texture of the footage really helps convey feelings of danger and life in menacing ways.”

Sarofsky – whose TV work also includes title sequences for Necessary Roughness (USA Network), The Playboy Club (NBC) and The Killing (AMC) – believes it is important that she feels a connection to the show she is working on.

To determine this connection, she asks herself four questions: “Do I like it? Do I want to see more? Am I interested in the characters? Am I compelled to become immersed in this space/place/time? If the answer to all of those is yes, I dig deeper into the details of what interests me specifically about the show.

“There is quite a bit of overlap between shows these days, so it is really important to figure out what makes the series unique. Then you build concepts from there. The actual visual look usually comes shortly after the concept is solidified.

“We work very closely with the creators and producers. It’s our job to make sure they are getting something that represents their series. They are the ones who created, wrote, cast, built and produced the show, so it’s really important that they are happy with the final piece.”

Title sequences are changing, however. Where Game of Thrones spends several minutes taking viewers around a shifting 3D map of Westeros, many other dramas now prefer to use a simple five-second title card before picking up the action.

“The title cards have been a reaction not to a creative aesthetic, but to a business imperative,” notes Wells, whose credits include ER, The West Wing and Southland. “As viewership becomes increasingly splintered, ad-supported television has responded – mistakenly, in my opinion – by increasing the number of commercials. With more commercials, the pressure has been on reducing the length of shows and the main titles came to be seen as expendable, to the detriment of the programmes that follow.”

He adds: “TNT and (network president) Kevin Reilly have committed to reducing the commercial time and allowing us almost eight minutes of additional airtime. I believe main titles serve an important purpose in setting the proper tone in the viewer’s mind for the show that follows. You’ll notice that non-advertising-supported distribution systems all continue to utilise full-length main titles in some form. It is not coincidental that these non-advertising supported shows are considered to be the highest-quality programming on television.

“Advertising supported networks need to follow TNT’s lead in understanding that viewers are demanding more story and less commercial time, because the ever-growing number of commercials and ever-shrinking portion of narrative, including the main titles, on many networks has made the storytelling experience far less enjoyable for audiences.”