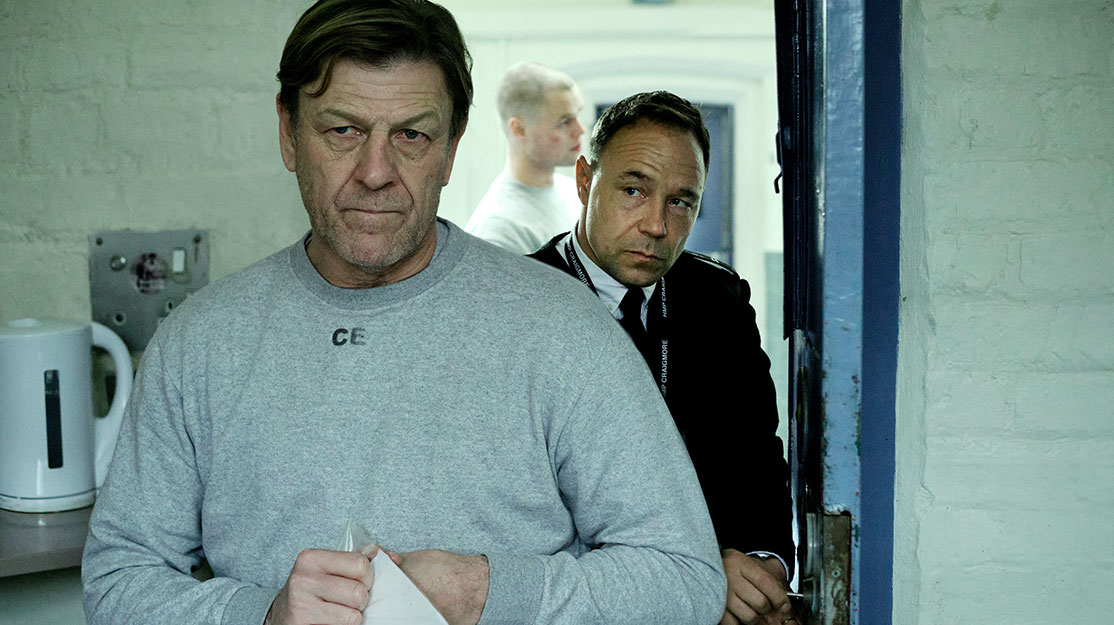 Bafta-winning writer Jimmy McGovern and executive producer Tom Sherry tell DQ about partnering with stars Sean Bean and Stephen Graham on Time, a prison-set drama in which an inmate and an officer contemplate guilt and forgiveness.

For his latest series, Bafta-winning writer Jimmy McGovern has reunited with stars Sean Bean and Stephen Graham for a story about guilt, forgiveness, punishment and penitence set inside a British prison.

Three-parter Time sees Bean play Mark Cobden, a teacher, husband and father who kills an innocent man in an accident. Facing up to his four-year sentence, he has no idea what to expect behind bars and finds he must quickly learn how to survive. Meanwhile, Graham plays Eric McNally, a prison officer who faces an impossible choice between his family and his principles when one of the prison’s most dangerous inmates identifies his weakness.

Known for writing both characterful, often issue-led drama (Care, The Street, Accused, Moving On) and dramatisations of real-life events (Hillsborough, Sunday), McGovern says it was “the Catholic in me” that led him to want to tell a story about atonement and a man stuck in prison facing up to the events that led him there.

“Those flashbacks keep on coming and Mark sees them as part of the atonement process, and then he realises they’re not, they’re just a constant reminder that you need to atone,” McGovern tells DQ. “But how do you atone stuck in a prison, locked up 23 hours a day? There’s nothing you can do to atone but you still need to. Then the Stephen Graham story is always one I love. It’s a man who will do anything, anything at all for his family, and is called upon to do it.”

“Mark is somebody who made a mistake that he could have avoided but will regret forever more,” continues executive producer Tom Sherry. “Eric’s story is about somebody who makes a decision that was outside of his control and ultimately, yes, we all have choices, but sometimes the choices are so equally flawed that you can’t win. That was an interesting parallel in terms of what the two characters find themselves doing.”

As his personal officer, Eric builds a relationship with Mark that is particularly notable for the fact that Eric is an honest and caring guard, unlike many of the familiar authoritarian figures seen in other films and television series set in prison.

“The more research I did, the more I was constantly looking around for bad prison officers,” admits McGovern. “I’ve never been in prison. I’ve visited lots of prisons in my life and done lots of workshops there, but I’ve never been in there as an inmate. But I was constantly looking out for these bad prison officers and didn’t see one. They all seem to be pretty decent people trying to do the best they can.”

For Sherry, that meant the series could offer up a fresh storytelling dynamic and challenge misconceived perceptions of prison guards.

“It makes it more engaging to go, ‘Actually, they are good people in a difficult set of circumstances,’” he says. “And similarly, Mark is ultimately a good man who has made an unforgivable mistake. We didn’t want to show a career criminal but show an everyman. Mark represents that as well.”

McGovern believes Time also stands out from other prison dramas by the number of scenes spent inside Mark’s cell, rather than in communal areas or the canteen. “I don’t know of any British prison in which that actually happens, but it’s constantly shown on the screen: people sitting down in the canteen and eating,” he notes. “In reality, they take the food to their cell, one person would sit on a bunk and the other guy sits on the lavatory and that’s how they eat. So an awful lot of our stuff takes place in cells, probably a lot more than in typically American prison dramas.”

In the hands of another writer, characters like Mark and Eric might have had their stories play out in another setting. But it was McGovern’s particular interest in the power struggles within prisons that led him to set the miniseries in that particular environment.

“If you’re being picked upon in prison, the only way to stop being picked upon is to tell a prison officer. But if you tell a prison officer in a British prison you’re being picked upon, you’ll be picked upon even more,” he states. “There is no way out of it, so that’s the fascination of the ordinary life in a British prison. You do not grass. This guy Mark is a teacher, he’d never use the word ‘grassing,’ but this is a lesson he learns very early on that you simply do not grass. You cannot grass, you cannot inform, you cannot put your hand up and say, ‘I am being mercilessly persecuted here.’ You cannot do it. He has to sort it out for himself.

“I’m constantly fascinated by what happens if a big man takes your food. I’ve written that quite a few times and we see an element of that in Time. A big man simply comes along and takes Mark’s food. What does he do? He cannot put his hand up and tell somebody.”

Sherry describes prison life as a “world within a world,” a complete society where everything you need exists behind the high walls and towering gates. “There are many of them in almost every big city around the country and yet most of us don’t know about it,” he says. “It’s a world we don’t get to see. This was a really fascinating opportunity to see how you can boil society down to a very distilled and small, contained environment and then see how it operates.”

McGovern says he has carried the story of Time with him for a while, writing the series over the course of two years as his initial plans for a six-part series were whittled down to the final, leaner, three-episode format.

“The best advice I’ve ever heard is if you want a great five-parter, commission six and throw the first one in the bin,” he reveals. “Often the first episode in any drama series is always a waste of space.” He also jokes that very little of his time in his office is spent writing, likening it to a striker in a football match who might touch the ball for 30 seconds in a 90-minute game.

“Years ago, I did have set hours,” he recalls. “I would start work at 9am and finish at six. These days I’m getting lazy and tired. I do come into the office in the morning and leave it in the early evening, but in the course of that, God knows what happens. I check emails, I’ve got a lovely lawn. When I should be writing, I’m tending that lawn. I do all the things I shouldn’t do.”

The writer previously worked with Bean and Graham in his anthology series Accused, in which each episode follows a different character as they await their verdict in court, revealing the story of how they got there. They both appeared in an episode called Tracie’s Story, in which teacher Simon (Bean)’s transvestite alter ego Tracie becomes entangled in a dangerous love triangle involving Tony (Graham). Both actors have also appeared in other McGovern series, Graham in The Street and Bean in Broken.

“I just love working with the pair of them,” he exclaims. “If you look at an actor, what you want to see is humanity. I don’t think there’s any actor in the country with more humanity than those two guys, and the older they get, the more you see it. They have lived their lives. They’ve sunk a few pints, you can see it and they are so human. That’s what I love about them. The two of them are technically absolutely brilliant. But they have humanity written in every crease of their faces. That’s the thing I like.

“There is an irony that the two of them have played tough guys lots of times, really hard men, real tough guys, but their best work is when they’re vulnerable. They are just so moving when vulnerable.”

As executive producers, both actors also supported the production behind the scenes, with Graham particularly involved in casting. Their co-stars include Siobhan Finneran (Happy Valley), Sue Johnston (The Royle Family), Hannah Walters (This is England), David Calder (The World Is Not Enough), Nadine Marshall (Small Axe), Michael Socha (This is England), Aneurin Barnard (Dunkirk) and Jack McMulllen (The First Team).

“They both cared passionately about making sure this piece happened and they knew their involvement and their commitment to the project would ultimately improve its chances of happening,” Sherry says. “When we were going through the problems of Covid and rescheduling and all of that, having them there not just us as actors but as part of the production gave them an opportunity to show their investment in us.”

Produced and distributed by BBC Studios, the series was gearing up for pre-production in March last year when plans were put on hold as the UK went into its first lockdown, leaving the production team to reschedule the 12-week shoot for later in the year. Filming did eventually start in Shrewsbury, where scenes in the prison wing and Mark’s cell were shot, before the cameras moved to Liverpool to create the rest of the prison with a mash-up of courtrooms, police stations and education buildings.

“At one stage Jimmy told me he’d written a piece that’s just set in one location, so what’s my problem?” Sherry says. “But there’s a lot more to it than just one place. And the reality is that there aren’t many prisons available because they are being used. Obviously, because of Covid, we couldn’t go anywhere near those. When we did various prison visits and spoke to officers, there’s so much more to it than the Porridge-type version, which is just a cell and a wing. That was something we wanted to include in the piece, so finding that was quite a challenge.”

But filming during the pandemic was “quite unlike any other filming experience I’ve every been through,” admits Sherry, BBC Studios’ head of drama north. “It was really tough, I won’t deny it. Filming is normally problem-solving on the hoof and a collective team effort. This took it to another level in terms of what the problems were. Thankfully, we had a brilliant script, unbelievable cast and the best crew I’ve ever worked with. If we didn’t have those elements, we would have found it far harder.”

Speaking to DQ ahead of the BBC Studios Showcase that will launch the series to international buyers before its BBC1 launch later this year, McGovern pitches Time as a gripping story that speaks to the human condition.

“That’s no reflection on the genuinely kind-hearted, spirited souls who are trying to run the prison,” Sherry says. “Siobhan Finneran’s character is a great element of this story as an individual trying to make a difference, and we do see that in the story. Anybody watching it couldn’t help but be moved by the emotional journey we take, not just with our lead characters but with some of the other characters as well. I would hope that anybody watching it would see that.”