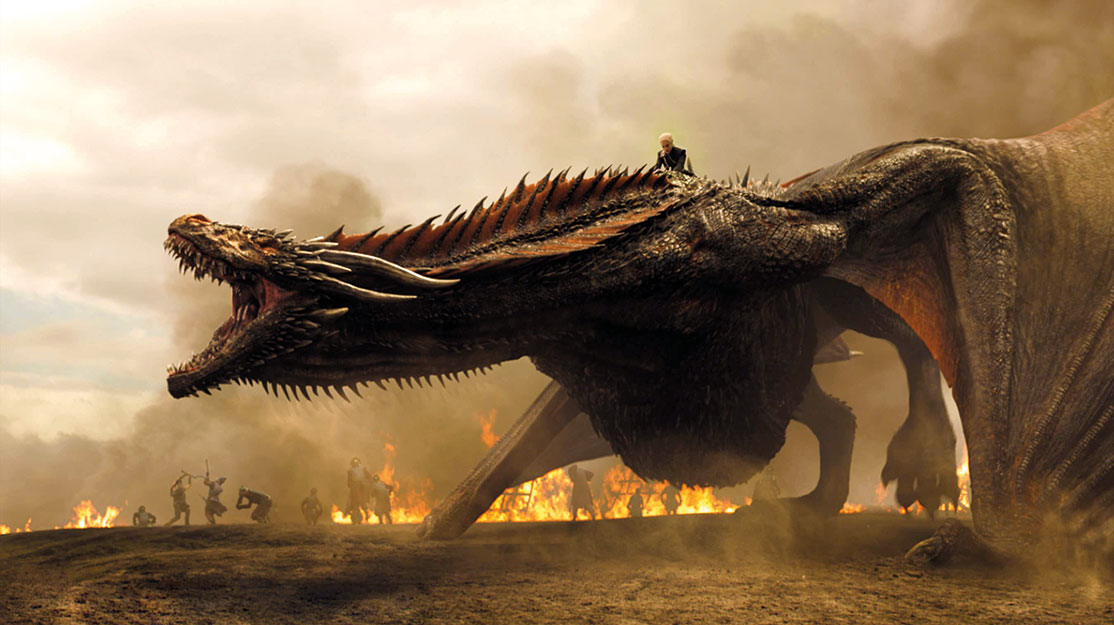 As visual effects become a more prominent – and expensive – part of television, DQ hears about how writers and producers are aiming to meet cinematic standards in high-end dramas and how VFX can enhance storytelling.

Until recently, visual effects (VFX) in television series were a luxury rather than the norm. But the advent of epic shows such as HBO’s dragons- and magic-infused fantasy Game of Thrones has changed the paradigm in terms of what programmes can offer and, perhaps more importantly, what audiences now want from their high-end dramas.

Game of Thrones (pictured above), which came to an end this week, has employed numerous high-profile VFX firms over the years, including Primetime Creative Arts Emmy-winning teams at German firms Pixomondo and Mackevision. With this stamp of quality comes an obligation for VFX outfits to continuously improve the quality of their work. “It doesn’t matter if they’re playing Call of Duty, in the cinema or watching Netflix on their phone, audiences expect it to be of the highest quality,” says Richard Scott, CEO and co-founder of UK-based Axis Studios.

It’s a point picked up by Louise Hussey, executive producer at the UK arm of Lucasfilm-owned VFX outfit Industrial Light & Magic, who says VFX, a “longstanding part of film,” are fast becoming integral to TV. Hussey joined the company in 2018 to set up ILM TV, the company’s new London-headquartered television branch, having previously done the same for fellow VFX firm Double Negative (DNEG).

“We still don’t have the budgets that feature films have, but the fact we can harness a lot of the technology and development that’s been going on within film and bring that to bear in TV VFX is really key. That’s why we’re driving forward on all of those fronts, with creative and tech at the minute,” she says.

While conceding that the US is more advanced than the UK in this space, Hussey believes the shift from cinema to TV – in terms of both consumer habits and the migration of talent – is being felt domestically and globally. While projects she had been looking at during her tenure at DNEG had been “very much constrained by the budgets that were available,” the upswing in the popularity of series, fuelled by premium drama on streamers like Netflix and traditional broadcasters like the BBC, has helped open the coffers for VFX. And off-screen talent has benefited as much as viewers.

“What’s incredible is the ambition of the storytellers and the ability writers now have to put things down on paper – that actually there is a chance [their ideas] can happen. Instead of writing themselves into a budgetary corner, they’re able to have a vision,” Hussey continues.

The forthcoming BBC adaptation of HG Wells’ classic sci-fi novel The War of the Worlds is a case in point. The miniseries, coproduced by ITV Studios-owned Mammoth Screen and Creasun Media in association with Red Square, uses VFX to complement the drama. Peter Harness, who penned the adaptation, says that although writers are “hard-wired into [thinking about] what things cost,” and therefore manage expectations on the page, he still prepares a first draft unfettered by budgetary constraints because it galvanises VFX teams to consider his vision from the outset.

“You are making a statement about the scale you are aiming for, even if you can’t afford all of it,” he says. “It’s quite helpful for people to get that and be a bit terrified by it and start thinking about how these things can be achieved.”

Harness reveals he already had an image of The War of the Worlds’ “iconic” Martians in mind, adding that conversations with director Craig Viveiros, designers and effects producers early in the process helped achieve the spectacle he was going for, removing the threat of eating into the budget with false starts.

“One of the biggest wastes of money is not having enough time or doing things on the fly. With The War of the Worlds, the one thing that didn’t change from script to script was the big effects sequences,” he explains. “We said, ‘We’re locking these so people can start building effects, storyboarding, looking at locations.’”

However, Harness admits the production did end up having to go without one effects sequence it had storyboarded, meaning he had to think up a scene with “the same impact for no money at all.” It became two people walking down a smoky road and hearing a baby crying in an abandoned house.

“I actually think it’s the most horrifying sequence in the [drama], and we basically got it for the cost of a smoke machine and a sound effect,” he says. “Budget constraints force you to be more creative.”

Rory Aitken, co-founder of management and production company 42, which is behind the recent BBC/Netflix animated adaptation of Richard Adams’ seminal novel Watership Down, says there was a “huge focus on getting the script right,” and notes the tensions between TV drama and captivating visuals. Given the steep costs of producing animation, Aitken says the whole process of making the series was turned on its head.

Dan May, co-founder of UK design studio Painting Practice alongside Joel Collins, says art departments and VFX teams often enhance a series that is renowned for its writing. Painting Practice was the driving force behind the look and effects of the first 13 episodes of Charlie Brooker’s sci-fi anthology drama Black Mirror, on which May served as VFX art designer. The series had initially apportioned very little for visuals but as its popularity grew and it became a Netflix show with higher budgets, VFX progressed as a key part of its fabric and USP.

“Often, Joel and I will work from the very beginning to get the visuals to go with the writing and the script, to get the project greenlit,” May says. “Then we’ll do a lot of concept art to get people excited. We’ll feed those concepts to the writers, and some of that will go into the scripts, some of it won’t. Then you go into production but you’ve got a lot of that pre-planning done.”

UK pubcaster Channel 4’s recent cyber-thriller Kiss Me First required constant interaction between VFX teams and producers from the start. The series, produced by UK prodcos Balloon Entertainment and Kindle Entertainment, tells the story of a 17-year-old girl who is addicted to a fictional online gaming site, and combines live action with computer-generated sequences set in a virtual world. Axis Studios was brought on board at pilot script stage because of its previous work with the gaming industry.

“We essentially fed our animation process into the writing process; the scripts were being developed at the same time we were boring out sequences,” Scott says. “Some of the sequences were established as being animation, and we could start working on those while the rest of the script was evolving.

“We were working on the animated sequences, designing the world, the costumes, and they hadn’t shot a single frame of live action. We did motion capture with all the actors and it was the first time they’d ever acted together. It was an upside-down production from that perspective.”

Clearly, VFX has transitioned from its perennial associations with fantasy and the big screen and is now being implemented as a tool in numerous premium dramas. As budgets continue to fuel its uptake in television, the migration of audiences from the cinema to the living room is likely to speed up.