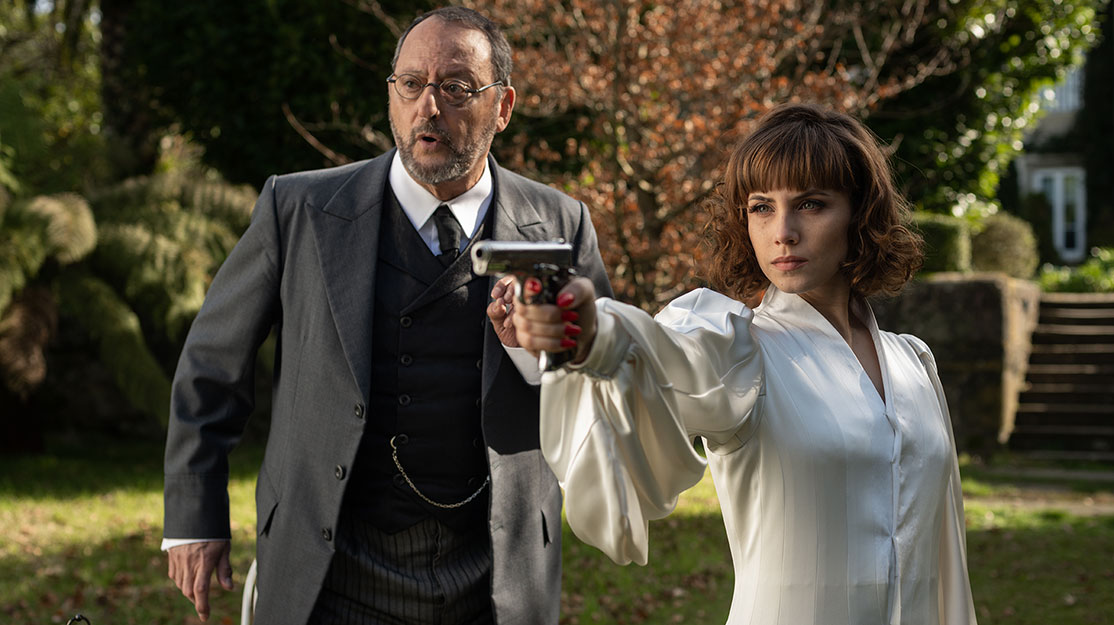 French film star Jean Reno talks DQ through some of the big themes in his upcoming television series All Those Things We Never Said, in which he plays an android giving a woman a second chance to build a relationship with her father.

An international star for almost 50 years thanks to roles in feature films such as Léon, Ronin, Mission: Impossible and Godzilla, French actor Jean Reno is enjoying a bumper year in 2022.

As well as his distinguished film career, Reno is no stranger to the small screen, with credits including crime drama Jo, action comedy Die Hart and a guest appearance playing himself in French comedy-drama Dix Pour Cent (Call My Agent). And now his resumé has been further bolstered by no fewer than three new dramas airing this year.

In May,  Quién Mató a Sara? (Who Killed Sara?) entered its third season, with Reno joining the cast of the Mexican mystery series. It stars Manolo Cardona as a man determined to uncover the truth after spending 18 years in prison for murdering his sister, a crime he did not commit. Pero Azul produces the series for Netflix.

Launching this week on Prime Video, meanwhile, Spanish drama Un Asunto Privado (A Private Affair) takes viewers to 1940s Galicia, where Maria Quiroga (Aura Garrido), a daring young upper-class woman, sets out to hunt the serial killer who has been stalking the city for months. Standing at her side is her faithful butler Hector (played by Reno), and together they must overcome the obstacles standing in their way, not least the resistance from the new police commissioner. The series is produced by Bambú Producciones.

Still to come is All Those Things We Never Said, streamer StarzPlay’s first French coproduction in partnership with StudioCanal. Based on the novel by Marc Levy, who writes and showruns the series, the bittersweet comedy-drama introduces Julia (Alexandra Maria Lara), whose estranged father Michel (Reno) dies just days before her wedding.

As she turns her attention from marriage plans to funeral arrangements, she discovers her father has one more surprise in store when she takes delivery of a life-sized android, a carbon copy of Michel, containing the memory of her father and a battery life of just seven days. To make up for lost time, he suggests a road trip together that will take them from Paris and Madrid and Bruges to Berlin as they embark on a journey of second chances.

Taking time out of his busy acting schedule, Reno was one of the star guests to appear at the Monte Carlo TV Festival earlier this year in order to promote the series. DQ caught up with the actor in Monaco to hear about his latest work.

Why did you decide to appear in a Spanish series?
I am of Spanish origin. I was born in Morocco. My parents were from Andalucía and I was born in Casablanca, but I am French. I realised that when I wondered where I wanted to be buried. It wasn’t scary question – it wasn’t about death, but about the definition of your history. I decided it would be in France.

I’m French but my mother tongue is Spanish and I learned French when I was five. But I’ve always been linked to the Spanish-speaking world and, during Covid, my agent said, ‘I’m talking with a production team from Spain. They want to write a character for you, a butler.’ So there we were during Covid filming in Galicia, a region I hadn’t been to before.

After that, Marc Levy, who I’ve known for eons, called me. I spend months sitting next to my telephone waiting for it to ring, and then other times it rings all the time. Then I did Who Killed Sara?. The projects I have taken into consideration next are feature films. I hope people go back to the theatres [after Covid].

Would you like to return as an android like Michel in All Those Things We’ve Never Said?
I’m against going back in time to change a life. Life has been lived. I don’t want to have to live it all over again and remove the scars I’ve got and all the sorrows. I don’t want to imitate that god or entity. I like the idea that I’m imperfect. [My android character] is perfect, he doesn’t eat or sleep. This guy is faultless. Do I want to be more handsome than I am? Ask my wife, perhaps. The person I want to see in the mirror is myself.

What did you think about the theme of the story – of having a second chance with your children?
There’s a show called Supernature by Ricky Gervais, where he talks about going back in time to kill Hitler in his cradle. If you listen to what he says [about the repercussions of changing history], that’s precisely what I think. The android part of the series, I pushed it out of my mind to begin with. You just remove that from your mind. I was saying to myself, ‘That’s the funny side of things.’ That humour can make the story more acceptable.

What was your relationship like with your own father?
Are there things I wish I’d said to my father? If you see me in front of you today, it’s because he didn’t say things and also because he said things. That’s the question I had in my mind when I read the script. ‘Did you speak with your daughters enough?’ The answer is they’re still calling me, they’re still visiting me, they’re still saying ‘I love you’ and I’m still telling them ‘I love you.’ That’s the answer.

You cannot evaluate the quantity of words to tell your daughter. Maybe to be there at the right moment, that’s the answer for me, rather than saying enough words, giving enough warnings, enough ‘don’t do thats.’ No, just be there. My father didn’t speak a lot, he didn’t show me gestures or tenderness but, at the same time, he built me.

Do movies and TV series have the power to change the world?
Have movies changed my life? Financially, yes! Not my life but the way I see the world? Yes. The way I see my friends? Yes. People will change me more than movies. I only want movies to be my work and not my therapy. I’m afraid of that. That’s why I prefer real life, real relationships, as opposed to relationships through stories. I do not want films to change my life. They can help me to understand myself but not change my life. That would be way too much. I’m just an interpreter.

What’s the key to learning languages?
The first thing to do when you learn a language is to listen to music. There’s the vocabulary, the verbs and how to conjugate the verbs, but listen to the music and the intonation. Then you’re well at ease and you’ll carry over the emotion.

tagged in: All Those Things We Never Said, Jean Reno, StarzPlay