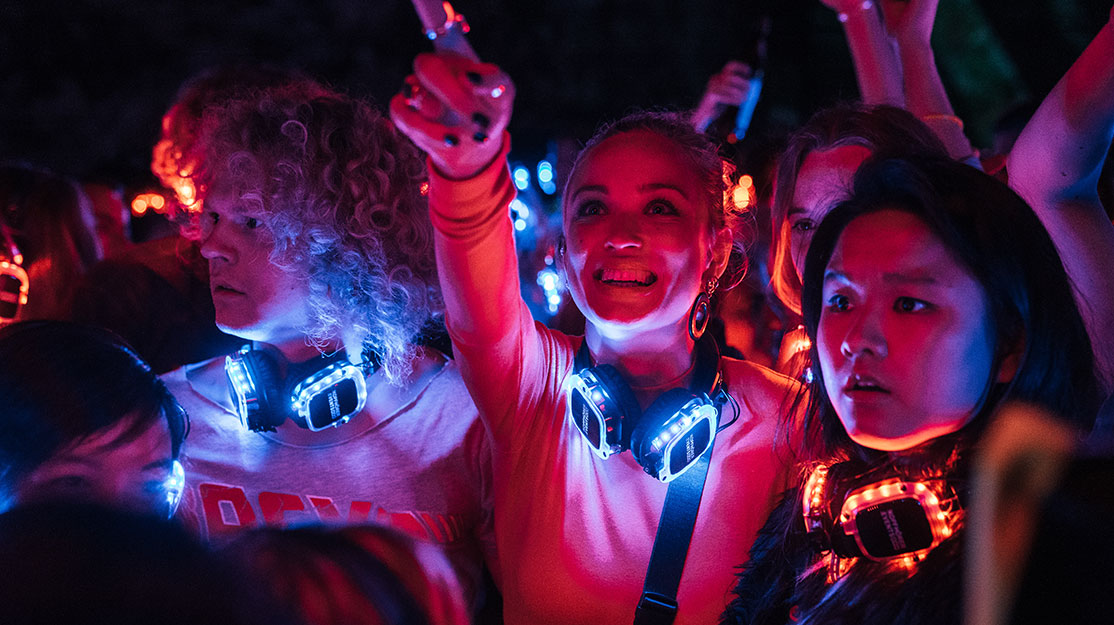 Since moving to LA, German writer and director Christian Ditter has helmed movies including How to Be Single, starring Leslie Mann and Rebel Wilson, and the Lily Collins-led Love, Rosie. He was also a producing director on Netflix original series Girlboss, which led him to pitch the streamer an idea for a thriller about biohacking.

Ditter grew up as a fan of Jurassic Park and Westworld creator Michael Crichton’s books and movies, as well as films from Steven Spielberg’s Amblin Entertainment, the company behind titles such as ET and Gremlins. They informed his first movies in Germany, which he describes as kids’ adventures like cult classic The Goonies.

But it was after talking to some scientist friends that he struck on the idea behind six-part Netflix series Biohackers.

“I asked them, ‘What is it that keeps you awake at night? Is it is it artificial intelligence taking over the world?’ And they said, ‘No, that’s long gone. Synthetic biology is the next big thing that’s really interesting.’ And I had no idea what that was,” Ditter tells DQ.

“I knew the term, but I didn’t know what it was or what you could do with it. I wasn’t even looking for a topic for a film or show, it was just out of pure interest. Then I found it stayed with me and I couldn’t stop thinking about it.

“I came from the theme of synthetic biology to biohacking because that’s a really fascinating aspect of it. Stuff that, 10 years ago, you could only do in super-high-security labs 10 stories underground, people can do now at the kitchen table if they have the knowledge. I thought this was fascinating and scary at the same time.”

Marking Ditter’s showrunning debut, Biohackers mixes themes of friendship, love and revenge, asking what would happen if students were secretly experimenting with biohacking technologies that could change humanity.

At the centre of the story is the rivalry between two women: Mia (Luna Wedler) is a medicine student, while Professor Tanja Lorenz (Jessica Schwarz) is a famous bio-scientist and lecturer.

College freshman Mia enrols at Freiburg University’s prestigious medical school, but her interest in revolutionary biohacking – where people implant computer chips, sensors and other tech into their bodies – is not just academic. Her goal is to gain the trust of star lecturer Lorenz, knowing they are connected by a dark secret.

To shed light on the mysterious death of her brother, Mia enters a dangerous world of illegal genetic experiences. When she meets genius biologist Jasper and his brooding roommate Niklas, she is forced to decide between her principles and her feelings, between avenging her family and protecting her new friends.

“I wanted to have a character with a strong agenda and a strong personal agenda,” Ditter says of Mia. “I wanted a main character who takes things into her own hands. She needed a strong motivation. I wanted her to be like the Terminator: she never stops, no matter what gets thrown in her way.

“I also wanted her to go up against a big opponent, somebody very powerful who is hard to reach. Mia has a strong personal agenda to go up against this professor and we ultimately have two characters following their goals. But at a certain point, there comes a threshold for Mia where she has to decide, ‘Is this next step really worth it to follow my goals, or do I back off in order to do the right thing?’ The two characters have different answers to that question. The interesting parts happen when one of the characters makes a move the other one – and the audience – didn’t anticipate. That’s where a lot of the fun comes from.”

After Ditter finished working on Girlboss, Netflix asked him what he wanted to do next. The streamer was in the market for more German-language series, or shows set in Germany, following the success of sci-fi series Dark, and executives there picked up on Ditter’s interest in biohacking. They commissioned a pilot script and a series bible, and then set up a writers room with Nikolaus Schulz-Dornburg, Tanja Bubbel and Johanna Thalmann, who wrote episodes four, five and six. Ditter penned the first three.

He says there’s very little dramatic licence in the series when it comes to the science featured, with everything in the show either being done in labs already or being developed. “The only thing we did take creative licence with is a timeline, because if you do synthetic biology, it takes years and years of failure until you succeed,” Ditter notes. “But content-wise, we had a lot of scientific advisers on board all the time. What’s so interesting about the subject matter is nobody knows about it.”

Ditter took his showrunning cues from Girlboss creator Kay Cannon, describing his experience leading Biohackers as a “jump into the deep end of a swimming pool.” But having written movies on his own, he was buoyed by the collaborative nature of the writers room that allowed him to throw ideas around. The challenge came when pre-production began with only two scripts written, meaning he had to juggle running the room and his directing duties. He helms the first three episodes, with Tim Trachte shooting episodes four to six.

“Some of the things you run into during prep, like locations, also inspire the writing,” he says. “For example, some of the more crazy biohacks like the bioano, a plant-based bio piano, we saw on location recces when we were visiting the labs of real biohackers. I could integrate that into the writing because I just was standing in rooms like that while I was prepping.

“My life is easier when I have somebody like Kay who was great and writes things you can just take and direct. But since Biohackers was my own show, I had a very strong idea of how it should feel and look. I liked the fluidness of the situation, that you could take ideas from location recces and casting and bring them into the writing.”

Ditter admits he often imagines particular actors in roles as he’s writing them, and it just so happened that his preferred options for both Mia and Lorentz ended up joining the show, which is produced by Claussen+Putz Filmproduktion.

“I had seen Luna, who plays Mia, in a movie the year before and thought she was fantastic. I didn’t say, ‘OK, she has to play it or nobody else can,’ but it was always in the back of my head that it would be great if she did,” he says. “Then we offered her the part and she wanted to play it.

“For Professor Lorentz, we had different versions of her in writing. When I started to think about casting, I know Jessica as a music television anchor years and years ago. I started to think she would be really interesting for the part, and that informed the writing. It was a little bit more targeted towards her. We offered her the part and she took it immediately.”

Most of the production took place in Munich, where Ditter lives when he’s not in LA. Mia’s apartment was built on the backlot at Bavaria Film Studios so the exteriors could be shot without the use of backdrops. The cast and crew also spent a week in Freiburg to capture exterior scenes around the university that serves as the setting for much of the drama.

Following the launch of Biohackers last month, Ditter says it has been interesting to watch how different people respond to the story. “Different people watch it differently, and everybody sees what they have inside themselves, which I find fascinating,” he says. “The best thing I could ask for is if people ask themselves, ‘How would I have handled this situation? What is the choice I would have made?’ What I find interesting is if it gets people thinking. That’s all I can ask for.”

Despite viewing figures being a closely guarded secret at Netflix, enough people have already watched Biohackers for the show to earn a second season, with filming beginning on another six episodes last Wednesday. Fans will be particularly pleased at the news, given how Ditter openly admits he chose to end season one on a “big cliffhanger” without any confirmation whether he would be allowed to finish the story.

“We didn’t know that we would get renewed. It was just a shot in the dark,” he says. “It would have been very frustrating for audiences if we didn’t get renewed, so we are very thankful Netflix pulled the trigger. We had some ideas for where season two might go when we were writing season one, but season one was our focus and we have a massive question mark at the end, which we will answer now in season two.

“If not enough people are watching the show, then it doesn’t really matter if it ends in a frustrating way. And if enough people see the show, which is happily the case now, then that means enough people wanted to see what goes on and then they’ll find out anyway. But it was a risk, absolutely.”

Amid the Covid filming restrictions put in place by the production team, Casarotto Ramsay-repped Ditter says season two will be a more intimate story, with the scripts also avoiding scenes featuring large crowds, such as those shot inside packed lecture theatres or at student parties.

“I find that [approach] interesting creatively, but it also helps the production environment, obviously,” he says. “Let’s see how it goes.”