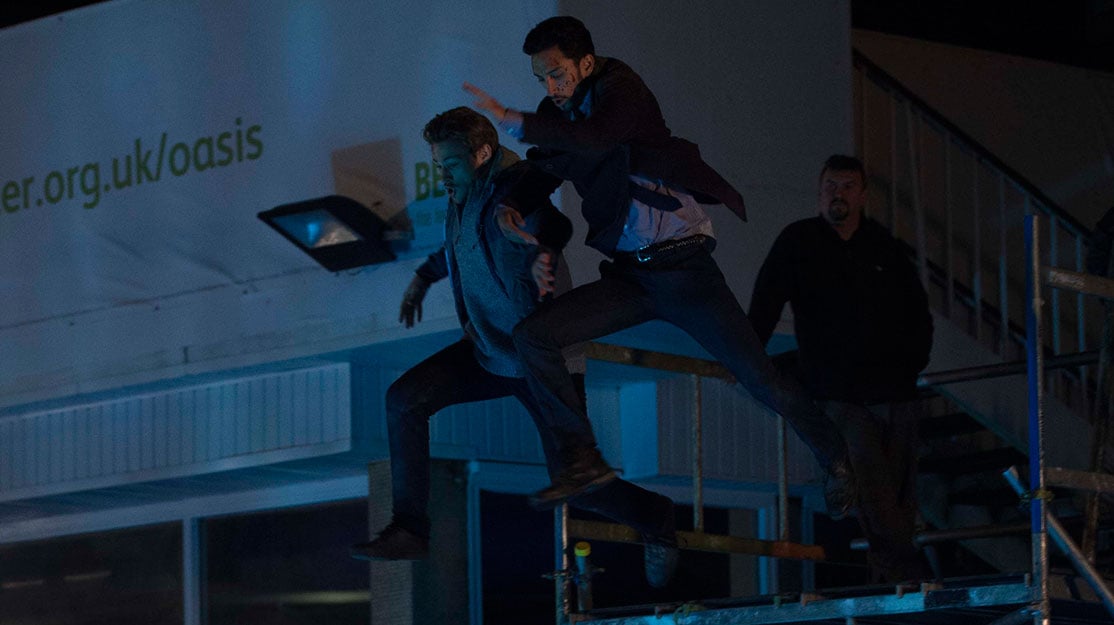 Eleventh Hour Films executive producer and head of talent Eve Gutierrez reveals why one scene from BBC drama New Blood gave her cause to hold her breath.

There’s one on every production – that one scene that embodies the spirit of the entire show. A moment so key that it will often dictate the selection of director and HoDs [heads of departments], and set a precedent for how the whole shoot will be executed. A scene that starts with meticulous planning and preparation, allocated just the right amount of money and time in the production schedule, soon inspires an unexpected determination, a bloody-mindedness and finally a full-blown obsession in the entire cast and crew.

On New Blood, our investigative series for BBC1, the scene in question acted as the climax of the characters’ first case. It sealed the friendship between the two lead characters and (literally) pushed our two relatively inexperienced actors into free fall.

On the page, creator Anthony Horowitz made the scene feel simple: just two characters, a few lines of dialogue – and a jump. As the action played out on the rooftop of a London hotel, it was clear this scene was anything but simple, requiring the characters to jump into the hotel’s swimming pool more than a dozen floors below.

It’s surprising how few outdoor pools there are. Even fewer of which are anywhere that would visually feel like London and fewer still that are next to high-rise buildings. In fact, it turned out there is only one – the pool at the Oasis Sports Centre on Tottenham Court Road. And, luckily for us, they were open to the idea of us shooting in their pool at night.

Obviously we would not be asking stunt performers or actors to actually jump off an incredibly tall building and free-fall in to a pool below, so it was clear from the outset that we would need not one location but two. The pool would provide the landing moment but the rooftop and POV of the pool would need to be achieved somewhere else.

Our production base in Dagenham, at LondonEast Business Park, provided a rooftop of the right height and shape to shoot the dialogue part of the scene against a green screen and for our stunt team, helmed by stunt coordinator Tony Lucken, to cheat an impressive jump over the side of the building onto a mountain of boxes. And with the magic of visual effects from VFX supervisor Sascha Fromeyer, we were well on our way to building an impressive sequence.

All that was left was the need to shoot our two actors plunging into the pool with enough force that it was believable they had jumped from a great height – to achieve the ‘Butch Cassidy and the Sundance Kid’ moment that encapsulated the relationship between our characters.

Just two things lay between us and the successful completion of our scene, and neither were elements that we could control or influence. The first was the weather. Rain would most definitely stop play. The folk at the Oasis Sports Centre were very clear about that – and the forecast was for intermittent showers all day and all night.

The second was the fact we would be shooting in a location right next to Waterloo Bridge in the afternoon before moving over to Tottenham Court Road to access the pool after it had closed to the public, on the same evening of the Million Mask March when supporters of hacking collective Anonymous were due to march from Trafalgar Square to Westminster. At the very least, gridlock was predicted, with the media speculating on whether there would be chaos and violence on the streets.

For most of the afternoon, I paced about in the rain, alternating between the weather app on my iPhone and Twitter for news of what was happening on the march.

Finally it was time to move the unit, and it was here that transport captain Andy Blackburn and his team of drivers came into their element. I’m a born-and-bred Londoner, but their pre-planned route of back roads managed to make even me dizzy. It got us clear of the march, across the river and through Soho in 20 minutes – just as the clouds parted and the rain stopped.

Our director, Anthony Philipson, and the camera team headed up by DoP Rasmus Arrildt were prepped and set in record time. The grip department had built a tower for the actors to safely jump from, the underwater camera was in place and we all collectively held our breath as our actors were counted down to jump from what felt like a great height…

There was a big splash but, to our horror, they both immediately floated to the surface. On camera it looked like they had barely broken the line of the water, let alone plunged to the depths that would sell a jump from an impossible height. It turned out that both the wetsuits the actors were wearing under their costumes and the costumes themselves floated.

The actors immediately shed the wetsuits (luckily it was a freakishly mild November night) whilst the costume department hacked into their clothing to try and remove anywhere that pockets of air could gather. And with just moments to spare, we were reset to achieve the all-important shot – and it was miraculously ‘scene complete.’