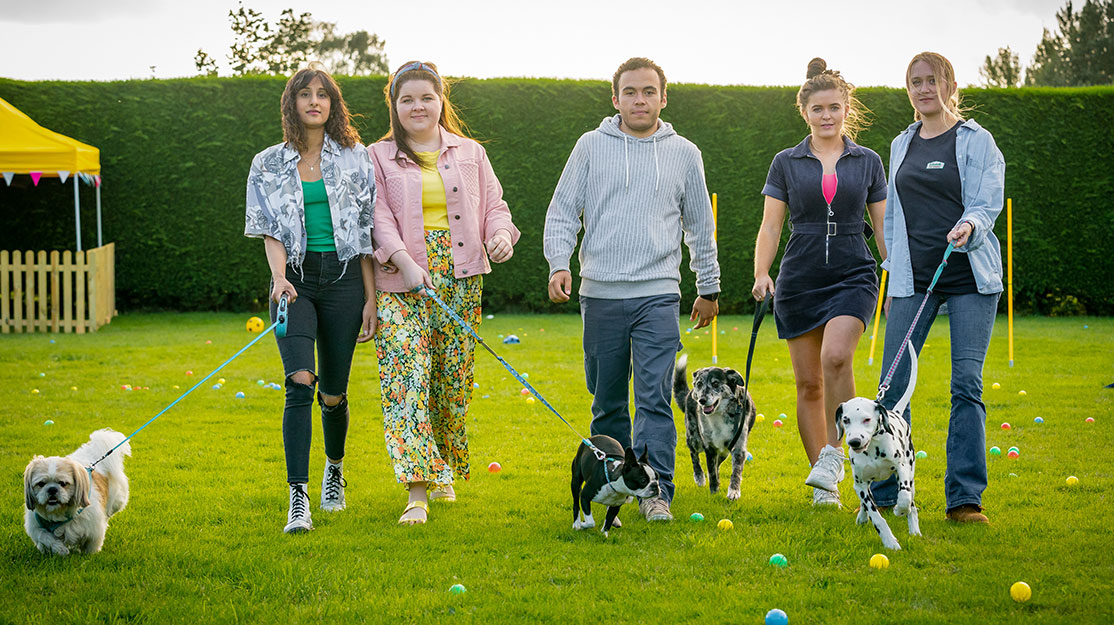 As Kay Mellor’s lottery drama The Syndicate returns after a six-year break, the writer and director tells DQ how the BBC series overcame the odds to film in Yorkshire and Monaco during the Covid-19 pandemic.

For someone who has become a regular fixture in the schedules thanks to drama series such as Band of Gold, Fat Friends, Playing the Field, In the Club and The Syndicate, it seems remarkable that Kay Mellor has been away from television for the last three years.

But ever since her last series, Girlfriends, aired on ITV in 2018, the writer and director has pursued her other love, the theatre, penning a musical version of Fat Friends that completed a UK tour and then taking Band of Gold to the stage.

“I had an ambition to write a musical and that took up an awful lot of time,” Mellor tells DQ of adapting Fat Friends for the stage. “It took a lot of brainpower to begin to understand musical language but I worked with the glorious Nick Lloyd Webber [son of musical impresario Andrew Lloyd Webber] and learnt a hell of a lot. We did a big show and we toured the country. I absolutely loved it. There’s something immediate about an audience that’s right there – you have access to them and you know what’s working and you know what’s not. Song and music is so powerful.”

Band of Gold followed as a play, before a meeting at the BBC with controller of drama commissioning Piers Wenger and chief content officer Charlotte Moore rekindled an idea to resurrect her lottery drama The Syndicate, which originally ran for three seasons until 2015. Each season introduces a new group of friends or co-workers as they scoop a life-changing jackpot, with each character facing different consequences as a result of their sudden change in wealth.

For the fourth season, however, Mellor proposed turning that format on its head by having the winning lottery ticket stolen.

“It was going to be [a group of] hairdressers in Hull, but [the BBC] had just had a show on about hairdressers and beauty so they didn’t want another one like that,” Mellor recalls. “They said, ‘Does it have to be hairdressers, Kay?’ And I said, ‘No, it doesn’t.’ I’d recently got a dog, so I said it could be a syndicate of kennel workers – and I could see their eyes light up. I got excited about it and they got excited about it, and it was born.”

True to Mellor’s word, The Syndicate returns to BBC1 with a group of kennel workers – Keeley (Katherine Rose Morley), Jake (Kieran Urquhart), Roxy (Taj Atwal), Gemma (Liberty Hobbs) and Colette (Emily Head) – at the centre of the story. When they discover the business is being sold and they might be out of a job, their futures are thrown into doubt. Winning the lottery might be their only lifeline, so when they check their numbers and the machine goes off, they are ecstatic. But further investigation reveals newsagent Frank (Neil Morrissey) might not have paid out all their winnings, leading them on a cat-and-mouse chase across Yorkshire and to the luxury surroundings of Monaco.

Mellor says the format twist came out of a desire to explore how money changes people, noting that under normal circumstances, Frank would never have kept the winnings for himself.

“But once you start talking about big money and a change of lifestyle, it can really make you do things that are not normally in your nature to do,” she says. “Similarly, if you feel like you’ve been robbed of something that’s rightfully yours, that can make you do something as well. If Keeley has got massive debts and seriously believes she’s won the lottery then what would she do? And what if Frank has that ticket and, in that split second, he can either say, ‘You’ve won £27m’ to Keeley or ‘You’ve won £500.’ It’s a split-second decision – and then you’re on a rocky road.”

Writing the season, Mellor maps out the storyline across all six episodes before sitting down to draft the first script. “I have to know sort of where I’m going,” she says. “Then I sometimes change it, but I have to have a roadmap or else I end up going to the wrong country. I tell episodic stories within the structure, and there’s always this cat-and-mouse thing going on. Will they get the ticket? Will they get it off Frank? I play with that throughout the six episodes but, within each one, we get more of an in-depth picture of each character so that by the end, we know all those characters’ lives inside out.”

Then, with all the scripts ready, Mellor was four days from the start of filming in March last year when the Covid-19 pandemic forced her to stand the production down. She recalls the “awful” moment she had to face a room full of people and tell them the show was going on hold.

“We barely had enough money to make the series, so it was daunting and awful,” she says, “but I had a responsibility to their wellbeing and their health, and I felt that it was the grown-up thing to do to say, ‘I’m sorry, you’re all going to have to go home. We’re going to have to close our doors, turn the key and walk away.’ It was absolutely heartbreaking. But it was amazing how people responded really well. Everybody knew what was going on, obviously, and they said, ‘We think you’ve done the right thing, Kay.’”

The team was able to lock up facilities used for the production office and art department and keep them in place for the show’s eventual return, but questions quickly arose about when exactly that would be. With the prospect of the virus surging in autmn, Mellor also knew that when production restarted, it wouldn’t be able to stop again.

“That was terrifying, really. I was thinking, ‘Well, what if I got it?’ So I worked with another director and we kept our social distance all times. He was in one bubble, I was in another bubble,” she says. “The actors all stayed together in their own bubble. They couldn’t go home like they normally would. They couldn’t socialise or go out to clubs and do things like they normally do. They had to just stay in their own little place, which is a real tall order to give to young people who go out and have a drink and socialise after work. And they were all brilliant. I couldn’t have wished for a better cast and crew.”

Mellor, who directed episodes one, two and six, says testing was key to getting the show over the line. On one occasion, an actor had gone to wardrobe for a costume fitting, only to later test positive, causing the department to shut down while everyone else was tested. It meant the production started testing earlier and earlier, with the cast even tasked with doing their own make-up under supervision from a make-up artist wearing full PPE. They would also put on their own costumes each morning and fit their own microphones.

Arguably the biggest disruption to the show was the international element of the series, which is produced by Mellor’s Rollem Productions and distributed by Abacus Media Rights. The original plan was to send the young cast to Las Vegas in search of their winning ticket. The seriousness of the pandemic, however, plus the added complication of the build-up to the US presidential elections, meant those plans had to change.

“I had been to Monaco probably only two years previously, so I’d remembered it and remembered the casinos and hotels and how you feel when you’re there – poor, basically,” Mellor says. “Unless you’ve got a lot of money in Monaco, you feel like a fish out of water. And I thought to myself, ‘Actually, Monaco feels more relevant.’ It’s more relevant that the syndicate find themselves in Monaco, with these beautiful great big yachts and stunning hotels and this amazing landscape. They’re just kids who work with dogs in a kennels in Yorkshire. It felt right so we went for it.

“From a style perspective, you walk down the street in Las Vegas and the syndicate wouldn’t have looked out of place at all. But in Monaco, they do. They’re young kids walking past all of these really quite stylish Monégasques. Everybody looked chic and beautiful, contrasted with our little syndicate wandering around with their short denim miniskirts and tatty trainers, so it works really well. I’m really delighted with the look of it.”

But filming in Monaco brought problems of its own, with curfews, lockdowns and a terrorist attack in nearby Nice last October.

“If we thought we were stressed in Yorkshire, we were 10 times more stressed in Monaco, but you know what, we did it, which was amazing,” Mellor continues. “We’ve got Monaco on screen and we’ve got these characters that have nothing in life. They don’t understand all this wealth that surrounds them, they’re out of their comfort zone. They’re in a different world.”

Those stresses are sometimes easily forgotten. When Mellor began editing the series, she kicked herself watching the series back at a moment when two characters might have kissed, but don’t.

“I’m looking at a scene now and of course, they didn’t kiss because of Covid. And I’m going, ‘No, no, why didn’t I get them to kiss? I should have got them to kiss,’” she says. “When you’re removed from it, it’s hard to remember what it was like when you were on set and you were going, ‘She might have Covid today.’ You just didn’t know.”

The BBC’s support and enthusiasm for the series meant Mellor felt extra pressure as she raced to deliver the finished product ahead of its launch on BBC1 tomorrow. Following the UK premiere, it will also premiere as a BritBox original series in the US and Canada.

“It was terrifying but flattering as well to have the BBC ringing you up and saying, ‘We want to put this out,’” she adds. “Not only do they want it and they’re going to put it out, they believe in it 100% and love it. They were looking at the rushes and going, ‘This is great. This is the sort of thing we need on our screen.’ So for me, it was lovely and I thought, ‘Oh, let’s try and do it.’ But actually, we were tying ourselves in knots to try to get it on the screen.”

For viewers stuck in various stages of lockdown, Mellor hopes the show will provide some escapism direct to their living rooms through a mix of humour, a cat-and-mouse chase, a star turn from newcomer Morleigh and lots of dogs.