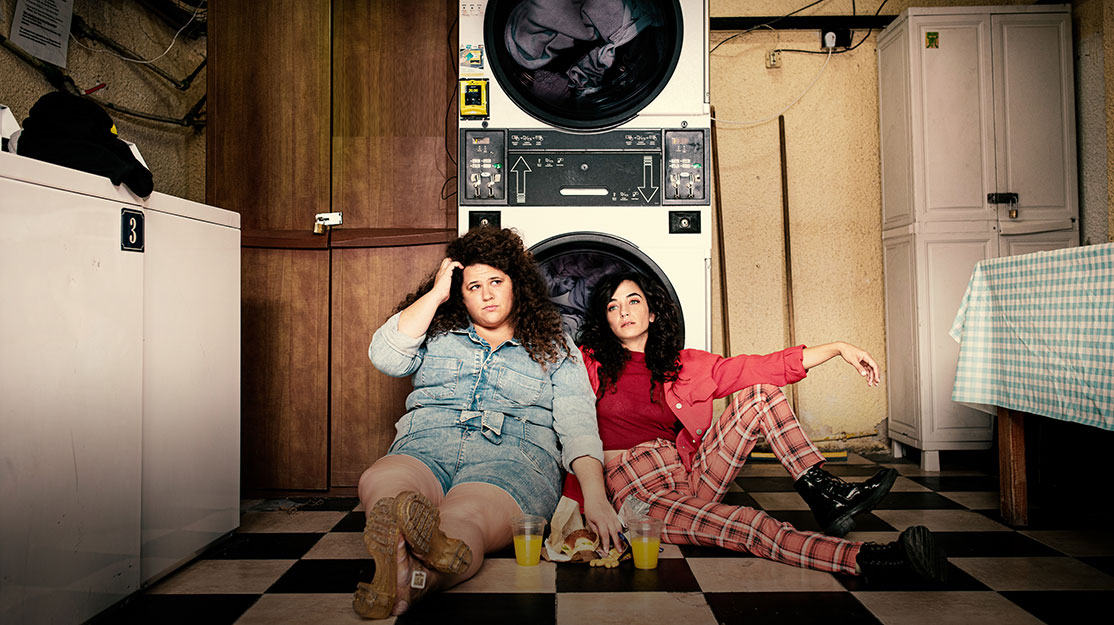 Israeli dramedy Sad City Girls is a warm, funny and emotionally complex story of friendship and the highs and lows experienced by two young women thrown together in unexpected circumstances.

Lihi (played by Maya Landsmann) is a medical student leaving her overprotective parents’ home for the first time to live in Tel Aviv. She’s gay but has never had a girlfriend, and meeting a string of prospective housemates leaves her overwhelmed. Enter Leah (Einat Holland), a fashion design student who has no home to go back to. She grew up in an ultra-orthodox family and is now free – but lonely.

While their differences may be clear and obvious, they soon find each other as a source of comfort to fill the void in their lives as their friendship becomes the best and worst thing to ever happen to them.

Produced by Yoav Gross Productions (Manayek) for Israeli broadcaster HOT, the 10-part series is written by Shir Reuven and directed by Talya Lavie.

The show recently screened in competition at French television festival Canneseries, where Reuven and Lavie spoke to DQ about their partnership and making the series during the pandemic.

What are the origins of Sad City Girls?
Lavie: Shir started writing the show and she approached me with her first outlines. I was very intrigued by it.

Reuven: Two years after I moved to Tel Aviv, I realised my life had completely changed. Everything I thought about the world had changed and I felt like I hadn’t kept up with the changes I went through because that time was so full of events and things that kept happening. Then I felt like I had to preserve it, in a way, and keep that energy and to understand it and process it. It felt like a story. It felt like something happened to me for the first time and I wanted to write it down and keep it with me, so I started writing it.
I wanted Talia to direct it because she’s the best director in Israel, and in the world, so Talia had to do it. When I approached her, she was like, ‘I’m busy, I don’t know.’ I sent it to her, and when she replied and said, ‘Let’s start.’ I was very excited. It was great because it became something from the two of us.

When we first meet Lihi, she’s moving out of home and, under the eyes of her family, sizing up potential roommates. Tell us more about her.
Reuven: She starts at a point where she’s not an adult yet. She’s more a child in an adult body. She understands she needs to move forward with her life and move to the next level, but she doesn’t know how to do it. In every episode, something else is happening her. It’s like a computer game in a way – she needs to pass each step to become the adult she wants to be, but during the show she makes mostly mistakes.
I don’t know whether she makes any right decisions, but mistakes are magical, especially at her age. If you have a child and you make a mistake, someone will probably talk about you in therapy in 10 years. But at Lihi’s age, you can make all the mistakes you want and, in the end, she becomes more adult. She’s on her way to adulthood.
She feels deep down that Leah will help her make the mistakes she needs to make. Her parents and the place she grew up in meant she didn’t make mistakes, and now she’s met this person who says, ‘I will make you make all the mistakes you need to become the person you should become.’

Lavie: Right after Lihi meets Leah, both of them become the leads of the series, so it’s not just about Lihi’s story. Once we have Leah, it becomes about their friendship because we follow Leah to her father and her relationship with her mother. It’s the relationship between them both that is the dynamic. It starts from a certain point and ends at a different point.

Talya, when you read the script, what were your first thoughts about how you might film the series?
Lavie: I really liked Shir’s writing and the characters. I thought there was a lot of potential. I felt really connected to it because I know those friendships when you’re 20-something – you get so involved in things and build and discover your own personality in these friendships.
We’ve been going through this process for a few years now. When Shir first approached me, I was in the middle of doing another film, so it took a little while. Then we started working together on the structure of this 10-episode season. I wanted to find the vibe [of the series] and show that through the actresses, to cast the right actresses and find the right locations. I wanted it to be very expressive and to have a very indie look.
There is something very wild and free-spirited about it. Also, the series doesn’t fit just one genre, it mixes genres. Some episodes are really funny, some are really dramatic and not funny at all. But still, it has one vibe to all of it.
The humour was in the script. It was very wittily written. Shir is a stand-up comedian so she’s very funny; her writing is very smart and witty. I thought it was funny to begin with and I knew I had to find [comedic actors]. Most of our actors have a very strong comic orientation.

Shir, what is your writing process like?
Lavie: She likes to write lying down on the couch!

Reuven: I first try to understand the story. After I see if it works, I share it with Talya and she gives me her notes, and then we start writing the dialogue, which is a lot of back and forth [between us]. We did very small changes [after casting]. I did rewrite the scripts after Talya read them, and then we worked on them together.

Talya, how did you work with the actors on set?
Lavie: Firstly, we shot in such small spaces, nobody had any freedom! I always like to rehearse a lot – I believe in rehearsal. As precise as you can be in rehearsal, you can be as free in shooting. So we rehearsed as much as we could. Even though it’s the complete opposite, I like to prepare shooting like on a theatre show, where everything has to be prepared and everybody has to know how they will say every sentence. Then when things are going well and everybody knows their role so well, you can invent stuff and really live. There was so much in their characters. The two leads and all the actors were so good; it was such a pleasure to work with them.

The show was shot in Tel Aviv. What can you tell us about the filming experience?
Lavie: There are always budget challenges – you can never talk enough about that, or the time you have. You always wish you had more time for everything. But the big challenge was that we shot it during the second Covid-19 lockdown in Israel. People always tell you to find the good thing in everything, but the only good thing was that there was not much noise from the street. It was like being in a studio, very quiet. It was very difficult. It was depressing, too, because a lot of places were shut down and we had to create the feeling of real life while everybody around us was terrified. It’s set in a very vivid neighbourhood and we had to create [that atmosphere] in different ways.
But it’s the acting that creates the vibe of the show, and we were very lucky to work and have our jobs during that time. We had to wear masks all the time. We had one restaurant location and then the day before [shooting], we realised it had shut down completely, so the world around us was crazy. We were sad city girls; we were sad city people, but we had a great time doing the show – a great cast, a great crew. We tried to look at the positives.