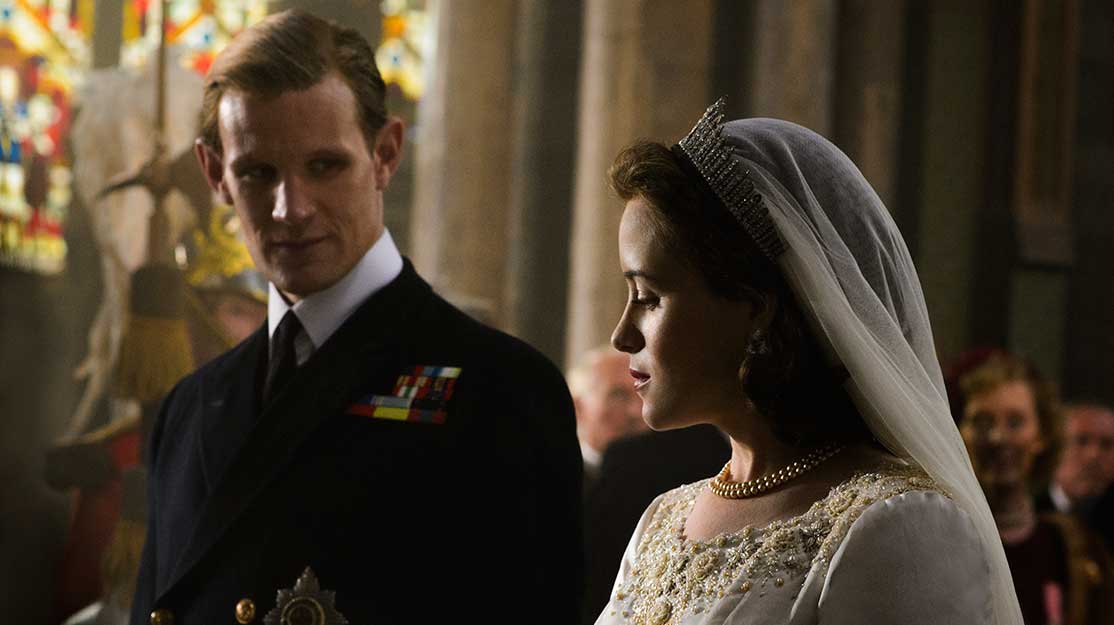 Royal rumble: Left Bank puts on The Crown for Netflix

“Netflix made us an offer we couldn’t refuse,” says the production company’s CEO Andy Harries, recalling the moment he pitched the show to Sarandos in the streaming giant’s US offices.

The enormity of the offer blew the likes of the BBC and ITV out of the water, ensuring that Harries wouldn’t, as he was expecting, have to set up a US-UK coproduction to make the show, which has a budget of around £5m (US$7m) per hour.

Whether any of the UK broadcasters’ drama buyers woke up with a horse’s head on their pillow, we’ll never know. But the fact is that the money Netflix put down ensured it will be the exclusive home to The Crown in the 190-plus territories in which the service is now available.

The drama was inspired by Peter Morgan’s hit play The Audience, which Harries produced, and has been directed by Stephen Daldry (Billy Elliot), so comes with some of the biggest names in UK drama attached.

Season one begins with a 25-year-old Princess Elizabeth (played by Claire Foy) in 1952 as she builds a relationship with the UK’s wartime leader Winston Churchill (Third Rock from the Sun’s John Lithgow), with each subsequent season looking at the politics, events and personal stories across a different decade of Elizabeth’s reign.

Clearly, Netflix has high hopes that the series will become the jewel that cements its position as the number-one SVoD service, spearheaded by exclusive series with huge international appeal.

“The Crown is storytelling that lives somewhere between television and cinema from Britain’s foremost chroniclers of modern politics, class and society,” says Cindy Holland, VP of original content at Netflix.

Given the global interest in the British royal family, Netflix’s interest in a series written by Morgan – the scribe behind the smash hit The Queen – was perhaps understandable.

“We were lucky because our ambitions tied in with their global ambitions. Little did we know, but they were looking for a global show to roll out around the world,” says Harries of the serendipitous nature of his company’s meeting with Netflix.

Harries describes The Crown as “the right project at the right time” and praises Netflix’s “no notes” philosophy: “They don’t directly interfere, so working with them has been a huge pleasure.”

With the show set to become Netflix’s first UK original, the deal marked a watershed moment for the country’s TV business. But Harries can’t say it came completely out of the blue, given that he has seen a gradual shift in Left Bank’s main broadcasters since the company was founded in 2007.

The company has always produced with one eye on the States and Harries is a big advocate of having the power of a major US distributor (Sony Pictures Television took a majority stake in Left Bank in 2012) behind it during deal making.

The firm has produced Strike Back for HBO sibling network Cinemax and Sky, alongside shows such as Wallander for the BBC and feature films including The Damned United.

Deals will increasingly be done with broadcasters on the basis of windowing, believes Harries, suggesting that buying and selling in the scripted marketplace is going to become a whole lot more complicated down the line.

“You’ll do three months here, another six months there and nine months there. Although that hasn’t really started happening in the UK yet, it will,” says the former controller of drama/comedy at Granada Television.

When The Crown is finally unveiled on November 4, it’s very likely there’ll be an outcry in the UK that the series is not available on the public broadcaster, or at least a terrestrial channel, given the subject matter.

So how threatened should the BBC and ITV feel by Netflix so dramatically moving in on their patch? A bit, but not massively, answers Harries.

“In the UK, the culture of broadcast television still has meaning. It might not in 10 years’ time, but it still does at the moment. There’s no doubt that both the BBC and ITV were extremely disappointed [not to land The Crown]. Ultimately the BBC and ITV shouldn’t look at The Crown as part of an overall trend that will destroy their business. I don’t think that’s the case – it’s a bit of a one-off.”

Nevertheless, it certainly “challenges” the two most famous British networks, who Harries admits are “still making great shows and I’ll still take great shows to them.”

ITV, at least, doesn’t appear to have held a grudge for too long, commissioning eight-part drama The Halcyon, set in a London hotel in wartime 1940, from Left Bank towards the end of last year.

Described as “Downton-esque,” The Halcyon follows the scandalous goings-on in the “most glamorous air-raid shelter in the world,” a home from home for politicians, overthrown monarchs and shady dealmakers.

“1940 was one of the most dramatic years in our island’s history. Who could have imagined that London would survive the Blitz? What was it like to be in a five-star hotel in the West End through this extraordinary period?” asks Harries.

“It’s such a compelling idea for a drama. The world of the Halcyon hotel has to carry on, through thick and thin and against all odds. The bedrooms have to be made safe, the bars have to stay open and the band has to play on. People have to sleep, eat and survive.”

The Halcyon began filming in London and surrounding areas in April this year. It is being sold internationally by Sony, and foreign buyers such as PBS in the US will likely be crossing their fingers that it could fill the Downton Abbey-shaped hole in their schedules.

However, as Harries says, there’s no such thing as a guaranteed hit when it comes to television production, particularly in such a crowded market.

“There’s a been huge boom in scripted and in people pouring money into these companies producing drama, so the expectations are high. But I’m not sure all the expectations are going to be met,” he warns. “I worry slightly that we might be on the edge of a boom-and-bust situation. I hope not. The appetite for drama is very large – but you still have to make it great.

“If you look at the figures at the moment for some of the dramas on TV, some of them aren’t doing terribly well. ITV might have Downton one week, but it could be followed by another show that simply doesn’t perform.”

Talent is key when it comes to improving your chances of survival, adds the exec, who believes the strength of the UK’s drama production industry – which consists of well over 100 different producers – shouldn’t be taken for granted.

Despite the tax breaks that have kept the industry so buoyant over the past few years, there are a number of recent developments that are restricting the ability of producers to “wheel and deal,” as Harries puts it.

“There are problems. The BBC is contracting, ITV is moving towards its own production base, which is understandable, and Sky now has its own distribution company,” Harries says.

Supporting the BBC and Channel 4 while not messing with the terms of trade is among the steps Harries says are necessary to protect the industry, which he describes as “strong and successful, but quite fragile.”

Harries says the money currently “flooding in” to the UK from the States is helping to support local producers and, historically, the UK-US coproduction model has ensured local broadcasters get bigger and sometimes better shows.

But should Netflix’s land grab for global rights become the norm then the dollars coming in could ultimately undermine the local broadcasters that have helped to establish producers such as Left Bank.

Indeed, The Crown was most likely the project the BBC’s former director of television Danny Cohen was referencing when he warned in December 2014 that the pubcaster was increasingly struggling to compete with Netflix for programme rights.

Harries may assure the likes of the BBC and ITV that the deal for The Crown was a “one-off.” But one would suspect that, deep down, they know that’s unlikely to be the case.