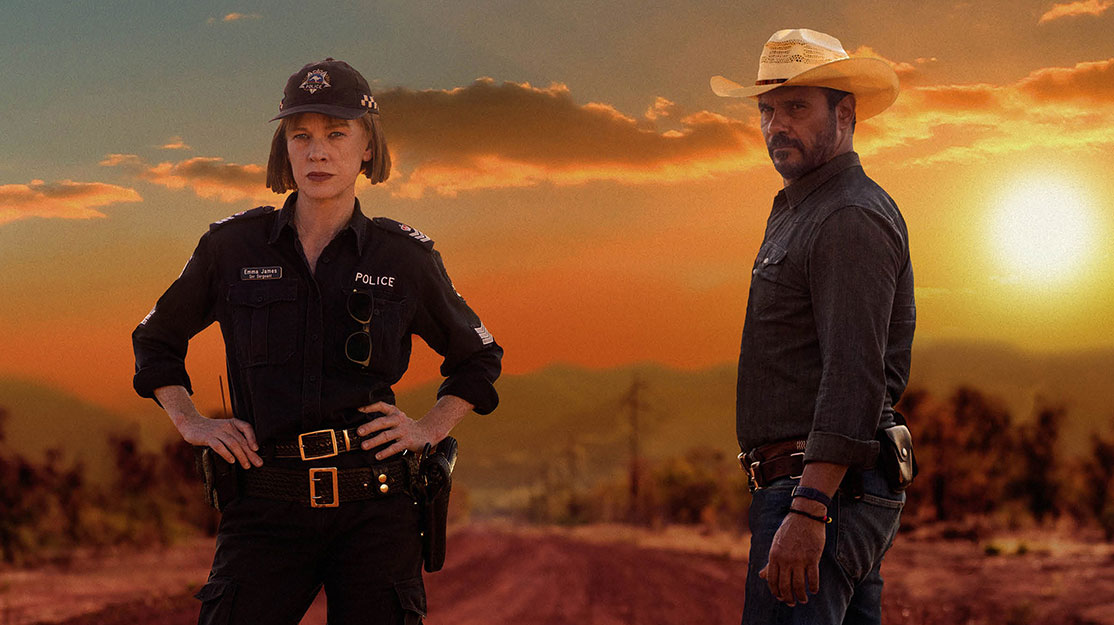 Picnic at Hanging Rock, Wake in Fright, Wolf Creek, Romper Stomper – in the last few years, Australian drama has revisited some of the country’s most famous feature films and novels to bring new series to TV that are either sequels or reimagined interpretations of the original versions.

Now comes Mystery Road, a spin-off from Ivan Sen’s award-winning feature films Mystery Road (2013) and Goldstone (2016). The six-part series, which will air this year on the ABC, sees Detective Jay Swan (played by Aaron Pedersen) assigned to investigate the mysterious disappearance of two young farm hands on an outback cattle station. One is a local Indigenous footy hero, and the other a backpacker. Working with local cop Emma James (Judy Davis), Jay’s investigation uncovers a past injustice that threatens the fabric of the whole community.

“I’d long been an admirer of Ivan’s work so I was very excited about doing something that was a homage to that but then extended the idea further,” director Rachel Perkins says. “Having an opportunity to expand on the original film and make this noir outback cop show that dealt with both race relations and history was a really interesting crossover for me.”

Produced by Bunya Productions and distributed by All3Media International, Mystery Road was filmed on location in Wyndham, the northernmost town in Western Australia. The harsh landscape meant Perkins was able to take the show’s characters and turn up the heat on them, literally, in this small community where everybody knows each other’s business.

“It was so hot shooting in Wyndham, 40°C most days, but the landscape is this incredible backdrop,” she says. “It really is an outback town; it’s almost like a frontier town and it has all of those qualities television has when it’s really great these days. It’s not just the story you’re interested in but the world. So we looked at series like Fargo and True Detective and looked at where they were set and how they really conjured the places. We wanted to set this story in a place that was very distinctive. So far, people have been amazed by the setting and that’s been part of people enjoying the series, that experience of the Australian outback in its most incredible form.”

The location was also appropriate for its history of racial conflict, a theme that bubbles beneath the surface of Mystery Road. “It’s not a cop show, it’s not just really about two missing boys. It’s about black and white Australians and how the simmering tension of history sits under our relationship,” Perkins adds.

Fronting the show alongside Pedersen is Hollywood star Judy Davis, who recently appeared in FX series Feud. The actor’s familial history with the region meant she had a deep understanding of, and interest in, the story. “I try not to think too much about how incredibly talented she is because otherwise it might be overwhelming,” Perkins says of Davis. “But I couldn’t have asked for a better collaborator. She was really terrific and I’m not sure what I’ll ever do now because I’ll want her in every role.”

Best known for films and documentaries such as Jasper Jones, Bran Neu Dae and First Australians, plus TV series like Redfern Now, Perkins says she enjoys telling stories across a range of genres. “But I’ve particularly loved working on Mystery Road because it’s a genre piece, it’s a TV cop drama but it has all this interesting, rich historical context, shot in one of the most shootable places in Australia,” she adds. “The landscape was so extraordinary. And with people I loved working with, so it’s very special to me. Having helmed all six episodes, it was wonderful to work across a canvas that was so large, and to be able to see the story through the whole evolution and its various chapters was such a privilege. I feel very lucky.”