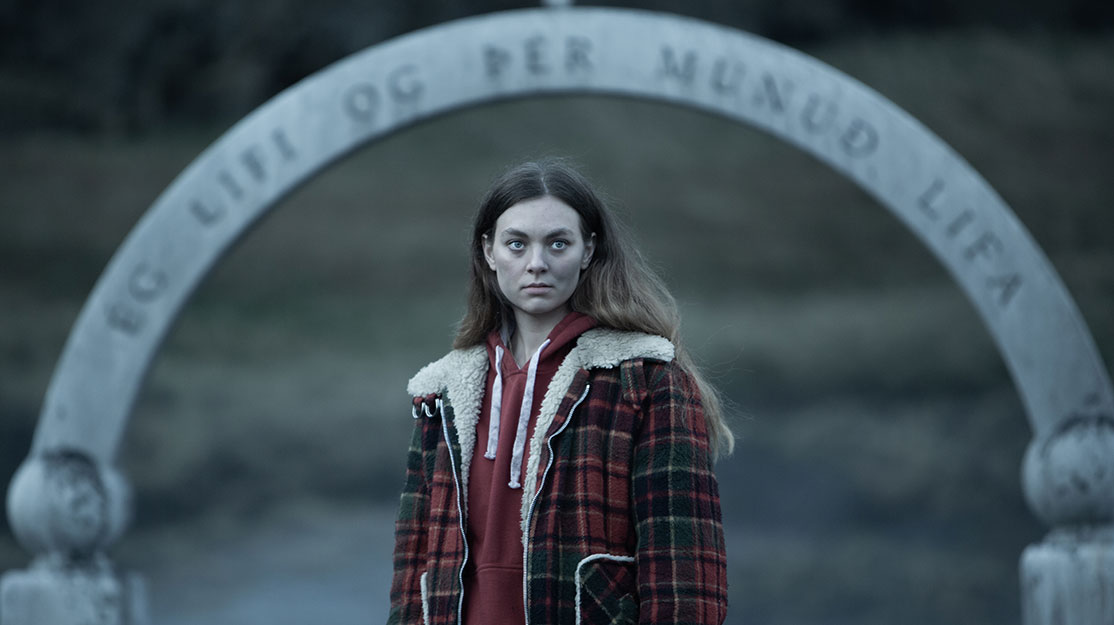 Rising from the ashes

Icelandic director Baltasar Kormákur tells DQ about the ideas and psychology behind his supernatural Netflix series Katla, filming during the Covid-19 pandemic and recreating a volcanic eruption.

Themes of people ‘returning’ – most often from the dead – have been explored in series such as French supernatural drama Les Revenants (The Returned), US drama Resurrection, Australia’s Glitch and the UK’s In the Flesh, set several years after a zombie apocalypse.

But for his latest television project, award-winning Icelandic film director Baltasar Kormákur (Everest, Adrift) puts a fresh twist on this science fiction sub-genre to create a series he describes as “psychological sci-fi.”

Katla, which is Netflix’s first Icelandic original series, opens one year after a violent eruption of the titular subglacial volcano dramatically disturbed the peace of a small town, forcing many of its residents to evacuate their homes as the ice near the volcano started to melt. Those who stayed behind now provide vital community services in a place that has become almost apocalyptic under layers of ash and dust, in the shadow of the still-active volcano.

Gríma is still looking for her sister, who disappeared the day the eruption started. As her hope of ever finding her body is fading, the residents start to receive visits from unexpected guests, leading them to suspect there may be something hidden under the glacier that no one could ever have foreseen.

Produced by Kormákur’s RVK Studios, the eight-part series was in development for several years before it was picked up by Netflix. The director created the series with writer Sigurjón Kjartansson, who penned the scripts alongside Lilja Sigurðardóttir and Davíð Már Stefánsson.  Kormákur directs the opening three episodes and the finale, with the show launching worldwide on June 17.

Making Katla has been a deeply personal experience for Kormákur, who has put many of his own experiences into the story, not least a dream he had about alternate versions of ourselves, which first gave him the idea at the heart of the series. The themes behind Katla also blend elements of science, religion and Icelandic folklore, with the director leaning on the legends of elves who steal children and replace them with near identical versions, known as changelings.

“In some way, we project ourselves onto other people and we also create different versions of people, which probably says more about who we are than them,” Kormákur tells DQ, speaking from South Africa where he is currently filming his latest film, Beast, with Luther star Idris Elba. “There may be many versions of me out there and these different versions start to have a life of their own. There are twists and turns [in the series] but it’s not a zombie movie, it’s not from that genre.

“I had a dream; me and my son were having some difficulties and, in the dream, I was me as I am today and he was him 10 years ago when we were closer. When I woke up, I realised I needed to go back to the relationship we had at that time and be closer to him and more present. It felt more real than anything that had happened to me in a long time. I did it and it changed our relationship. Also, when people lose somebody close to them, they still experience those people, not as ghosts but as a projected idea of them. In some ways, this is where we’re heading [in the series]. I like to call it psychological sci-fi.”

With high-concept ideas of replicant or alternate versions of living people at the heart of the series, it’s no surprise to hear Kormákur describe developing Katla as “one of the most difficult and exciting experiences” he has ever had. The key, he says, was to ensure the story never steered too close to common genre tropes.

“We knew we were going the wrong way when we were doing scares that were just a cat in a window. It had to be on a deeper level,” he says. “It’s so easy to get sidetracked. You get a great idea, which I believe we had, and then suddenly the solutions start to be more and more ‘genre’ because it might be difficult and you need to keep the pace going. But we didn’t go for that. I hope it shows that we didn’t go for the easy solutions. Episodes seven and eight are quite shocking – I was quite surprised Netflix let us do the things that happen. Some people will think, ‘What the fuck is this?’ but I think people are open to not having everything explained for them.”

Kormákur developed the idea with co-creator Kjartansson before writers Sigurðardóttir and Stefánsson came on board. When it came to shaping the scripts, the director then took a step away from the project to ensure he wasn’t “snow-blinded” by the story during production, preferring to return at the end to help polish the final drafts.

“Writing is really hard work and by shooting the final episode, which I also did on [Icelandic crime series] Trapped, I feel like the director in me will push me to work harder to get closure in the scripts,” he says. “In the end, I was writing it with Sigurjón and we were going back and forth. It’s not about who owns the idea; I don’t care, I’ve gotten over that. Maybe I cared more before. It’s just about getting it right. When you try to find what is the truth for that story, it’s more about that than the egos in the room.

“Then I’m very involved in post-production. I allowed the other directors [Börkur Sigthorsson and Thora Hilmarsdóttir] freedom during the shoot but, in post, it has to become one thing. Especially now on Netflix, people are bingeing it so it has to feel like a complete piece, rather than when you’d see an episode every week. But I love the format. I’ve recently started making TV and it allows you to do more – suddenly, you have five or six hours and characters can go on a longer journey and be more twisted, and you can still get them back at the end.”

The filmmaker says Katla was destined to be a television series from the start, as the concepts behind his dream came together with ideas he had about what could be hidden beneath Iceland’s frozen glaciers, and the possibility of something emerging from within.

“That’s the idea I started with and then it grew, but I didn’t want it to be [1982 John Carpenter movie] The Thing, with some weird stuff coming out. There were some big companies interested in doing this and they wanted to do it in English, but I wanted to make it in Icelandic, and then Netflix came on board. It was a lucky strike. Somebody had read it in the past and passed it to Netflix, and then they called me and said, ‘Do you still have it available? We want to talk about it.’ Suddenly, there was interest for it.”

The series then attracted global attention when it became one of the first in the world to resume production last spring at the height of the first wave of the Covid-19 pandemic, pausing for just three weeks and then “never looking back.” Kormákur was determined to find a way through the sudden health restrictions that continue to shape daily life more than a year later, and it was only by returning to the studio and implementing strict colour-coordinated zones for the cast and crew that filming could restart.

“We managed to keep it under control and we didn’t have any trouble on our set,” he says. “We were lucky because [the south Icelandic town of] Vik, where most of the series takes place, is one of the most popular tourist places in Iceland. We hadn’t really thought through how we would make it apocalyptic, we would just work our way through it. But when we arrived, there was no one there and they were so happy to have us because we brought some business to the place.

“Having Iceland to yourself, you could also see it in a different light and it turned out the best for us. It’s weird to say, because people are suffering, but I’m just being honest and truthful. It was a great experience.”

At centre stage throughout the series is the volcanic eruption, which Kormákur modelled more on the real-life Eyjafjallajökull eruption that sent huge plumes of smoke, ash and dust into the air in 2010 than the ongoing lava streams at Fagradalsfjall. As a result, the exterior scenes and landscapes are full of whites, greys and blacks. But the director wanted to create a visual contrast by making the interiors of the houses and other buildings more vibrant and colourful.

“Iceland is warm on the inside and cold on the outside,” he says. When characters go onto the glacier, they also wear pink coats to make them more noticeable should they get into trouble, adding a pop of colour to the otherwise desolate background.

“I also shot way more on wider lenses in the close-up scenes to open up the actors’ faces. You allow people to be more vulnerable when you shoot them in close-up instead of backing them up in a long shot,” he explains. “Overall, I wanted to ground it in reality but elevate it slightly, not making it over-stylish but squeezing the colours so it’s vibrant. I didn’t want it only to be dull, but it’s tricky because people are dirty and there’s ash. Often we think something is realistic when it doesn’t have any flavour, but that’s not the life I know. Reality is the most interesting thing ever.”

Of course, creating the volcano itself, with its constant plume of smoke billowing into the sky, and dressing the town in ash, proved to be one of the biggest challenges in production. “It’s very complicated,” Kormákur says. “When you do those things, you just write them and then you think, ‘Fuck, who wrote that? Now we have to do it.’ It sounds very simple on paper. When you write ‘night,’ suddenly everyone has to work 12 hours during the night because of that one word.

“In this case, we had to dress the whole of Vik with ash. It’s quite traumatic for [the locals] because it’s one of the places that has been hardest hit by volcanoes in Icelandic history. We were covering houses with ash, but we couldn’t do the whole mountain or the whole city, so then we had to extend the visual effects and create the plume, which is all visual effects. But I loved this challenge. It’s an image I’ve known since a kid; it’s always a regular event. A volcano in Iceland is like rain in London.”

The show’s look was particularly important to meet the director’s ambition for the series to stand out beyond the story itself, as he was keen to avoid seeing Katla blend in with other Scandinavian noir shows.

“I want you to know Katla was ‘the volcano show,’” he says. “They can call it Nordic noir but it’s not a police series and it’s supernatural. I hope there’s substance in it and it’s about something very different. You could probably find some connection to [Russian director] Andrei Tarkovsky’s movies like Stalker and Solaris, but in a very different way. It’s not like anything that is going on right now. That’s my hope.”