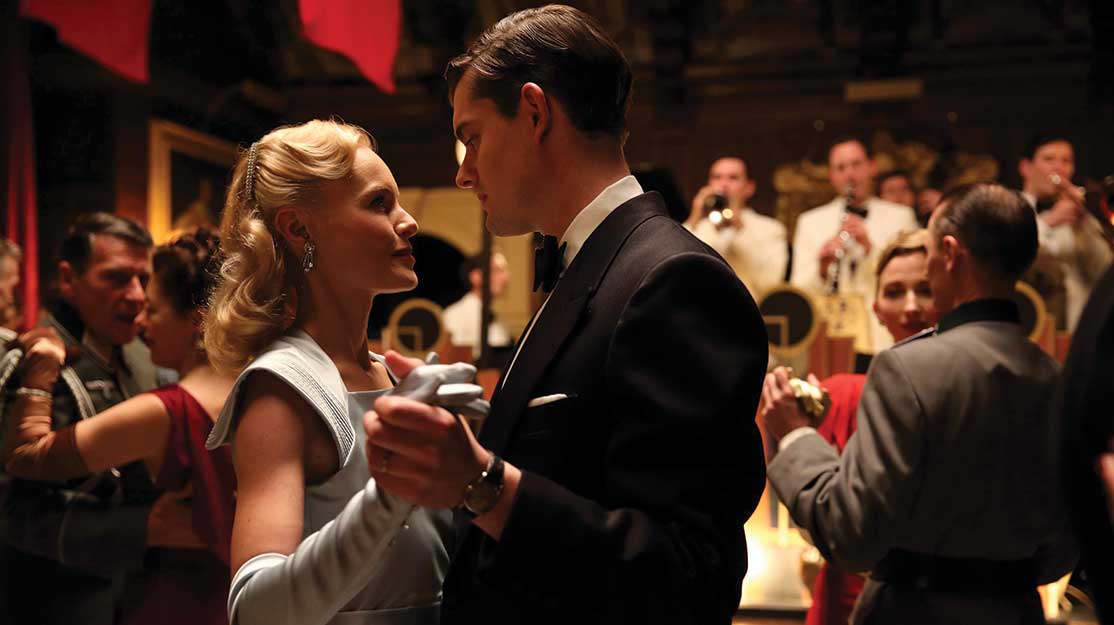 At first glance, the set of the 1940s-era London police station looks unassuming and inconspicuous. A map of the River Thames hangs on one wall, beside a board displaying the details of ongoing murder investigations. A telephone switchboard stands in another part of the office, while adjacent tables are laden with an assortment of maps, newspaper cuttings, mugshots and used ashtrays.

‘Wanted’ posters show the faces and details of eight people sought for a train robbery, while a steam train calendar displays the dates of November 1941.

Yet look a little closer and unusual details start to emerge – notepaper headed with the word ‘Metropolitanpolizei’ sticks out from the top of a typewriter sitting on one desk, next to notebooks embossed with Nazi insignia.

Stepping outside the office belonging to Detective Superintendent Douglas Archer, ‘Metropolitanpolizei’ appears again, this time on a sign hanging over the doorway, while Nazi banners hang in the stairwell of a nearby spiral staircase. The scene is jarred further by the sight of soldiers standing in khaki SS uniforms.

This is the setting for SS-GB, the forthcoming BBC1 drama based on Len Deighton’s 1976 alternative-history novel that imagines the Nazis won the Battle of Britain in 1940.

Set in Nazi-occupied London, the story follows DS Archer (Sam Riley) who is working under the brutal SS regime. But while investigating what appears to be a simple black market murder, he is dragged into a much darker and treacherous world where the stakes are as high as they were during the war. 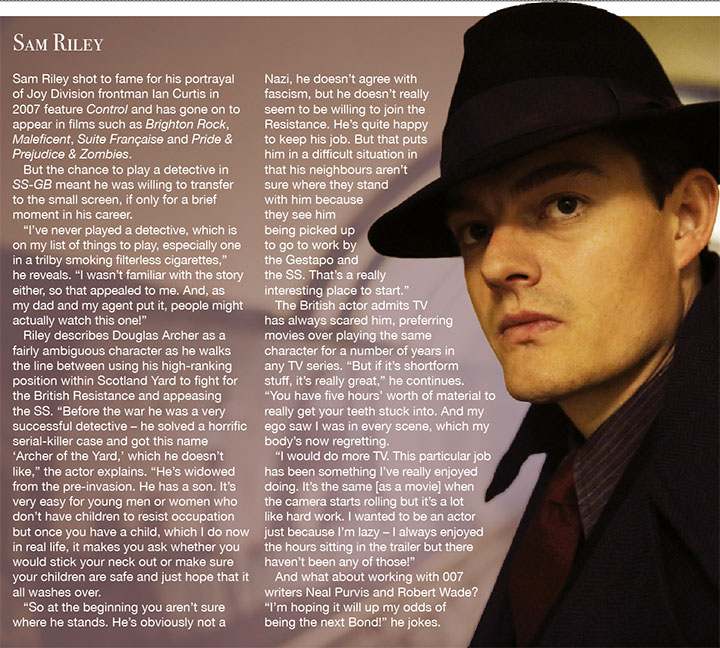 The five-part series, produced by Sid Gentle Films, has been adapted from Deighton’s novel by Bafta-winning writers Neal Purvis and Robert Wade – most famous for writing five James Bond features, including Spectre, Skyfall and Casino Royale.

The drama received its world premiere this week at the Berlin Film Festival, ahead of its UK debut on Sunday February 19. Distributor BBC Worldwide has also sold the series to broadcasters in Germany (RTL), Croatia (Pickbox), Sweden (SVT), Greece (Cosmote), Israel (HOT/Cellcom), Iceland (RUV) and Poland (Showmax), while it will also air on BBC First channels in Africa, Australia, Benelux and the Middle East, as well as UKTV in New Zealand.

It is directed by German director Philipp Kadelbach, whose credits include Naked Among Wolves and Generation War. Sally Woodward Gentle, Lee Morris, Purvis, Wade and Lucy Richer are executive producers. The series is produced by Patrick Schweitzer.

As fans of Deighton, Purvis and Wade were instantly drawn to the series, which marks their first move into television, when they were approached about the project by Woodward Gentle.

“It’s a pretty faithful adaptation,” says Purvis of the screen version. “The biggest challenge was [in the book] we were following Archer from his point of view. The fact he can’t trust people means it’s very difficult to talk to other people about what he’s thinking, so it was all about making it comprehensible because it’s quite a complex plot and nothing’s straightforward. The Resistance has got in-fighting and the German army and SS are opposed to each other, so it’s just finding a way to navigate through the story in an intriguing but understandable way.”

Wade picks up: “I think I understand it now – but we had to simplify it. Since Len wrote the book, there’s a bit more now known about what was going on in Britain to prepare for an invasion, so we were able to access those sources and that gave us background for the British Resistance and the real mechanisms that were set up in event of an invasion. But really our main job was to make the most of the drama within the story and, for that reason, we made a few changes that kept certain characters alive longer than they were in the book.”

Already an established genre in the world of fiction, alternative history is becoming a hot topic in television, with SS-GB following hot on the heels of Amazon’s The Man in the High Castle, which plays out in a world where the Axis powers won the Second World War and America has been split between Japanese and Nazi rule, with a buffer zone separating the two.

Wade draws a distinction between the two series, in particular describing the Amazon drama as closer to science-fiction because the events it portrays weren’t ever close to happening. SS-GB, however, was within the realms of possibility.

“With The Man in the High Castle, which is set in 1962, you’re talking about the consequences [of the Second World War]. But in this you are actually living through the Occupation and the game isn’t necessarily over. It’s not a historical result, history is alive.”

Wade and Purvis co-wrote films Let Him Have It (1991) and Plunkett & Macleane (1999) before being asked to write Bond movies The World Is Not Enough, Die Another Day and the super-spy’s four most recent outings starring Daniel Craig. Other credits include 2003’s Johnny English, a spoof of the espionage genre starring Rowan Atkinson.

“We’ve written together for a very long time,” Purvis says. “We do that because we enjoy it. There’s more to it than just writing; you’ve got to go abroad and it can be quite pressured. So having two people has always been good because when things are going well, you can always go down the pub together – and when things are going badly, you can go down the pub together! It gets the job done well to be able to discuss things.”

With scripts approved by Deighton, the writers say they haven’t felt the need to be on set every day, but have kept in touch by watching the daily rushes. They were also consulted during casting and say they were very pleased by the decision to put Riley in the lead role. “We wanted someone who was a film actor – this is his first television job so it’s just that thing of trying to keep it like a big movie,” Purvis notes. “It gave it a bit more oomph to have someone like Sam.”

If Riley’s DS Archer is akin to Sam Spade, the protagonist of Dashiell Hammett’s noir thriller The Maltese Falcon, then US actress Kate Bosworth is firmly in the femme fatale role.

“She’s an American journalist who has just arrived on the inaugural New York-London Lufthansa flight, which is one of Len’s nice touches,” Wade offers. “She’s a femme fatale. She might be working for the Resistance, she might be a spy for the Germans, she might be an agent for the Americans – you don’t know. She’s someone who’s attractive to Archer and attracted by Archer. So it’s a dance. He’s trying to figure out whether she’s involved in this murder and she’s trying to figure out what she can get out of this guy.

“We balance her with Maeve Dermody, who plays a girl caught up in the Resistance and who is quite messed up. She’s an English girl and her parents were killed during the invasion. But she’s actually spying on Archer.”

But how did their experience on SS-GB compare to scripting a Bond movie? “It’s easier in the sense that there’s a book and you don’t have massive expectations,” Wade admits. “We’re very proud of this but we were able to write it in a free way. Hopefully there are some real surprises in this.

“With a Bond film, people are expecting certain things. The other aspect for us, as it’s our first TV series, was that having that large canvas to be able to tell a story with twists and turns over five hours is great fun, and you get the freedom you don’t have in an hour-and-a-half movie.”

Purvis adds: “We have been approached by TV a lot but we’ve always said no to everything. This was the first time we said yes. It’s a genre one can feel comfortable with. Len’s a great writer. It just seemed to be appealing and something we could do.”

For locations manager Antonia Grant, the toughest part of her job on SS-GB was finding appropriate exteriors around London for the show’s wartime setting. “It’s always a challenge for a locations department to remove the modern world,” she says. “We rely on the art department as well to help us so it’s very much a combined effort.

“There will be some things that are quite obvious [locations] as per the script that you have to go and look for. But then otherwise it’s coming up with different options to put to the director and designer and it’s a lot of driving around, photographing different places, chatting to people, persuading people to let us film.

“It’s always lovely looking for new locations but, on period dramas, there’s a limited amount because more things are changing and being modernised. I’ve shot on several new locations in this. Also, the nature of SS-GB, being alternative history, means you’re looking for quite different locations compared with those used for The Hour and certainly Call the Midwife [both also period dramas on which Grant has worked].”

After piecing together a 300-page script and bringing Deighton’s story to the screen, Wade and Purvis have one eye on their next big-screen feature – but tease that this might not be the end of the story for SS-GB.

“History is still in play, it’s not ended,” adds Wade. “Some characters have died, some have grown. I’m very pleased with the way it ends and there could be more.”