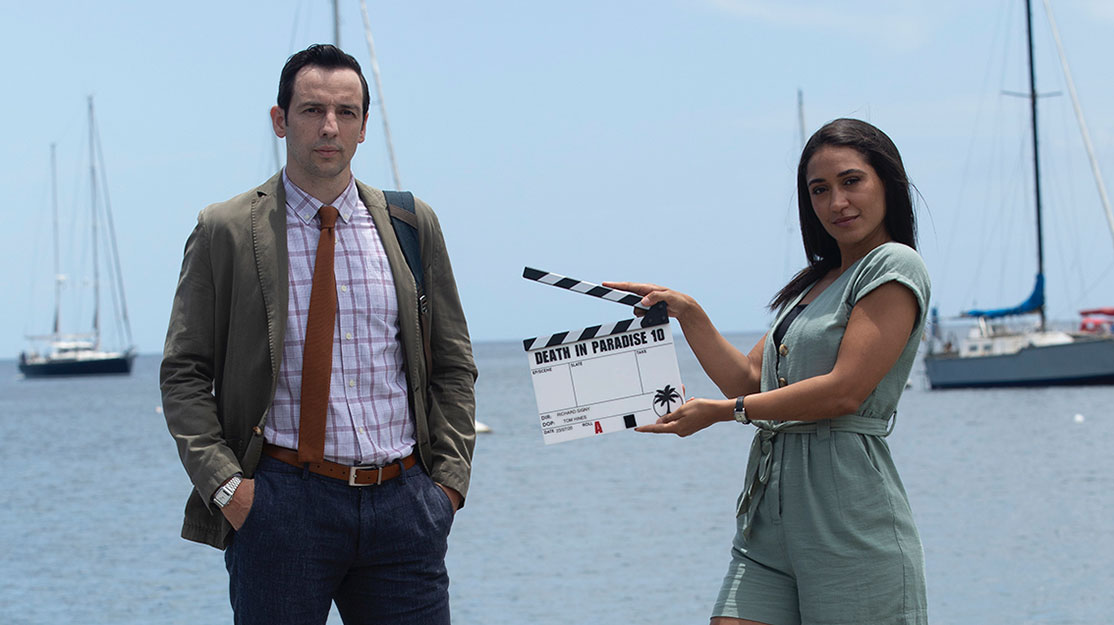 Crime drama Death in Paradise is back in production, celebrating its 10th anniversary while becoming one of the first British series to start filming after the coronavirus-enforced shutdown. Red Planet Pictures’ Tim Key and Alex Jones tell DQ how they have done it.

Death in Paradise began with a competition. Series creator Robert Thorogood entered his idea for a series about a ‘Copper in the Caribbean’ into the Red Planet Prize, a contest set up by UK prodco Red Planet Pictures in 2007 to unearth new writing talent. Thorogood was a finalist in 2008, but his pitch was subsequently picked up to series by BBC1 and France Télévisions, with the show launching in 2011.

Now celebrating a decade on screen, Death in Paradise has begun filming its 10th season on the French Caribbean island of Guadeloupe. But the fact the cameras are rolling at all is also a notable achievement, with the show being one of the first British series to begin production following the coronavirus-enforced shutdown in March.

Inspired by the real-life story of a British police officer who went to the Caribbean to investigate a suspected murder during the Cricket World Cup, the series sets up a fish-out-of-water tale about a quintessential English cop who is posted to the fictional island of Saint Marie, and discovers it is his idea of hell.

From a modest opening in its first season, Death in Paradise has grown to become one of the BBC’s biggest returning dramas, with viewers drawn to the classic murder-mystery plots and the stunning locations that provide the perfect escapism during its regular January and February timeslot. BBC Studios distributes the series worldwide.

“It means everything to us to be back. We never take anything for granted,” Red Planet’s executive producer Tim Key tells DQ on location in Guadeloupe. “Every year, you look at the ratings when they come in and we’re always delighted, but we never think, ‘We’ll be fine.’

“Given that it’s a show with a formula and a format and it has a number of boxes to tick, we have to make sure, creatively, we’re challenging ourselves and trying to keep the show fresh as well. We do that sometimes in quite small ways that the average viewer might not notice, and other times in more profound ways, with two-parters or different kinds of puzzles and guest casting.”

Season 10 brings Little’s DI Parker together with DS Florence Cassell (Joséphine Jobert, pictured top alongside Little), who appeared in five seasons before taking a break in season nine. The producers also tease that they have plans to surprise viewers who have stuck by the show for the past decade, and have kept to those plans despite the uncertainty created by the pandemic.

“We’ve stuck to our guns creatively,” Key says. “We’ve made very little concession to Covid, and the concessions we have made are ones I don’t think the audience would spot. We are a show that knows what its audience wants, and escapism is one of those things. Tuning in to Death in Paradise, hopefully at the beginning of next year, the last thing people want to see are masks and social distancing. It’s not playing to our universe on screen, but obviously it plays into it profoundly off screen.”

Red Planet was five weeks into pre-production when the UK went into lockdown and filming plans were suspended. Several crew members who were already in Guadeloupe had to return home quickly, before the production team could take stock of events going on around them.

“At the beginning, in those slightly bleaker moments, we were thinking it just wasn’t going to be possible [to start filming],” admits Red Planet’s joint MD Alex Jones. “The advantage we had on our side is that we have a great insurance policy that has a producers indemnity aspect to it, which has gotten us out of a pickle on a number of occasions and covers us against hurricanes and things like that, which traditional cover doesn’t do. Our Covid remounts fell into that. We were pretty unique and lucky that we were covered as soon as they were able to give us the nod to go.”

Rhe production team felt confident they could make the show while adhering to Guadeloupe’s one-metre physical distancing rule. “The type of show Death in Paradise is also leans very much towards a Covid-friendly world,” Jones continues. “We don’t have huge amounts of intimacy, we don’t have huge amounts of stunts or physical action. We film a lot outdoors because we’re in the Caribbean so we want to see the Caribbean. We had a lot of things working to our advantage. That with the fact we were really fortunate with the type of insurance cover we had, it started to feel like it was coming together.”

The biggest issue was gaining access to Guadeloupe, which was closed to non-essential business. But having worked closely with the region during the making of the series, the production was allowed to return as long as appropriate health and safety measures were firmly in place. “They saw us as an essential part of their economy and they supported us in returning,” Jones says. “They gave us an exemption, which meant we could start bringing our crew back. At that point, when all those things came together, we were like, ‘Right, let’s do this.’ We fired the starting gun.”

It wasn’t always smooth sailing, however, and the decision to push ahead came at the very last moment that it was possible to send generators and lighting equipment on a four-week voyage across the Atlantic Ocean to Guadeloupe. Key remembers speaking to Jones on a Friday, when they made the decision to “push the button,” and on the following Monday the equipment was being loaded onto the ships.

“When it happened, it happened very quickly. For the months before it, it was really stressful, like it was for everyone in every industry,” Key says. “You’re dealing with lockdown on a personal level and you’re dealing with it on a professional level, trying to get used to that new normal of working from home and sharing your home with your work colleagues on Zoom. At the same time, you’re trying to think if this show can be made. Suddenly it happened, and now we’re doing it. It’s so surreal, it’s really weird in a brilliant way but it’s ever so strange.”

The production has put in place a health and safety protocol for all cast and crew to follow, while a Covid supervisor is also on set, meaning everyone has been happy to get back to work while wearing masks – and visors in some cases – when not on camera, as well as physically distancing at all times. Everyone was tested for Covid-19 before they left the UK, when they arrived in Guadeloupe and again before filming began. They also have to fill out a ‘fit to work’ survey every morning and record their temperature.

“They are doing everything we’re asking them to do as an automatic thing, not because we’ve enforced it. I’ve found it quite moving,” Key says. “They’re doing it in a very real and genuine way because they know what’s at stake in terms of the industry, their livelihoods and also their health. It’s very hard to put a set of guidelines in place that apply to every show, because every show’s different – and even for every location, because every location is different.

“It’s just empowering everybody to be responsible and training the crew to work in a slightly different way and making sure the whole thing doesn’t rest on the shoulders of one person alone. It’s a shared responsibility to deliver that.”

Filming began on Thursday July 23, with a three-day run to get the production underway before a day off on the Sunday to “let everybody catch their breath,” Key says. Production then returned to its usual weekly five-day filming routine. “So far we have been achieving our days. We even wrapped early once, which is quite unusual on this show. It’s because everyone’s on it – everyone’s prepped, they’re ready to go. It’s early days, but what we’ve learned is that the stuff we’ve put in place works. It’s doing what it needed to do.”

Jones adds: “It’s about having a set of rules that work and are enforceable, rather than doing it as a box-ticking exercise, because the bottom line is we want to get to the end of this production without anyone contracting the virus so we can make it and deliver it on schedule. That’s our big thing and that’s what we drilled into people. If everyone does their bit, we should be able to keep the production running.”

Key believes Death in Paradise’s success is down to several factors: its winter scheduling on BBC1, the blend of detective and murder-mystery genres, and the fact that it’s family-friendly.

“You know exactly what you’re going to get and that, ultimately, is the thing it does,” he notes. “It delivers the hit you expect. We work really hard to make sure every episode gives you everything you expect. It is a crowdpleaser and we’re proud of that. We have done backstories that are slightly more hard-hitting than you might expect and we have also played with genre. Ardal O’Hanlon’s last episode was actually quite a dark story. I’m proud of that because it takes the audience by surprise a little bit and shows we can do things you weren’t expecting. But it was also sweet and funny.”

The Doctor Who-esque way in which the show regenerates every few years with a new leading detective and other new characters also helps keep things fresh.

“It’s the show you get no sympathy for doing,” Key admits, alluding to the production’s envy-inducing setting. “But it is a tough gig. You’re away from home for a long time and for our main cast in particular, to ask them to give up five or six months of the year to film abroad, it asks an enormous amount. We’ve been very lucky that with all of our leads, we’ve had a very collaborative discussion about how and when [they leave], so these things aren’t forced on us.

“Kris Marshall’s son was about to go to school and he said he thought this needed to be his last season. We said OK and we planned something. It’s a way for the show to reinvent itself, refresh itself and twist itself into a slightly new direction. Each time it happens, especially after the first [handover] from Ben to Kris, the audience see it as part of the story. They know the ingredients they love will always be there, even if the personalities involved will be slightly different.”

As for season 10, Little’s DI Parker will have to work out whether island life is really for him, having swapped Manchester for Saint Marie. Other returning cast members include Don Warrington as Commissioner Selwyn Patterson, Tobi Bakare as DS JP Hooper and Elizabeth Bourgine as Mayor Catherine Bordey, while newcomer Tahj Miles plays 18-year-old petty criminal Marlon Pryce. Filming is due to wrap on December 18.

“Florence has returned and she finds herself confronted by this new detective who she just can’t fathom out, and it allows us to play with some interesting tensions,” Key adds. “We’ve got some pretty big surprises lined up that I am ridiculously excited about. It’s going to be a good one.”