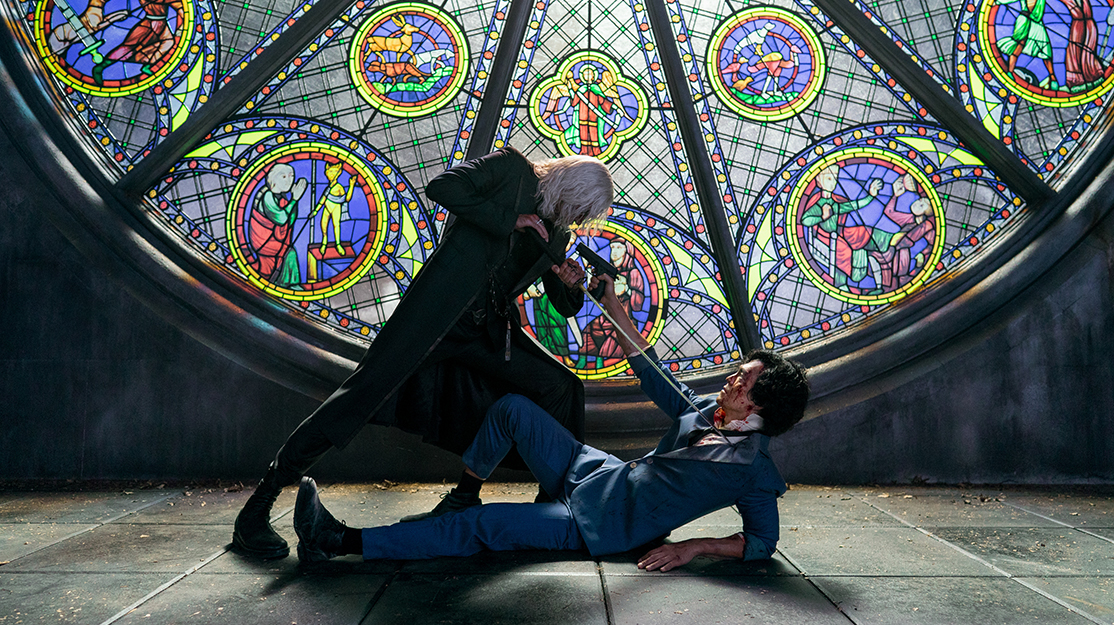 Return of the space cowboy

British actor Alex Hassell recalls the boot camps and fight choreography he faced to get into character as the antagonist in Cowboy Bebop, Netflix’s thrilling space Western based on the Japanese anime of the same name.

In November, almost three years to the day since the project was first announced, Netflix dropped all 10 episodes of Cowboy Bebop – a live-action remake of the thunderous, stylish and pacy Japanese anime. Described as a space Western, the action-packed series follows three bounty hunters, known as cowboys, all trying to outrun their past.

Together, Spike Spiegel (John Cho), Jet Black (Mustafa Shakir) and Faye Valentine (Daniella Pineda) form a scrappy, snarky crew ready to hunt down the solar system’s most dangerous criminals. But standing in their way is Vicious, Spike’s ex-partner and arch-enemy who is the most notorious hitman within crime organisation the Red Dragon Syndicate.

Alex Hassell, who plays Vicious, jokes that so far, his life hasn’t changed dramatically since Cowboy Bebop launched. Perhaps he’s enjoying the anonymity afforded to him in real life by his character’s long white hair. Hassell, however, is just happy viewers get to see it.

“After about three years from getting the part to it finally coming out, I’m really pleased that it’s in the world,” he says. “I joined really early on and then you set a date and it moves around depending on what’s happening. But we shut down for a year because John Cho tore his ACL. Covid happened as well – and it’s a big show with a lot of effects. The post-production just takes a long time and because of the way the schedule worked, we filmed it out of order so they couldn’t start editing episodes until it was all done.”

Through the audition process, Hassell read numerous scripts until he arrived on location in New Zealand to film the series, where he and the rest of the cast were told the full arc for the series – including a major twist involving Vicious.

“It was actually quite funny,” he recalls. “We were in a meeting. We didn’t know what happened past episode six or something. There’s a moment when basically we all went ‘what?’ about my character. And then they revealed ‘the reveal.’”

It was at that point the actor, whose previous credits include The Miniaturist, Genius: Picasso and feature The Tragedy of Macbeth, that he took a deep dive into the anime, which is now also available on Netflix. “I’ve become a big fan of it,” he says, although he believes it isn’t useful to compare it to the live-action series in which he stars.

It was the world of Cowboy Bebop – created through production design, angular camerawork, quick-cut editing and a jazz-inspired soundtrack – that first drew Hassell to this part-Western, part-noir, part-sci-fi adventure, and the way those initial scripts blended genres alongside the chance to play a very complex character and try his hand at some of the show’s most physical action sequences.

“I was really excited about having to learn to fight. And for me, I hadn’t been in 10 episodes of a show [before], so learning the process of that was really fascinating as well,” he says. “I’ve been part of an American show, but only in bits, whereas to be one of the main parts in it from the beginning and see the process of how scripts change, how it gets developed, how the collaboration works and what the hierarchies are in those sorts of structures was just fascinating. I can’t compare it to another big American show because I’ve not been on one but the scale of it in comparison to British stuff and how that works was fascinating.”

Vicious, he says, is “an incredibly dark, violent, sadistic, damaged, sick man who is very, very angry and has a very short temper and is on the verge of some sort of unhinged psychotic episode all of the time.”

Playing that kind of character “is definitely fun,” he adds, though there are also numerous “heavy” scenes that have an intense emotionality to them, not least some of those he shares with Elena Satine, who plays Julia, Vicious’s wife and the object of Spike’s desire.

“I have to work with Elena and be very threatening and physical with her, so I’m just uber focused that she’s ok and we’ll choreograph it and work it all out to a T,” Hassell explains. “There’s no danger. But then it’s fun to be in a different headspace. This is a very specific kind of world and whilst trying to be truthful, you’re also trying to make something that is fun, interesting and weird. At times, I would definitely ‘cut’ and giggle. Often the more sadistic shit I had to do, it kind of created these nervous giggles in me.”

A particular task on the show, which is produced by Midnight Radio, Tomorrow Studios and Sunrise Inc, was getting to grips with its “really weird, unusual tone,” and finding a way to portray that on screen. “It’s really difficult to work out,” he continues. “You can talk about it but you can only do it through finding it together. That was something, trying to be truthful but also trying to be ‘bebop,’ whatever that is. You’d hit on something and think, ‘Oh that’s bebop.’

“Me and Elena were in these really heavy scenes and we didn’t get to see what the other guys were doing – these light, poppy, fun scenes, knocking around, punching stuff. I thought, ‘Are we in the same show? I really hope so.’ So that was a big challenge. Every job I do is different but you never really know what the key is going to be, what the thing is that’s going to inspire you. But we had the anime, so that was a big part of it.”

The actor also found the physical aspect of his preparation helped him get into character, which amounted to a lot of training to change his body type but also learning how to fight with a sword. He felt it was important to perform stunts and fight sequences himself as much as possible.

“The stuntmen and women are absolutely amazingly good. But a central part of Vicious’s character is his violence and his use of his sword, so I wanted to know how to do that and be confident about that – and it was just so much fun,” he says. “Getting paid to fight like you did when you’re 12 years old is a gift.”

His training involved a month-long bootcamp that featured all the main cast before completing a further two-week schedule featuring fitness training, conditioning and weights. He also practiced tumbling, leaning how to fall, roll and dive, gun work and fighting with sticks and swords.

“Then once filming started, I spent a lot of time – many, many hours – with the stunt crew just going through fight choreography,” Hassell says. “It was not even choreography we would use. They don’t create that choreography until closer to the time, but it was just getting an understanding of how to use it and get skilful so we can have better choreography. Not that I had anything to do with the choreography, but the better I could be, the more they could get me to do.”

One scene in particular stands out, where in episode eight he’s fighting 12 people at the same time.

“I learned it in one go in a couple of hours. I used to dance, so choreography I can pick up fairly quickly, and also I’d done all this work and they’re amazingly good teachers,” he says. “They’re incredibly skilful. Then it was about getting it up to speed and learning what the story is, so it’s not just moves. I’m attacking here, blocking here, and worried this is going to hit me here, and I see this over there… and filling it with detail and flair and character. Then bits will change and the director sees the rough idea and they start to think about where they want to put the camera.”

The stunt coordinator and their team would also construct previsualisations of the fight sequences, filmed using members of the stunt team in T-shirts bearing the names of the characters they were playing. This would then be shown to the actors so they would better know what the scene involved and what it might look like from the camera’s perspective. They would then do it for real on sets that were largely built on soundstages – a cathedral, Vicious’ apartment and a temple among them – surrounded by green screen so that vistas and backgrounds could be extended digitally later on.

“The previs really helpful to see because you can see what you’re trying to do,” Hassell says. “Also, I learned the whole fight so I could do it in one go, but actually when you film it you just focus on these quick little elements.

“We also had Dutch angles [tilted cameras] a lot, so you could tell that lends to a certain sort of visual flair. We could watch the monitor [after a take] and they can show us bits and bobs. I would ask, ‘How are you thinking of cutting this together? What do you think the pace of this is? What is the tone of this scene from your point of view,’ so you know what sort of thing you’re acting in. You can tell a bit by how the camera is moving, or not moving, but not necessarily. We were just waiting to see what we were in. So much of that is down to the editing, the music and the special effects.”

Though the show won’t return for a second run, it’s the fights that Hassell remembers most fondly from filming Cowboy Bebop, which also called on him to ground his performance and character in what is a really heightened show.

“The storyline for me and Julia’s character is a kind of a gothic, Greek tragedy, so we were trying to ground it but allow it to have the scope it should have for this sci-fi fantasy world. That was challenging,” he says.

“But it’s so unique and unusual. Cowboy Bebop is best when you’re like, ‘What the fuck is this?’ and it’s something never seen on TV before. It crosses genres in such a brilliant way – Western noir films, 70s kung fu films and gangster films – the world building is just super exciting, the characters are so fascinating and it’s funny. It’s so many things meshed into one. It’s amazing that it works.”