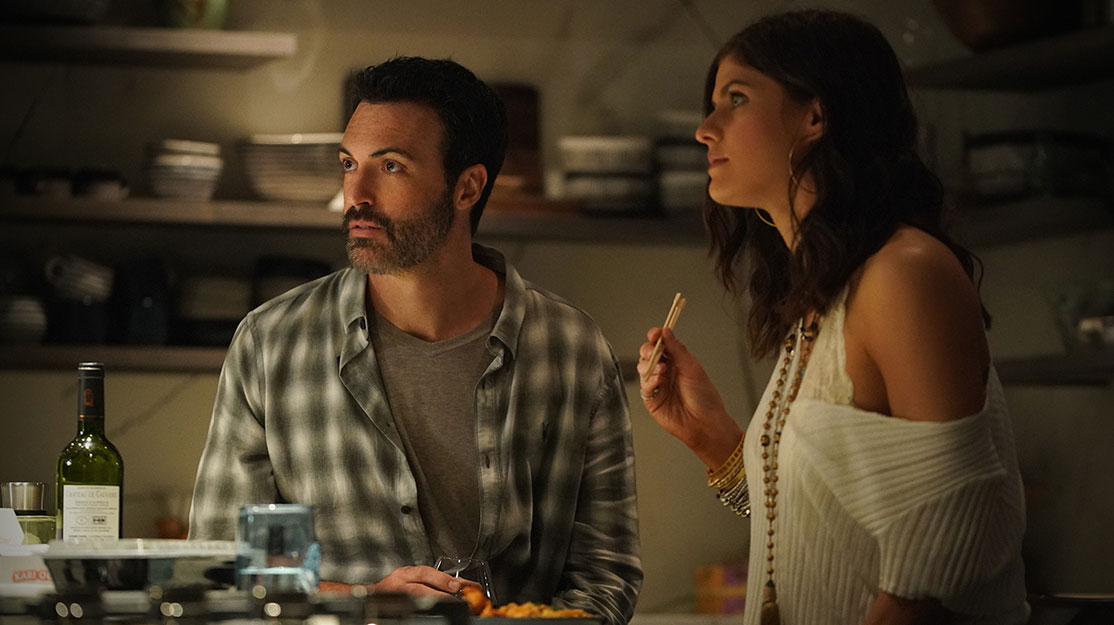 Reid between the lines

Reid Scott, best known as one of the stars of HBO’s political comedy Veep, tells DQ about his latest role in darkly comic drama Why Women Kill, which comes from the creator of Desperate Housewives.

Taylor and Eli’s story, set in the present day, is one of a trio of tales that weave their way through the 10-part limited series, each detailing the lives of three women living in different decades and dealing with infidelity in their marriages, examining how the roles of women have changed but how their reaction to betrayal has not.

Coming off such a successful, long-running series such as Veep, in which he played US vice-president Selina Meyer (Julia Louis-Dreyfus)’s highly ambitious and ruthless deputy communications director Dan, Scott would be forgiven for feeling daunted about what might come next.

But he says ending the show earlier this year felt like the right decision, while the opportunity to join Why Women Kill – which comes from Desperate Housewives creator Marc Cherry – was a risk worth taking.

‘It was so different from anything I’ve done recently but I guess that’s always kind of a point, to move outside of your comfort zone,” he tells DQ. “I read the script twice and obviously was well aware of Marc and his reputation. Then they started to build this really phenomenal cast. Ginnifer had come on board while I was reading the script, and then Lucy joined. I came on next, so I really felt great about the world they were building.”

“When I met with Marc and his team, it’s not Veep, it’s a different show. But these people are really dialled into something special.”

While Veep was often built around the exploration of ego and “how these horrible, despicable self-centred people move through their professional lives and what makes them tick,” Why Women Kill is the complete opposite, focusing on the emotional heart of each relationship. Viewers will get to learn something of the professional side of each character, but Cherry keeps the show’s lens on the nuances and intricacies of life for each couple.

In the case of Taylor and Eli, Scott says it’s a very complicated coupling, offering insight into a relationship dynamic that is becoming more socially acceptable. “I thought that was important,” he says. “I also like that, in the specific chemistry between my character and his wife, there’s a bit of a gender role reversal. He’s very much the beta to her alpha. I thought that was something that was important to portray, and it’s been fun. He’s a total departure from Dan, but that’s not to say he’s without his darkness. We get into some stuff. As the series evolves, you realise he has a very dark past and he has very specific demons that come back to haunt him. But overall, he’s a good guy, whereas Dan is not a good guy.”

The conflict and the ensuing fallout between Taylor and Eli comes from the fact they take a wrecking ball to their own marriage, the actor says. “You get that this is a good guy who loves his wife very much. But they throw a wrench into their own relationship and then they have to deal with it. Where the story goes, they’re forced to take the wrong path over and over and over and over. But that happens in life, because sometimes you can’t really see the forest for the trees. And before you know it, you’re in the quagmire.”

Scott, Howell-Baptiste and Daddario quickly became friends on set. But with the Spanish-style house in Pasadena in which all three of the show’s central couples live being the sole link between the stories, they would only see other members of the cast during the table reads for each episode, or if more than one of the storylines was being filmed on the same day.

As well as containing plenty of comedic moments, Scott’s storyline also called for some intimate scenes. “It’s a bit uncomfortable but it’s all very choreographed and we really trust each other, so we didn’t have too much trouble doing that,” the actor notes. In fact, he considers the biggest challenge making the series to be the fact this is the first season, with cast and crew still working out the show’s tone and style.

“But this is a collaborative art form,” he says. “You’ve got 150-plus people working on this thing, and everyone’s trying to figure themselves out and how they fit into the overall matrix of this production. There’s a lot of stumbling and false starts, but everyone really believes in this project and really comes together and gets it done. Part of the exciting thing about starting a new project is that you try to hit the ground running and move forward from there, and I think we’ve done a pretty good job.”

With projects such as Desperate Housewives and Devious Maids, Cherry has built a reputation for domestic stories with a wickedly dark sense of humour, striking a balance between comedy and drama. Scott says this continues with Why Women Kill, which blends lighter moments with thrills and scares.

“You can’t say it’s a comedy, you can’t say it’s a drama. Just when you think you might laugh out loud – bang – something else happens and it draws you back into the dramatic side,” Scott explains of Why Women Kill, which is produced by Imagine Television Studios and CBS Television Studios for US streamer CBS All Access. “It’s an interesting way to work and it’s really fun. One of the challenges was to make sure that we kept it reined in. You never want to go too darkly dramatic, you never want to go too over-the-top comedic with it. It was trying to strike that balance, and it’s hard work but, ultimately, I think it works.”

As for the title, is it a signpost to where the series is heading? “The audience is going to be very satisfied,” Scott teases. “The title definitely delivers. But there’s a twist. The murdered as well as the murderers are not necessarily who you think at the beginning. That’s part of the fun, trying to figure that out.”

Launching on HBO in 2012, Veep won numerous accolades, including three consecutive Emmys for outstanding comedy series and six for Louis-Dreyfus’s performance as the embattled Meyers. It’s little wonder that Scott describes working on the political satire, created by Armando Iannucci, as “the greatest job ever.” He continues: “I have a whole new family out of it. We grew so close to one another over seven seasons.”

He knew Iannucci’s work from equally sweary British political comedy The Thick of It, on which Veep is based, and film spin-off In The Loop. But despite becoming one of the must-watch programmes on US television, Veep was just a small show at first, says Scott.

“There was a different style of humour that we all believed in, and we just had fun doing it. Armando’s such a genius; he invented ways of shooting and he invented ways of editing. The way Veep was shot was unique and it was just a process that was really special. It’s never going to be repeated. There’s no chance you’re going to assemble that murderers’ row of incredible comedic writers, comedic actors and comedic directors and get that to happen again. But I’m so glad to have been there when that lightning struck.”

The process Scott alludes to involved plenty of creative freedom afforded to the show by HBO’s executive team, while Iannucci would fly the cast to London for intense rehearsals where the cast would go over and over the scripts, before casting them aside and improvising the scenes. The writers would then edit the scripts using some of the material created by the cast.

“Then we would do it all over again,” Scott recalls. “So it was a very collaborative process. That’s how we found the characters. That’s how we found what worked. None of us had ever worked that way before but, from an actor’s standpoint, it’s great because you really become the custodian of your character. Between each season, Armando would contact us and say, ‘Here’s some ideas I have for next season. What do you think?’ That never happens in television – no one does that. It really bolsters you and gives you this ownership of the character that makes you very excited to go back to work.”

That working method also proved to be a shock for the numerous guest actors who joined the show. “I remember when Gary Cole [senior strategist Kent Daviso]  and Kevin Dunn [White House chief of staff Ben Cafferty] showed up for the first time. They were like, ‘What the fuck is going on?’ They’d never worked that way. We were like, ‘Oh yeah, we’ve been doing this for three years now. We’re sort of used to it.’ Once you work that way, once you get used to it, it’s so hard to go back.”

On Why Women Kill, which is distributed by CBS Studios International, the script wasn’t quite ripped up and reassembled like it was on Veep, but Scott says Cherry did offer the cast the chance to offer their own thoughts.

“I was like, ‘I want to mix it up. I want to like tear the script apart and play with it.’ You should see the looks on the writers’ faces! Marc’s been very open to letting me play around with it,” he adds. “There’s certainly not as much improvisation as there was in Veep, but he’s been very encouraging and let me push Eli around a little bit – and Kirby’s a phenomenally wonderful improvisational actress too. So when they let us off leash, we really get to run. It’s pretty fun.”