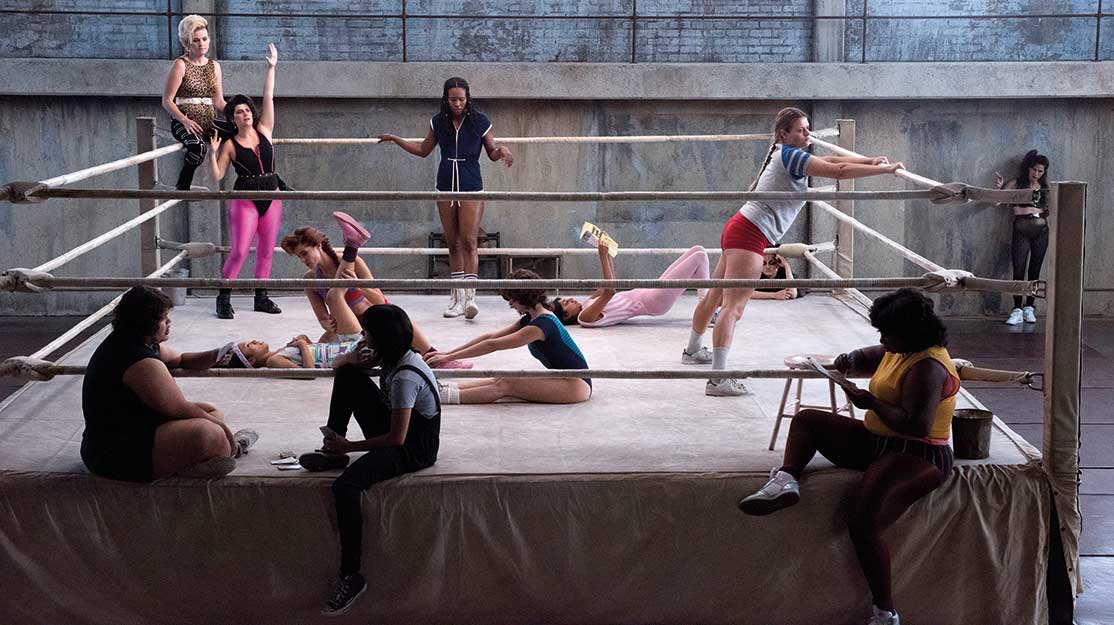 Sydelle Noel and Britney Young tell DQ why they climbed into the ring for GLOW, the forthcoming Netflix show about a group of women who are chosen to star in the first female wrestling TV series.

When it debuted in 2013, Orange is the New Black (OITNB) quickly became one of Netflix’s most popular original series. Like the streaming giant itself, the women’s prison-set drama has since gone from strength to strength, with its fifth season landing on Netflix on June 9.

It was only natural, then, that the streamer would also become the home of OITNB creator Jenji Kohan’s next project, GLOW, which launches on June 23.

Created by Liz Flahive and Carly Mensch, with Kohan exec producing, GLOW (which stands for Gorgeous Ladies of Wrestling) is the fictionalised story of an out-of-work actress called Ruth, played by Alison Brie, who makes one last attempt to live her dream by joining the cast of a weekly series about female wrestlers.

Inspired by the true story of the 1980s female wrestling league, a women-only version of the World Wrestling Federation (WWF), the series is exec produced by co-showrunners Flahive and Mensch, Kohan and Tara Herrmann.

Headlining alongside Brie are Betty Gilpin, Sydelle Noel, Britney Young and Marc Maron. Young plays Carmen, the daughter of a wrestling family who wants to continue that dynasty but is not yet prepared for the Hollywood limelight.

The actor’s route to GLOW came in serendipitous fashion: after reading about the series, she intended to email her agent about it – but never did. As it happened, the stars aligned when her agent secured her an audition without knowing of her interest.

“What excited me about Carmen was I am a bigger girl and I do sometimes have very strong features where I can play a mean girl and a bully just by a look,” Young says. “I found that some of the auditions I was going on were constantly for the mean girl, the bully, which is great, it’s work – but when they described Carmen as a gentle giant, I wanted to play her.

“I’m a bubbly, very talkative person and wanted to play something that was a little more my personality. So I was always drawn to that aspect. I also love the fact that, because I’m so used to playing the bully, playing a nice character has been something of a stretch for me. Carmen’s very challenging in that aspect and I appreciate that she has so many layers to her personality.”

Noel, meanwhile, says she was hooked on playing Cherry Bang – a professional stuntwoman whose career peaked in the Blaxploitation heyday and is now looking for a chance to be more than a body double – from the moment she read the script. “I told my reps Cherry was definitely the role for me,” she recalls. “Cherry is a former Blaxploitation stunt double for Pam Grier – Foxy Brown, of all people! I grew up watching Foxy Brown movies and I also wanted to do action movies, something where you’re being very physical, so when I read she was a stunt double and then she’s coming in for wrestling, this was hands down what I wanted to do. It just really screamed out at me. Then they also said she was the coolest chick you’d ever want to meet – now come on! She’s a stunt double and the coolest chick you’d ever want to meet? I was like, ‘That’s me, hands down!’”

When Young auditioned, she was asked to perform a rap and carry out a stunt, while Noel, a former track athlete, proved her agility by following the script to the letter. “It literally said that Cherry Bang says her line and then does a tuck roll and a spinning kick,” the actor explains. “Then she pulls out a gun and says, ‘Freeze motherfucker!’ So I was like, OK, and what I found out in the end was I had been the only person to do that. Everyone else just pulled out the gun but I did the roll and the kick.

“But there was nothing that was going to deter me from getting the role, so I did it on the hard concrete floor – I did the roll, jumped up and did a kick. Luckily I didn’t kick the camera. So I showed them I could do a little something in the audition room.”

Though Noel had maintained her fitness since her running career came to an end, wrestling was something entirely new for the actor to get to grips with. But under the watchful eye of professional wrestler and GLOW wrestling coach Chavo Guerrero Jr, the ensemble cast were put through their paces for five weeks in order to shape up for the fight scenes that were to follow.

“When we started training last August, that was my first time ever getting into a ring and it was an unbelievable experience,” Noel says. “A lot of people have this idea that wrestling is fake, but it’s a physical toll on your body. It’s definitely not fake. Before GLOW, I’d never done any wrestling but now I’m totally a fan. I watched WrestleMania and I’m thinking of moves we could do if we get a second season. I want to take it to the extreme.”

Despite fellow cast member Jackie Tohn twisting her ankle while filming the season finale, Noel says there were no other injuries on set – a lucky break for a show about wrestling. But that may have been thanks to the stunt team led by Shauna Duggins and Helena Barrett, who ensured all the moves were performed safely, even if it meant doing them more than once.

It was the training that Young believes brought the tight-knit ensemble together, so much so that they still communicate daily in a WhatsApp message group, five months after the production wrapped in December.

“Besides Kia Stevens [who plays Tamee], who’s an actual professional wrestler, all of us came in at the same level, and growing together really made us stronger as a team,” she says. “That is one of our messages on the show – this is a female empowerment show and we are showing that this group of different women can come together, form this team and be so supportive of each other.”

On set, showrunners Flahive and Mensch were constantly communicating with the cast, keen to ensure the actors were happy with their characters and seeking their input on everything from the script to hair and make-up. Kohan was also a regular on set, whenever she could reach LA in between shooting the fifth season of New York-set OITNB.

“They were very hands-on, which I really appreciated,” Young says. “During the pilot, they pulled us all aside for little meetings where we talked about our characters, explaining where they thought our character was going to go and how we should approach it. The stuff they write is so great and I love that they’re so excited to be there. They were on set every single time they were available. To see them laughing and giving us the thumbs-up was so reassuring and inspiring.”

Noel picks out episode two as a personal highlight, with Cherry showing her assertive qualities when she is handed the task of training the GLOW ensemble. Then in the finale, viewers will see how wrestling becomes more to her than just a job.

“I also had my big wrestling scene,” adds the actor, who has recently finished filming a part in Marvel’s upcoming blockbuster Black Panther. “So that was the best part ever. The crowd was really cheering us on. I had my managers and my agents come to see that scene and they were like, ‘I didn’t know you could do that.’ Neither did I! I definitely have wrestling on my resume now.”

Young describes herself as a “true fan” of the show. “People are really going to respond to it,” she adds. “It’s got something for everyone – the sports aspect, the comedy, the drama. A lot of people will hopefully relate to these characters and see themselves in them. I can’t wait for it to launch. I’m counting down the days.”

Netflix originals around the world

The launch of GLOW coincides with the broadening range of international dramas airing on Netflix. Here are some of the most recent…

UK: The Crown
Described as the inside story of two of the most famous addresses in the world – Buckingham Palace and 10 Downing Street – and the intrigues, love lives and machinations behind the great events that shaped the second half of the 20th century. Season two is in production.

Spain: Las Chicas del Cable
Set in Madrid at the beginning of 1928, when the national telephone company opens its headquarters and hundreds of women queue up to work as ‘cable girls.’ Starring Blanca Suárez, Nadia de Santiago, Ana Fernández and Maggie Civantos, it launched in April.

Brazil: 3%
This post-apocalyptic thriller is set in a near future when a select few are allowed to join a privileged society after undergoing an intense and competitive process. It stars Bianca Comparato, João Miguel, Michel Gomes and Rodolfo Valente, and a second season has been ordered.

Italy: Suburra
A crime thriller set in Rome that explores how the church, the state, organised crime, local gangs and real-estate developers collide and blur the lines between the legal and the illicit in their quest for power. Based on the novel of the same name by Carlo Bonini and Giancarlo de Cataldo, but set several years before.

Mexico: Ingobernable
Kate del Castillo stars as Mexico First Lady Emilia Urquiza, who wants to improve conditions in the country. But when she starts to lose faith in her husband (played by Erik Hayser), she finds herself at a crossroads where she must deal with a great challenge and uncover the truth. Renewed for a second season in April, a month after the series debuted.