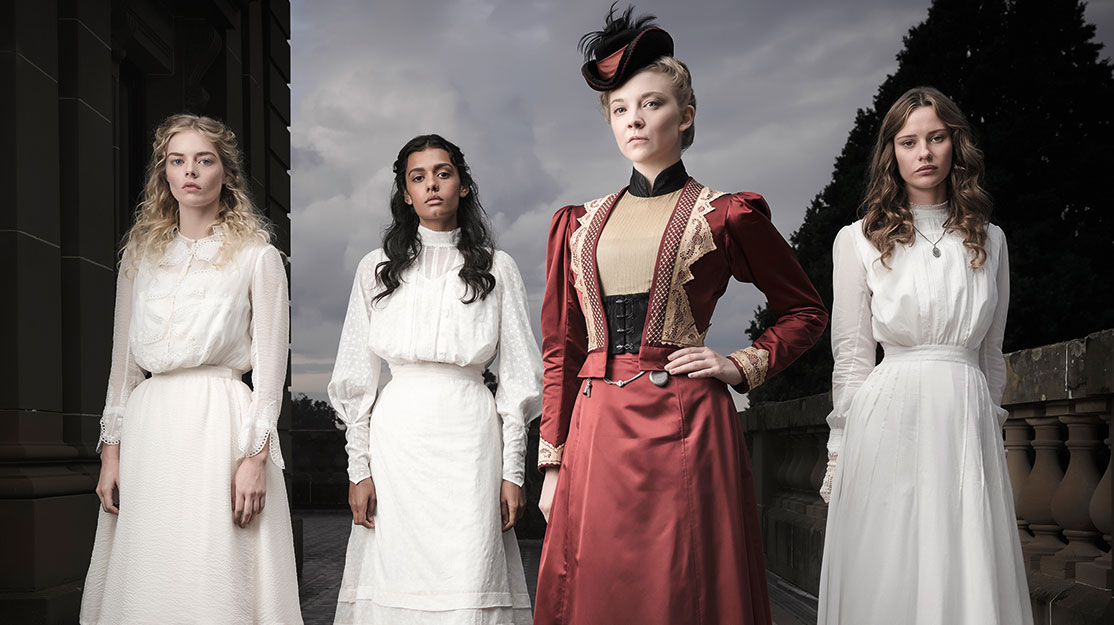 Shooting a reimagining of the iconic Australian novel Picnic at Hanging Rock was challenging but highly rewarding for cast and crew. DQ reports from the set of the six-part drama.

Primly dressed as a schoolteacher, Yael Stone is standing in front of a classroom of young girls in a historic building in Melbourne’s eastern suburbs, speaking gravely about Christ’s crucifixion and resurrection.

Playing religious studies teacher Dora Lumley, she draws a comparison between Jesus’ place of entombment and the caves of Hanging Rock, from where three students and a teacher had mysteriously disappeared a few days earlier, on Valentine’s Day 1900.

“Don’t be a doubter, like Thomas. Believe in Jesus and the dead will rise again,” intones the actress, best known as inmate Lorna Morello in Netflix’s Orange is the New Black. That prompts one girl to cry out: “They’ll come back here even after they’re dead!”

Amazon Prime Video came aboard as the US partner to the drama commissioned by Australia’s Foxtel in a deal trumpeted as the biggest ever for an Australian series in the US, surpassing SundanceTV’s investment in Top of the Lake: China Girl. Sales to several other key territories are pending, negotiated by FremantleMedia International.

While the budget is under wraps, another investor, state agency Film Victoria, estimated the production would inject more than A$11m (US$8.8m) into the local economy.

Directed by Kondracki, Michael Rymer and Amanda Brotchie and scripted by Beatrix Christian and Alice Addison, the high-end production is the first of a number of adaptations of Australian novels planned by FMA.

Jo Porter, FMA director of drama and one of the show’s executive producers, says: “It’s our first internationally facing drama production made in Australia. We want to make projects on home ground using Australian creative talent. We have optioned a few other books. Picnic is the first of what we hope will be many more of these ambitious projects.”

The idea to revisit Lindsay’s novel germinated internally at FMA and the rights were secured from Barbara Mobbs, literary agent for Lindsay’s estate. Fremantle developed the project with Christian, who wrote the series bible and the first episode, and Addison.

“Bea [Christian] is a deep thinker with a beautiful sensitivity,“ Porter tells DQ on the classroom set at the heritage-listed Wattle Park Chalet, which was built in 1928. “She has a unique way of seeing the world and the human psyche. Her writing is quite lyrical, at times strange and wonderful, with a contemporary feel which is such an organic fit with Joan Lindsay herself.”

Several broadcasters were interested in the project – which explores the fallout from the disappearance of the girls and teacher – but FMA’s relationship with Foxtel, for which it produces the female-prison drama Wentworth, helped cement the deal. Foxtel greenlit the show after Screen Australia approved its production investment in September 2016. Although that was before any cast had been attached, there was an understanding that a marquee name would be hired to play Mrs Appleyard.

The producers also wanted a female lead director who had experience in big-budget storytelling and would be able to attract a big-name cast. Christian Vesper, FremantleMedia’s executive VP and creative director of global drama, suggested Canadian filmmaker Kondracki, based on her work on such shows as Better Call Saul, Legion and The Americans.

Kondracki is a fan of both the book and Weir’s film, and has an encyclopaedic knowledge of Australian cinema since she did her Master of Fine Arts graduate degree at Columbia University. “What [writers] Bea and Alice have done so beautifully in the scripts is to capture a kind of novelistic quality,” she says. “Our task was to create a world that you want to spend time and linger in and get to know these characters. We have tried very hard to root all the ideas in the book, especially Joan Lindsay’s interesting take on the understanding of time and its impact on civilisation.”

Fellow director Rymer, who spent some years in the US directing episodes of series such as Marvel’s Jessica Jones, Hannibal (which he also exec produced), Longmire, American Horror Story and The Killing, was planning to come back to Australia to set up a TV series when his agent sent him the script. “My first instinct was, ‘Why would you want to do that, a remake for TV?’” he says. “Peter Weir’s film was powerful and worked very well. What were we going to add to it?”

Five or 10 pages, in however, Rymer says he found the script “very intriguing – not what I expected to read.” He also suggested bringing on board Brotchie, who was hired after the Australian Directors’ Guild (ADG) objected to Kondracki on the grounds that she did not meet the net employment benefit test set by the country’s immigration department and questioned why an Australian female director was not employed. When Brotchie signed on, the ADG withdrew its complaint. Subsequently, funding agency Screen Australia affirmed it would change its guidelines to rule out financing Australian television projects, excluding coproductions, if a foreign director is attached.

“I read the novel as a teenager and loved it, and I loved Peter Weir’s film,” she says of Hanging Rock. “The idea of being part of such an iconic Australian show was thrilling. On Girl Boss I was working on a similar budget level with a fantastic team and all the big toys. It’s the same skill set.”

Before signing on, Brotchie spoke to Porter via Skype, and arrived in Sydney a week before shooting was due to start to meet Kondracki on the set. Porter was impressed with Brotchie’s expertise in tackling her first drama after directing the Australian ABC comedies Lowdown and This is Littleton, observing: “She certainly held her own and has delivered a really lovely episode.”

Rymer concurs: “She got a lot of nuance and intimacy out of the actors, her shooting style was strong and simple and she knew what she wanted. Her biggest challenge was that she would plan very meticulously and then everything would be up in the air.”

Among the directors and producers, there was a 95% consensus on casting, according to Rymer. The process was complicated by the fact multiple other high-profile shows were casting at the same time and several actors dropped out due to scheduling problems, but they got the cast they wanted.

Kondracki directed the first three episodes, Brotchie helmed episode four and Rymer picked up five and six, although occasionally each worked on the others’ blocks.

In Weir’s film, Mrs Appleyard was played by the then middle-aged Welsh-born actor Rachel Roberts, so Dormer is a generational change. However, Porter says: “We did not deliberately go young. What we wanted was someone who had command and strength, and Natalie has that in spades.” The timing was also fortuitous because Dormer was looking for her next major role after playing Margaery Tyrell in HBO’s Game of Thrones.

McGahan, who plays the teacher who vanishes with the girls, marvelled at Dormer’s performance: “She makes incredibly complex choices and can execute them with no problem. Her craft is so exact. She had these complex monologues addressing the students, which required a lot of camera angles and very long days. Without a complaint, she would repeat these monologues flawlessly over and over again and would never drop a line. When the camera started to roll she was completely transformed, impenetrable.”

Similarly, Stone was impressed with the way Dormer brought out her character’s “truly chilling, quiet velocity.” The New York-based actress, who was born in Sydney, was keen to find another Aussie project after playing a cop in Deep Water, Blackfella Films’ miniseries commissioned by Oz pubcaster SBS.

For her audition tape she stuffed her lower jaw with toilet paper and adopted a nasal tone to impersonate Miss Lumley, a character who lacks authority, is unable to communicate with her fellow teachers and is not respected by the students. Then when she arrived on set she expected to be able to use prosthetics, but was told the budget did not stretch that far, so she used paper towels. Her performance starts out as comical but at the end will likely elicit tears from viewers, according to Porter.

Madeleine Madden’s casting as student Marion Quade marks another departure from the book and movie as the series’ only Indigenous character. “Marion prides herself on her intelligence and is really aware of the social prejudices of the era,” says the 20-year-old, whose credits include Tomorrow, When the War Began and the Indigenous series Redfern Now and Ready for This.

“Her father is white and her mother is Aboriginal. She is put into the school to be hidden away. This makes her aware of challenges that are unique to her and do not apply to the other girls.” As a further twist, Marion has a romantic relationship with one of the women in the college.

The logistics of filming in and around the labyrinth of Hanging Rock, which is 70km north-west of Melbourne, and numerous other locations in the state of Victoria and around the city, proved challenging for cast and crew, including director of cinematography Garry Phillips, production designer Jo Ford and costume designer Edie Kurzer.

Porter says: “It’s been physically a really, really demanding shoot. We’ve been out in the bush and we spent a full week at the rock, with three units filming up there at one point. No wonder Peter Weir was 23 when he made the film, because you have to be a mountain goat, going up and down that rock.”

Kondracki devised a novel plan to elicit ideas from the cast and crew, offering a bottle of wine in return for innovative suggestions that ended up on screen. The best involved creating a “curtain” of water for one scene filmed on the top of the rock, which entailed several crew members lugging 1,000 gallons of water in buckets up the 106 metre-high rock.

Each director had a different filmmaking style, which was embraced by the actors. McGahan describes Kondracki as “a radical, a fire; with her, you get all this adrenaline,” Rymer as a consummate professional and visionary and Brotchie as an actor’s director who involved herself in all the choices the actors made. The partnership with Amazon Prime Video also enabled the producers to increase the shooting schedule to 13 weeks and to extend the second unit’s workload.

Weir’s film famously ended without revealing what happened to the missing teacher and two of the girls (one returned, but had no memory of the event). The series, launching down under in 2018, canvasses various possibilities: were they kidnapped? Did they escape? Did they go into a time warp? Were they abducted by aliens?

Rymer says: “We put a lot of emphasis on character, who these girls were and what they wanted. Hopefully what we say is more interesting than what happens to them, and we preserve the mystery. Hopefully viewers will be at the water cooler arguing vehemently about what happened to the girls.”

More broadly, Kondracki adds: “For me, the show is not about what happened to the girls as much as why they wanted to climb the rock in the first place.”