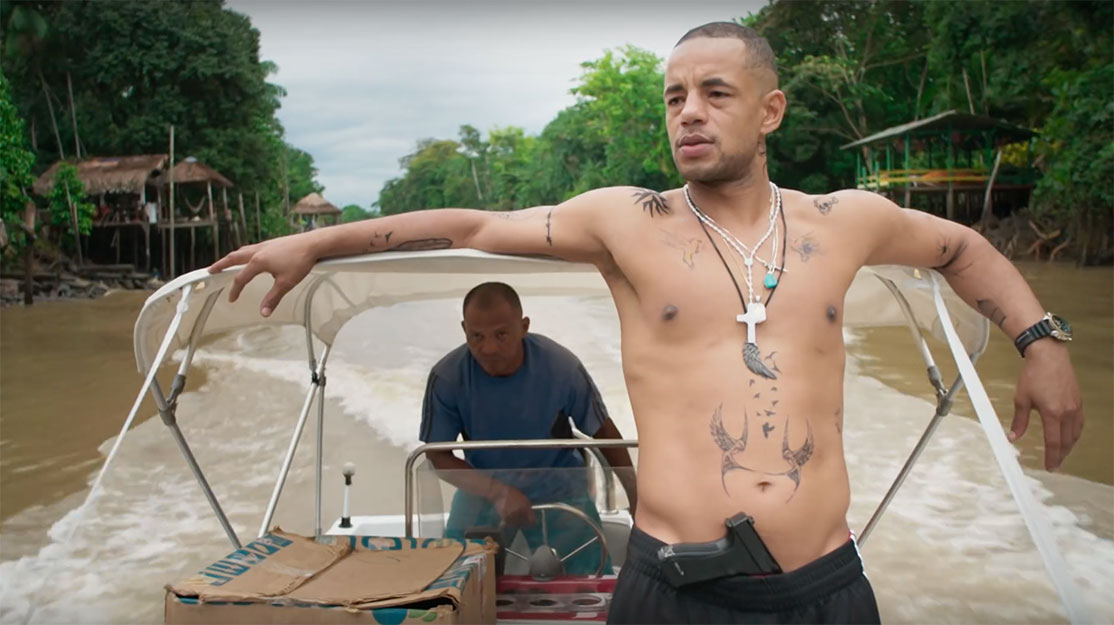 A news anchorman goes to dangerous lengths to draw huge ratings to his show when he begins to cover the gang wars playing out deep in the Amazon jungle. DQ speaks to Intro Pictures’ Simoni de Mendonça and Lucas Vivo about Brazilian thriller Pacto de Sangue (Blood Pact).

Some people will do anything for ratings. That’s the case for reporter Walter Souza, the central character in Brazilian drama Pacto de Sangue.

Produced by Intro Pictures for Turner-owned Canal Space, the 10-part series centres on Souza, who discovers that using extremely violent content will help bring massive audiences to his programme.

What is the story of Pacto de Sangue (Blood Pact)?
De Mendonça: It’s the story of a reporter, Walter Souza, who sees an opportunity to get big TV ratings through raw, violent content. With the help of his ex-cop brother, he gets involved with Trucco, a big local Narco in [the Brazilian state of] Amazonas and starts covering murders and gang wars that occur between Trucco and the other big drug lord of the area, Amaral. He slowly starts getting more and more attention and becomes a celebrity anchorman. At the same time, the disappearance of a young woman from São Paulo brings an alcoholic, foul-tempered detective, Moreira, to Belém de Para, the gateway to Amazonas, as the body of the girl appears floating in one of the many rivers in the jungle.

What are the origins of the show?
De Mendonça: Lucas likes characters who don’t belong in their own place and time. Moreira is one of those. He’s extremely loyal but has no discipline to follow orders. He does things his own way.
Vivo: I always liked the idea of sending a big-city detective to investigate the case of a missing young girl in the jungle. The fish-out-of-water experience was something that definitely interested me a lot in the beginning of the conception of the idea.
De Mendonça: Furthermore, in Pacto de Sangue, we address different subjects that are really violent but common in any Latin American suburb, such as human trafficking, drug trafficking, sicarios [contract killers] and the fight over power and territory between gangs. All this is seen through the media’s point of view, which is never fully impartial. In a sense, it is a critique about what is journalism today in many Latin American countries.

How was the story developed for the network?
De Mendonça: We had the story developed, with synopsis, character descriptions, all the drama of season one and cliffhangers for a possible season two. Once [Space owner] Turner agreed to move forward with the project, we brought together a screenwriting team with Patricio Vega, who also directed, and started working on the scripts. Turner’s involvement in collaborating on the scripts started at that point and finished once we finished the whole writing process.

How would you describe the writing process?
Vivo: It was a hell of an adventure. For me it was my first big experience in this genre, which I so much love. It took us 10 months to fully write all of the series episodes. Taking into account that it took me over six months to develop the concept idea, storyline and characters, it was a very long, very tough, very rewarding process.

How did you work with the director to develop the visual style and tone of the series?
De Mendonça: Lucas already had in mind what kind of narrative wanted for the series. It had to feel very real, very human and very raw – life as it is. It had to have the natural beauty, cultural feel and violence as seen on Latin American news, not the fiction of a Hollywood film. The use of hand-held cameras and natural lighting was encouraged from the beginning. This is why Adrian Caetano was the first pick to direct this series, followed by Thomas Portella.

Who are the lead cast members and what do they bring to the series?
De Mendonça: Guhilerme Fontes plays Silas Campello, the greedy anchorman who neglects his family and is all about getting to the top. It was a perfect role for him. He brings some particular freshness to the anchorman role.
Ravel Cabral plays Moreira, the tough São Paulo detective who has to step out of his comfort zone and travel to the middle of the Amazonian jungle, to Belém de Para, to investigate a corpse that may match a missing girl from São Paulo. He is awesome in the role. Besides fitting perfectly the physicality of the role, he is a very well trained actor, very versatile and convincing.
Vivo: He brings real drama to his character, and he is very good at the physical aspect that was required for his role.
De Mendonça: Andre Ramiro plays Soares, the detective from Belém who has to work beside Moreira during his stay in Belém. He is the counterpart of Moreira – a thinking nerd, but a very brave and reliable officer. I liked Andre’s work since I saw him in Tropa de Elite. I had always thought of him for this part from the beginning.
Trucco is played by another great actor whose work I’ve been following: Johnathan Haggensen. He brought to the Narco role a tough and cold-blooded look but with empathy and sensitivity as well when it comes to helping his community.
We also invited other renowned actors to be part of the cast, including Mel Lisboa, Gracindo Jr and Fulvio Stefanini.

Where was the series filmed and how were locations used in the script?
De Mendonça: The series was shot between Belém de Para, the Amazon Delta and São Paulo. We took those three universes and the contrast between each one is very appealing to watch. We went from a huge crowded city like São Paulo to a small northern Brazil city such as Belém de Para, where the colours and the culture are very different from the ones in São Paulo. To this, we added the Amazon Delta, which brings mystery and more beautiful scenery to the series. Something I really like about Pacto de Sangue is that you can really feel Brazil running through its veins.

What were the biggest challenges during production?
De Mendonça: Shooting deep in the Amazon was very tough. We had big boats as hotels for both cast and crew when we shot action sequences in the jungle. We had a very big team, with very big challenges, shooting in the middle of nowhere. We’re happy we could pull this off without any major problems. Our production team did an outstanding job.

How does Pacto de Sangue stand out from other television dramas in Brazil?
De Mendonça: For its story, its production values, the amazing job Portella and Caetano did in directing and because we managed to bring together an amazing cast.

What do you hope viewers take away from the series?
De Mendonça: Viewers should enjoy 45 very entertaining minutes each time they watch an episode. Our job is to entertain – and this is no easy task. If we get there, then we achieved our objective.

What are you working on next?
De Mendonça: We are writing a new project for Fox with production scheduled for 2018. It is a thriller that takes place in a psychiatric ward. It’s going to be amazing. For this project we hired the Slavich brothers, Walter and Marcelo, as writers.