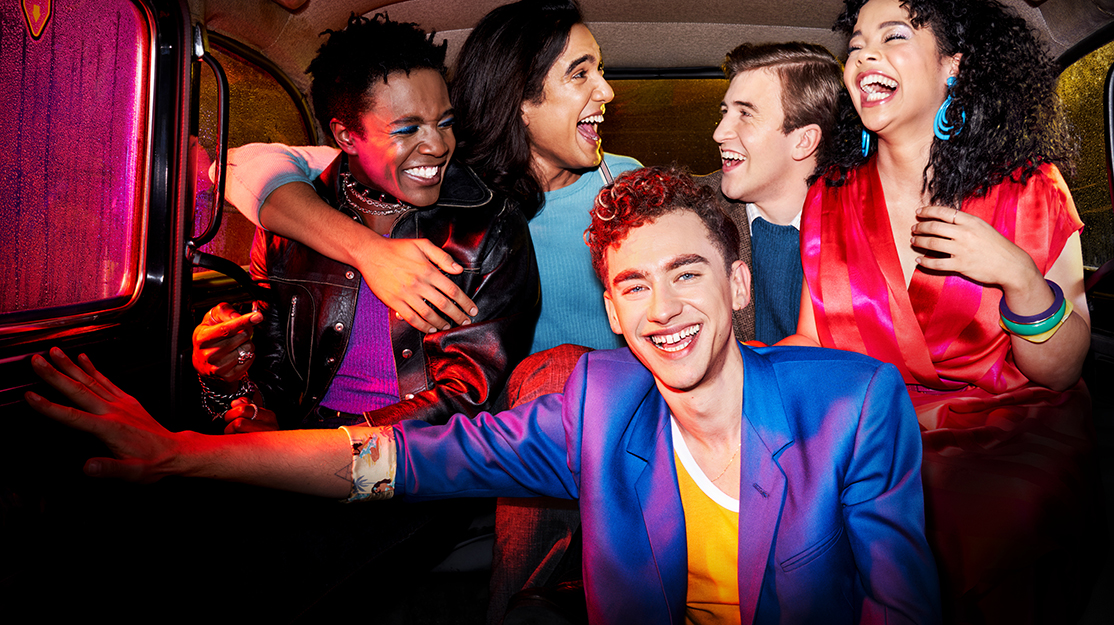 DQ visits Manchester to watch filming for Russell T Davies’ latest drama, It’s a Sin, in which four friends share joy and heartbreak as they grow up in the shadow of AIDS in the 1980s.

Manchester may not be the obvious place to see a Routemaster double-decker bus, let alone one from the early 1980s. Yet here is a Number 159, parked by a billboard advertising Dortman Electronics (‘Bring the Magic Home with Cinema Stereo Sound’).

“I think it’s rather convincing,” laughs Queer as Folk and Years & Years creator Russell T Davies, whose latest series It’s a Sin uses the city to double for London. “To find 1980s London in London, we’d have had to shoot in one little corner of Soho – it’s just the location map Channel 4 puts in at the end of the credits that gives it away.”

Both men are chortling at the chutzpah of Davies casting New Mexico-born Harris as Henry, mentor to Howells’ Welsh greenhorn Colin and a plummy English gent. “I was taken aback, but I said yes right away,” says Harris. “Queer as Folk was important to me in terms of ways to be sexy, at a time when there weren’t a lot of examples on TV to emulate.”

It’s a Sin has been a long time coming,  but for Davies the time is indubitably right. “It took me a long time to work out where I thought I could find things to say that haven’t been said. For me, the basic gay experience in the 1980s has never really been fully explored, certainly on television. So many people died of AIDS in the 80s and their parents said it was cancer. It’s still said to this day. Those false memories can become fixed and untruths pass into history, so it feels like time to say this is what really happened.”

Produced by Red Production Company and based by Davies on first- or second-hand memories, the five-part series is rooted in the desperation, trauma and terror of the era, but also finds the joy, “the strangeness and wild hilarity of it.”

While most viewers will be all too aware of the truth behind the rumours of a “gay cancer” from across the Atlantic, these are lives lived to the full and without foreboding, embodied by the glorious defiance of the Pet Shop Boys’ hit after which the show is named; the series is driven as much by the irresistible soundtrack of 80s classics as by the vivid dynamism of Peter Hoar’s direction.

The tight-knit onscreen dynamic is rooted in real-life, with the young leads forming an enduring bond that got them through both some very emotional filming and lockdown, thanks to Howells’ way with a Zoom quiz. “I felt like I was witnessing a family that had known each other a long time,” says Harris. “I’m the elder statesman thinking, ‘I’m not sure they’re aware of what this piece of work could end up accomplishing.’”

The veteran-newcomer pairing of Harris and Howells is reflected across the series: Roscoe has a fling with Stephen Fry’s archly hypocritical Tory MP; budding actor Ritchie seeks advice from his agent Carol (Tracey Ann Oberman), and puts up fronts for his emotionally distant parents (Keeley Hawes and Shaun Dooley).

“Those older actors flocked to the project,” says Davies. “Every one of them rattled off a list of friends [who have passed] and the conversations on set were extraordinary. Not a day would pass without remembering someone and reviving their memory.”

This is central, say Howells and Hawes, to the importance of It’s a Sin. Quite apart from its weird prescience in the Covid era, with characters donning PPE in isolation wards, attempting social distancing, hand-washing frantically and engaging in conspiracy theories over the origins of a virus, It’s a Sin stands as both act of remembrance and eye-opener for younger generations.

“None of my children had any idea about all this,” says Hawes. “The fact that AIDS was a death sentence, or that so many people like Valerie genuinely thought you could catch it by holding hands and so on. I remember the adverts with the headstones falling, Diana having her photo taken in the HIV/AIDS wing. It shouldn’t be forgotten.”

“I’m excited for my generation to watch it,” enthuses Howells, with the show debuting on Channel 4 tomorrow (January 22). The boxset will also be available on streamer All4, with All3Media International handling global sales. “I wasn’t massively educated on this period, so we’ll see how lucky we are and how much progress has been made since then, but also what still needs to happen.”

Yet for all the big names, Alexander’s involvement is perhaps most striking. Prior to finding global pop stardom with Years & Years, he had racked up an impressive acting CV on Penny Dreadful, Skins, Pure and Mike Newell’s Great Expectations. His last role, however, was in 2015.

“I didn’t have any plans to get back into acting,” he admits, “but I jumped at the chance as soon as I heard Russell was making a new TV show. He’s a hero of mine, a man who has been at the forefront of queer representation on TV for a long time. I read for Ritchie and I thought it was a bad audition because I was so nervous. Even on set it was overwhelming sometimes – I definitely had a few moments where I thought, ‘What the fuck have I got myself in for?’ But you could have an entire career and never get a job this good, so I didn’t want to mess it up.”

Alexander could also relate to Ritchie’s tendency to either cover anxiety with performance or run from it. “Ritchie’s from the Isle of Wight and I grew up in a few small towns, so I understood why he wanted to leave as soon as he could. Ritchie is motivated by fear, always trying to get ahead and push everything behind him and ignore it. Shame and how we internalise it is so insidious, but uncovering history like this is so important – it helps to apply what you’ve learnt to your own life. Most of all, I hope this show starts some conversations.”