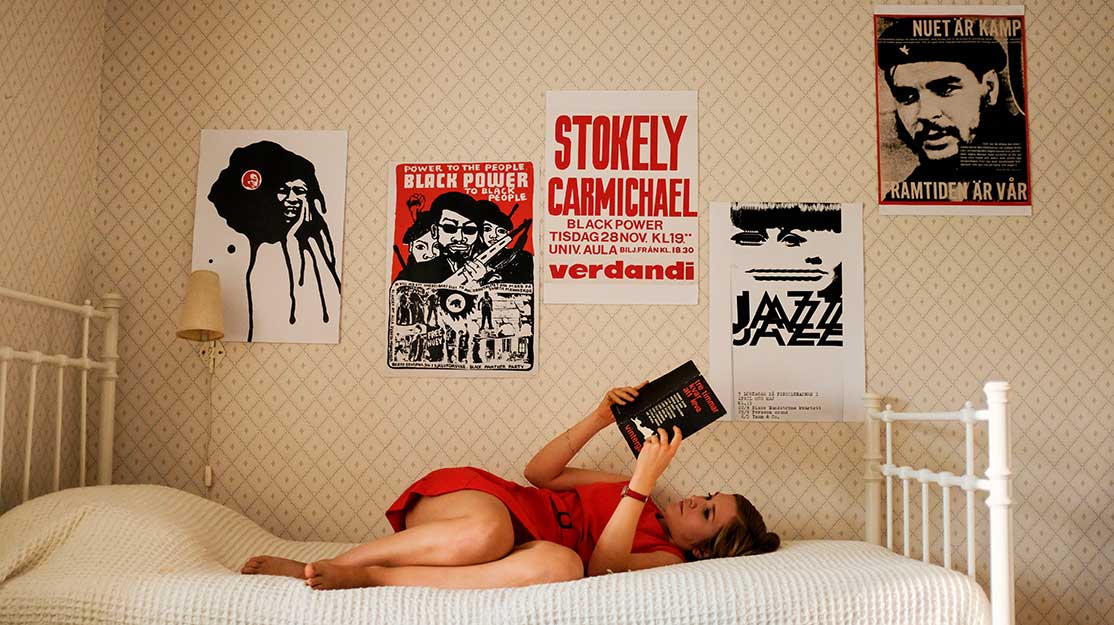 Two friends cause a stir in a small community where global protest movements have barely touched the surface in Systrar 1968 (Sisters 1968). Writer Martina Bigert and producer Emma Åkesdotter Ronge tell DQ about the period drama.

At a time when protest movements led by gilets jaune (yellow jacket) demonstrators have led to unrest in Paris, a Swedish period drama harks back 50 years to a period when the French capital was also struck by civil unrest.

Systrar 1968 (Sisters 1968), a three-part miniseries commissioned by SVT, tells the story of politically minded journalist Karin who is unable to land her dream job at a big Stockholm newspaper and instead lands a job at a small-town title. Armed with her typewriter and joined by rebellious artist friend Lottie, they each rent a room at the home of newspaper owner Georg – and within days they have caused a stir in the small community that is seemingly untouched by events in Paris that same year or similar protest movements in the US.

The origins of the project, produced by Anagram, lie in Group 8, a feminist organisation founded by eight women in Stockholm in 1968. They highlighted issues such as childcare and equal pay, and the group quickly spread across the country.

“I wrote this with my co-writer Maria Thulin because of them,” explains screenwriter Martina Bigert. “They did so much for Swedish women so I wanted to celebrate them, because some of them are now around 70 to 75 years old and some are no longer with us. We have had drama like this before but not from the female eye.

“This is really a fantasy about these women. I focus on two or three of them and have created my own story about them with Maria.”

Karin, played by Mikaela Knapp, is quite radical. After searching endlessly for a job in Stockholm, she finds herself in a small village with her friend Lottie (Maja Rung) and her boyfriend, who is a member of the Communist group NFL, where they begin to spread their message and cause upheaval.

“This group of women, Group 8, was the inspiration for the story, but the show is totally fictitious and it’s really these young female characters that drive the story,” explains producer Emma Åkesdotter Ronge, speaking with Bigert to DQ at Série Series earlier this year. “Two of them come from Stockholm to this small village in the south of Sweden. They are intellectual and radical and they know how to grab things by the horns.  In the house where they live, there is a girl who is the same age, in her early 20s, and they start to influence her and also her mother, a housewife.”

Bigert reveals she has been working on the project since 2011, but notes its timeliness in the age of #MeToo and heightened awareness of sexual harassment. “In Sweden when I talked to the younger generation, I found out they don’t know so much about these women,” she says.

Ronge picks up: “It’s definitely a relevant topic and I think it’s good that we’re reminded that others fought for the rights that we might now take for granted.”

Setting the drama largely within the confines of a family environment also draws the themes and issues of the story into sharper focus. “Everything is so small, it’s not a big drama,” Bigert notes. “But from a female perspective, it is a big drama. So if you put it in the right setting, you can make a big drama from just the small details and I find that interesting. They don’t have to kill each other.”

The three-part miniseries debuts on SVT on Christmas Day and will also air across Scandinavia on YLE (Finland), NRK (Norway), DR (Denmark) and RUV (Iceland). “We really want to reach young girls because they’re the ones who are driving the story and they can watch it together with their mothers, fathers and brothers as well,” Ronge adds.

Bigert and Thulin had previously written together on Swedish drama Gynekologen i Askim, which won the Kristallen award for best drama in 2008. In developing Systrar 1968, they collaborated extensively to construct the storyline. And with Bigert based in Paris and Thulin in New York, they were able to write around the clock thanks to the fact they were based in different timezones. “I wrote one day and she wrote the next, so in the end we don’t know who has written what. It’s a really good way to work,” Bigert says.

The project came to Anagram in spring 2017, and director Kristina Hulme (Before We Die) came on board and collaborated on the script before shooting began on location in southern Sweden.

“It’s a challenge to do a period drama. We’re shooting everything on location,” says Ronge. “We have a fantastic art department that dresses all the sets on location but it’s been a challenge to find the settings and make them look right. The local authority has taken down signs and everything.

“Costumes are a very big thing because we have 200 or 300 extras and all of them have to come in for costume and make-up. We have a big room just filled with costumes and wigs.

“In a lot of period dramas, you have this gritty, brown, smoky feel. But one of the things that made me want to produce this was that the visuals would be light and airy and would have the feel of summertime.” The series was previously titled Summer of 68.

Bigert and Ronge are now imagining a second season that follows Karin into the 1980s, where she might rise into a management role, leading to an exploration of being a female boss during that decade.

“What would be interesting would be to follow the main character, Karin, and how she develops in her work at the newspaper because she becomes a boss in that period,” Bigert says. “It would also be interesting to see what happens to these people when they are young and radical and then some of them change because of money.”

Regardless of whether that next season emerges, Systrar 1968 is latest drama to tap into a trend across Europe that sees countries look back on their own history, such as fellow SVT series Vår tid är nu, known internationally as The Restaurant. It’s proof that as we move forward, there is still much to learn from the past. https://dramaquarterly.com/preparing-a-feast/