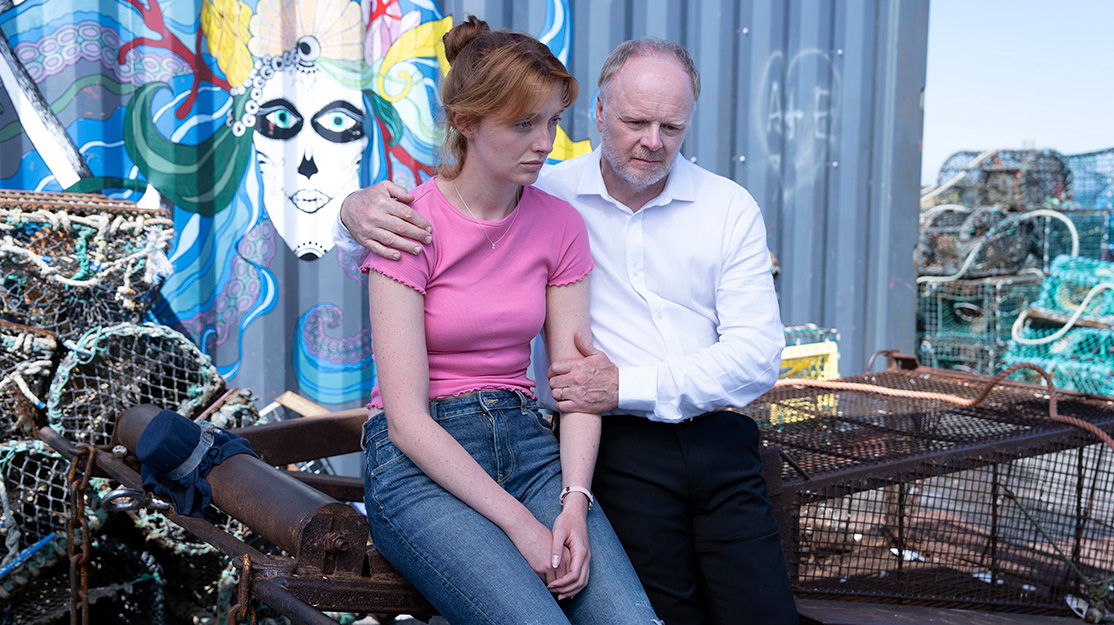 As one of the busiest actors in UK television, Jason Watkins reflects on some of his biggest roles to date and tells DQ why he wanted to break new ground with psychological thriller The Catch.

Over a 30-year career that began with a role on BBC soap EastEnders, Jason Watkins has become one of Britain’s busiest and most versatile actors. But whether he’s playing former prime ministers Winston Churchill in SAS Rogue Heroes and Harold Wilson in The Crown, or a supermarket manager in comedy Trollied, his plan is having no plan at all.

“Who knows what choices people make,” he ponders. “You come out of drama school and you think, ‘I’m going to do Marvel films.’ But I don’t have a target. My ambition is not driven to be a film star. If that were to happen, I’d rather it was because of the work I’ve done, what excites me and what I find interesting. So I have no discerning criteria about popular stuff or niche stuff or strange stuff. I don’t really have those filters.”

Families with young children might most easily recognise Watkins from his turn as intense and ultra-competitive school teacher Gordon Shakespeare from the Nativity films, while comedy fans will recall his turns in Trollied and BBC spoof W1A. More recently, he starred in crime drama McDonald & Dodds, true crime miniseries Des and fact-based A Very English Scandal.

Most notably, he won a Bafta for the title role in The Lost Honour of Christopher Jeffries, about a man in the eye of a media storm after being wrongly suspected of murder, while another high-profile role came as a whistleblowing forensic officer in season four of Line of Duty.

“I’m a bit scatterbrained so I’ll take anything,” the actor admits. But it’s his performance in supernatural drama Being Human that he credits as his breakout role. He played a vampire called Herrick in three seasons of the BBC comedy-horror, which centres on a flatshare between a ghost, a vampire and a werewolf.

“I’d done lots of theatre and telly, and often there would be cameo parts in series – ‘Who can we get to play this weird character? Watkins!’ I did Being Human, it was a great hit and it carried on after I’d been killed,” he says. “That was a break in terms of TV. That helped and then Christopher Jeffries really cranked it all up.”

Despite his storied career, his latest role sees him stepping into new territory with Channel 5’s psychological thriller The Catch. Watkins plays Ed, a proud husband, father and local fisherman determined to keep his family together in the face of historic tragedy. But when rich, handsome Ryan (Aneurin Barnard) enters his daughter Abbie (Poppy Gilbert)’s life and threatens to take her away from him, Ed finds his life spiraling out of control as secrets and lies emerge from the past and he seeks to discover the truth about Ryan.

When he first read the part, Watkins was drawn to the idea of an ordinary man drawn into a series of extraordinary events as he tries to keep his family together.

“He’s a guy under pressure,” he explains. “He’s a fisherman. That’s not an easy job, particularly economically, and he’s under stress. They lost a child 10 years ago and he’s not really dealt with that, so that’s coming to the surface because his surviving child is now going to fly the nest. And these are all familiar things. Those sorts of things will connect with an audience irrespective of the genre or if it’s a thriller.”

Ed is also losing business to a rival firm, while his mother-in-law Phyllis (Brenda Fricker) – who is suffering from the effects of dementia – is living with him and his wife Claire (Cathy Belton). “So it’s all starting to rack up for him and then in comes this new boyfriend and Ed starts identifying him as the problem,” Watkins continues. “In a way, it’s an easy thing to point your anger and discombobulation at, because it’s an easy target. He’s traumatised, he’s had loss in his life and he’s not worked that out, and now all these ghosts are starting to play on his mind, consciously and subconsciously.”

Produced by Projector Pictures in association with Night Train Media, and distributed by All3Media International, the four-part series was filmed last year in two blocks of two episodes each. To know where his character was at any point, Watkins posted the whole timeline of events on the wall of the house where he was staying during production, so he could map it out and then refer to it as often as he needed. It’s a technique he has used on other projects, but he notes that he tends to have a different approach to every project.

“Working on The Crown is incredibly different to working on Trollied, so why would you employ the same system? It’s acting, I’m just pretending,” he says. “If you’ve got something rigid, then you need to deconstruct it before you can succumb to the process and what everyone else around you is doing.

“With The Catch, Poppy, Brenda, Cathy and I all got on so well and we all cared deeply about the project. In the first week we did all the family stuff and I found it was almost better off the page, like a real family drama. And Poppy and Aeurin could just trip those lines incredibly realistically and very real.”

Yet because he plays so many varied roles, Watkins admits it can take him a couple of takes – or even days – to find his rhythm and settle into a character.

“Sometimes it might take half a day and then you’re like, ‘OK this is it,’ so I’m not just trailing out the same thing I do all the time,” he explains. “I remember I started pitching Terry Gilliam something in the film I did with him, The Man Who Killed Don Quixote, with Jonathan Price and Adam Driver. We’re doing this scene and he was quite quiet – he’s never quiet – and then he said, ‘OK, that’s it. Whatever you were doing before, that’s it now.’”

Then once he has found the right level of performance, Watkins says it’s equally important not to play a character the same way with everyone they meet through the course of a story.

“We’re all very different and we have different sides to us,” he notes. “In The Catch, Ed has a different relationship with his friend Bob [Ian Pirie] from the one he has with Cathy, his daughter and his mother-in-law. At some point a private detective is also involved and he’s never met anyone like that before, so he behaves differently with all these people. In The Catch, there’s a lot of that. He’s probably trying to be who he thinks he should be when he needs to make a clearer or better decision, but he’s deaf because he’s so concerned about protecting his daughter, his life and his marriage.”

Watkins also had to dial up Ed’s anxiety levels through the miniseries and was conscious of asking director Robert Quinn how far to push his performance at various points during filming.

“You want the audience to be in your head, that’s the thing,” he says. “Christopher was like that, because he didn’t reveal much as a person so you were drawn into what was he thinking, what’s he going to do next. It’s the same with The Catch – what the fuck is he doing? Why’s he doing that?”

To make Ed as human as possible, Watkins wanted to feel at home on a fishing boat so viewers would believe he was a fisherman. He even drove the boat himself, which gave him an extra sense of ownership over the character. “I felt it was my world,” he says. “But other than that, I wanted to be panicky and crap, and I wanted the audience to think, ‘Oh bloody hell’ and bring them with you.”

Watkins is now eyeing potential future series where he could double up acting roles with either directing or executive producing. “I am ready,” he says, “because I’m often the oldest person on the set. I’m very experienced and I think I’ve got a lot to offer. I’m thinking about doing something this year.”

Fans can still look forward to seeing him on screen in Prime Video’s upcoming Neil Gaiman adaptation Anansi Boys and in ITV’s Archie, a biopic of the man who would be Cary Grant. Until then, he hopes viewers enjoy The Catch, which launches on Channel 5 today, as much as the cast. “It was a real joy discovering the series with that group of actors because they were so delightful and put themselves on the line emotionally and were so committed to it,” he says. “I think and hope audiences will feel that, and when it cranks up to its more thriller aspects as we go through it, it’s a really thrilling journey.”