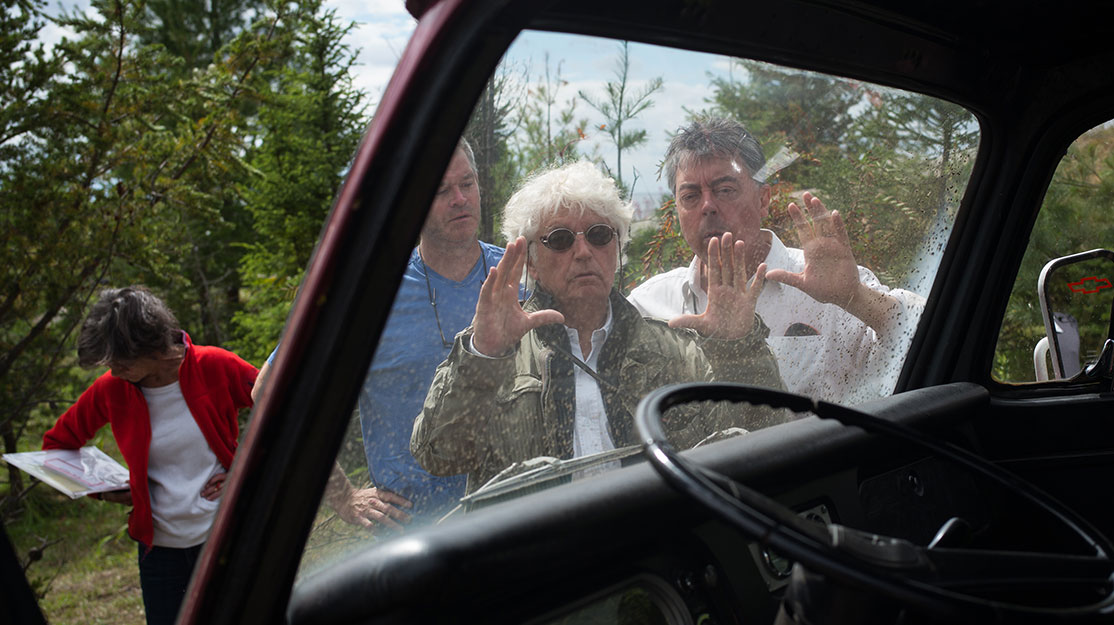 French director Jean-Jacques Annaud takes the reins and actor Patrick Dempsey returns to the small screen in The Truth About the Harry Quebert Affair, a 10-part murder-mystery series from Epix, MGM and TF1. DQ visits the set.

But for the sign that reads ‘Maine State Police Station’ and the fact the road has been closed off by police, there’s little to suggest anything is amiss on a quiet street in Quebec’s Saint-Jean-sur-Richelieu.

Situated about 40 kilometres south-east of Montreal and not far from the border with Vermont, the scene is set for a police press conference. Outside an inconspicuous office building, imitation news cameras and news vans blend in with actual film equipment and transport vans, blurring the lines between the stage and the outside world. To most passers-by, it probably looks like an actual press conference is taking place.

It’s late November 2017 and the final stretch of principal photography on The Truth About the Harry Quebert Affair, an ambitious 10-part miniseries being made by MGM Television, Barbary Films and Eagle Pictures, is under way. Based on the acclaimed second novel by Swiss author Joël Dicker, the adaptation is directed by French filmmaker Jean-Jacques Annaud and stars Patrick Dempsey (Grey’s Anatomy), Ben Schnetzer (Snowden), Damon Wayans Jr (Singularity) and Virginia Madsen (Sideways).

The show is set to open France’s inaugural Canneseries TV festival, screening out of competition on April 7, before airing on Epix in the US and TF1 in France. MGM will be selling rights for other territories at MipTV, shortly after the Canneseries premiere.

The murder mystery sees Schnetzer playing Marcus Goldman, a young novelist seeking inspiration for his next book. As he arrives in New Hampshire to stay with his college professor, the titular Harry Quebert (Dempsey), the body of a teenager who disappeared more than three decades ago is discovered, implicating Quebert.

The show marks Annaud’s first foray into directing for TV. Having won an Oscar with his 1976 debut La Victoire en Chantant, he’s best known for helming a string of Hollywood features including 1986’s The Name of the Rose, 1997’s Seven Years in Tibet and 2001’s Enemy at the Gates.

Nevertheless, he has spent recent years contemplating a move to the small screen. “I saw that television was taking the lead in terms of storytelling and more mature material,” he says during a break on set. Having read Dicker’s novel two years ago, Annaud was initially offered it as a film, “but as I was turning the pages, there were so many interesting characters and so many twists in the story that I said, ‘This is the perfect moment for me to say yes to television, for a 10-episode miniseries.’

“There were also other factors: I’ve been used to rather large movies with long setups, and the idea of moving quicker is something that appeals to me.”

Annaud’s idea of “quicker” appears to be an understatement. On set, crew remark that most day’s shoots are remarkably tight and rarely go into the night. “We’re moving fast, therefore we’re moving with energy, keeping in mind that we have to tell the grand story and not worry so much about the little details, reflections in mirrors, things like that,” the director explains. “And I must say I enjoy the process immensely.

“I was not too sure if I was going to direct all 10 episodes, but MGM insisted. And, as a matter of fact, I like being in control. I don’t know how several directors could have adjusted to know the intimacy of each character, the complexity.”

Annaud’s approach to the series has been to shoot it “like a 10-hour movie in segments.” As such, the team are block-shooting on location, rather than filming episodically. “It’s good for the budget, it’s good for the energy and it’s very efficient,” he notes.

In shooting at speed, he is reverting to a technique that he developed nearly four decades ago, while filming Paleolithic period drama Quest for Fire, which won an Oscar for best make-up. While making the 1981 film, “I could not do many shots because the make-up would be ruined, so I was shooting three cameras all the time,” he explains. “But it was three cameras with very different angles, which allows great coverage and also puts the actors in a situation where they know that if it’s good, then take one, without rehearsal, is going to be the take.

“If camera A is not good, it’s usually good on camera B or C. And that gives them great energy on the set, it’s terrific,” he adds. “[Seven Samurai director Akira] Kurosawa used to do that.”

By 10.00, the crew are keen to proceed with the day’s filming, but the weather is proving problematic. It’s supposed to be autumn in New England, so they use leaf blowers and shovels to clear snow from the set. But it is falling as fast as they can remove it. For now, they will have to wait.

In the first of two scenes, Schnetzer arrives at the police station and exits a taxi, walking briskly inside while talking on his phone. The second sees him and Wayans Jr departing the station together, walking and talking as they head to the latter’s police cruiser.

“I kind of play the audience’s role within the series, so my character sees the twists to the story at the same time the audience sees them,” Schnetzer explains. “Because we’ve shot the series as a movie, it hasn’t been shot episodically, it’s almost like shooting a 500-page film. I’ve had to do a lot more work chronologically, figuring out where in the story we are now – that’s definitely been an undertaking.”

Nevertheless, the actor notes that the line between film and TV “has become much more blurred” over the past five years, “particularly with a limited series or a 10-episode miniseries, which is a great medium to adapt a novel because you don’t have to be as ruthless in what you cut.”

With Quebec doubling for New England, today’s shoot takes place in the series’ near-present-day timeline of 2008. More challenging, however, have been Harry Quebert’s 1975 flashbacks, which have required a completely different look, comprising set design, VFX and hair and make-up.

Among those adopting a period look for the series is Tessa Mossey, an emerging actor originally from Canada’s Prince Edward Island. The teenager plays young prom queen and love interest-of-sorts Jenny Quinn in the show’s flashbacks, with Victoria Clark as the present-day version of the character.

“There’s a whole other level of preparation when it comes to entering a different time period,” Mossey offers between takes. “I find, especially with a character like Jenny, that the people who were popular at that time, the music that was popular, all of that plays a such big part of her identity.

“She wants her hair to look like Farrah Fawcett’s, she wants her eyelashes to look like Twiggy’s… she has all of these people she really looks up to and whom influence her identity, which she thinks is so important to how people view her. So the time period is very influential in creating that aesthetic.”

In addition, the series employs considerable hair and make-up to age its characters. In the case of lead actor Dempsey, who is returning to television following 11 seasons on Grey’s Anatomy, this has involved making him look both older and younger for the show’s 30-year time leaps.

“With ageing him down, what we can do is kind of limited,” explains series make-up designer Émilie Gauthier. “It’s pretty much beauty make-up and we’re going to do a little bit of VFX in post.”

Adding extra years to Dempsey has been considerably more work, however. “We understand that he’s about 35 in 1975, so he now has to be about 68,” Gauthier says. That entails about three-and-a-half hours’ worth of make-up each day. “He has one big neck piece, three other pieces on the jaw and near the nose, and then we work by hand around the eyes, with a process we call stippling.”

Beyond the hair and make-up, director of photography Jean-Marie Dreujou – a frequent collaborator with Annaud – has been the one charged with creating instantly identifiable, unique visuals for the series’ time periods. “The main requirement from Jean-Jacques was to set up, visually, the two time periods straight away,” says Dreujou.

“It was most important that the viewer could see immediately what period it was, because the series is complicated as far as the flashbacks – and the flashbacks within the flashbacks – are concerned. It’s essential to know exactly where you are as soon as you see the picture, between 1975 and the other years in the film.”

Both the DoP and the director express their love for shooting in Canada, which they have now done on multiple occasions, and cite the talent and professionalism of Canuck crews in addition to the country’s generous system of tax credits.

After lunch, the temperature on set drops from -4°C (25°F) to -8°C. Schnetzer and Wayans Jr, dressed in light, autumnal jackets, thrust their hands in their pockets between takes, hopping from foot to foot in a bid to stay warm.

At least the brisk pace of filming offers some respite from the biting cold. Annaud “really knows what he wants and he gets what he wants; you just have to be prepared to do one or two takes,” remarks Wayans Jr, who plays the show’s lead investigator, Sgt Gahalowood.

“You’re always on your toes because he’s gonna move quick, he’s moving on,” he adds. “I’ve honestly never been on anything that goes this fast, but it’s a fun exercise, I like it. You don’t really have the chance to ramp up into a scene; you have to make sure that you’re there already, as much as possible.”

Annaud grins in agreement. “They feel the energy, they feel the story,” the director says, preparing for another scene. “Everybody knows they have to be good first take; the focus pullers, the actors… they know that if they don’t know their lines, they’ll look stupid, so it’s internal competition for everyone.”

Our conversation is interrupted as an out-of-breath crewman runs up to inform that it’s time to shoot. “I’m sorry,” the runner interjects, “but before it snows again, we need to get this right now.”

And with that, Annaud’s headphones slip over his ears, cameras slide into position and the director is back behind a monitor for another rapid take.