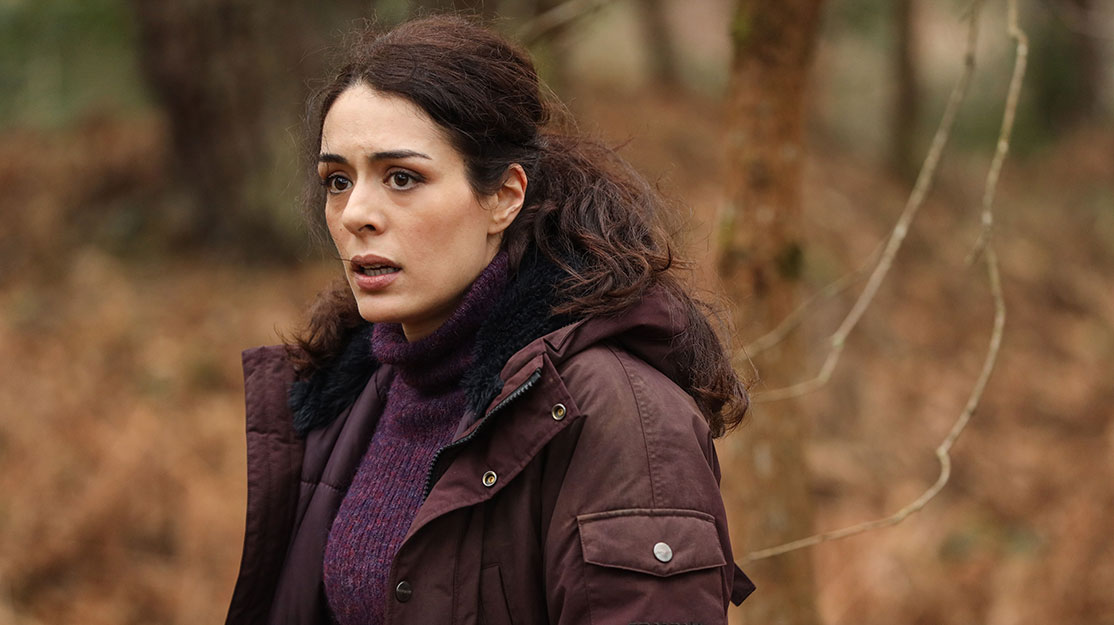 French star Sofia Essaïdi opens up about her roles in La Promesse (The Promise) and upcoming period drama Les Combattantes, and her emotional attachment to the characters she plays.

When it comes to choosing her next role, French star Sofia Essaïdi isn’t afraid of turning down a good script.

The actor has risen to prominence at home and overseas thanks to roles in television series such as Insoupçonnable – the French adaptation of British crime thriller The Fall – and crime drama La Promesse (The Promise). But when it comes to finding the characters she wants to play, “everything for me is about emotions,” she tells DQ.

For the actor, reading a new script is about more than just that feeling you get when you can’t put down a good book, willing yourself to stay awake late in the night to finish a few more pages. It’s also about whether Essaïdi can find something of herself in the character and where she might be able to take them on screen.

“I always give a lot of my personal and intimate life [to a role],” she continues. “That’s what I think actors have to do. I always want to have something of my own story to tell and to give to the character. I always want to give my truth and to do that, I have to give something inside me. If I don’t find what I can give to the character from my life, I don’t do it. Even if it’s big, if it’s very popular. I don’t care about that. It’s hard because I do less things but it’s better because I do better things.”

Morocco-born Essaïdi’s career took off in 2003 when she appeared on Star Academy France, a television singing competition. Early film and TV roles included projects such as Un petit mensonge and Aïcha, before she played medical examiner Leïla Baktiar in 2018’s Insoupçonnable, TF1’s adaptation of The Fall. Starring Emmanuelle Seigner and Melvil Poupard in the roles made famous by Gillian Anderson and Jamie Dornan, it follows a brilliant criminologist (Seigner) who is sent to Lyon to investigate a murder and soon finds herself on the trail of a serial killer (Poupard).

Another role saw her play Alice Haddad in Kepler(s), the France 2 series about a cop struggling to contain his multiple personality disorder. When the body of a student is found in a Calais migrant camp, Kepler (Marc Lavoine) is partnered with young local officer Alice.

But one character the actor says she has particularly connected with is that of Sarah Castaing in La Promesse (The Promise). Debuting on TF1 in January 2021 and later airing in the UK on BBC4, it tells a story split over two timelines 20 years apart. In the past, police captain Pierre Castaing (Olivier Marchal) is left shaken by his failure to convict a man suspected of kidnapping a young girl, while in the present, his daughter Sarah picks up the case when another girl is taken.

“This woman, Sarah, is broken from the inside and cannot lead her life. She’s a ghost, all because of her problems dealing with her father’s death, so through the series she does a lot of things to liberate herself,” Essaïdi explains. “This series was really important for me because I lost my mother just before the show [started filming]. When I saw the beginning of the story and that this woman’s dad had died, I said to myself,this will be hard but it’s going to help me with my grief – and it did.

“That’s what is so crazy about this job. It helped me a lot. I felt so many things, I cried so much. I was dead at the end of that shoot. I stayed three weeks in my bed. After that, I felt something had gone away. I felt better and it’s in this crazy moment when fiction and reality mix. It’s hard but it’s magical because you can look inside yourself and find you have so much to give. It’s not fake. When you have those real emotions, you just have go there and it’s so powerful.”

Written by former Spiral (Engrenages) showrunner Anne Landois, La Promesse was a real page-turner for Essaïdi. “It was like a book you don’t want to end,” she says. “When I read it, I knew it was going to be important for me because of my personal life at that moment. I was ready to do it and give this [performance] to the camera. This role is so important to me for this reason.”

Viewers will next see Essaïdi step into the past for TF1 series Les Combattantes, in which Audrey Fleurot, Julie de Bona, Camille Lou and Essaïdi play four exceptional women pushed to their limits as the First World War rages around them.

Marguerite (Fleurot) is a Parisian prostitute suspected of being a spy; Caroline (Essaïdi) is the wife of car factory owner who went to war and now finds herself as the head of the family business; Agnès (de Bona) is mother superior of a convent requisitioned and transformed into a military hospital, where Suzanne (Lou) is a young nurse.

Essaïdi has always dreamed of appearing in a historical drama and found her opportunity in this eight-part drama produced by Quad TV and directed by Alexandre Laurent (Le Bazar de la Charité).

“I really wanted to experiment with the clothes and I’m so happy we can talk about not just women but women in the First World War. They are so important and they did so many things while the men were fighting,” she says. “It’s thanks to them that the country continued to live. They worked so hard and we don’t talk enough about the women at that time.”

In a familiar vein to some of her other roles, Caroline, she says, is unable to live her life and be herself at the start of the series. Over the course of the story, as she is forced to step up and run the business, she will learn who she really is and embrace her new-found liberation.

“There are a lot of reasons why I wanted to do this TV show – and it’s huge,” the actor says with a nod to the scale of the series. “When you leave your make-up trailer and you see 20 horses, you think, ‘What is happening here?’ It’s not every day you can have this moment as an actress. I loved doing it.”

Essaïdi also loves the variety that being an actor brings, from playing a cop to a bourgeoise woman in the First World War to a narcotics detective in upcoming Prime Video feature film Overdose, which reunites her with her La Promesse co-star Marchal, who is directing.

“He was my dad on The Promise and he said to me, ‘We’re going to work together again.’ Then he called me [about this film] and I was so flattered and so happy because I love him so much,” she says. “He’s so wonderful; the guy is unique.”

Essaïdi prepares for each screen project as if she were part of a theatre production, working for several months on the script and the character before joining rehearsals.

“I love rehearsals,” she says. “There’s something in that moment when you are all together working, thinking, feeling and training. I couldn’t imagine going on to the stage without rehearsing, and it’s the same for shooting. It’s impossible to just learn the scenes and come to set and just do it. What’s the point? But working before and knowing exactly what you are saying and what you want to say, it’s one of the things I’d prefer.”

Yet it’s her enormous dedication to each role that means Essaïdi can take weeks and months off between projects to unwind, before gearing up for her next challenge.

“I see some actors who may do six or seven movies and series a year. How can you do that? It’s impossible for me. I’m so involved that I need time afterwards [to relax],” she says, taking a breath. “I then need time to become the other character.

“In the last year, I did have four great movies and series one after the other, and during one shoot I was working on the next one because I have to do the work beforehand. I did this because the projects were so good, but now I am relaxing. I pushed it too hard and I have to take this moment to recharge and be focused on the next character that is coming. It’s so important for me to do it that way. I prefer to say no if I know I won’t have the time to be totally involved in the character.”

At home in Paris, Essaïdi is also a TV fan – Maid, Succession, The Crown and This Much I Know to be True are among her recent watches – and she enjoyed the opportunity to immerse herself in numerous series as a member of the international panorama jury at French television festival Series Mania earlier this year.

“TV and series are really changing in France,” she says. “Series are too important today to leave them on the side. Of course, France will always be about cinema but today because of platforms like Netflix, there have to be great series. There is much more money than before and a higher level of quality. I always said no before to TV. Movies were better. Now, I’m proud to see that in France TV is growing, because I’m a huge fan of US and UK series.”

While she chooses her next role, Essaïdi is also happy to stay in front of the camera – for now. “I love so much being an actress. There are so many things to do, to experiment, to work on. I’ve been doing this for 20 years now and I don’t want to go to the other side [to direct]. I want to tell a story always by the emotions, not by the image. In 10 years we’ll see. But today, no, I have so many more things to do and learn and feel as an actress.”