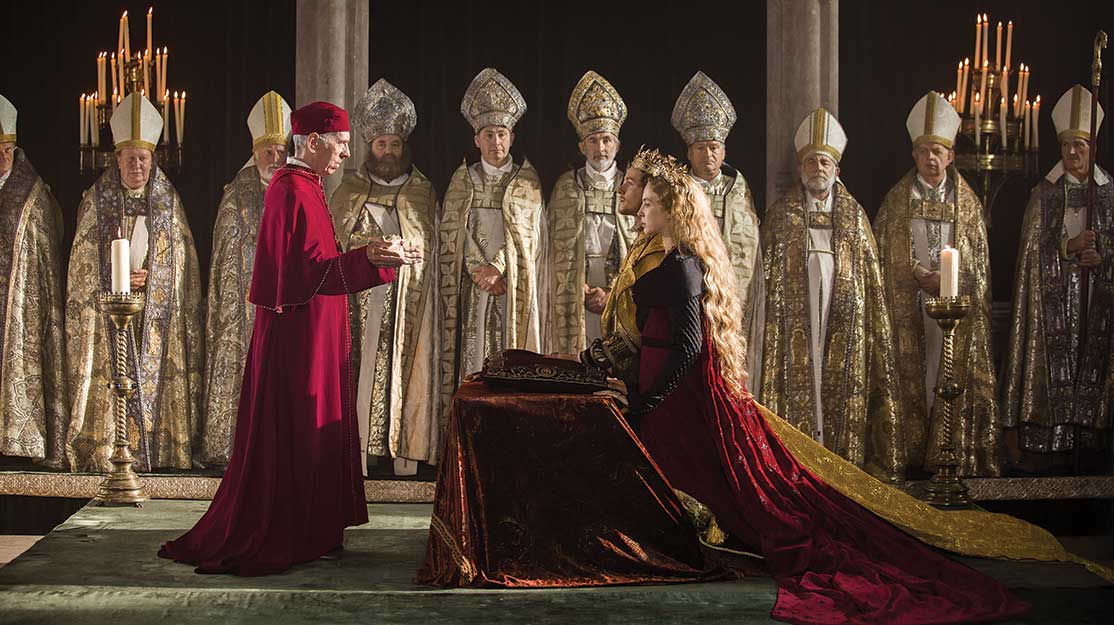 Showrunner Emma Frost takes DQ into the court of The White Princess, a historical drama she describes as a period version of The West Wing.

As far as sequels go, The White Princess is slightly unusual. A follow-up to 2013’s The White Queen, the series again finds its inspiration in Philippa Gregory’s series of novels that comprise The Cousins’ War, set against the backdrop of the War of the Roses in 15th century England.

There are also some of the same characters – but that’s largely where the similarities end. A brand new cast appears on screen, while the BBC dropped out of the US/UK partnership behind The White Queen, leaving US premium cable network Starz to go it alone. There’s also a new production designer and costume designer, giving the series an altogether different style and look.

That proved to be a breath of fresh air for Emma Frost, a British writer who has found her natural calling within the US showrunner system that gives writers the responsibility of producing their own work.

“Doing it under the American system meant I was the showrunner and had the creative control that comes with that,” Frost explains. “I was very proud of The White Queen but there were certain things we felt we could do better so we’ve worked very hard to have a coherent creative vision for The White Princess. It looks quite different, it’s more sophisticated. It has a great deal more psychological depth within the characters than The White Queen, which was much more about the history and the sequence of events. With this one, we’ve gone deeper into character, psychology and motivation. In some ways, it’s like a period version of The West Wing – it’s very political.”

The story sees war-ravaged England ostensibly united by the marriage of Princess Elizabeth of York (Lizzie) and King Henry VII, but their personal and political rift threatens to tear the kingdom apart once again. When rumours circulate that Lizzie’s long-lost brother Prince Richard is alive and planning to take the throne, she is forced into an impossible choice between her new husband and the boy who could be the rightful King.

Frost wrote a detailed series bible and episode outline, laying out her vision for the show. She subsequently penned four episodes and co-wrote a further two, ensuring her vision and voice remained in place across the eight-episode run.

But the development of The White Princess was complicated somewhat by the show’s origins, being based on a book that is itself based on historical events.

“The book is always the guide,” Frost explains. “I go back to history as well and there are certain historical facts Philippa didn’t use that I chose to. For example, the first thing Henry does when he comes to the throne is he backdates his reign [to make him king before his victory over Richard III in the Battle of Bosworth].

“That was considered an absolutely shocking outrage and blasphemy because it was believed that God was on the battlefield and God determined there and then who he would side with and who would be his next anointed king. So to suggest you thought you were the king before God decided was a real insult to God.

“To me, that was an incredibly explosive and dramatically exciting thing that really happened in history so I put that in the show, whereas it’s not in the novel. There aren’t many things I’ve actually invented. The only things I did invent came out of a necessity to follow a character or narrative arc that we set running in the first season. There are a couple of moments but, for the most part, everything is in history or from
the novel.”

Frost describes history as “a litany of things men did,” which means there is subsequently little focus on women. The White Princess, she says, reappropriates history from a female point of view, with a cast of powerful women all fighting for their own survival.

“The stakes could not be higher so it’s a fantastic opportunity to write these vivid, bold characters who are fighting for something they believe in and they need. It’s a joy, I have to say. We got to the final episode and myself and one of the other writers said, ‘Shall we just keep going? Shall we write some more?’”

Leading the charge on screen is Jodie Comer, who stars as Lizzie opposite Jacob Collins-Levy as Henry. She is joined by Michelle Fairley (Lady Margaret Beaufort), and Essie Davis (Dowager Queen Elizabeth Woodville), while Suki Waterhouse appears as Cecily of York.

Comer caught Frost’s attention with star turns in BBC dramas Doctor Foster and Thirteen. And after seeing her during the first day of auditions, Frost quickly told the actor not to take up any other jobs.

“It’s been a really incredible show for me because every cast member is perfect, they are so good together and they inhabit the same world as well,” Frost says. “Sometimes you cherry pick the individuals that you want and when you get them together, they seem to inhabit different realities in terms of the tone of their performance and the way they resonate on screen. We’ve been really lucky with The White Princess in that everybody feels like they’re of the same world and the same tone and they work really well together.”

Filming locations were largely picked close to the production’s base at Bottle Yard Studios in Bristol, taking in sites across south west England such as Gloucester and Wells cathedrals – but also as far away as Arundel Castle on the south coast.

Frost admits each stage of production is “a mountain to climb,” from balancing the scripts between the source novel and history to keeping the drama relevant for modern audiences.

“It’s an incredible juggling act,” she notes. “I was very keen to find out if people of colour existed at this time because you never see any non-white faces in any of the movies or TV shows that have been made so far of this period. I drove my script editing team completely insane, researching any books they could find that might give us an insight into what the reality was.

“We found these two incredible books and learned unexpectedly there were actually quite a lot of people of colour, particularly in the cities – London, Plymouth, Bristol, all of the big port cities – so that was a really exciting discovery when we realised we could actually bring in a much more diverse cast.”

The White Princess, which debuted on Starz earlier this month, completes the story that began in The White Queen. A decision is yet to be made on a third instalment.

But why do historical and period dramas continue to fascinate the world over? “It’s a very glamorous, inaccessible world people can peer into through drama,” adds Frost, who is now working on feature film Zelda with Ron Howard and Jennifer Lawrence. “Royals were the celebrities of their day. Henry and Lizzie are the equivalent of Posh and Becks, aren’t they? They are these glamorous, unattainable, powerful people. It’s glamour and escapism for the audience, but these stories also have incredible stakes.”