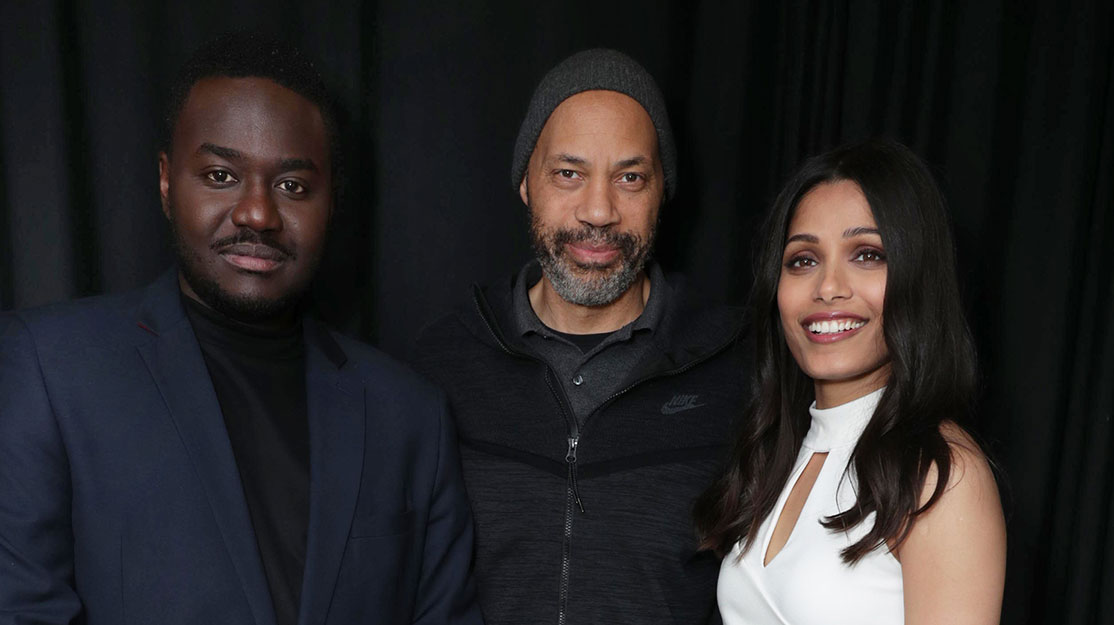 Power to the people

Oscar-winning screenwriter and American Crime creator John Ridley realises a long-held ambition to tell a story about race relations in the UK with Guerrilla, a six-part series for Sky Atlantic and Showtime.

From Oscar-winning feature film 12 Years a Slave to critically acclaimed drama American Crime, race relations in the US are a common theme in the works of screenwriter and director John Ridley.

His latest project, Guerrilla, transports that topic across the Atlantic to 1970s London, one of the most politically explosive periods in British history.

The series tells the story of a couple whose relationship is tested when they liberate a political prisoner and form a radical underground cell. Their ultimate target becomes the Black Power Desk, a true-life, secretive counter-intelligence unit within Special Branch dedicated to crushing all forms of black activism.

The six-part series is produced by Fifty Fathoms and ABC Signature, and distributed by Endemol Shine Distribution. It debuts on Sky Atlantic in the UK on April 13 and Showtime in the US on April 16.

“This is a story and types of characters I’ve been fascinated in since I was a young child,” Ridley (pictured above between stars Freida Pinto and Babou Ceesay) tells DQ. “I was a child of the 1970s and a lot of the iconography of black activism was just so very potent, as well as people like [black activists] Angela Davis and Huey Newton and what they represented both visually and emotionally.

“Then, as you get older, you start to realise consequences of actions and what it means to stand up for a group of people, to stand up against others, and that those individuals themselves were complicated. They were human beings. So over the years growing up, I found those stories very interesting.”

With race and immigration issues front of mind around the world in this age of Trump, Brexit and the refugee crisis, Ridley adds: “It’s unfortunate that a lot of the stories out there for any of us to tell [about race] are both timely and timeless, in that the issues folks were dealing with 10, 15 or, in our case, 40 years ago, people are still dealing with now.”

The story that would ultimately become Guerrilla was first conceived in 2007. But it wasn’t until a trip to London in 2013, when Ridley was in post-production on Jimi Hendrix drama All Is By My Side, that the American filmmaker began to get a sense of the similarities in and differences between racial dynamics in the US and the UK. And after carrying out research and speaking to Brits about their experiences during the 1970s, he found he could tell a story that was firmly rooted in reality.

The accounts offered by the people Ridley spoke to, many of whom joined the show as advisors, were central to shaping the narrative of Guerrilla’s characters. “They lived through this era and their experiences – sometimes in opposition to each other – were instrumental,” Ridley explains. “We wanted to make a show with a certain velocity that makes the audience want to return week in, week out.

“But at the core we wanted to tell a very human story, a story of people who are struggling – against the system, against their own choices, against each other. We could have done a purely dry disposition of London in the 1970s, but I can’t say enough about the individuals who shared their stories and perspectives that ended up being the foundation of everything else we ended up doing.”

As the show’s creator and lead writer, as well as its director for three of the six episodes, Ridley certainly assumes showrunner status on Guerrilla, a role still relatively uncommon in the UK. He says he aspired to bring together elements of the US and UK production systems, including setting up a writers room with British co-writer Misan Sagay (Belle). “We’d sit around talking about ideas and she’d give me a sense of things that really happened in the UK. And sometimes it would just be small language things – like the difference between ‘flat’ and ‘apartment,’” Ridley says of working with Sagay. “She also wrote the fifth episode of our series – I wrote one, two, three, four and six. So it was much smaller than a traditional US writers room, but it definitely worked having someone who’s very talented and knows the UK, as well as someone who knows their history.

“In production, little things are different [between the UK and the US] – hours of the day, how many hours you have to shoot. Some things in the infrastructure are different, like permitting, where you can shoot and how you can shoot. A lot of that was left to our line producer to help figure out. Ultimately, what made Guerrilla work was hopefully taking the best of these two systems and making sure we supported each other in the stories we wanted to tell.”

In terms of scriptwriting, Ridley says he likes to make it clear on the page exactly what’s happening in every scene, meaning the script serves as a blueprint for every department, from hair and makeup to wardrobe and set design. “I want anybody who picks up that script to be able to read it and really understand what is going in a scene,” he says. “You cannot talk enough about every script, every page, every scene, everything that’s happening.”

That also goes for any extras on set: “I really don’t like having a lot of extras. When somebody’s in a scene, I want to know what they are doing and what’s happening with that person. It makes much more sense to have one or two people engaged in a very specific way than having people wandering around in the background.”

As such, Ridley faced a daunting task when it came to filming a protest scene for Guerrilla’s premiere episode involving hundreds of cast members and extras, along with several police horses. However, by working initially with just a handful of actors to plan the action, he was able to piece it together once the cameras were rolling.

“We mapped it out very carefully,” he says of the scene, in which the peaceful demonstration quickly turns violent. “You have 300-and-something people out there, plus horses and crew, so just from a safety standpoint you don’t want to simply turn up and tell people to re-enact a riot – you don’t want anybody to get hurt.

“There are always issues there but you realise that every problem you solve ahead of time, you’re leaving space for issues that come up, no matter what they are. We were able to shoot a fantastic scene full of scale, but also a really emotional scene. On a personal level, you can’t do it without preparation and you can’t do it without a crew that’s fully informed and part of the creative process.”

The protest scene is also notable for featuring one of several instances of police brutality highlighted in the opening episode. On another occasion, a female character is sexually assaulted by an officer. Ridley says that while the production team didn’t want to shy away from such “realities,” they opted to use camera angles and editing techniques to show them in a way that feels more graphic than they actually are.

“Sometimes suggesting things to an audience has more impact than lingering on them,” he notes. “They fill in the gaps of that brutality in a way that depicting them as graphically as possible may not do as well. But that’s part of the joy of putting a show together – when you get into the edit, you can really think about it. I deeply appreciate having the opportunity to do a show that isn’t straightforward. It has allowed for different storytelling than traditional television has allowed for.”

Ridley reserves special praise for Pinto and Ceesay, who he says put in a lot of work to develop their on-screen partnership. “If there is no sense of chemistry between your lead actors, the show’s not going to work,” he says. “That chemistry comes through trust, camaraderie and a sense of leadership through two people who are sharing the screen.

“Freida and Babou put in that work. It goes beyond the writing, the lighting, the wardrobe; it’s about the actors putting in the time so when they arrive on set, they’re good friends, they’re there for each other and they put in a great day’s work for the rest of the crew. Freida and Babou just really had it. It’s great to watch.”

The cast also includes Luther star Idris Elba, who is also an exec producer on Guerrilla through his Green Door Pictures label. “He gives an outstanding performance, one that is very different from the Idris people have seen over the last few years,” Ridley says. “It was a special opportunity to work with him as a partner on the show.”

With season three of American Crime having launched in March this year, Ridley is now developing a Marvel series, though he declines to reveal anything about the top-secret project. But while cinema is currently buoyant on a wave of blockbuster superhero films, Ridley believes there’s still room on the big screen for storytelling-focused dramas such as Lion and Academy Award Best Picture winner Moonlight.

He continues: “When people are making a US$200m bet, you can’t blame them for wanting to take a short bet. But I hope there is still space for filmmaking that’s a little challenging, not traditional and represents people in different ways, and that such films can co-exist [alongside blockbusters].

“I’m just happy, thankful and appreciative television does exist because I don’t know that someone would have made a bet on a film like Guerrilla,” Ridley adds. “I certainly can’t fault the film studios for the choices they make, but I’m thankful there’s another space where we as writers, as storytellers, can tell the stories that are most meaningful to us.”