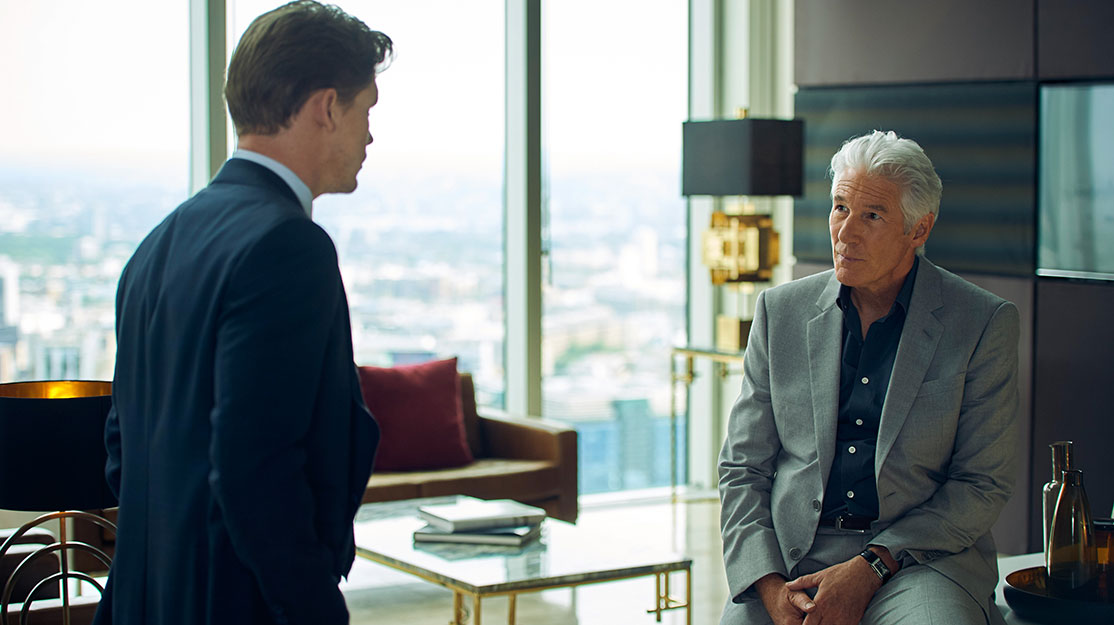 Richard Gere returns to TV for the first time in 30 years to star alongside Helen McCrory and Billy Howle in BBC drama MotherFatherSon. DQ finds out how this story of an international businessman and his newspaper empire goes beyond the boardroom to examine a family in crisis.

MotherFatherSon’s story about an international businessman and his newspaper empire might bring a certain media mogul to mind, but this Richard Gere-starring BBC drama is not quite as it seems.

Written by Tom Rob Smith (The Assassination of Gianni Versace: American Crime Story) and produced and distributed by BBC Studios, the show centres on Gere’s Max, a largely self-made US businessman who acquires a UK newspaper and finds himself connected with the most powerful politicians in the land.

The show beings Gere back to the small screen for the first time in 30 years, but for the Hollywood star, MotherFatherSon doesn’t feel like TV. “To me, this is one eight-hour movie,” he says, speaking prior to the show’s international launch at Mipcom in Cannes last year. “It’s a novel, eight hours of telling a very deep, dense story. The world is so turned upside down in terms of movies right now; TV is where the most interesting stuff is being done for an actor. And there is no stigma with that all.”

Despite the newspaper and political spheres in which it is set, the drama is family-oriented and explores the difficult relationship between Max and his heir and son Caden, who has been estranged from his mother and Max’s former wife, Kathryn (Peaky Blinders’ Helen McCrory), for much of his childhood.

When Caden’s self-destructive lifestyle spirals out of control, the devastating consequences threaten the future of the family, their empire and a country on the brink of change.

“He’s been brought up by his father in his father’s image and we notice very early on that’s not a great fit,” exec producer Hilary Salmon says of Caden. “He’s not really the young man who was built to be the editor of one of the UK’s biggest newspapers, and the cracks are starting to show even before the episodes start.”

For Billy Howle, who plays Caden, the relationship provides a deep seam to explore as the son and his father realise their differences.

“There is a whole process through Caden’s formative years where he’s not just brought up by his father but moulded in his image,” he explains. “Sometimes Caden breaks the mould and that is both a good and bad thing, seemingly. It’s not exactly what Max wants – he wants his son to be able to do what he has done and run his empire and continue to do that. But, at the same time, he doesn’t necessarily listen to Caden’s emotional needs as a father should.

“They are not separate factions because they are tied by blood. But they are at loggerheads in terms of the difference in their outlook and belief systems. In a sense, our belief systems are innate and you can’t force them on another person. You can try, but they tend to bend and eventually break, as Caden does.”

While Max’s character might seem familiar, Smith says viewers will dispense of any preconceptions the minute they start watching the show. “The truth is, as soon as you watch this, that question will disappear. Max is Richard’s Max. It is very much his own creation; he comes from a world that I don’t think is a reference to anyone else.

“His father ran a steel factory, he grew up with the factory workers and had an extraordinary upbringing and then decides to switch to news. I don’t think that’s the same for [any real-life figures].”

Smith came up with the idea for the show after witnessing the impact one of his friend’s health problems had on his family. “The difference is that, with my friend, when the capillaries burst in his head, it upended his family, not the country,” the show’s creator continues. From there, Smith explores all manner of subjects but in a thematic manner, avoiding specific mentions of politicians or countries, for example. The result, he adds, is that the show can explore broad topics such as populism.

Certainly MotherFatherSon taps into real-world issues, and Gere argues that drama’s role is becoming increasingly important as true-life events begin to reflect some of the more outlandish storylines in scripted series. “The reality-show president [Donald Trump] we have highlights the real stuff even more,” Gere explains of drama’s place in the entertainment ecosystem. “When we see something that’s true and honest and heartfelt, we will not become accustomed to something that is false and lies and all artifice.

“So when you do something that is actually coming from an honest place, a generous place, wanting to somehow explain the world as it is and with a motivation of making it better of understanding, it comes out even more. It highlights it more, not as entertainment but as the truth.”

Howle adds: “People turn to drama for the purposes of entertainment and escapism, but it also acts as an exploration and antidote to what is happening.”

However, Gere also admits that producing drama that cuts through reality has become trickier “because you can’t compete with how crazy someone like Trump is and many of these right-wing nationalist tribalisms on the planet.”

While storylines in the real world might continue to astound, MotherFatherSon currently looks set to be limited to just the eight hours ordered by BBC2. Smith says the series, which begins in the UK tonight, has a “great ending,” although Salmon refuses to completely rule out further episodes. “It is probably a miniseries but there is a way of bringing it back,” she says. “It’s up to Tom if he wants to continue the story. We’ll have to see how the audience responds.”