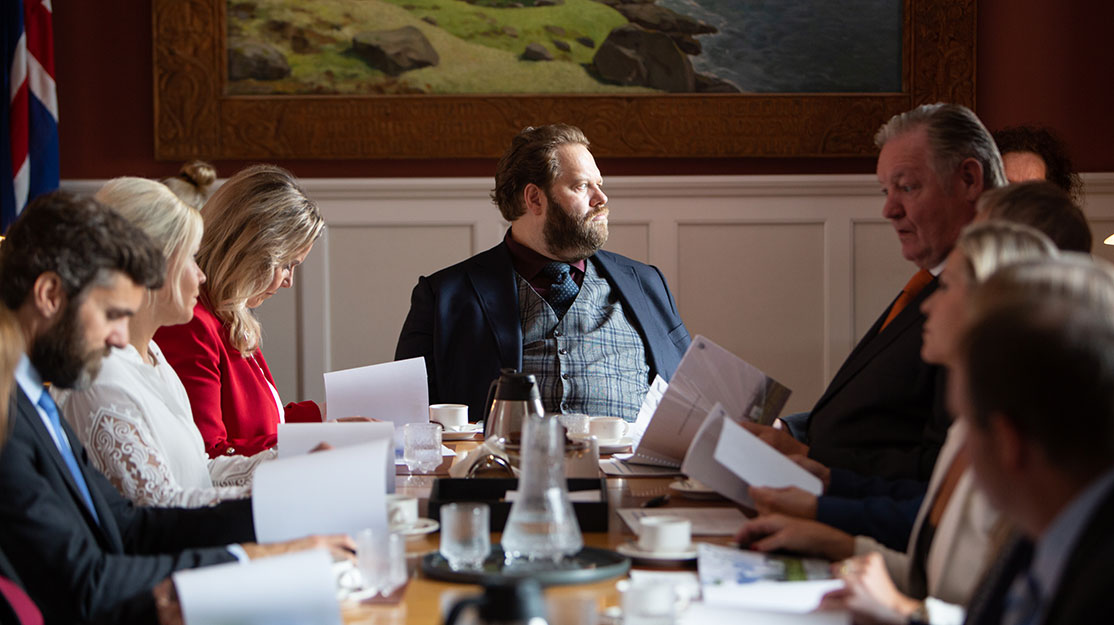 If viewers were delighted by the surprise announcement of a fourth season of Bafta-winning Danish political drama Borgen, their joy was tempered by the fact it isn’t due to be delivered until 2022. Before then, however, another drama is set to throw audiences into the midst of Scandinavian politics, charting one man’s unlikely rise to the role of prime minister.

That journey may be where Icelandic eight-parter The Minister veers away from Borgen, in which Birgitte Nyborg (Sidse Babett Knudsen) must juggle her personal and family life with as much delicacy as coalition politics.

In The Minister, Ólafur Darri Ólafsson (Trapped) plays Benedikt Ríkhardsson, a maverick and an idealist with a unique take on politics who surfs a wave of popular discontent to become chairman of the Independence Party and Iceland’s prime minister.

However, Benedikt has bipolar disorder, a condition that triggers extreme mood swings from depression to mania. As his mental health progressively worsens, his team and their allies are forced to endanger both the stability of the government and their private lives as some choose to hide the illness and others abuse it.

“It’s a great role,” Ólafsson tells DQ. “First of all, there’s the aspect of Benedikt starting his political career. He hasn’t been a part of politics, even though he’s very knowledgable about it. He’s never actually been part of that machine. Another aspect is he’s a man who goes through a manic episode while in a quite powerful position in society, and we see the effects of that both on society as a whole but also his policies and the policies of his party.

“Then there’s the effect it has on his relationship with his wife, and the fact they are going to have their first child. They’ve been trying to have a baby for some time and they haven’t been able to. Those three things combined make it a very interesting role and something I really want to be a part of. Plus it’s well written, I loved the directors and everything was right.”

The Minister, which will debut on Iceland’s RUV in September, has been seven years in the making for writers Birkir Blær Ingólfsson, Björg Magnúsdóttir and Jónas Margeir Ingólfsson, who presented the show at France’s Série Series festival in 2018.

Ingólfsson says the initial idea was to create a political drama about a man suffering from bipolar disorder. “In itself, it is an absolutely horrific condition and something to be taken quite seriously, but we thought it was also such a great embodiment of the Icelandic nation and the national soul, because we keep going up into a manic episode and down into a depression and back up again,” he explains.

“We thought this was something that was really fun to play around with while writing the show, and all these great ideas kept coming to us while we figured it out. Then we felt it was a universal theme as well and it was a good story with a brilliant character that Darri portrays wonderfully.

“We started writing this in 2013, so we’ve put a lot of work into it. What we were dealing with initially in the writers room was this character; this humble, sincere, serene man going into a manic episode while trying to face all of these really fundamental issues in politics, both domestically and internationally.

“While he’s trying to think outside the box, the legal and political system is constantly trying to put constraints on him. That was a great conflict to work with and to have as the main thread throughout the series. It was seven years of that. It was a lot of fun, and now we’re very happy it’s been brought to the screen.”

Magnúsdóttir says she was intrigued by the challenge of brining Benedikt to the screen, as well as seeing the political landscape in Iceland from his unique perspective.

“I had known of the script for a long time so I was very honoured when I was asked to be one of the directors,” she says. “It’s a huge production for Iceland, so that was also exciting and challenging. I thought I would have something to say in this team and it worked out well, both with the actors and the scriptwriters.”

Magnúsdóttir’s preparation involved lots of discussions with the writers and Ólafsson about how they might present Benedikt on camera, with an ambition to externalise what is going on in his mind. “How do you show a bipolar man? You can show it by acting, but you cannot just show it by acting. It’s visual also, so we did everything to help him [on set] and in the editing room with the music composer in post-production,” she says.

At the beginning, it’s not clear Benedikt is suffering from any health problems, coming across as an idealistic outsider who threatens to shake up the political establishment. His promises lead to an improbable election win that installs him as Iceland’s prime minister. But once he is in office, the series charts the gradual escalation of a manic episode.

“We see it though his ideas, which become more irresponsible. His decisions are more rash and taken on a whim as the series progresses, so we use that as a tool to see how his mania is escalating,” Ingólfsson says. “There are also beautiful tricks done by the directors and the actors to portray that beautifully.”

Ólafsson notes of his character: “He is different and unconventional. No one close to him really knows he has the potential to become so sick, so it’s a huge surprise to everyone around him, including himself in some ways. He is hard to figure out in the beginning and, with his mania, he becomes paranoid, feels he is better than others and more daring than others and that people are holding him back.

“There are political leaders working today I am not convinced are fully sane but they have a lot of power. I can imagine being part of the establishment and having to work with someone who does not respect the rules or is a loose cannon. It could be very difficult but also very dangerous. In many ways, we explore that in the show.”

Playing a charismatic politician who walks the fine line between madness and brilliance was made doubly challenging for the actor by the fact that the eight episodes were not filmed linearly, meaning he had to bounce back and forth between Benedikt’s various states of mind.

“We had to shoot all eight in sync, at the same time. We tried to push as much as we could from the second half [of the season] later in the schedule, but that wasn’t always possible. You have to work really closely with your directors and your script supervisor. It was really challenging, but it was a lot of fun. Good work has to challenge you, but there also has to be enjoyment. I loved it. I hope I do it justice.”

The actor was particularly mindful of avoiding stereotypes of mental illness, and bipolar disorder in particular. “It’s such an easy thing to do badly,” he says. “We really wanted to be respectful and not act according to stigmas or prejudices but, at the same time, we wanted to explore what happens when people start getting ill with it. I also love the love story between him and his wife and their family life, which is beautiful.”

The Minister marks the first project for the trio of writers, who have spent years plotting and crafting the story. “Benedikt as a character is very idealistic and he is trying to save politics from itself. But the underlying conflict in the story is that politicians don’t want to be saved by an idealist,” says Ingólfsson.

“It was a question of how you portray that through someone who is gradually escalating into mania. You have to show that with respect because it is a life-threatening illness people all over the world suffer from, but you still have to make it entertaining in the incredibly harsh setting of politics. That was the challenging part of writing the script.”

Meanwhile, the directors were tasked with ensuring Benedikt was portrayed with an even hand, showing the good and bad sides of the newly installed political leader to ensure he is not too “holy.”

“We can’t just tell a story of this illness and how this man is victimised by it,” Magnúsdóttir says. “We have to be truthful to it – it affects many people around him because he acts like a healthy person wouldn’t do.”

Magnúsdóttir’s previous project saw her write, star in, produce and direct Pabbahelgar (Happily Never After), in which she plays a marriage counsellor whose life is turned upside down when she discovers her husband’s affair. This show, coupled with The Minister, gives Ólafsson the view that Icelandic drama is now branching out from crime dramas such as Trapped, The Valhalla Murders and Case, much in the way its Scandi neighbours have steered away from Nordic noir in recent years.

“We’re seeing all kinds of different material we haven’t usually seen coming from Iceland, and that makes me happy,” Ólafsson admits. “It’s great we have our crime series. Trapped is something I’m really proud of but it’s also a lot of fun doing something like this, about a prime minister who has bipolar disorder and about women reevaluating their lives when they are halfway through [in Happily Never After], and so on. There are a lot of series now in development in Iceland that are really interesting. We’re going to see a lot more diversity coming out of Iceland.

And when viewers watch The Minister, how should they feel about Benedikt? Ólafsson wants people to be conflicted by the character and his actions, but also to come away with a greater understanding of bipolar disorder. “People will feel sympathy not only for him but also for the people around him. That’s what I would like people to take away from it,” he says.

Ingólfsson concludes: “In politics, we invest in people by voting for them. They become our leaders and our politicians, and very often they turn out to be something different from what we expected. I suppose the viewers will have the same experience with Benedikt. You are immensely invested in him, he’s almost holy at the beginning, but then he turns out to be something other than you expected. That’s the feeling I would like the audience to experience: ‘I can’t believe I supported this guy.’”