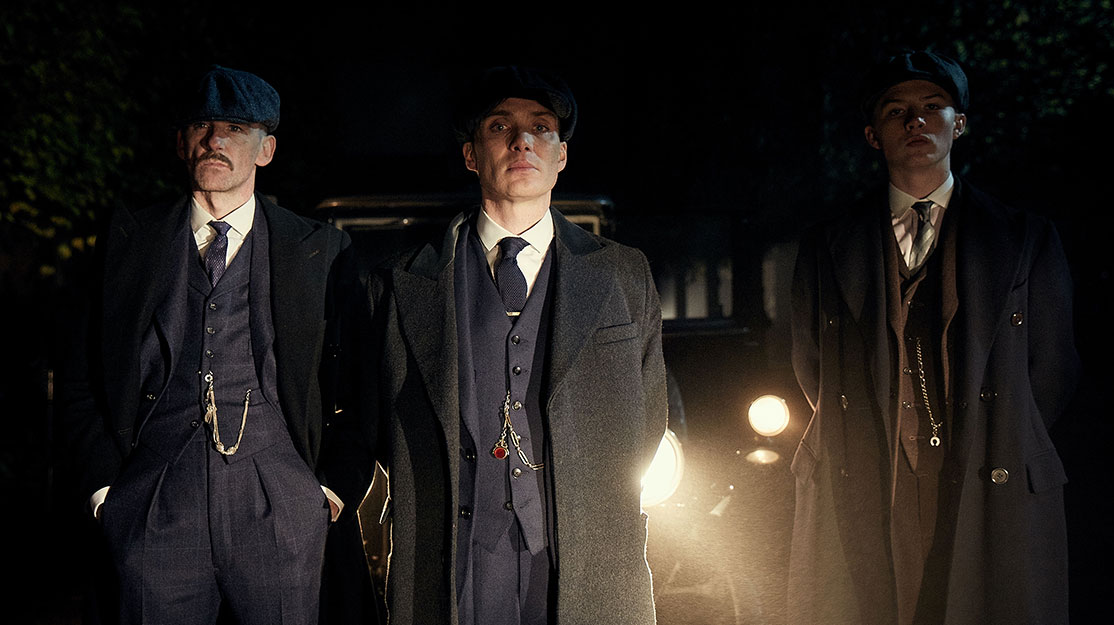 Somewhere, perhaps in an office or filed away on a computer, are the first four chapters of a novel called Peaky Blinders.

An epic gangster story set in 1920s Birmingham, the story had been a longtime passion project for writer Steven Knight.

Then when Nurse Jackie creator Caryn Mandabach asked him if there was anything he wanted to do for television, he returned to Peaky Blinders – which takes its name from the gang members who would sew razor blades into the peaks of their flat caps.

Knight recalls: “In 1992 I was going to do it as a novel. When I first started writing, this was one of the things I wanted to do. I did write four chapters as a novel – I wonder where it is now. But I went away and did film and Caryn got in touch and said, ‘Have you got any ideas?’ and this was one of them.

“Then we went to the BBC, they liked the idea and that was it. It’s a story of a family so you could do it in any way. I knew the basics (of the gang, led by the Shelby brothers), which were that the older brother wasn’t in charge, the younger one was, their parents are dead and they’ve just come back from the war. Before, they’d been pretty rough and ready, and now this younger brother (runs the criminal enterprise) with class and does it differently. That was the idea.”

Peaky Blinders burst onto BBC2 in 2013 and now, after a two-year break, the series is returning to screens for a third season, which sees gang leader Tommy Shelby (Cillian Murphy) pulled into the glamorous and dangerous world of international intrigue in 1920s Birmingham, putting his entire organisation and family at risk and forcing him to question everything about his own ambitions and desires.

Knight explains: “They’re richer but not necessarily happier. The tensions in the family are growing but the question of the whole series is whether people from this (working class) background can escape. Can they become respectable? Can they ever get away? What I want to do is dramatise the things that pull them back and keep them who they are. It questions whether it’s because of who they are that they remain like that or if it’s because of circumstance. That’s really the fundamental question – can the Shelbys ever become respectable?”

Executive producer Caryn Mandabach adds: “This is emotionally ambitious – it’s a saga – so your ambition is to move hearts and minds, and to do that, you use every trick in the book to understand how people access feeling. There are lots of contexts – we all have family, we have relationships – but to dig deep into those phenomena is at the core of the ambition. As Steve says, you can run but you can’t hide.”

On screen, the show reunites returning cast members such as Helen McCrory, Tom Hardy, Paul Anderson, Sophie Rundle, Joe Cole and Finn Cole. And they will be joined by Paddy Considine, who plays this season’s villain and is described by Knight as “a force beyond anything Shelby has previously encountered.”

“They’re so, so smart,” Mandabach says of the cast. “And it’s not just emotional intelligence. They’re great to have a beer with and that’s because they’re curious and they take a lot of things in. Some actors, not so much. These actors, as a group, are the smartest bunch of folks I know. Clever on every level, well read and curious. They love being there because they’re with other people just like that and it’s fun.”

For many series, reaching season three is a landmark moment. Having established your characters and setting in season one and navigated the televisual equivalent of the difficult second album, a third run is a chance to push both the creative and production boundaries.

For Knight, reaching this stage just makes his job much easier. “The first season was setting the whole thing up and you really had to point out that this is mythology, that it’s larger than life,” he explains. “We’re not trying to do kitchen sink, it wasn’t ‘isn’t life awful.’ It’s the opposite of that. We want glamour and gangsters and westerns. Now everyone gets that and it makes it so much easier.

“It’s a fantastic time because you know the actors are great, you know they can do it. There are things you can do and they can pull it off. In other words, you can say that here in 1924 (the setting for season three), my characters are now here. I know how they’re going to behave so I can just watch them, effectively. This is what they’re saying, this is what they’re doing, getting themselves into the same old trouble, making the same mistakes over and over again. That’s the beauty of it. But the challenge is to throw different fireworks at their feet.”

But while he is enjoying working in TV with Peaky and forthcoming Tom Hardy drama Taboo, which will air on BBC1 and FX, Knight still considers the big screen to be his nine-to-five.

“I still consider film to be the day job,” he says. “And I consider Peaky to be what I do when I’m happy and relaxed. For me, I want to get to Peaky. The features – it’s such a different thing now where you write a script and a director takes it and that’s it, that’s fine. I’ll also be writing and directing a feature. Features are great but TV’s something different.”

He goes on to describe a TV set as “heaven” compared with being on a film lot: “It’s like taking your tie off, taking your boots off. It’s great, it’s lovely. You don’t have the studio’s notes, you don’t have the director’s notes. You don’t get all that and it’s all lovely. And that’s why I think television is thriving. Because people who make up and tell the story have the authority, rather than someone who feels intimidated by being given the story and feels as though they have to prove it’s theirs.”

Peaky Blinders is now on air in 163 countries around the world following deals by Endemol Shine International, while Netflix also carries the show internationally.

And like many film stars, Murphy has crossed over to television and admits “it’s a real gift for any actor to be given a part like this and be able to explore a character over 18 hours.”

In the role of Tommy, Murphy is rarely seen without a cigarette in hand, something that has become the character’s crutch and means the actor has smoked thousands of times during filming.

“People smoked all day and night (in the 1920s), that was their thing, and it just became a Tommy thing,” he says. “I don’t smoke myself but they’re these herbal roll-ups. I asked the prop guys to do a rough count of how many I smoked and they think it’s something like 3,000 in four months.”

Off set, Murphy has been enjoying his new role as an executive producer – the first time he has performed such duties. While he had been involved in discussing the show, the story and tone from the beginning, the EP credit formalises his position.

“It’s very collaborative,” he says of Peaky Blinders, which is produced by Caryn Mandabach Productions and Tiger Aspect and boasts a contemporary soundtrack featuring Radiohead and Nick Cave. “It’s my first barbecue as an executive producer. It’s interesting trying to look at stuff dispassionately and objectively, whereas normally you watch yourself through your hands. So learning to try to watch stuff and look for the overall structure and story is very interesting for me. I’ve really enjoyed the process.”

Murphy avoided watching himself back while on set, however, hoping to avoid colouring his performance. “It all happens afterwards, it’s all in the post-production,” he adds. “I just come in and have a look at things and just add ideas. I would hate to colour the performance because it’s only in the post-production that you ever pipe up with thoughts. I’ve never looked at rushes or playback or anything during shooting. That’s not the way I would do things and I don’t think it’s a helpful addition to an actor’s arsenal to start looking at yourself during shooting.”