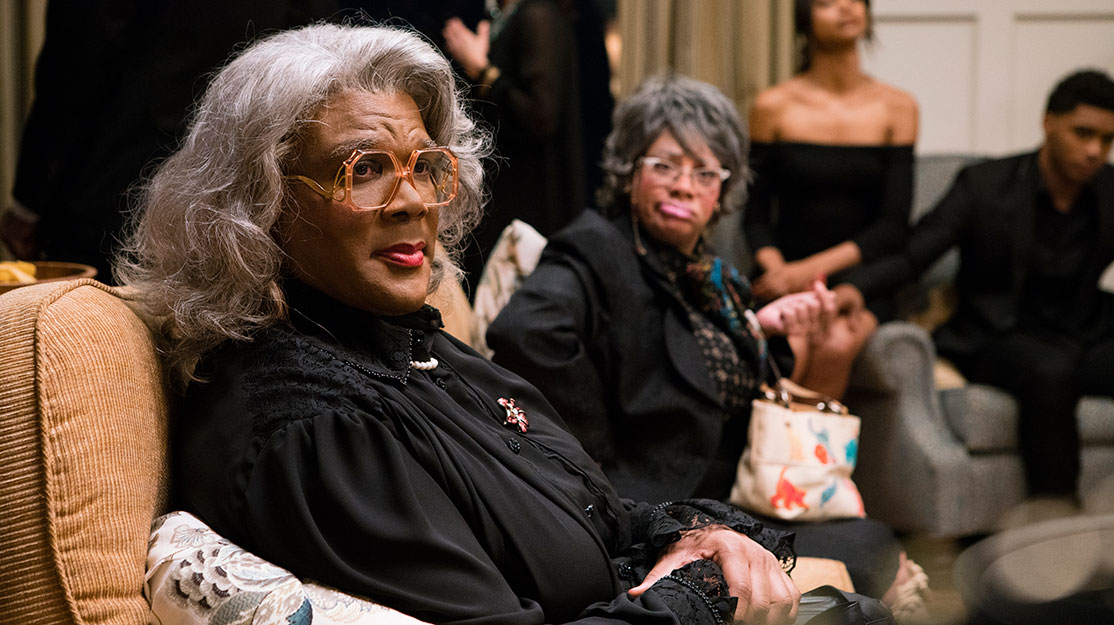 Writer, director, producer and actor Tyler Perry talks about breaking into the TV industry, how he prepared to restart filming amid the pandemic and television’s power to change the world.

To describe Tyler Perry as anything other than prolific would be an understatement. Since 1998, the award-winning writer, director, actor and producer has been responsible for 1,275 episodes of television, 22 feature films and 20 plays – writing all of them and directing most of them.

His TV dramas include dramas Sistas, The Oval, The Haves & The Have Nots and Ruthless, alongside comedies Bruh, House of Payne and Assisted Living. In film, meanwhile, Perry has been behind such titles as Diary of a Mad Black Woman, which was based on his play of the same name and introduced the character of Madea (pictured above), a grandmother played by Perry who has gone on to star in numerous films of her own.

Speaking during a keynote on the first day of Mipcom Online+ this week, Perry discussed his rise in the media industry, how he returned to filming amid the Covid-19 pandemic and the power of TV to change the world in the wake of the George Floyd killing and the Black Lives Matters movement.

Perry says his mother was his inspiration after a difficult childhood…
My mother, who passed in 2009, is still my North Star when I think about compassion, when I think about giving, when I think about love. She was just a wonderfully impressive woman.
Growing up in a household where there was tremendous sadness and abuse – she was abused by her husband, and me by my father – having to endure all of that was a very tough upbringing. But had it not been for her love, her kindness, her taking me to church and her keeping me in faith and constantly showing me hope, I don’t know where I would be. Every time I think about her, I smile with just how much hope and resilience she had in life.

But he found an escape route through television…
People ask me how I write so much content. It’s because in trauma, I developed this place to go in my brain to escape to these different worlds. Inside these worlds, I could actually stay there for hours, which is how I write now. I can still tap into that place in my brain that creates these worlds.
Growing up as a kid, it was certainly television that helped create a lot of those worlds for me. One of my favourite shows is Gilligan’s Island. I loved this show on so many levels. I remember being a kid, thinking there were little people that actually lived inside the television.

It was Oprah Winfrey who inspired him to start writing…
I wrote my first play after watching Oprah, when she said it was cathartic to write things down. I started journalling when I was about 18 or 19 years old. I didn’t start writing young but my imagination was created then to create these worlds.

It was “beyond difficult” to get his first play onto the stage…
That’s what I tell everybody who has a dream: don’t let anything deter you. Trying to get my first show up, I put it up on stage and [almost] nobody showed up. But out of the 30 people there, there was somebody who wanted to invest [in it]. So for about seven or eight years, it became a flop over and over again in every city. Then in 1998, it hit. It changed everything. The audience showed up and that was one of the defining moments in my career.
From 1998 until 2004, I was doing about 360 to 380 performances a year of the live shows. There was no break and no time. These shows were sold out everywhere, from LA to Chicago to New York. I wanted to figure out how to continue to feed this need of these people, my people, this audience who were so hungry for content and hungry to see themselves and wanting to laugh. So I thought, ‘OK, I’ll try a film. That way I don’t have to be in all the theatres.’ And from there I went into television.

Perry sees television as an opportunity to invest in characters and relationships over a long period of time…
From the first show I did, which was House of Payne, I got to know the characters and they got to live very long lives. That show is now approaching 200 episodes. These characters have long lives and existences. They ran parallel for 14 years with people’s actual lives of raising children. To see this extended family and blended family live and now their children are having children – that’s what I love about episodic television. The characters get to live; they have a much broader and longer arc and you really get to know them.

Being an actor has helped to inform his writing and directing…
The acting definitely helps me in directing actors because I understand what they deal with, how they deal with it and what they need to get to certain areas and certain scenes. The acting definitely informs the director. Every director should take an acting class or two just to understand what an actor goes through. Editing also helped me to understand that. Spending hours and hours in edit rooms has allowed me to cut down hours and hours in my day of shooting.

Now he owns Tyler Perry Studios in Atlanta, a journey that began when he understood the value of owning property…
My father built houses when I was a kid. The guy he worked for would give him $800 for his work and he would be so happy to get it. But I watched the guy sell the house for $80,000. I always wanted to be the guy who owned the house. Ownership was key and important to me. During the first years of production, I realised how much money I was wasting in renting so, very early on, I started buying everything. Pretty soon I had a huge amount of everything you needed to make television and films except the building. So then I bought a studio.
My first studio was this little box, maybe 4,000 to 5,000 square feet. I thought I had everything I needed and it was all going to work. Then the first time the cast and crew showed up, I realised I didn’t have enough space. From there, I borrowed another studio and then ended up in the one that I’m in now, which was once a Confederate army base.
This very land was where Confederate soldiers plotted and planned how to keep black people enslaved, and now I own it. There are still streets here that are named after Confederate generals and soldiers that are being taken down as I’ve erected monuments to black people like Denzel Washington, Oprah Winfrey, Cicely Tyson and Whoopi Goldberg. Their names are on sound stages on the same land. It just speaks to a lot of the hope of what this country has become and can continue to be if people would just open the doors and push forward.

Owning his own studio, with living quarters for cast and crew, allowed Perry to be among the first producers in the US to get back into production following the Covid-19 shutdown…
Eighty-two episodes of my four series are all in the can for 2021. I employed this model of bringing everybody together and sequestering them here on the property for two weeks at a time and with rigorous testing every three days, but also wearing masks and face shields.
To have a crew member who was on another movie at the top of the pandemic’s beginning in America die was very sobering to all of us who had worked with him and spent time with him. So I knew I had to do everything I could and go above and beyond to make sure the cast and crew were safe, especially because black and brown people are the ones who are dying most from the disease.
I could go and just be on an island until this thing passes, but what would happen to the hundreds of people who work for me? To be able to take those people and find a way to get us all through safely, because I was living right there beside them day in, day out, it’s a wonderful thing.
Our evenings were really good. We had we had four food trucks, we had an open-bar truck that opened every night after we wrapped and we had movies out on the lawn. We had yoga and workouts and classes. It was really fun, so much so that all the cast were asking, ‘Can we come back next year?’ I’m like, ‘If there’s a vaccine, it’s over. This is over.’ So we’ll see what happens.

After the killing of George Floyd earlier this year and with the Black Lives Matter movement having spread around the world, Perry looks to the past to see how the power of television can change the world…
What made the civil rights movement so powerful were the images from television. That is television at its best, when you can take that image and show it to the world and effect change. That is exactly what happened with George Floyd’s horrific murder. The very visual of watching it played out in real time spoke to every human being on this planet who had a heart, who said, ‘Listen, this is not right.’ That is the power of this business. That is the power of an actor, of a writer, of a news anchor. That is the power of television. When it’s used in the right way and for the right thing, it can change the world.
I have to hold on to our history of this country. I have to hold on to the fact that we came here in slave ships, that we were enslaved. I have to hold on to the fact there were coloured and white water fountains, these injustices that we have gotten past. As I look to the future of all the things we still have to fight our way through, I look at how much heavy lifting has already been done. If I ignored the history, the future would look very dim. But I know there have been changes.