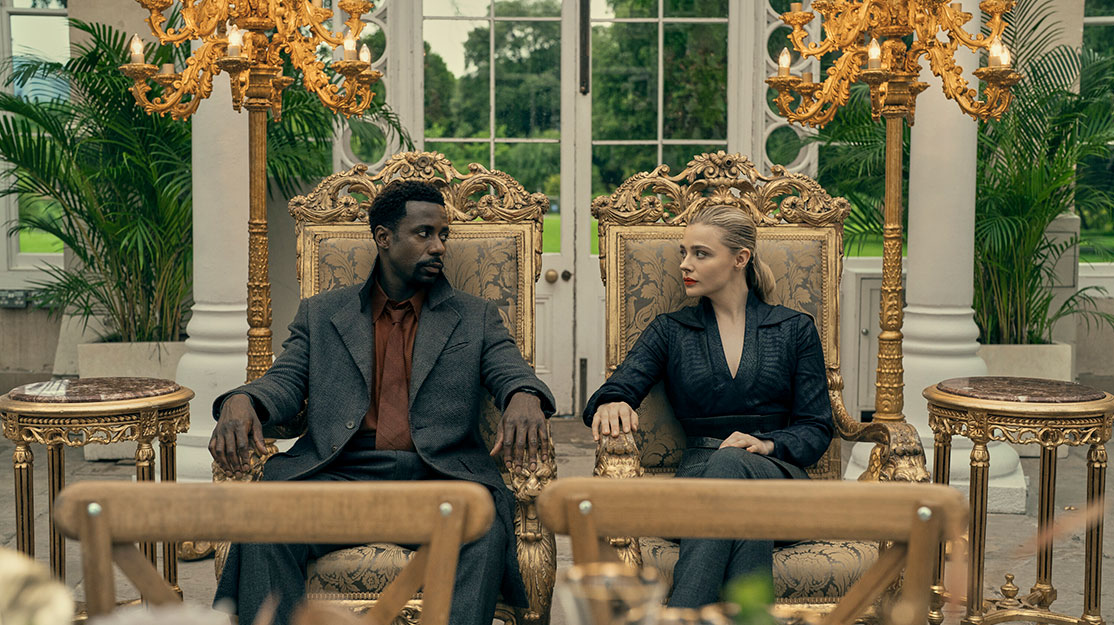 Westworld creators Jonathan Nolan and Lisa Joy dive back into a futuristic, science-fiction setting for Prime Video’s The Peripheral. DQ speaks to Joy, director Vincenzo Natali and the cast about bringing William Gibson’s novel to television.

Across four seasons of Westworld, creators Jonathan Nolan and Lisa Joy have taken viewers on a complex, mind-bending journey into a dystopian future. And for their next project, they’ve done it again.

Prime Video series The Peripheral opens in 2032 in a rural town in the Blue Ridge Mountains, where siblings Burton and Flynne make money playing simulation games (Sims) to support their mother’s rocketing medical bills. But when they get the chance to test a new virtual reality Sim, Flynne is transported to 2099 London, and the game she’s playing is more realistic than she could have imagined.

Another deep dive into a futuristic world and a labyrinthine mystery proved too enticing to turn down for Nolan and Joy, who were in the middle of filming Westworld when director Vincenzo Natali (Cube) brought them William Gibson’s book The Peripheral, on which the series is based.

“I don’t think Jonah and I look for projects so much as when we find something that we love, we can’t help but seize it and stalk it to the end of the earth. It just so happened that this fell into our laps,” Joy tells DQ.

Natali was working on an episode of Westworld when he took Gibson’s novel to Joy. She read it in one night and declared she was on board the next morning. “Every project is just about do you connect with the characters, their emotions, their journeys, and are you interested in the world? For me, that was a strong yes on both counts,” she says.

In 2032, Flynne (Chloe Grace Moretz) and her Marine veteran brother Burton (Jack Reynor) share Burton’s Sim avatar, “jockeying” for high-paying customers to beat challenging game levels. Then when Burton is offered a chance to beta test a new Sim, Flynne ends up playing, pretending to be her brother.

She is taken to Future London and tasked with breaking into a corporation known as the Research Institute to steal a valuable secret. When the assignment goes badly wrong, she begins to realise the game is real and the information she’s stolen has made her and her family the target of forces sent from the future to reclaim it. A phone call from Wilf (Gary Carr), who lives in Future London, may just be the start of unravelling the mystery at hand.

Wilf and a mysterious character called Aelita serve as Flynne’s introduction into Future London, while Carr says Wilf’s mission through the series is to find Aelita after what the actor teases as a “significant event.”

“He’s a fixer,” Carr (Trigonometry) says of Wilf. “He liaises with society’s elite and he’s connected to a character called Lev Zubov, who we meet in the series. Wilf’s whole thing is essentially just to find Aelita, because they are deeply connected in some way.”

Charlotte Riley (Close to the Enemy) plays Aelita. “It’s clear from the beginning she’s a disruptor, on the inside trying to shake things up, and she’s going about it by quite strange means,” she says. “Wilf is challenged with finding her because they’ve got some deep connection from their past. They’ve been through an event that is referred to in the first couple of episodes that they both experienced. Then Aelita essentially goes into hiding after causing a huge number of issues for everybody.”

The ensemble cast also features T’Nia Miller (Years & Years) as Cherise Nuland, the “Queen Bee” of Future London society who is behind the effort to trace Flynne in the past. The Peripheral, she says, “is just a magical journey that is full of surprises. It’s so multi-layered, and I would say the same about Cherise. She is a bad boss bitch but she’s charismatic, she’s completely determined and she has agency. It’s just a delight to be a part of this project. It’s a real gift as an actor.”

If Nolan and Joy come knocking, Riley and Carr aren’t ones for turning them down. Similarly, JJ Feild, whose character works with Wilf to find Aelita, and Julian Moore-Cook (Lev’s employee Ossian) didn’t need their arms twisting to join the show once they knew the Westworld creators were behind an adaptation of a Gibson novel with Moretz (Let Me In) in the lead.

Feild (Lost in Space) says the project was particularly unusual in that all eight scripts were available ahead of shooting. “The worst thing that has happened with big-scale, secretive productions is the actors just get their scenes and it’s disgustingly disrespectful to the process of storytelling,” he says. “There are many shows on telly right now where actors don’t even know what part they’re playing when they turn up. They don’t know where their character is going to go, so you don’t know what you’re doing in this scene because you don’t know what’s going to happen in the next one.

“We see these awful reviews of terrible acting,” he continues, “and I can tell you that it’s not the actor’s fault. It’s because they weren’t given scripts, whereas [on The Peripheral] we got them all. It made me want to weep with gratitude that they did that.”

Produced by Amazon Studios and Warner Bros Television, in association with Kilter Films, The Peripheral was created by showrunner Scott B Smith (A Simple Plan). Natali, who is friends with Gibson, admits the author’s work isn’t easily translated and praises Smith for finding “the code” to successfully bringing the novel to TV.

Gibson’s book was always in the director’s back pocket as he shot the series alongside fellow director Alrick Riley on location in London and North Carolina.

“More than anything, from a directorial point of view, I wanted to translate the feeling that I get when I enter his world onto the screen, because it’s a very particular kind of patina that I don’t think I’ve encountered anywhere else,” Natali says. “I’ve certainly never seen it in a movie or a television show. It was essential to all of us that the presence of William Gibson was felt on a daily basis.”

Riley “grilled” the writers about the science behind the show so that she could understand it as much as possible and ensure it was presented as authentically as possible in the series. Carr had already read the novel, and says Gibson is unapologetic about dropping readers into the middle of a strange world without explaining the rules from the outset.

“The most confusing thing for me was having different drafts of scripts,” he says. “Once you read one draft and keep it in your head, then you come to shoot something and get another draft – I start losing my way then. But the science I get.”

“The scripts are so great because you just hook into what the characters are trying to do to each other or get from each other or do for each other,” notes Moore-Cook (Benidorm). “And then the setting is almost like this beautiful background world that it happens in, so it’s really easy to focus on what people want or what they’re trying to achieve.”

The show’s two worlds couldn’t be more different as the action passes back and forth between rural North Carolina and a futuristic London, where recognisable landmarks such as the London Eye and Nelson’s Column are dwarfed by numerous Greek-inspired statues. Mannequin-like guards, waiters and chauffeurs are ever present, while car number plates look like QR codes.

Production designer Jan Roelfs, costume designer Michele Clapton and set decorator Kathryn Pyle were all instrumental in creating the look of The Peripheral, while Joy, Natali and the cast revelled in the extent to which green screens and VFX were shunned in favour of built sets.

“That was a dream,” says Field. “It was very easy to get lost in those sets because there wasn’t a world of CGI or projection rooms. No expense was spared, so you could just go in and play.”

Riley reveals the biggest challenge on set was working through Covid, with schedules at the mercy of cast and crew falling ill or coming into contact with someone who was. Masks were used during rehearsals, and they were only allowed to be removed once the cameras were rolling.

“In Future London, 80% of the world’s population has died, so to be in central London or Trafalgar Square with nobody there in the middle of the day just added that layer to the whole piece, which made it even more believable and eerie for us,” says Carr.

“It was eerie, but it was also so realistic,” Riley adds. “The first time I ventured out into central London [after lockdown], it was like that. It was just empty and dead and every soul had left, and you realise the people are the soul of London. [Filming The Peripheral] was spookily familiar.”

Having worked on both Westworld and The Peripheral, Natali believes the shows do share some of the same DNA, which goes beyond the involvement of him, Nolan, Joy and fellow exec producer Athena Wickham. Westworld actor Louis Herthum is also part of a cast that further includes Katie Leung, Chris Coy, Alexandra Billings, Poppy Corby-Tuech, Eli Goree, Amber Rose Revah and Anjli Mohindra.

Another link between the two dramas is the mixture of rural and urban landscapes, which the director says shows that nature and technology are not mutually exclusive.

“I was cognisant of Jonah and Lisa’s approach to science-fictional creation in television, in that they’re really obsessed with creating a tangible reality,” Natali says. “There’s a version of this story where everything is done against a green screen in a studio situation, but the overarching approach they have – that I wholeheartedly agree with – is to shoot on location in real spaces as much as you can and bring as much of reality into your fiction as possible, to make it as tangible and real to the audience as you possibly can.

Though science-fiction series have become more sophisticated as they have gained access to bigger budgets and technological advancements in recent years, Joy says the genre – and The Peripheral – has never had to rely on those resources to tell an ambitious story set in an otherworldly setting.

In fact, “every work is defined as much by your limitations as by your possibilities,” says the self-confessed Battlestar Galactica fan. “Sometimes the limitations in a project, whether it’s budget or technology, allow for really interesting creative innovations. Visual effects are getting ever better, but there’s still something beautiful to me about seeing real sunlight and shooting real London.

“The landscape of ambition will continue to be vast. All creatives and all humans tend to be as ambitious as possible. But I don’t always hate the limitations. I sometimes think there’s a lot of beauty in that.”