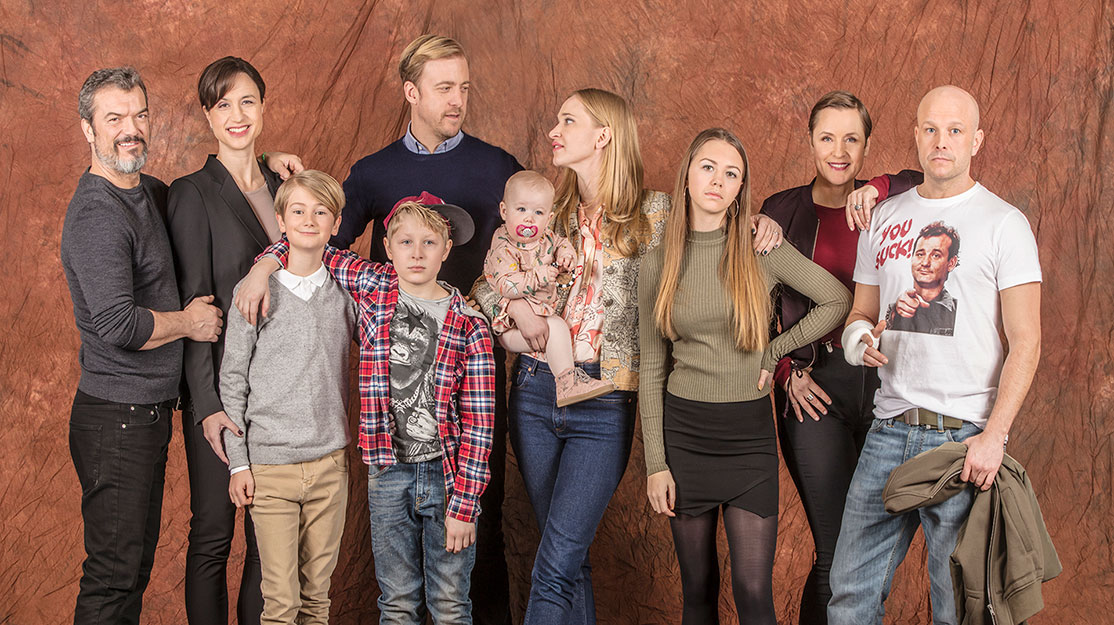 Swedish comedy-drama Bonusfamiljen (The Bonus Family) became an instant hit when it debuted on SVT this year. With a third season already commissioned, co-creators Clara and Felix Herngren reveal how the series was inspired by their own relationship and why they think it can repeat its success overseas.

In Sweden – surely one of the most politically correct countries in the world – it’s no longer appropriate to say ‘step dad’ or ‘step mum’ because the phrases are seen to have negative connotations. So the term ‘bonus dad’ or ‘bonus mum’ has become common parlance.

Bonusfamiljen (The Bonus Family) is a Swedish comedy-drama that follows four characters who have gone through separations as they start new relationships with new partners and all the challenges this entails, from moving in together, coping with exes, raising each other’s kids, having new kids and so on.

Clara Herngren had the idea for the show, which launched earlier this year, when she found herself in this situation with husband and co-creator Felix Herngren, a famous Swedish comedian, actor and director, whose company, FLX, also produced the series.

Finding the pressures of sharing two families immensely challenging, Clara went to see a therapist and this eventually inspired her to fulfil a lifetime’s ambition: to become a therapist herself.

Overwhelmed by the number of people in bonus families who came to see her with the same problems she had faced, she soon realised it was a subject that resonated. “I thought, ‘Oh my God, I have to do a TV series about this,” she recalls, speaking at the Berlin Prix Europa festival, where The Bonus Family was nominated in the best drama series category. “I’d spent so long looking for the perfect drama and here it was, right in front of me.”

With Felix directing and collaborating with Calle Marthin and Moa Herngren (his sister), who is also in a bonus family, they formed a writers’ room and set to work. The result is a beautifully executed bitter-sweet comedy that opens a window on modern family life.

At the centre are Lisa and Patrik (played by Vera Vitali and Erik Johansson), a couple who both have children from previous relationships and now live together to create their own family. Viewers also meet their exes, played by Petra Mede and Fredrik Hallgren, and Lisa and Patrick’s therapists, played by Johan Ulveson and Ann Petrén.

It has proved very popular on Sweden’s public broadcaster, SVT. Such shows usually get between 700,000 to 800,000 viewers but Bonusfamiljen drew around a million, closer to the expected ratings of crime shows that traditionally are more popular in Sweden. Netflix distributes the series, which returns for a second season in January, to more than 100 countries outside of Scandinavia.

Making Bonusfamiljen, which is filmed in Sundbyberg, just outside of Stockholm, created a new set of issues for the husband-and-wife team. “We tried to work together once and we fought immediately, so we promised each other not to work together again,” admits Felix, but this time the process was different and turned out to be therapeutic. “This had a healing effect, because we could talk about someone else’s relationship that was exactly like ours, but not ours,” he continues. “From being a bit horrifying at first, it went to being something we talked about every minute; when we were waking up, eating breakfast, until late at night.”

“We get into character, we scream, we cry,” says Clara. “Felix was almost crying sometimes when he directed as it was so close to our real lives. Talking about these characters and asking, ‘Why did you feel like that?’ or ‘Why did you do that?’ I think gave both of us a better understanding of each other.”

Like all great ideas in the TV industry, Bonusfamiljen will get the remake treatment. NBC, which aired Welcome to Sweden (another FLX production, from US comedian Greg Poehler, about his experiences of moving to his Swedish girlfriend’s homeland) is developing an English-language version. It will be written and executive produced by David Walpert, (who has worked on series such as New Girl and Will & Grace). In Europe, the remake rights have also been sold into Germany and France.

The success of Bonusfamiljen abroad will also be interesting in the context of the region’s most famous export, Scandi noir. Can Swedish comedy travel in the same way that crime shows such as Wallander, Beck and Arne Dahl have?

“Not pure Swedish comedy,” says Felix, “because it’s too local, but a mixture between the two, drama and comedy, could work abroad I think.” He certainly knows this area, as he is very well known in Sweden for Solsidan (The Sunny Side), a series he starred in and co-created that revolves around Alex (played by Felix) and his partner who are expecting their first child as they move to Alex’s childhood home.

He has also had success with the film The 100-Year-Old Man Who Climbed Out the Window & Disappeared, which he directed, and its sequel. Both were coproduced by Netflix, which streams the films outside of Scandinavia and Germany.

His next directing project, Enkelstöten (The Simple Heist), about two middle-aged women who pull off a bank raid, is in the vein of Breaking Bad, where the most unlikely of heroes enters the crime world.

Swapping the male leads of the original 80s Swedish series and an earlier book on which it is based, The Simple Heist taps into how gender roles have changed over the years, in the same way Bonusfamiljen explores how family life is changing.

“Comedy that circles around how humans are, how families and relationships work, can travel quite well,” Felix believes.

Clara, meanwhile, is too busy with her real bonus family and the upcoming third season of the series, which will begin filming in April and air in 2019, to worry about success overseas. “I have no time and fall asleep by nine o’clock immediately,” she says. Besides, she was never a big fan of Scandi noir: “You don’t need murders and stuff like that; everyday life between people is so interesting.”