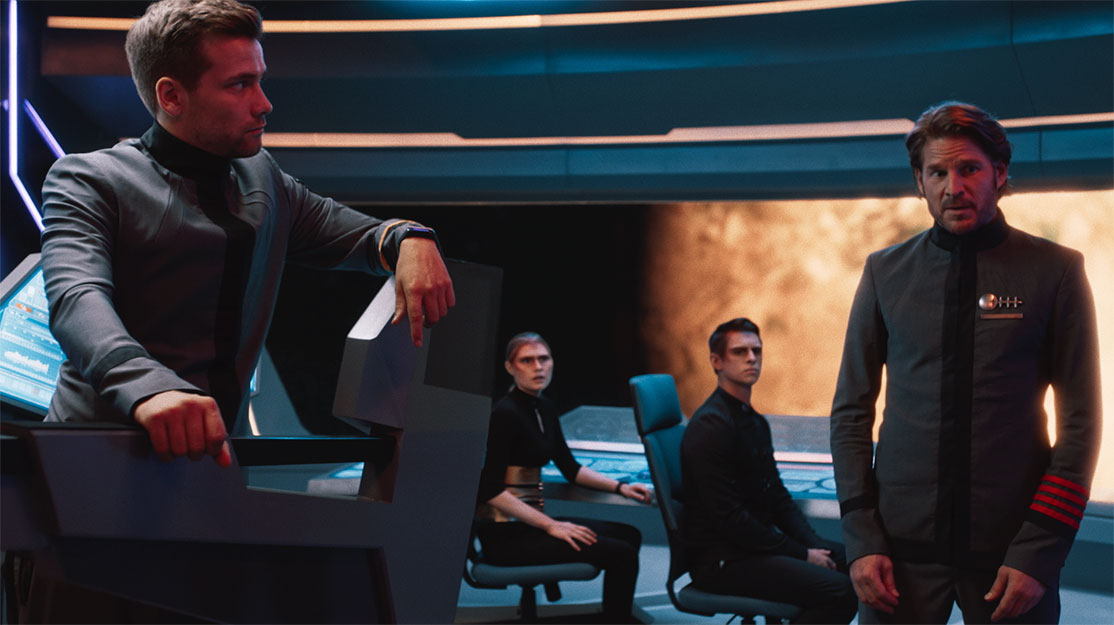 Stars Priscilla Quintana and Oliver Dench join executive producers Mark A Altman, Thomas P Vitale and Chris Philip to discuss the return of sci-fi thriller Pandora, in which a woman questions whether she is Earth’s saviour or its destroyer.

For the cast and crew of a TV series, an appearance at San Diego Comic-Con is an annual excuse to mingle with thousands of devoted fans, screen first-look footage and reveal secrets from behind the scenes.

But it was with a measure of uncertainty that the stars of sci-fi thriller Pandora arrived at last year’s event, with only one episode of the show having aired on US network The CW at the time. They shouldn’t have worried.

“We weren’t sure what to expect,” showrunner Mark A Altman admits. “The show had only been on for a week. Around 130,000 people are there and they’re all there for the Avengers and all these huge franchises. We thought no one would come to our panel. We thought, ‘This is going to be embarrassing.’

“But we walked into this room and there were like 2,500 people there, standing room only, for an hour. They just asked all these questions and we had the greatest time. Then the next day, the cast went to sign autographs and we thought again, ‘OK, who’s going to show up?’ An hour-and-a-half later, we had to cut off the lines so they could make their flight back to Europe.

“We realised at that point that there were these ‘Boxers,’ that’s what they call themselves, fans who are super invested in the show, who really embraced it and loved what [stars] Priscilla [Quintana] and Oliver [Dench] and everyone was doing. It was really exciting, and that’s when I realised we had something special on our hands.”

Debuting in July 2019 and now in its second season, Pandora is set in the year 2199. It centres on Jax (Quintana), a resourceful young woman who has lost everything but finds a new life at Earth’s Space Training Academy, where she and her new friends learn to defend the galaxy from both alien and human threats. When secrets about her own identity begin to surface, Jax must uncover the truth and determine whether she will be humanity’s saviour or the instrument of its destruction.

“Jax experienced a terrible tragedy,” Altman says. “She arrives at the academy and meets this great group of friends, including Xander Duvall, played wonderfully by Oliver Dench. She discovers there’s a lot more to her than the ordinary human being and that she may have the key to literally saving the universe from something very dire. Together with a group of friends, they work together to unlock the mystery and, hopefully, save the universe from annihilation.

“The second season begins with an episode called Things Have Changed, and things have changed. Xander is now a captain, Jax is working with the Earth Intelligence Services and, together, they’re trying to save the universe. Whether they do or not remains to be seen.”

Quintana picks up: “In season one, Jax and Xander were in a place where they were both trying to navigate relationships as well as their careers. I feel like that’s something people in our age deal with a lot in real life, too, trying to figure out what makes you happy and where everything kind of fits in. I relate to Jax in that aspect.

“She definitely loves Xander, but she also knows she has a pretty important job to do, otherwise the universe is pretty screwed. That plays a lot in season two as well and we’ve found our groove a little bit more. We both figured out that we’re in to one another, but we also have other priorities in life. It’s a really good mix this season.”

Distributed by Sony Pictures Television, Pandora leans much more into the relationship between Jax and Xander in season two, while also embracing the adventure of being in space. “We’re spending a lot more time and space on missions and going to exciting and incredible places,” Altman says. “One of the things you see with science fiction right now is so many genre shows are cynical and dystopian. With our show, even when it gets dark, which it does at times, there’s still a hopeful optimism, which is so important given the times we live in.”

Altman’s other TV credits include Castle, Necessary Roughness, Femme Fatales, Agent X and The Librarians, while he has also written numerous books about film and TV franchises such as James Bond, Star Trek, Buffy the Vampire Slayer and Battlestar Galactica. With Pandora, he wanted to create a show that both sci-fi fans and a wider audience could enjoy, while The CW’s blend of action, adventure and family dramas meant it was the perfect home for the show.

“I wanted to tap into what I loved about the original Star Trek, but also it’s been called ‘Harry Potter in the Future,’” he says of Pandora. “I briefly called it The Paper Chase, but nobody knew what I was talking about.”

“Mark is an expert in the genre,” says executive producer Chris Philip, whose Starlings Television label produces with Radioactive Fishtank and Vital Signs Entertainment. “He’s one of the smartest people I’ve ever met and one of the best showrunners. And on the other side is [Vital Signs EP] Tom Vitale, who brought the project to us. He was a network executive and, for 20-plus years, he watched, bought and produced some of the best sci-fi.”

Vitale believes Pandora stands out for its appeal across all audience demographics. “We have hardcore fans who love the story, the cast and what Mark has done with these characters,” he says. “But we also appeal to a broad audience. Mark hit on the best thing earlier, which is the optimism in the show. So many of science-fiction shows out there right now are dour, slow-moving and downbeat. This is a fun adventure series that has deep characters that develop and grow over time. That’s why this is the show that got me excited when I first saw the pitch, read the pilot and knew what a great showrunner Mark was. I just knew this project had all the elements to become a successful show.”

Dench says the show is playing to its strengths in its second season, filmed in Bulgaria capital Sofia, after establishing itself over its first run.

“It’s just the journey of trying to be as true to what we’re doing as possible on set,” he says. “The fact is it’s improving every day, with every episode and every scene. The more people are interested, the better we get, the more of the show we make and the more fun we have.”

“A lot of first-season shows are just trying to find themselves, particularly with genre shows,” Altman notes. “There have been very few genre shows that really nailed it out of the gate. We did a really good season last season. But season two is a quantum leap forward in terms of everything – sets, stories, special effects.

Thoughts are now turning to a possible third season of Pandora, with Altman confident the show has the potential to run for many more years like many classic series in the genre. “The show can keep reinventing itself, and if you look at the great sci-fi series like Star Trek: The Next Generation or Stargate, once they find their audience, they tend to tend to stay on the air for a long time,” he says.

“As long as we can keep it fresh and interesting and have fun doing what we’re doing, the sky’s the limit.”