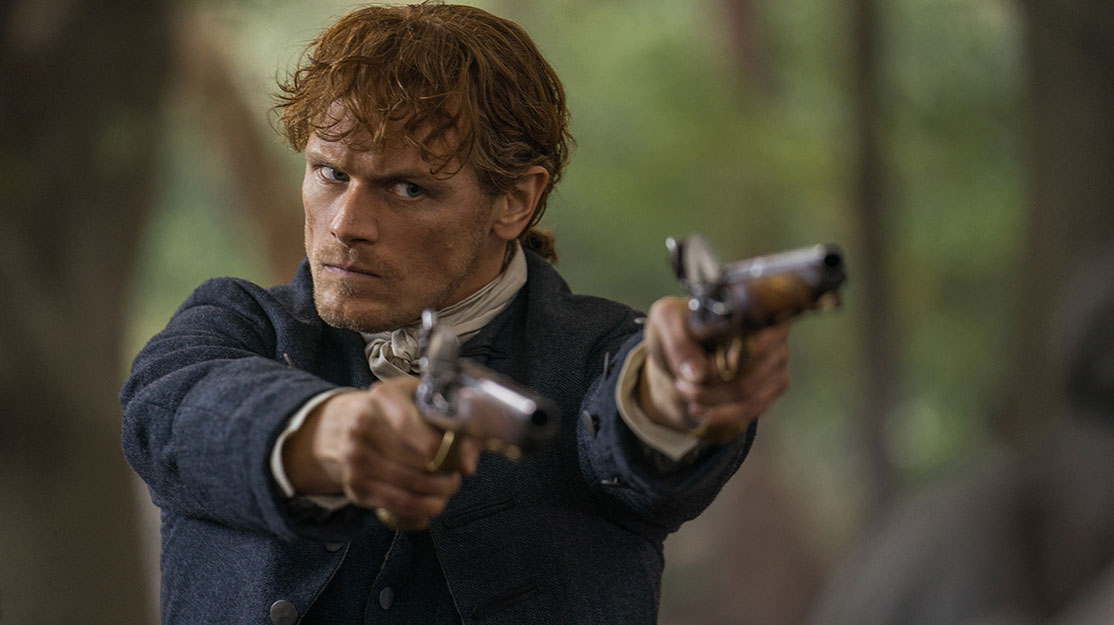 As the time-travelling romantic drama returns for a fourth season, DQ visits the set of Outlander to find out the secrets behind ‘the biggest show ever made in Scotland.’

If you love your period drama costumes to be pristine, look away now. You’re not going to like the following: the costume department on Outlander deliberately sets out to do damage to the immaculate outfits they have spent weeks creating. It’s all in the cause of art, darling.

Co-costume designer Nina Ayres is taking Drama Quarterly on a fascinating tour of her department at Wardpark Studios, the vast former circuit board factory in Cumbernauld on the outskirts of the Scottish city of Glasgow, where Outlander is filmed. She shows us room after room filled with rails carrying clothes with signs such as ‘1970s Ladies’ Stock Blouses’ and ‘18th Century Ladies’ Bum Rolls’ before welcoming us into her secret lair: the ageing and dyeing department.

In this room, a small army of women work diligently with dye, mud, sandpaper and even cheese graters to age the previously spotless costumes worn by the characters in this hugely popular drama, which began its fourth season – ‘Book Four’ – on US cable channel Starz yesterday and rolls out on Amazon Prime Video today.

Based on the immensely successful bestsellers by Diana Gabaldon, which have sold an eye-watering 28 million copies worldwide, the show focuses on a time-travelling 20th century doctor called Claire Fraser (played by Caitriona Balfe) and her 18th century Highlander husband, Jamie (Sam Heughan). In this season, they are trying to carve out a life for themselves in the hostile environment of colonial North Carolina on the verge of the American Revolution.

Ayres explains there is very much a method to her apparent madness. “Every costume in Outlander comes through the ageing and dying department – even the posh stuff. We use grease, sandpaper, cheese graters and a spray gun to spray mud,” she explains.

“Everyone was so much dirtier back then than we are now. Every outfit on this show has to have life in it. It has to have a wear to it. In the 18th century, nothing was new. Everything was repurposed. We call the people in this department the women of mass destruction!”

A poster on the wall of the costume department bears this out. It reads: “There is a kind of beauty in imperfection.”

It is this very attention to detail that has helped make Outlander a global hit. Made by Tall Ship Productions, Story Mining & Supply Co and Left Bank Pictures, in association with Sony Pictures Television, each episode is watched by more than five million multi-platform viewers around the world.

There are four different versions of the medical box, including an ultra-light one that Claire can carry on her horse (which, don’t worry, has not been feeding on the prop hay bales).

The production has had an enormous effect on filmmaking in Scotland, which makes the perfect backdrop for everything from the 18th century Highlands to colonial North Carolina.

David Smith, a director at Scottish Enterprise, confirms: “Outlander makes a significant contribution to the almost £70m [US$90m] in film and TV production spend in Scotland last year, as well as employing around 300 crew in Cumbernauld and taking on nearly 100 trainees to develop their industry skills.

“Scotland’s tourism numbers are also being boosted, with Outlander showcasing Scotland’s landscapes and tourist attractions and some attractions reporting a 92% rise in visitors.”

Wilson underscores that Outlander has transformed employment prospects in the industry in Scotland. “When we walked into these studios five years ago, they were empty warehouses. Now this is the biggest show ever made in Scotland.

“The majority of people on this production are Scottish, but in the past they had to work outside this country. Shows that required their skills weren’t made here. Now they can’t believe they are getting employment in their own backyard.”

Outlander has taken on 23 production trainees this year. The assistant script supervisor on this season was a trainee last year. Wilson, who has also worked on such renowned Scottish productions as Taggart and Rebus, stresses: “It’s about building crew bases in Scotland. Also, you have to give something back.”

The show has also attracted a very dedicated – and vocal – fanbase. It might seem overwhelming to some actors, but in fact the Outlander cast say they embrace the fans’ passion.

“99.99% of them are positive and fantastic,” affirms Balfe, who has won several gongs for her performance as Claire, including two People’s Choice Awards and a Scottish Bafta.

“It’s lovely to see people connected to what you’re doing and see your work having an effect on them. It’s so nice to be part of a community. Someone showed us a video of the Outlander babies. The show had something to do all of them being born. It’s crazy to think that has happened because of something we’re in – it’s wild!”

The very high production values have clearly played a major part in the fans’ love of Outlander, but several other key factors have helped make it such a gigantic, ocean-going hit.

“At its heart,” Balfe muses, “Outlander is a beautiful love story. That is an element which everyone can connect with because it’s something everyone is yearning for or has experienced or has lost. But the show has many other appealing aspects as well. It’s wonderfully written – without that foundation, you can’t go anywhere. If you have got a great story, you’re good to go.”

The final reason for the popularity of Outlander may be that, in these turbulent times, we yearn to lose ourselves in such a richly imaginative, fictional world.

Balfe concludes: “Outlander offers a sense of escapism, which a lot of people need right now. Life is really tough for people at the moment. They’re struggling to make ends meet. That is one reason why the opioid crisis is spreading throughout the world.

“People are feeling disconnected from each other, and the idea of community is breaking down. So shows like Outlander, which have at their centre the idea of family and community, are something that people are really longing for.”