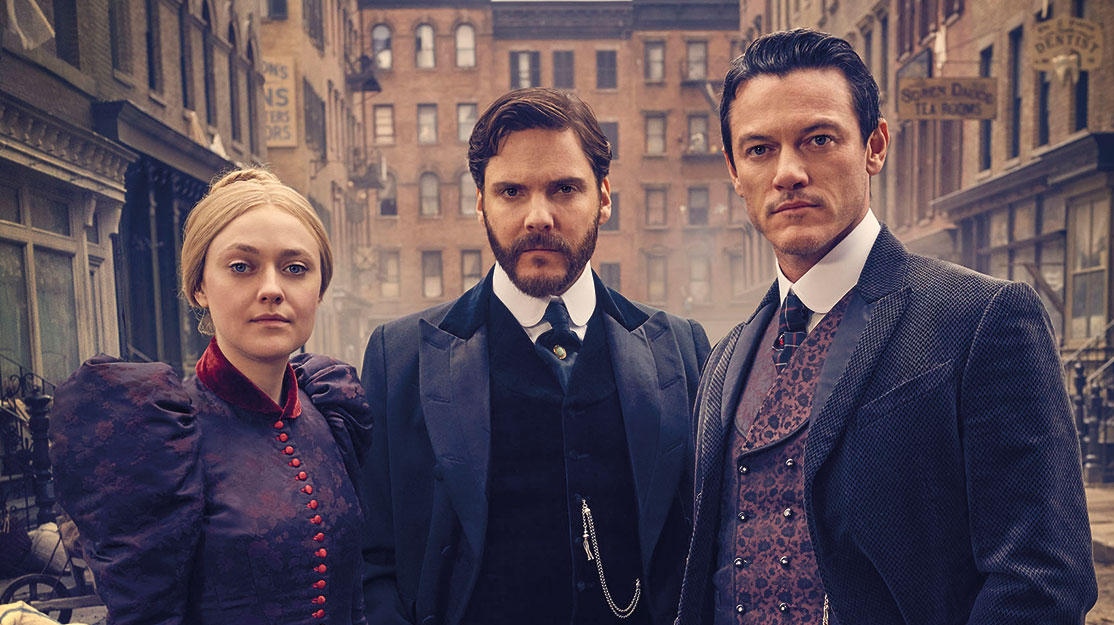 US cable channel TNT turned to Caleb Carr’s arresting novel The Alienist as the premise of its biggest ever drama series. The creative team behind the series, alongside star Luke Evans, discuss bringing the period piece from page to screen.

Adapted from military historian Caleb Carr’s first novel, The Alienist is set in the Gilded Age of New York City in 1896. When a series of haunting, gruesome murders of boy prostitutes grips the city, newly appointed police commissioner Theodore Roosevelt calls upon criminal psychologist (aka alienist) Dr Laszlo Kreizler (Daniel Brühl) and newspaper reporter John Moore (Luke Evans) to conduct the investigation in secret.
They are aided by a makeshift crew of singular characters, among them the intrepid Sara Howard (Dakota Fanning), a young secretary on Roosevelt’s staff who is determined to become the first female police detective in the Big Apple. Here, the team behind the series – coproduced for TNT by Paramount Television and Studio T and debuting on January 22 – give DQ the inside track…

Rosalie Swedlin, producer, Anonymous Content: What made the book such a huge bestseller was the richness of the detail. It was set in such an extraordinary time and had similarities with the world we’re living in today. It never got made by Paramount as a feature film; I believe they had several screenplays and directors, but the project got put on the shelf.
Years later, when Paramount Features opted to start a television division, they decided it was time to maximise the assets of the Paramount feature library. This was the same time as Anonymous Content had just done True Detective. We were approached to do a first-look TV deal with Paramount and I asked if anyone had claimed The Alienist because I’d read the book and loved it.

Writer Hossein Amini (McMafia) was the first person on board and wrote the opening episode and series bible, before TNT picked up the project blind…
Swedlin: Then we had to find a place to shoot the series, which turned out to be a huge challenge because New York today looks nothing like New York in 1896. Just the complications of bringing carriages into New York streets and blocking them off to traffic proved extremely difficult, even though we scouted New York three times.
We scouted Montreal twice and various other places, before finally it was suggested we go to Budapest. Then we needed to find the director who would give shape and vision to the show, and all of us had seen London Spy and The Fall and absolutely loved Jakob Verbruggen’s work. After we all met, it was clear he was the right director for the series.
Jakob Verbruggen, lead director: The appeal of the series was the possibility to create a visual roller coaster, because that’s what the book is. I’ve done The Fall, so there was a connection with serial killers, but what made this series stand out was the unique setting. New York is a city in transformation. This is a world 100 years ago that is quite similar to ours – immigration, depression, how to we treat the weak, rich
and poor.
The series also has an unlikely group of heroes that guides us through this process, and having them come together to catch the greatest evil known to humankind – a serial killer or predator – was quite fascinating.
It’s called The Alienist and it’s about psychiatry, so of course all these guys have inner demons – and to come clean with themselves, to solve the quest, they have to confront their demons. All of the main characters, episode by episode, we peel off their layers and that was an interesting challenge.
Something else that stood out from the book and is very atypical was the killer’s victims – boy prostitutes. It allowed the series to say something about child trafficking and
child abuse.

To tell this story, Verbruggen wanted to cast “the finest of actors,” but he was also looking for some new faces unfamiliar on television…
Verbruggen: Kreizler is somebody who lives on the edge of the spectrum but he’s also a master puppeteer. He’s a foreigner in an America that is finding itself at the time, so [German actor] Daniel Brühl brings that strength and foreign flavour.
For Dakota Fanning’s character, we looked for someone with an enigmatic but strong gaze that carries a secret, which I think she does so well. For Moore, the book is written from his point of view and it’s a very dark world, but Luke Evans brings charm, wit and warmth to the character and he’s the one that takes the audience by the hand and helps them during this journey.
Luke Evans: I’d read the first five episodes but it was very difficult for me because I’d never done [a television series]. So I knew if I did it, it would have to completely pull me in – and it does within the first few pages of the
first episode.
Moore is a very complex character, much more than in the book. He’s massively flawed in so many aspects of his life and personality, but there’s something heartwarming about his struggle. He finds it very hard to hide his feelings and that’s why he’s very relatable for the audience.
Kreizler can be very cerebral, methodical and detached from human emotion because he’s not feeling it, he’s observing it and trying to work out why. Yet Moore is totally drawn into it. I just thought this was a very interesting journey, and the one magical gift television gives you is 10 hours’ worth of story.
I’d never experienced that, I’d only experienced two [on TV], or three in a movie. So it was a challenge to stay in a character and keep the character fresh for six months of shooting but also to go on this journey and see how he develops and changes, and how the people around him see him. It’s a big journey, so it was a wonderful gift. It was a no-brainer for me.

The biggest challenge on the series was to recreate 1896 New York, with settings ranging from Lower East Side tenements to the Gilded Age interiors, as well as populating one of the most crowded places in the world…
Chris Symes, executive producer and line producer: We wanted to tell these stories in a place you could smell and taste; where you could feel the grime, the texture and the overcrowding. As it happens, Budapest turned out to be pretty perfect for our needs: it’s a Gilded Age city built more or less in the same period.
There were one or two streets we could use, not as many as we would have liked, which meant we had to build six blocks of the Lower East Side. It was a huge undertaking throughout the middle of a Hungarian winter, but we ended up with a spectacular set we could redress and turn into different neighbourhoods. We also built it full height – it’s an 18 metre-high set – because extending it digitally would have been such a huge operation in terms of post-production and the VFX budget that it was deemed worth building it top to bottom, which of course gave us complete freedom to put the camera anywhere.
Evans: I’ve been very lucky in my career to work on some incredible sets, and The Hobbit was closest in size and detail to this. It was
like time-travelling every day. You couldn’t often see the ends of the streets. You were immersed, completely, which as an actor only benefits your ability to forget where you are and be present in the time period. Then you add the extras and the smell and the smoke – it was breathtaking.
Verbruggen: We were a bunch of lunatics and detail-obsessed madmen. We weren’t just building the streets but also putting dirt everywhere. If there was a market, there were real meats and the smells were terrible. There were horses everywhere, horse shit everywhere. The research we did was very detailed.

With five directors working across the 10-part series, continuity between the cast and crew was imperative to ensure the style of the show carried across every episode…
Jamie Payne, producing director who helmed the final two episodes: It’s such a detail-rich world in terms of character, emotion, spectacle and scale that there needed to be a constant presence.
We had some of the best talent in the world so, beyond the first three episodes Jakob directed, there were lots of questions about episodes coming up. I was able to look ahead at the scripts so that when the directors came on board, there was already a toolkit for them to understand the style of the show. There was a very clear aesthetic but every director contributed something. You’re also there to give the cast constant support should they need it. They’re literally on set all day, every day and at some point we had two units going.
At one time they were jumping between storylines from five episodes. It helped that Luke, Daniel and Dakota were so close that, during a 10-hour story, they were able to support each other.

The Alienist was originally envisioned as a limited series, so the production decided not to go down the showrunner-led route…
Swedlin: We just chose brilliant individual writers – Hoss [Amini], E Max Frye [Band of Brothers], Gina Gionfriddo [Boardwalk Empire] and John Sayles. We had a very unconventional writers room. They assembled in New York, Hoss assigned the episodes and they wrote them.
When the time came to make the show, McMafia was happening so Hoss wasn’t available, and we didn’t have that creative voice we would have got had we hired a showrunner. Jamie played a significant role in providing an overview, story continuity, character content, and continuity for the aesthetics, so he was critical to making sure the whole show has a coherence.

With Netflix picking up rest-of-the-world rights, talks are already underway about a potential follow-up…
Swedlin: We’ve had early discussions about a second season and whether it would be based on Angel of Darkness, the follow-up novel, or whether we would take the characters on a completely original journey. It’s still to be determined.