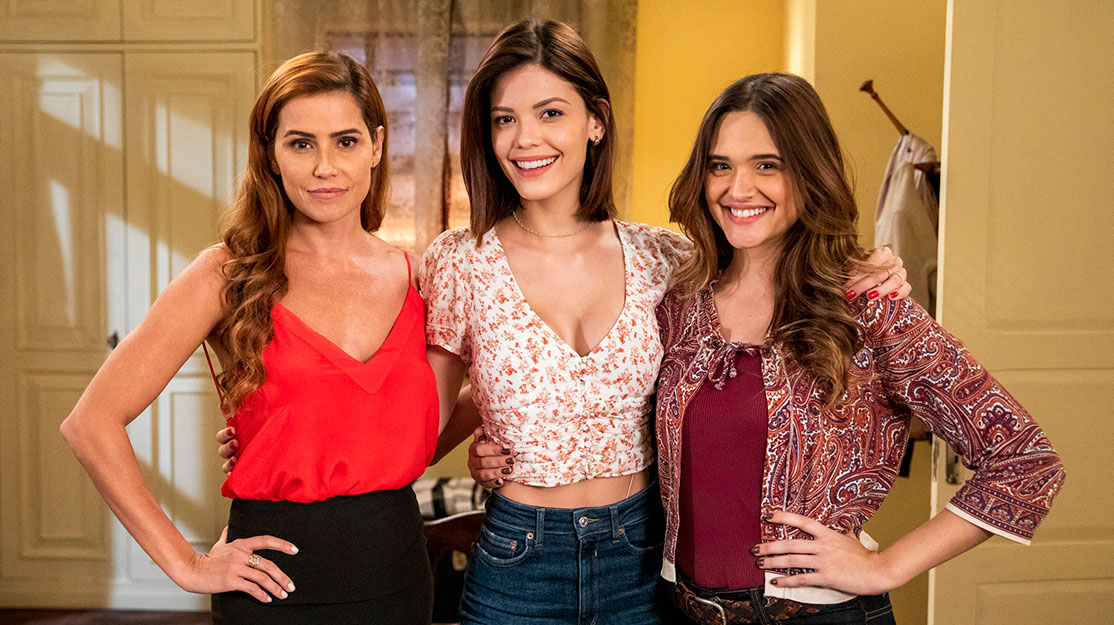 Daniel Ortiz, the writer behind Brazilian telenovela Salve-se Quem Puder (Run for your Lives), reveals the origins of this romantic comedy about three women who have to change their identities after witnessing a crime.

Brazilian telenovela Salve-se Quem Puder (Run for your Lives) tells the story of three very different women who must adopt new identities after witnessing a crime, leaving their futures tied together forever.

Written by Daniel Ortiz and directed by Fred Mayrink, the romantic comedy introduces Alexia (Deborah Secco, A Second Chance), a rising actor on the cusp of new heights; Luna (Juliana Paiva, Total Dreamer), a young physiotherapy student who is close to achieving her diploma; and Kyra (Vitória Strada, A Time to Love), who is planning her wedding.

The three unconnected women are in the Mexican city of Cancun when, as a devastating hurricane strikes, they witness a crime together, forcing them to enter witness protection and put their dreams on hold.

The series is particularly notable for how it brought to life the hurricane, using 10,000 aerial images covering 154 hectares of Cancun to create a 3D reproduction of the city at Globo Studios.

The 70-part Globo series first debuted in Brazil in early 2020, with the second part of the show due to air later this year.

Here, writer Ortiz tells DQ about creating the series, the challenge of sustaining a story over dozens of episodes and why he thinks telenovelas are still winning viewers despite the popularity of shorter-run dramas.

Tell us about the story of Run for your Lives.
It’s the story of three women who cross paths in Mexico before a hurricane hits the city of Cancun. Each of them is about to realise a dream in their life. Kyra is on her way to Mexico to make arrangements for her wedding that will be held there; Alexia, an up-and-coming actress, is realising her dream of working on a telenovela that will have scenes shot in Mexico; and Luna, who is Mexican, is close to graduating in physiotherapy and earning her diploma.
But as the hurricane hits the city, all three become witnesses to a crime and need to enter a witness-protection programme to escape from an international gang. They need to leave their old lives behind. They change to new people with other identities. They need to get away from family and friends, and are declared dead after the passage of the hurricane.

What was the inspiration behind the story?
I was motivated by the question, ‘Is what I dream for my life really what will make me happy?’ My idea was to make a telenovela about three people who have a very strong dream and, after a twist of fate, are forced to consider whether the life they had before represented true happiness.

How do we meet Alexia, Luna and Kyra and follow the story through this trio of characters?
Luna is Mexican, daughter of Brazilians, who works at a Cancun resort to pay for her studies and who will be responsible for welcoming Alexia, an actress who is set to film a telenovela in the city. Kyra travels to settle the details for her wedding at the resort. They get to know each other, become friends, witness a crime, and join the protection programme together. The friendship of these three women is the thread running through the telenovela. They are forced to live together to survive.

How was the project developed with Globo?
I had this idea, produced a synopsis and it was approved by the director of the broadcaster. There were some challenges, like the production of the hurricane through special effects. We have a hurricane that destroys the city, and this was an essential factor for the story, mainly for the symbolism of this hurricane passing through not just the city but also the lives of the protagonists.

What are the starting points of the story necessary to build a telenovela that can last dozens of episodes?
First you need a thread that has the breath to sustain between 100 and 150 chapters. In this case, the main characters witness a crime, are presumed dead, enter a protection programme and start a life with new identities, all of which provide many elements for the story. We also have additional captivating characters who have defects and qualities; who make mistakes and have successes.

How would you describe your writing process?
It’s very intuitive. Most of the time, when I talk with friends, walk or watch TV programmes, I don’t think about the telenovela. I know the ideas will come when I sit down, turn on a song and get to work on the computer.

How did you cast the main roles and what did the actors bring to the trio of protagonists?
I had always wanted to work with Deborah Secco. She is an extremely versatile actress who can blend humour and drama, which we needed for her character. Juliana Paiva, although younger, is another very experienced actress. Vitória Strada, who is associated with more dramatic roles, plays a comedic character for the first time. She is a kind of Lucille Ball among the three.

How did you work with director Fred Mayrink to bring the production to the screen?
This is my third telenovela with Fred. He was the artistic director on Haja Coração [Burning Hearts] and Alto Astral [Forever & Ever]. We have had a partnership for six years. Every time we work together, our communication improves even more. Our harmony is great, always with many exchanges of ideas, which is essential to the success of a show.

How involved were you during the filming, especially when it came to creating visual effects like the hurricane?
I tried to follow production as much as I could. Writers cannot always be present at all stages. When hurricane scenes were filmed at a water park in Rio de Janeiro, I entered the pool with the actresses to try to feel the experience together with them. The writer’s work is very lonely, so when you have an opportunity like this it is very nice and it helps us to understand the production process.

What themes did you want to focus on?
Will what we have always dreamed for make us happy? Or can we find happiness in other places? During the story, with all the transformation in the characters’ lives, these dreams and life choices are put to the test.

The characters face the abandonment of technology and social media to protect their new identities. What is your opinion about social media and why is this a subject you would like to discuss?
Social networks are a great tool to improve communication between people. They arose to bring countless benefits and helped us to reconnect with people we hadn’t spoken to in a long time or with whom we had lost contact. That was the objective back then. But today, in general, people devote much more time to social networks than to social circles, meeting with friends or family. It’s a matter of balance that people are no longer managing.

You have previously worked in Brazil, Mexico and the Middle East. How do their storytelling approaches differ?
They differ according to the culture and society of the country. You have to study how these traditions work. When I made a telenovela in the Middle East, for example, the story was set in Kuwait, Saudi Arabia and the United Arab Emirates. I studied hard to create a romantic story full of mysteries. I spent weeks in Kuwait, lived for six months in Dubai and traveled to Lebanon.
When all is said and done, it’s not that the stories differ – what changes is how the writer tells them. They are stories of love and mystery, but they also respect the public and the culture of each country.

Why do you think this telenovela can attract an international audience?
It’s a romantic comedy full of adventures and mysteries. It brings together a little of all genres. It has drama, romance, comedy, suspense… we sail through them all. There are very captivating characters and it has an accelerated rhythm. The theme is universal and the protection programme exists in several countries.

Why do telenovelas continue to attract viewers in the age of drama series?
As long as there are good stories to be told, telenovelas will continue here. There is an audience that is loyal to them and enjoys watching them. Telenovelas will not cease to exist just because we have so many drama series these days. There is an audience that likes the daily dramaturgy and this is a habit in many countries. One thing does not exclude the other. It is another product as an option for the viewer.