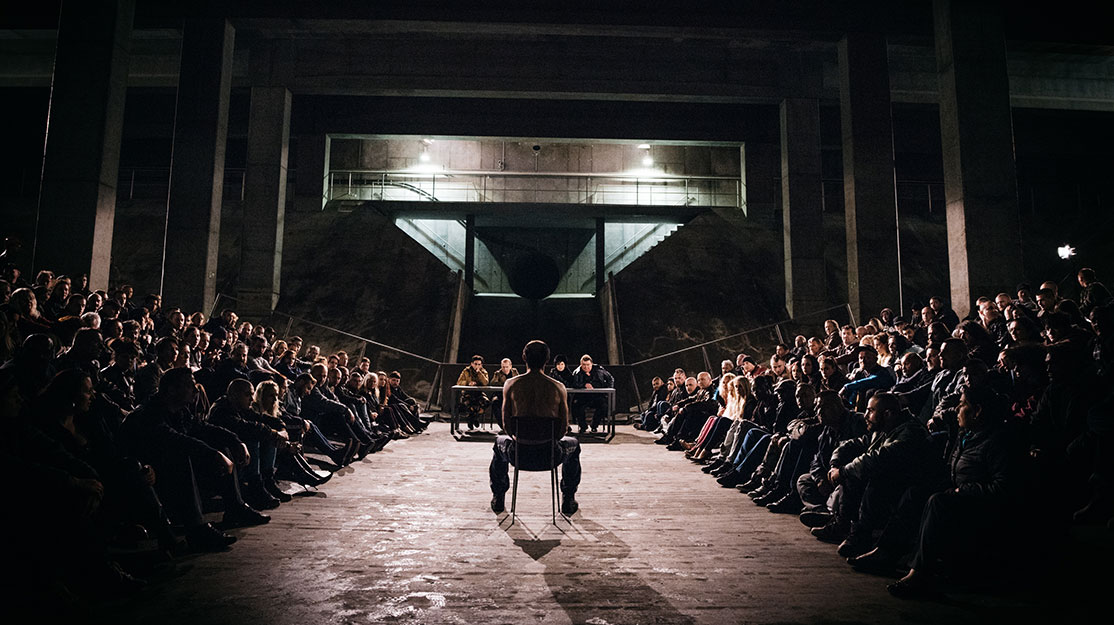 Fritz Lang’s classic thriller M is reimagined for television by David Schalko in M: Eine Stadt sucht einen Mörder (A City Hunts a Murderer). DQ met the director and the cast of the unsettling six-parter on set in Vienna.

At the time of its original release, Fritz Lang’s iconic film M was a groundbreaking piece of cinema that mixed social drama, police procedural, the criminal underworld and the hunt for a serial killer.

As such, it’s unsurprising that this 1931 classic, made during the German Expressionism period and one of the first German ‘talkies,’ is often cited as the inspiration for modern television genres. And it’s perhaps equally perplexing that there hasn’t been a television adaptation of M – until now.

M: Eine Stadt sucht einen Mörder (M: A City Hunts a Murderer) isn’t a strict adaptation, however. Instead, creator and director David Schalko (Braunschlag, Alte Geld) has reimagined Lang’s feature, which saw the police, a gang of criminals, the press and other members of society search for Peter Lorre’s child killer – a character not regarded simply as a monster but as a product of the society in which he has grown up.

For M: A City Hunts a Murderer, the film’s themes have been transplanted from 1930s Berlin to modern-day Vienna, which serves as the backdrop to this series co-commissioned by Austrian public broadcaster ORF and German pay TV network RTL Crime. Produced by John Lueftner for Superfilm, it is distributed internationally by Beta Film and is due to air this year. The series will have its premiere at Berlinale’s Drama Series Days event this month.

The sinister six-part thriller, written by Schalko and his wife Evi Romen, sees a capital confronted with a series of child murders, transforming the open and lively city into a society under total surveillance.

At first, the children disappear – but then bodies start to turn up, leading to a tabloid frenzy over the crime spree and the lack of action by the police. But while the ambitious Minister for the Interior tries to make his mark, the criminal underworld also steps up its search for the killer.

The Minister is busy scheming when DQ visits the M set on a bright and sunny day of filming inside the dazzling foyer of Vienna University’s library and learning centre. Like a scene from The West Wing, he is walking and talking with The Publisher in an attempt to use the media to spread fear through the city and get a new security law passed.

“How do you remake M? Firstly, why the hell do you want to remake M? If you want to remake a masterpiece, you need a really good reason to do it,” says Klaus Lintschinger, head of television features at ORF, answering the question of why no one has done it before. However, he continues, ORF and RTL Crime did have a good reason for doing it, but only in a contemporary setting.

“David likes storytelling with a lot of characters and a lot of storylines, so the template of M offered him an opportunity to tell a really big story that affects us today,” Lintschinger explains. “It’s essentially the story of how politics tries to do the right thing but ends up doing something catastrophic. I never saw it as a remake and I never saw it as a sequel. David would refer to it as a homage, but that’s not right either. It’s a re-reading of it.”

Moving the drama to Vienna was a natural choice for Austrian filmmaker Schalko, though it was important the limited series wasn’t strictly a Viennese show once RTL Crime came on board, in what is the channel’s first original production. The German network had been looking for the right project and the “unique” M provided the right platform.

“It’s one of the best movies ever made, so if you start original production, you should start with a bang, you should start big,” says Klaus Holtmann, RTL’s executive VP of digital channels. “We couldn’t resist doing it.”

Securing rights to Lang’s film proved to be the trickiest hurdle to overcome in development, with financing from the broadcasters supported by Beta Film and tax incentives offered in Vienna and Austria.

Both Lintschinger and Holtmann say they signed up at the pitch stage, drawn to working with Schalko and his take on M while also understanding that they wouldn’t be able to make wide-scale changes to his vision. “It was a very creative process but if you commit to something like M, you can’t turn it into a telenovela,” Holtmann notes. “It’s still M and the core and soul is still there, and that’s why we shared the same vision.”

That vision doesn’t include a tourist’s romantic view of Vienna. Instead, the focus is on the dark side of the city and the implications of a child killer roaming the streets.

The 14-week shoot certainly embraced the influence of German Expressionism on Lang’s original, utilising unusual camera angles and shadows on the snowy landscape, often creating an atmosphere that makes it appear as if filming took place on a sound stage as opposed to on location.

Early footage of the series suggests a deeply dark and creepy tone. What adds to the eerie and unsettling style is that, like Lang’s film, none of the characters have names. They are only referred to by their job titles or roles in society, which actor Moritz Bleibtreu says mirrors what is going on in contemporary society.

“For people with power, whether it’s in business or politics or the press, there’s a big lack of empathy going on right now,” says Bleibtreu, who plays The Publisher. “It’s not about the people, it’s about the mechanisms of power and how to use them. It’s about the fact that a president isn’t simply elected, there are people who get them to that point – whether they write about them or some guy from Russia is pushing buttons and making people believe this guy is the right guy. There are always people in the background who make these things happen.

“He’s one of those guys,” Bleibtreu says of his character. “He wants power. It’s the only agenda these people have. Fuck money, money is not interesting. Power is interesting. To be able to do whatever you want, that’s power. You need money as a tool but that’s not the goal. The goal is power. That’s what makes them so dangerous and so hateable.”

Bela B Felsenheimer, an actor and musician known as the drummer in German band Die Ärtze, plays The Mystic, a rich man who is drawn into the police investigation with an apparent will to help the parents, though it’s clear he has questionable motives. “He has his own agenda,” Felsenheimer reveals. “He thinks he’s the chosen one, and he’s connected to the murder. This connection is pretty important, but I can’t reveal too much. He’s living in an all-white apartment with dolls dressed in clothes he got from the missing children, so he’s a creepy character.”

A self-confessed fan of Schalko’s work, Felsenheimer also admits to having watched Lang’s M more than 10 times – and then again when he got the part. “My character isn’t there in the film; there’s a strange guy mentioned in one scene but he doesn’t appear. Then I got the scripts and they were the most brilliant scripts I’ve ever read,” he says, comparing Schalko to Quentin Tarantino. “Every single person, even a bystander on the street, has got their own story and it’s interesting. They’re not there just to fill a space. It’s a really great TV event.”

Meanwhile, Lars Eidinger and Verena Altenberger play the parents of the first murder victim. Naturally, their relationship is put under incredible strain by the loss of their daughter, and Eidinger says the way they react, in keeping with the tone of the series, is unnatural.

“David tries to ask what it means for the couple to lose the child, but more as a metaphor. They lose their future and their past,” he explains. “It’s a very complex structure and it has several layers that work metaphorically, but it is not very naturalistic. This is something I really like. They face everyday problems, but to deal with them on a different artistic level is, for me, much more inspiring.

“I was concentrating on being as truthful as possible to the moment when someone tells you your child is dead. I’m not going into the first cliche when you are crying because usually it’s not like this. Those parents become a bit insane – sometimes it means something in their lives changes so they cannot continue in the way they did, and sometimes it turns their world upside down. This is what the series is about.”

Altenberger says that while the initial focus is on the parents in the aftermath of their daughter’s murder, each episode expands to bring more characters into focus, while her own character’s darker side also emerges.

“Nobody is good or bad. Everybody is both, and sometimes that can change within a human life,” she explains. “I look for the balance in both sides of my character, and in every character in the show, to see how they react to each other. Every tiny little piece of the script matters.

“I’m pretty sure the scripts fit our society today. It’s even more than a general fear, it’s a hysterical way of accusing each other with the media and questioning something.”

As Shopgirl, Marleen Lohse reveals her character is carrying “a very deep and dark secret.” She works in a children’s store selling clothes, until she falls in love with one of the parents of the murdered children and finds a way to integrate herself into their family.

From the key characters to the bit-part players, each is “really fighting for something, and that makes it so special,” Lohse says. “Every scene has big moments. It’s about something bigger – the whole of society. Luckily I don’t carry this woman with me, but this project makes me think a lot.”

When David Schalko revisited Fritz Lang’s M four years ago, he found himself unable to forget it. But rather than simply remake the classic film for the small screen, he wanted to completely update it and add new elements to the story, such as social media, that would change the way it would be told.

He was also interested in exploring what he refers to as a “crisis” in contemporary Western democracy, considering M was released three years before the Nazis secured power in Germany.

“That was the idea,” Schalko says, “and also that there’s no main role or main actor – the town is the main thing. It’s something that’s very good for the series because Fritz Lang didn’t have the time to tell all the stories. Now we have the chance to tell it all, so we have more depth to the story and the characters.”

He describes the series as a puzzle that was particularly difficult to solve due to the fact that there is no protagonist at the heart of the story. Each episode also features different characters, offering new angles and perspectives on the story.

“It’s dark,” Schalko says. “We tried to make associations to German Expressionism, so you have the feeling of some things filmed in the studio with shadows, but it’s also a mixture of naturalism, which makes its own style. We hope it’s something very individual.

“That’s why I say it’s a tribute. The thing is not to be in a tennis match with Fritz Lang but to use this idea in the 21st century. It’s really a tribute to Fritz Lang’s work because I’m a big admirer. And if it’s half as good as the original, I’m happy.”

The large number of characters presented challenges in terms of both writing and the shooting process. But ultimately, Schalko says, the story isn’t about them but the kind of city they live in.