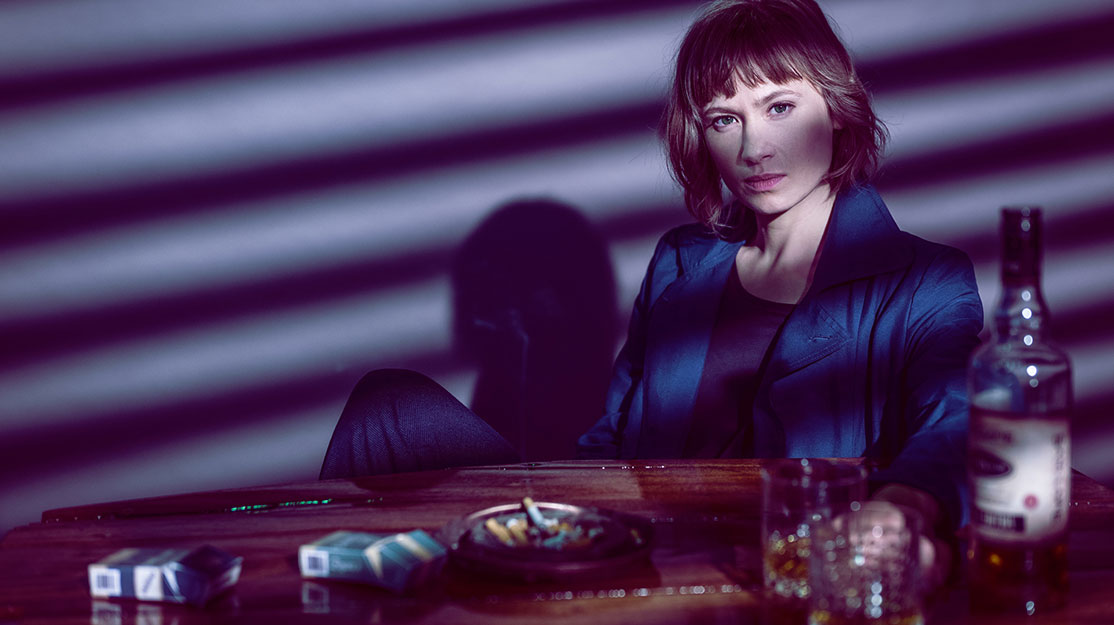 With the country’s penchant for crime drama, there aren’t many German cities that haven’t been on screen. Hit long-running drama Tatort, for example, is a collection of police stories set in different locations around the country, while the Soko series is set in Munich, Stuttgart and Leipzig, among other places.

As a result, when the production team behind six-part drama Dunkelstadt wanted to take viewers somewhere different, they turned to Belgium and the Flemish city of Antwerp to create the show’s brooding, anonymous backdrop.

Dunkelstadt (Dark City) introduces private detective Doro Decker, who wanted to follow in the footsteps of her late father, a respected police officer who was killed in the line of duty. But an inability to follow orders and a problem with authority figures meant her police training came to an abrupt end. Now she solves cases on her own while also investigating the suspicious circumstances of her father’s death.

Episode one sees a client ask Doro to find out whether her husband is cheating on her. But it soon emerges that the husband is under threat after receiving information not meant for him – and his attempt to hand it to Doro ends up with him getting shot, leading her into a case that will have political ramifications.

“She’s very ambitious but she also has a lot of demons,” explains Alina Levshin (Rivals Forever – The Sneaker Battle, Never Too Late For Justice), who plays Doro. “She’s fighting against herself. She’s ambivalent, she’s not really the buddy type. She doesn’t have many friends. She likes to do her work on her own and nobody comes in her way. She has a problem with alcohol, and that was interesting for me to see, as she’s not very old.

“She’s not a man and she has all these issues we actually expect from male detectives. So I was curious about to try this out. I also have this very strong passion for justice. She’s really helping people because she has a good heart so, all in all, she’s a good person, although she doesn’t appear like she is the hero.”

On the surface, Doro may seem pretty tough, confident and aloof, but she’s also emotionally fragile, series director Asli Özge says. “She’s tough outside and you cannot get through her very quickly. You have the shell and what she shows outside, and that contrasts nicely with what she is in reality.”

The procedural series comprises six different stories, covering themes such as homelessness, family, wealth, politics, the police, religion and cults, while each episode also contributes to the overarching serialised story about Doro’s investigation into her father’s death, which is not as clear cut as it initially appeared.

“She gets information and talks to people and dresses up like somebody else, so each episode I had to dress twice like somebody else,” the actor says, speaking to DQ at Berlinale, where the show was screened ahead of its premiere on ZDFneo in February. “I was dressing up a lot and playing somebody else in Doro’s character. I could fool around as other people. That was fun. It’s her way of getting deep into something, to get people to trust her. It was not so easy [to play]. It was fun reading it, but then I had to play it, so we had to figure out how she would talk to different people. But that was a really cool aspect of the series.”

Özge joined the production, which was filmed over just 51 days, when two episodes had been written. She talked with Levshin about character and playing Doro before the shoot began in Antwerp, which the lead character describes as “my town.”

“Germany is a country with all these series like Tatort or other crime dramas, so everywhere has been used [on screen before]. If you watch something, you can tell where it is,” the director says. “When the producers said they were thinking of shooting in Belgium, I thought it could be something special. So we went to Antwerp and we really loved it. We can do something visually strong there. That was the most important part for me.

“We didn’t define it as a city – we didn’t show any Belgian places. The language is German between the actors but the ambulances are different, police uniforms are different and the police cars are not the police cars in Germany. That was the interesting part, creating this world. But it’s still realistic. It’s not like a fantasy. It could be anywhere.”

While the location is undefined and rooted in reality, this only adds to the atmosphere of the series. From the setting and narrative voiceover to the comic book-style credits sequence and the lone central character facing her inner demons, Dunkelstadt has many of the trappings of a traditional film noir.

Levshin and Özge say they never set out to make a show that stuck to a particular blueprint, instead aiming to create a modern detective series with a noir sensibility.

“It’s a modern film noir. I never talked about any [particular] film so I really went there completely free,” Levshin says. “I thought, ‘OK, this is the location, I can do something.’ But there was not even one image in my mind about film noir. I really completely ignored it. That’s the best way to think about it – to try to forget it.”

“My last film, Aug Einmal [All of a Sudden], was kind of a film noir. But I never had it in my mind, because I wanted to make a psychological drama,” Özge continues. “Then I understood how it was perceived in Germany and how, actually, people need something like that because there are so many crime stories. What I like about Dunkelstadt is Doro is a rebel and not everything she does is perfect.”

Dunkelstadt marks Özge’s first television series, following credits on other films such as Hayatboyu (Lifelong) and Köprüdekiler (Men on the Bridge). She says making the show was a “big difference for me, it was shocking,” noting the shorter preparation time she had with her lead actors – Levshin, Rauand Taleb (Doro’s young assistant Adnan Musa) and Artjom Gilz (police commissioner Chris Lautner).

“What was good was I could bring them together for three days so that we got through the whole script together. [That way], we knew what was not working for them and for me,” the director says. “Then on set, on a film I would normally do 30 takes or something – I really try everything. But here I shot every take a little bit differently. I didn’t repeat the same thing, I always changed the cameras so the lens was different, so I could use any part of it in the editing, which in the end was not a problem. It was very quickly and fluently edited, so that was the good part. It helped – and I will now take that idea into my films.”

Filming in Belgium with a multinational cast and crew also proved challenging, with French, Turkish, German and English among the languages spoken on set.

The fact Doro is in almost every scene meant the schedule was particularly unrelenting for Levshin, though the actor admits she knew what she was getting herself into. “I knew before that was going to happen, it wasn’t a surprise,” she says. “You have to have discipline, but I was happy when somebody else came in. In every episode, there’s one or two scenes that are not just with me. So whenever those scenes would come, I would have 15 or 20 minutes off. They were long days, but we had really good stunt coordinators and people who would help. There was a lot of support. But after that, I needed a holiday!”

Levshin says she would love to take the role of Doro further should a second season be commissioned by ZDFneo. The series is produced by Zeitsprung Pictures in coproduction with Brussels-based AT-Prod, with distribution by ZDF Enterprises.

For now, she is just proud of starring in a series that stands out in the crowded German crime drama market. “Firstly, there is a female in the middle, and then the film noir style. There is a lot of crime drama in Germany, but we don’t have this type,” she concludes.

“She’s not a hero. We actually wanted to make it unfriendly and we were always struggling, thinking, ‘Is this too unfriendly? Will they hate me as a person?’ She’s really groggy, she doesn’t give a shit really. She never smiles. She’s an anti-hero. That’s how I feel about it.”