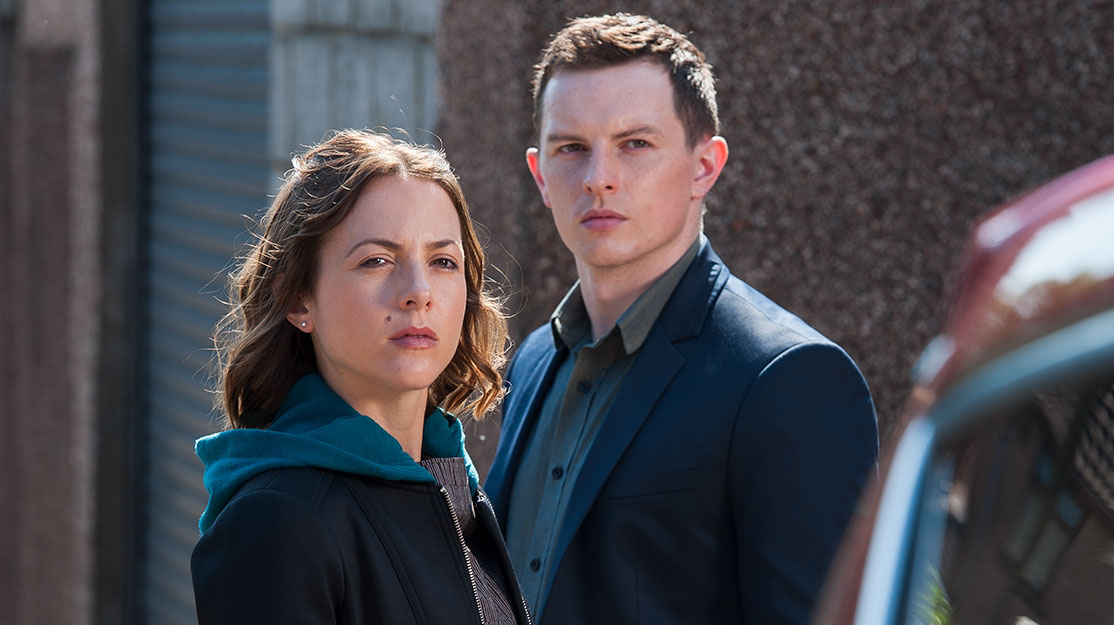 Off with a Bang

When it first aired in 2013, Y Gwyll (Hinterland) marked a watershed moment for Welsh drama. Capitalising on the moody visuals also seen in Nordic noir hits, the series was filmed simultaneously in Welsh and English as part of a deal between broadcasters S4C and BBC Wales.

S4C and BBC Wales have now ordered two follow-ups, Un Bore Mercher (Keeping Faith) and Craith (Hidden), both of which will be filmed back-to-back in Welsh and English.

But before those programmes air on S4C in November this year and January 2018 respectively, the Welsh-language broadcaster is going solo on another original series that aims to follow in Hinterland’s successful footsteps.

Bang, created and written by Roger Williams, is the story of loner Sam (Cuffs star Jacob Ifans), whose life is transformed when he comes into possession of a gun and starts to break the law. Meanwhile, his ambitious police officer sister, Gina (Stella’s Catrin Stewart), is on a mission to find the owner of the weapon, against the backdrop of the shooting of a local man that raises questions for Sam and Gina about their father’s murder.

From the opening episode, which debuts this Sunday, Bang is a gripping thriller that slowly unwraps Sam’s decent into a life of crime, reflecting his own hope for a better life with that of Gina, who is constantly seeking a higher role in the local police force.

“For a long time, I have felt like a lot of Welsh drama doesn’t really tackle story. It has been about the aesthetic of the show and tends to be very slow in that Nordic way,” creator and writer Williams says, admitting he hadn’t aspired to write a crime drama when he first started Bang. “But one of the things that made this project attractive was the idea that we’ve got a gun that comes in and changes people’s lives in a very human and hopefully real way.”

Eyeing the new status Welsh drama enjoys in international circles, Williams was keen make the series accessible to non-Welsh speakers. From the outset, however, his company Joio and production partner Artists Studio (The Fall) knew they didn’t want to follow the Hinterland model, which involved essentially making the show twice on the same budget.

That meant Williams wrote his bilingual script in a naturalistic way, mirroring the blend of Welsh and English that is used in day-to-day life in Port Talbot, the South Wales town where the series was filmed and set.

The production took over a disused building beside the town’s railway station and turned it into a production office with room for edit suites and the make-up, hair and art departments, firmly rooting the series within the community that would form the backdrop of the eight-episode drama.

“We didn’t do that thing where we went down there for a couple of weeks and only shot certain scenes,” explains Williams. “We decided we were going to establish ourselves in the town, so we moved in in March and just finished in August. We very much wanted to root ourselves in the town because, for me, Port Talbot is a very important character within the series.

“This is a town that, for the majority of people, the only relationship they have with it is when they travel on the M4 motorway over the town. They don’t really go into the town or visit the seafront. It was very important to us that we saw the area and the town and found those places that people haven’t necessarily seen on TV before. That becomes important then when you’re trying to give it an identity for an international audience.”

When Williams first began developing the show, it was set in an unspecified location. But the writer’s connection to Port Talbot – he has lived there for 12 years – meant it became a natural setting for the drama that plays out.

Describing the decision to place the series in Port Talbot, Williams echoes some of the sentiments made by UK journalist and broadcaster Jon Snow during his MacTaggart lecture at last month’s Edinburgh International TV Festival, where he spoke about the media’s responsibility to reflect a greater level of diversity.

“I was down on the beach one day with the dog, looked up and thought, ‘I haven’t seen this place on TV. I haven’t seen this environment on TV,’ and I saw an opportunity to be the first to reimagine the town in a TV drama,” says Williams. “One of the things I learned very quickly was if we had any hope of [Bang] being an international success, it needed that visual identity, and that sense of place then becomes very important.

“What people generally think about when they think of Welsh TV is Hinterland and these wonderful vistas and views and landscapes. The challenge for us, then, was going in a different direction. For people who live in South Wales generally, Port Talbot is a place they don’t know about, and that certainly fed into this idea that it’s a place of secrets, a place where, under that motorway, there are things going on that you don’t know about.”

Williams speaks of a creative harmony on set that is central to the founding principle of Joio, which takes its name from the Welsh word that roughly translates to ‘enjoyment.’ “One of the things that drove us to set up the company was that we wanted to allow creative people to get on with what they do well. Certainly from the feedback I’ve had from the people who worked on the show for us, it was a very pleasant change from the way other companies operate,” he says.

“We very much brought on people we knew were capable, talented and creative and then gave them permission to create in a way they wanted to, and that’s something we’ve done with every single project.”

A former chairman of the Writers’ Guild of Great Britain, Williams is already developing a second season of Bang, which would continue to follow the “unfinished business” between Sam and Gina while still set in Port Talbot. In fact, he says he has imagined what happens to the siblings over three seasons – and believes writers should spend more time future-gazing when it comes to bringing a new drama to television.

“Often writers do that trick of not knowing where it’s going to go, creating uncertainty and an opportunity to go somewhere surprising in the second or third season, but they haven’t actually worked out where they’re going to go,” he says. “So when they get to it, it’s never going to be that satisfactory because you don’t have the same plan that you did for the first season. I spent two-and-a-half years on this project and I know the second season, if it happens, won’t have the same gestation. So a lot of people chuck a curveball in at the end and it becomes a bit of a curse as they move forward and have to write the second or third season.”

Series in the US, however, have a better sense of momentum, as writers are often challenged to map out where the show will head in later seasons.

“We don’t generally do that in the UK,” Williams continues. “There’s that thing of development hell that a lot of writers find themselves in because it takes two, three or four years to get that commission. You get it and the show’s successful, and then the commissioner is like, ‘Right, let’s have another one.’ The writer is often so exhausted having produced that amount of work under that much scrutiny.”

For now, at least, Williams is hopeful Bang can become the next international hit series to come out of Wales and continue Hinterland’s legacy, with Banijay Rights on board as the international distributor.

“Hinterland was a bit of a game-changer,” Williams adds. “There are three shows being made for S4C at the moment and they’ve all got distributors attached, so there’s a definite change in the way people are looking at the work that’s coming out of Wales.”