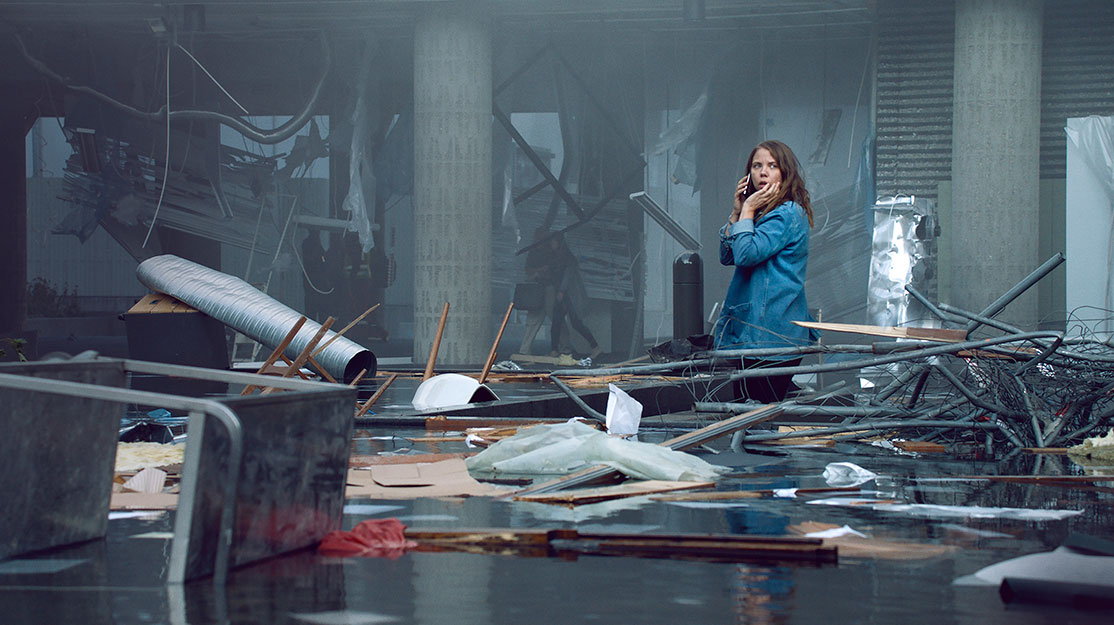 Sara Johnsen, the co-creator and writer of Norwegian drama 22 Juli (July 22), tells DQ about her approach to dramatising the devastating terror attacks that struck Oslo and the island of Utøya on that date in 2011.

For Norwegians, July 22 is a date that will live forever in infamy. On that day in 2011, the country witnessed its deadliest ever terrorist attack as eight people died in a bombing in the capital, Oslo, and a further 69 young people were killed in a shooting on nearby island Utøya.

Anders Breivik, a Norwegian extremist critical of Muslim immigration and European liberalism, was later jailed for 21 years for committing acts of terror and voluntary homicide.

Screenwriter and director Sara Johnsen was also in Oslo that day, working on her third feature film, Uskyld (All That Matters is Past), when she heard a big bang. “I thought it was thunder so I went outside and looked at the sky,” she recalls.

“Then the news started to come. We saw it was an explosion and then we found out there was a shooter. We then understood it was a terrorist attack and became really frightened. There were a lot of worries and emotions, and concern for all the victims and the innocence of our country. Nothing like this ever happens in Norway.”

Two years later, Johnsen and her director husband Pål Sletaune started work on a series about the shocking events that rocked the country. But rather than simply dramatise the attack as it unfolded in Oslo and then on Utøya, they were inspired by the approach used for Treme, HBO’s New Orleans drama set in the aftermath of Hurricane Katrina in 2005.

“I felt it was impossible to create a fictional person who wasn’t really there to represent someone who was really there,” Johnsen says. “How could you choose which person to represent? It still felt very close in time to the terror attack. But we were watching Treme and both thought this was a really interesting way to work with catastrophe and the consequences, by looking at the people indirectly involved.

“From then, we started to work with this angle and, doing all the research, we got more and more of an idea of how to create the series.”

They took their idea to pubcaster NRK in 2014 and found the broadcaster immediately receptive. Kjetil Østli and Ola Henmo worked with the showrunners as researchers over the following two years, with Kjersti Wøien Håland then joining a writers room that was set up to shape the storyline and the scripts. Gjyljeta Berisha co-directs alongside Sletaune, with the NRK-produced drama distributed internationally by DRG.

The six-part series is set before and after the attack, culminating in Breivik’s trial a year on from the atrocities, with viewers following the story through five fictional characters: Anine, a journalist for Aftenpost; Anne Catherine, an anaesthesiologist at Ullevål hospital; police officer Eivind; teacher Helga; and right-wing blogger Mads.

Anine’s investigation into the terrorist’s childhood was inspired by Aage Borchgrevink’s book A Norwegian Tragedy, while Anne Catherine, Eivind and Helga were constructed from interviews with medical staff, police officers and teachers, respectively. Mads was created to represent right-wing voices on blogs, discussion forums and other websites.

The terrorist responsible for the attacks, however, is rarely shown, played by extras on the three occasions he is seen on screen – and even then he is only shown from behind, adhering to the creators’ desire that the show be a story about how terror affects society and its people, rather than the orchestrator.

Johnsen says she and Sletaune felt a lot of pressure and faced many ethical challenges when creating fictional characters from the real accounts of those who were involved in the aftermath of the attacks.

“We are using a lot of real experiences and creating fictional characters. It’s a delicate matter because sometimes you feel some people might think, ‘that’s me.’ But we talked to many people and told them they could be anonymous,” she explains.

“That was challenging, to turn real life into drama. In reality, things tend to happen really suddenly and then nothing happens for a long time. It doesn’t have a natural dramaturgy, so you have to work out how to dramatise these real events. That was perhaps the main challenge, organising time.”

What shocked them most during their extensive research was how people found the systems they worked in actually hindered their ability to do their jobs. “All the time, they were thinking about budgets, money and reporting to their boss,” Johnsen says. “For me and Pål, this wasn’t something we thought about beforehand, so it was something new to us.

“When we started to work with the hospital, we heard how it was going to merge with another hospital and the doctors felt suppressed because they couldn’t say what they thought and couldn’t speak freely because of the hierarchy in the hospital. As an artist, I’m not used to that. If I want to fight with my boss at NRK, I just do it. I’m not afraid he will fire me. So I was very naive, not knowing how these systems work and how people feel it.

“Also, in the police, the boss doesn’t even know how it feels to be a police officer. It was all very interesting and enlightening for us. That was not so present from the start; it was something we learned when we did the research.”

Initially, each episode of the series was to be set in a different precinct – the police, hospital, the newspaper office and so on – returning to July 22 each time to see how events unfolded in those arenas. “But after we had written some of those, we thought it was too boring, so we started to create a more traditional drama with characters,” Johnsen admits.

“The really difficult thing was writing characters without giving them personal problems. When we got some feedback from a reader, they said there were too many characters and the audience wouldn’t be able to follow the story because they wouldn’t be able to get interested in the characters. That really stressed me out. We spent a lot of time thinking about it. Then we had this challenge to tell everything factual that happened on July 22, and it’s difficult to combine it with the drama. That was a puzzle.”

Episode one opens before July 22, when a van delivers six tonnes of fertiliser to a property belonging to Anders Breivik. A fertiliser bomb was responsible for the explosion in Oslo. The first instalment also introduces many of the central characters and highlights some of the problems they face in their jobs. Episode two then covers the bombing in the Norwegian capital’s government quarter, with journalists watching smoke billowing around their office and teacher Helga searching for her missing son as stunned survivors mix with emergency service workers racing into action.

Subsequent parts then cover the Utøya shooting, the immediate aftermath of the attacks and the trial.

When it came to recreating the bombing – an explosion so big it rocks the characters mentally and physically – Johnsen says they had to manoeuvre the characters so they would be in town to see what happens. “The head of drama told us we could afford one big special effect, so we first planned for Helga to see it [the explosion], but then we wrote Anine’s story so she also would be in the centre and she would see the government building after the bombing.

“Pål and I wanted to recreate the feeling of chaos in the town but, at the same time, some other characters just see the smoke from a distance.

“With Utøya, we knew we did not want to be there during the shooting as our characters could not be there, so the challenge was how to tell the story from a distance and still feel the tragedy and terror. We found out Anine could be sent there by her boss as the news about Utøya came. The trauma team at Ullevål is also an important element in the storytelling, focusing on the way the doctors reacted when all those wounded young people came in.”

Central to the development and production process was the showrunners’ desire for realism at all times, a quality heightened by their decision to largely cast unknown actors, save for Alexandra Gjerpen (Norsemen) as Anine.

“Pål took responsibility for how to create this realism and what it was going to look like,” Johnsen says. “He’s very concerned about details, and that’s a very important part of the series. The human faces and their reactions to terror – that’s the main idea for the visuals. There are a lot of realistic details from the hospitals from which you can tell a bigger story, so that was important. He improvised a lot in the beginning of each scene. He doesn’t plan too much, which is very demanding but it made for good footage.”

Johnsen then spent a year-and-a-half in the editing room alongside the filmmaker’s longtime editor, Zaklina Stojcevska, cutting the material.

She says working alongside her husband also meant they both stayed fully engaged in the project. “We sat up almost every evening when he came home from the set – we sat in our kitchen and went through the next day,” she explains. Things would change because maybe we didn’t get a location or I would have to rewrite some dialogue. It’s been a very good experience that we don’t regret. This incident is so much bigger than our own egos, so we would always go back to the real events and say, ‘This is important because it happened.’”

Ultimately, making July 22 has been “the most meaningful project I’ve ever done,” says Johnsen, whose work on the show has seen her nominated for the Nordisk Film & TV Fond prize, which recognises  outstanding writing of a Nordic drama. It takes place as part of the Göteborg Film Festival’s TV Drama Vision event.

“It’s been really engaging and very sad, sometimes too sad. But, at the same time, it’s been really meaningful and important,” she adds. “I really like to work for a long time on something. NRK gave us a lot of freedom, responsibility and trust from both the producer and head of drama. The working process felt very important.

“I want to tell people what happened, but the good thing about this story is it’s really anti-violence. It really shows the consequence of killing someone. It’s not making it into something exciting. It shows the consequences for society – for every dead person, there are 200 people affected. I hope it’s going to work in a humanistic way.”