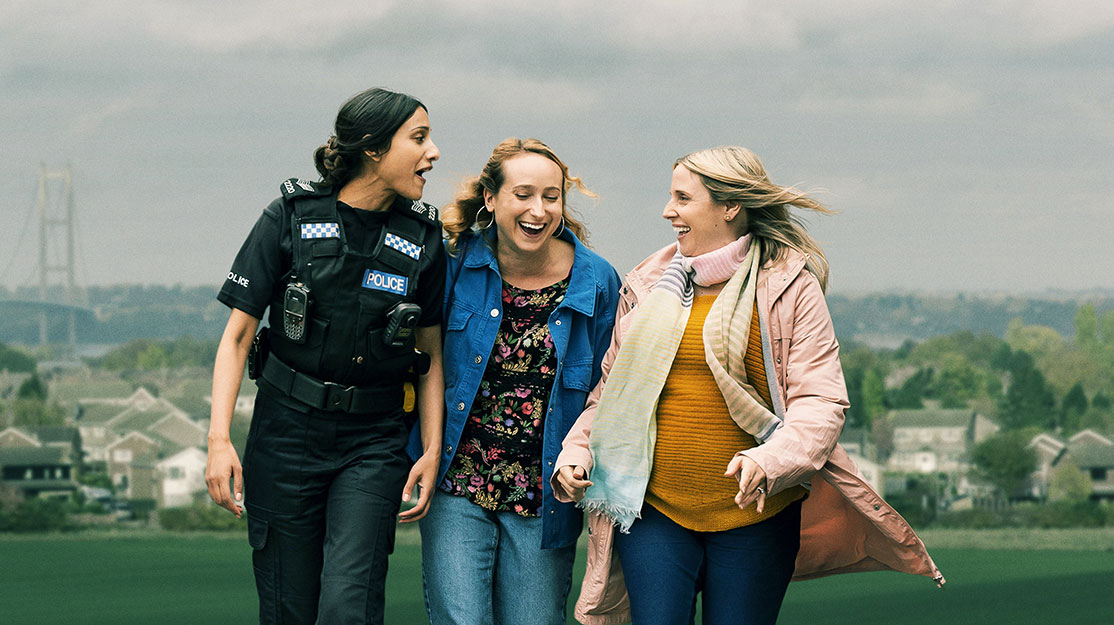 Hullraisers star Leah Brotherhead speaks to DQ about making the Channel 4 comedy and how it set out to show it’s not always grim up North.

Whether it’s the brooding landscape of a Scandinavian city or an idiosyncratic setting like a haunted house or a submarine, locations are often described as being characters in their own right in drama series. But when it comes to Channel 4 comedy Hullraisers, its setting is less a character and more the heartbeat of the show.

The city of Hull, in the East Riding of Yorkshire in north-east England, runs through every aspect of the series, from the establishing shots and frequent aerial footage that breaks up the action to the fact that star Leah Brotherhead and creator Lucy Beaumont are both Hull natives.

“I’ve had such a lovely messages from people I went to school with,” Brotherhead tells DQ, “and one of my really good mates asked, ‘Is some of it based on my life?’ which is amazing because people just see themselves so much in the show, which is what you want, isn’t it? That it feels so close to people from Hull.

“Mostly, people have just embraced how joyful it is and how much it celebrates that sense of community, which is so strong in Hull – and it is a joyful city.”

The six-part series celebrates female talent on and off screen with a story that explores what it means to be a working-class woman juggling work, kids, demanding friends, family and the frustrating parents of other children, while trying to have some fun too.

Toni, played by Brotherhead, is described as a tornado of chaos: an actor with no acting jobs who adores her four-year-old daughter Grace and soulmate Craig but is stuck between wanting to be the person she used to be and the person she is becoming.

Her best friend Rana (Taj Atwal) is a confident policewoman ruled by her libido, who would rather go on a stream of disappointing dates than settle down, while Paula (Sinead Matthews), Toni’s older sister, can’t understand Toni’s restlessness and constant need for more.

Hullraisers was filmed across Hull – largely in the city’s Newland Avenue area – as well as in nearby Leeds, and Brotherhead says the local reaction has been “really positive” since the series launched in April. She even filmed some scenes a stone’s throw from her childhood home.

Most of the cast aren’t from Hull, however, but other Northern or Midlands cities that, like Hull, have been drained of money and left in a “pretty sorry state,” Brotherhead says.

That’s why it was “so lovely and fresh to do a show that wasn’t about it being ‘grim up North,’” the actor continues. “We all really jumped onto that, as well as the fact Toni and Paula are in nice, functioning relationships. There’s lots of love in that family and across the board, and the comedy doesn’t come out of people being antagonistic or cruel.

“We all felt it was really important for there to be a lot of warmth and love between the characters and for the comedy to come out of that, because that is what it’s like up North. Things might be a bit difficult or you’re struggling in some way, but everyone is there for each other and there’s a lot of loyalty and loyalty to where you’re from.”

Splitting her time between the UK and Berlin, Brotherhead’s screen credits include White Gold, Bridgerton and Zomboat, a comedy set during a Zombie apocalypse in Birmingham that forces two sisters to flee for their lives aboard a narrowboat.

Toni, she says, is a great character and “a mess” – but one people can relate to, especially those in their 30s who aren’t quite ready to let go of their 20s and embrace the next stage of their lives. Toni’s anxiety also stems from her belief that everyone else has things figured out, when that couldn’t be further from the truth. “In her mind, Toni definitely thinks everyone else has got these things sorted and it’s only her who hasn’t, which is just incredibly relatable to everyone of that age,” Brotherhead says.

The actor put herself forward for the role because she thought the idea of a series set in Hull was “fucking great. I just wanted to be in it because it’s set in Hull and I thought, ‘I know I can do the accent so hopefully I can be someone in it.’”

In the series, which is based on Israeli comedy Little Mom, viewers are quickly introduced to the dynamic between Toni, Rana and Paula, who are all operating on different planes at similar stages in their lives. Paula, who is relatively laid-back and content with her situation, is utterly bemused by Toni’s often erratic lifestyle, while Toni finds herself looking to mirror the carefree ways of Rana, who refuses to settle down.

As a result, Toni is caught between emulating Rana and making the most of what she does have in her life, like Paula – from chasing an elusive night out without the kids to volunteering to run the baked goods stand at the school fair.

“Paula is queen of her castle, while Rana is brilliant in the way she genuinely loves her life,” Brotherhead says. “I love that there isn’t some dark secret Rana is trying to cover up to explain why she likes going out, having fun and meeting up with different guys. It’s just actually where she is right now and she’s absolutely loving it.

“With Toni, she had a kid and all her focus was put into that, but now she’s getting to the place where Grace is at school and it’s like, ‘Oh, I’ve got some of my life back’ and going, ‘Shit, what is my life? What do I want my life to be?’ She’s not very good at taking one step at a time and figuring it out.”

Filming took place in summer 2021 when the UK was still making its way out of Covid-19 lockdowns. Though some freedoms were restored to the general public, the cast and crew working on Hullraisers continued to operate under strict guidelines.

That meant the cast got to know each other really well, as they were kept together in a social bubble, “so it was a very good job we did get on,” Brotherhead says. But the biggest challenge was not knowing whether the show’s jokes were landing, owing to the fact the crew’s facial expressions were concealed behind masks.

“I do a lot of theatre and when you’re doing comedy or landing a joke in theatre, you know very much so if you’ve landed that joke or not because the audience will laugh or be silent,” she says. “What was difficult filming this in Covid was everyone on set who wasn’t an actor was wearing a mask the whole time. Already everyone’s got to be quiet when you’re filming, but you can’t even tell what anyone’s facial expressions are. You’re like, ‘Was that funny? Was that good?’”

Produced by Fable Pictures and distributed by Sony Pictures Television, Hullraisers is written by Beaumont, Anne-Marie O’Connor and Caroline Moran, with Ian FitzGibbon directing. Beaumont describes working with the team behind the camera as a wholly collaborative experience, with Beaumont encouraging her to deliver lines in a different way if a joke didn’t feel right.

“Everyone works in different ways and there’s no right way of doing anything. But I really love having that freedom,” Brotherhead says. “All the characters were drawn so vividly and everyone had such a handle on their characters that it was just so joyful to do any improvisation. Everyone really knew who they were, and Ian would always have us doing little pickups or messing around with a little moment. He was amazing steering that ship. It was such a team effort and hopefully it brings across the kind of joy that we all genuinely had making it together.”

That joy is indeed apparent throughout the series, from the performances to the visual gags and the use of music, all of which contribute to showing the titular city in a new light.

“It’s the joy of a forgotten city that has usually been the butt of the joke,” Brotherhead says. “All my life growing up, Hull was always the butt of the joke. You’d be watching an episode of Blackadder and there’d be a joke about Hull. I feel like we’re laughing with the city, not at the city, and enjoying the eccentricities and the uniqueness of Hull.”