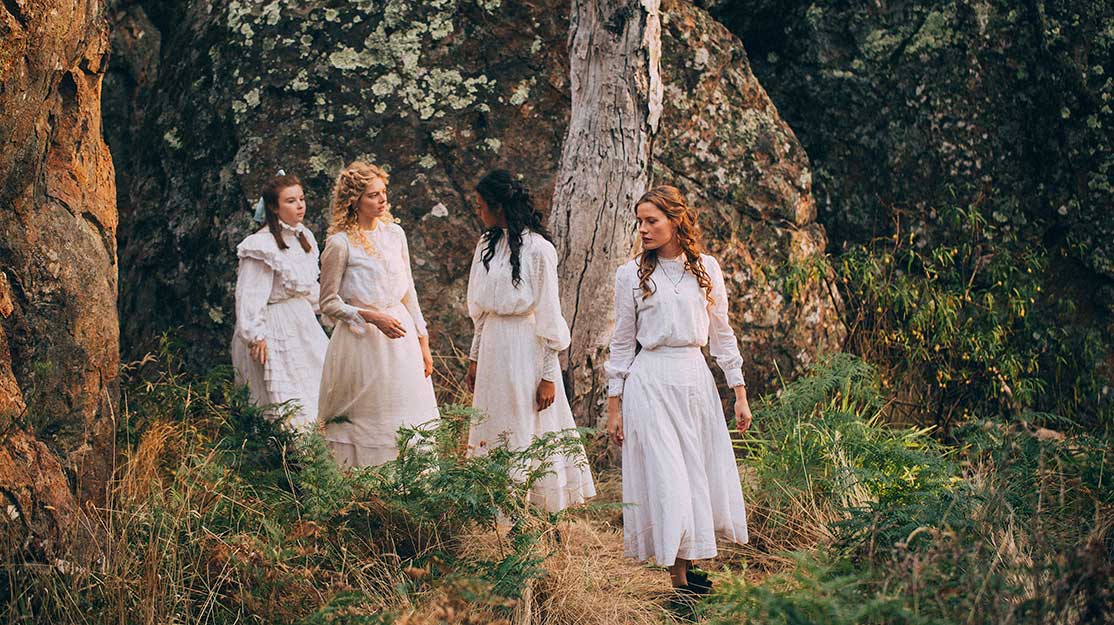 All the hallmarks of a classical period drama are present and correct, but do not be deceived by the stately mansion, bonnets and corsets on show in Picnic at Hanging Rock. In fact, this intoxicating six-part series is a thoroughly modern retelling of Joan Lindsay’s classic novel – from the scripts by Beatrix Christian and Alice Addison to the predominantly young cast headed by Game of Thrones’ Natalie Dormer and the dazzling directing led by Larysa Kondracki.

After a red-carpet world premiere at the Berlin International Film Festival in February, Picnic at Hanging Rock is at last getting its domestic debut on Foxtel’s Showcase channel in Australia this Sunday. Dormer stars as English headmistress Hester Appleyard as the story plunges viewers into the mysterious disappearances of three schoolgirls and their governess on Valentine’s Day 1900.

Exploring the event’s far-reaching impact on the students and staff of Appleyard College and its enigmatic headmistress, theories soon abound, paranoia sets in and long-held secrets surface as the Rock exerts its strange power and the dark stain of the unsolved mystery continues to spread.

The cast also features rising Aussie stars including Lily Sullivan, Samara Weaving, Madeleine Madden and Ruby Rees as some of the students. It is produced by FremantleMedia Australia, with broadcasters including Amazon Prime Video in the US, the BBC in the UK, Germany’s Entertain TV, France’s Canal+ and Sky New Zealand already importing the series following deals with distributor FremantleMedia International.

Aware of the revered 1968 film adaptation directed by Peter Weir, Kondracki initially turned down the chance to direct this new version. But friend and Fremantle executive Stefanie Burk passed her Lindsay’s book and asked her to give it a look.

“I had the same reaction that every crew member had too, which was ‘No, no,’ but the second you read it, you said, ‘OK’ – the script goes back to the book and then expands it,” the director says.

“Bea is basically a genius and Alice is super talented,” she says of the writers. “Bea’s unbelievably emotionally specific, thematically specific and very collaborative. She just writes in this beautiful way. The scripts, similar to the book, are open to interpretation and it’s just such a rich playground. We had so much fun – and tears as well.”

Dormer agrees Christian is one of a kind. “She’s a playwright originally and when you read her stage directions, she can communicate a thought or a feeling in a few lines, in a way I haven’t seen a writer achieve before. Joan Lindsay can hint at something in one sentence and Bea’s described it and run with it.

“She and Larysa are both not scared of the spiritual, the transcendental, the absurd, the magical or the dark. It’s strong in tone with this beautiful combination of Alice and the other directors but, fundamentally, producer-wise and creatively, it’s this beautiful hybrid of Bea’s image meets Larysa’s vision.”

Like remaking Sherlock for the BBC or taking a new version of Othello out onto the stage, Dormer believes the time was right to do Picnic at Hanging Rock for a new generation, describing this version as a “gothic horror” with touches of dark comedy thrown in for good measure. “But really it’s also a huge exploration of what are the formative years of young girls, and a woman [Appleyard] who thinks she knows what women should be and them rebelling against that. In a way, it’s our version of [1988 US movie] Heathers. I have a nutty theory that all the girls are different versions of what Hester could have been.

Rees, who plays Edith, picks up: “When I read the first script, I thought, ‘This isn’t Picnic at Hanging Rock.’ This is so far away from any preconception any Australian – or any person – has about this story. It’s not Picnic as we know it or have ever seen it before.”

Sullivan, who plays Miranda, admits that following Weir’s film was intimidating, as the characters in Lindsay’s book already exist on screen. But this new version, she says, takes viewers on an emotional journey, sending them back and forth through the events.

“It’s like a psychological twisted tale, and we’re not children. We don’t need answers,” the actor notes. “Finding these characters was such a gift and it’s quite weird how it is such a contemporary piece. It has an energy that’s really exciting. My character is definitely a woman who is aching and so frustrated because she’s definitely born in the wrong time.”

“It’s interesting because Harrison’s character is from England and mine is from France, and all the other girls have been sent to this school by their families from all around Australia and the world,” Bessis explains. “So we’re all like a very close family. At the beginning, Dianne is just a good employee and does what she’s told to do. She’s very thankful to Mrs Appleyard for giving her a job but, little by little, she toughens up and learns to be herself and have her own opinions of things and emancipates herself a lot.”

Shooting took place in Melbourne and in locations across Victoria, as well as at the real Hanging Rock, a spiritual place considered sacred by native aboriginal communities. The week before filming there, however, the cast and crew were all struck by illness.

“At one point, one of our main actors was missing every day,” recalls Kondracki. “In the middle of a scene, they’d just fall ill. And this was a great testament to the crew. I remember one of our gaffers in the bushes vomiting and then coming back, and when I asked if he wanted to go home, he just replied that he’d lost a few pounds. Nobody gave up and, at the end, there was a crime scene-level clean-up. The point is we were going to the rock the following week and everyone was thinking this was the rock saying, ‘If you think this week’s bad…’”

Sullivan describes filming at the rock as “amazing, exhausting, disorientating,” while Dormer adds: “In the end, there was no acting required as a British actor coming to Hanging Rock and being overwhelmed by the energy and awe-inspiring power and landscape of it. It has an energy.”

Having played Margaery Tyrell on Game of Thrones for five seasons of the HBO series, Dormer admits she wasn’t looking for a role in another period drama. “I didn’t want to get into a corset again but I was intrigued by the beauty and the psychology of this,” she reveals. “It really grabbed me. And Larysa wrote me this beautiful letter basically saying no one else can play this role as well as you.”

“Which is true,” the director interjects.

Dormer continues: “Hester Appleyard could very easily be a villain. And Larysa gave me this great pitch: ‘You can find the vulnerability, the weakness and the sadness in her that will make the audience empathise as well. You will make her an anti-heroine as opposed to a villain.’ She said, ‘I know you can do that.’ I was like, that’s a tough specification with that character. We found we had a shorthand quite quickly. There’s something about this relationship; we’re both very candid people, we’re both very straight-talking.

“There’s a David Lynchian, Lewis Carollian dark surreality to our Picnic, mainly given by Larysa’s camera choices, that to me is just so bold, fresh and exciting and it just gives it this signature feel. That’s when you know you’ve got something special, when you can’t describe a show and say it’s a bit like ‘this meets this’. If you can’t do the hybrid pitch, you know you’ve got something distinctive.”

Picnic at Hanging Rock is the latest in a wave of adaptations of Australian novels and films, from Mystery Road and Romper Stomper to Wolf Creek and Wake in Fright. But regardless of its source, the cast believe this series will make its mark around the world.

Sullivan, who also starred in Romper Stomper, admits she was hesitant before signing up to both series. “But both of them are a beautiful way to map how far we’ve come and how we are still weirdly dealing with the same issues that girls in the 1900s were. Instead of corsets, we now have waist trainers from the Kardashians. It’s all still being resold. The immigration of Asian culture in Australia back then is now Islamic culture coming in, and we’re having the exact same conversation 25 years later.”

Rees adds: “Australia is not always seen to be a country that can create art that holds its own, and I think this version of Picnic at Hanging Rock will put us on the world map in the way the film did when Peter Weir made it.

“Australia has been doing remakes of old stories for a long time. It’s just now becoming mainstream. It’s fabulous because if the original story has enough content that we can retell it in every century, then why not do it? So many things in the series are still 100% applicable today, which is scary. That’s not a good thing that we’re still discussing problems for women who were alive and well in the 1900s in 2018. That’s a negative – and this show just drives a stake into the heart of that.”