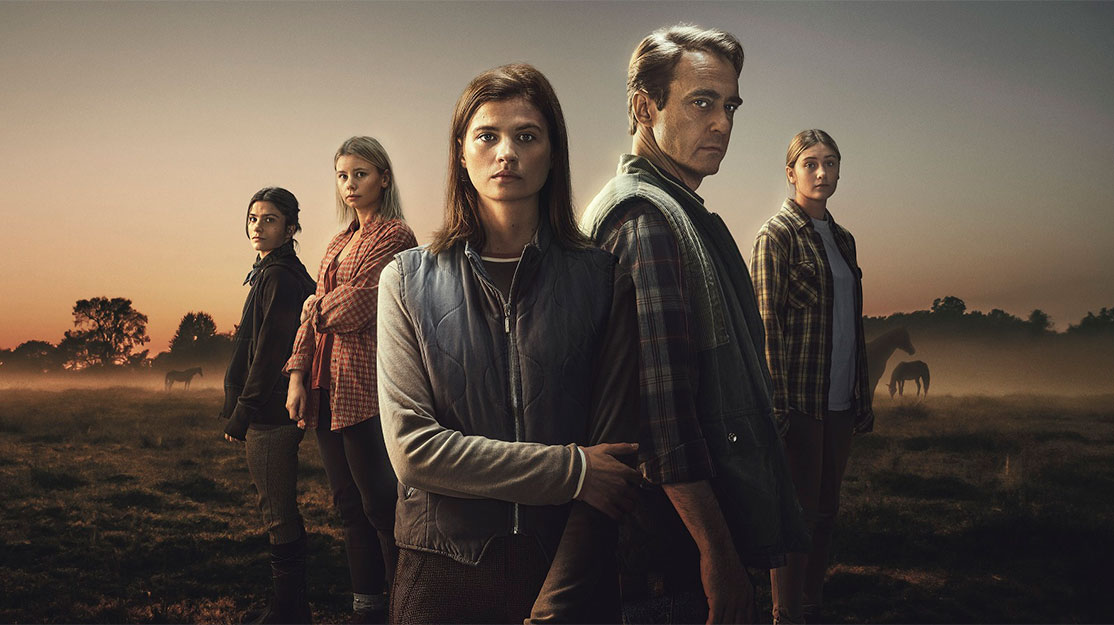 The true story of an abuse scandal at a Swedish equestrian centre is dramatised in a new eight-part drama. Writer Ulf Kvensler and director Molly Hartleb take DQ inside the making of Nattryttarna (Riding in Darkness).

Swedish drama Nattryttarna (Riding in Darkness) is based on the true story of a shocking abuse scandal that took place at an equestrian centre in the 1990s. It is also one that has been produced in collaboration with the person whose life it is based upon.

“I can promise you that it will be a tear-jerking, unpleasant and hopefully touching series that offers darkness and abuse of power, but also a glimmer of hope that, in my opinion, the truth will finally reach the light,” said Sophie Jahn about the series, which is based on her own experiences growing up with an abusive father.

The series opens when schoolgirl Molly (Saga Samuelsson) arrives at the Heddesta riding school to work with and live close to the horses. She shares a room with stable girl Frida (Amanda Jansson), who is a few years older, and initially thinks she has arrived in paradise. But soon she sees signs that all is not right at the riding school.

The business is run by Tommy (Jonas Karlsson), a charismatic man who can be charming and encouraging but who harbours a dark, manipulative side that leads him to commit both psychological and physical abuse. Very quickly, Molly’s only goal is to escape Tommy’s grasp.

The story stretches from 1996 to the years 2003-2007, when Tommy’s daughter Victoria (Hanna Ardéhn, playing a version of Jahn), her little sister Agnes (Tehilla Blad) and his wife Lotta (Malin Persson) all struggle to flee the violence.

Produced by Jarowskij for Swedish streamer C More, in coproduction with Germany’s ZDF, Riding in Darkness comes from writer Ulf Kvensler, who wrote all eight episodes in close collaboration with Jahn and based on many interviews with those who were there during the 1990s trial.

Kvensler started his TV career writing comedy, before working on dramedies and dramas such as Vår tid är nu (The Restaurant) and Solsidan. He was asked to hear Jahn’s story with a view to turning it into a series, and when he heard her experiences first-hand he was “totally blown away by the story,” he tells DQ. “I liked the challenge of doing something I haven’t done before, which was writing a series based on a true story, and I thought if I could transform everything I felt myself listening to Sophie, and could make the TV audience feel the same things, we would have an incredible story. That’s what I’ve tried to do.”

Jahn’s story is “too fantastic to be made up. There’s so many twists and turns – I was terrified by a lot of the stuff she told me,” Kvensler continues. “It was more awful than you could imagine.”

But over the course of the series, he believes Riding in Darkness is a story about victory against the odds, and about rebuilding broken relationships.

“That’s what brings hope and light to the story at the very end,” the writer says. “It’s a long trip there but it is there, and if it hadn’t been, I probably wouldn’t have been as attracted to the story as I was. But this guy’s mode of operation was to divide and conquer. He always wanted to split them and break up the mother from his daughters and the different stable girls from each other and so on. For many years he managed to do that, but in the end, they have mended their relationships and come back together. There’s a lot of hope in that.”

In dramatising real events, Kvensler has compressed the timeline to play out across 15 years, while several real-life figures have been blended into fictional composites. What he hasn’t shied away from are the actual events that take place, which he says were what gripped and shocked him when he first heard Jahn’s story.

Victoria’s arrival at a police station frames the story, which then goes back to chart Molly’s experiences in the 1990s. Then in the second half of the story, the perspective moves to see how Victoria, her sister and mother attempted to break free from Tommy.

Unlike some true crime dramas, the villain of Nattryttarna plays a prominent role. Kvensler was clear from the outset that he wanted viewers to see both sides of Tommy – his abusive side as well as his charming personality that drew people to him.

“If you don’t show that, the story becomes incomprehensible,” he says. “These people don’t walk around with a big sign on their chest saying, ‘Monster.’ Actually, it’s the qualities they have and the good sides that make them dangerous because that’s what gives them their power. Tommy’s equestrian centre is a magic kingdom people want to be a part of and he is the guy who decides who gets to stay or leave. That role gives this guy tremendous power.”

The writer spent three years working “intensely” to shape the drama’s eight scripts, all the time trying to ensure he didn’t stray too far from what really happened. The show’s producer and research team supported his own work with additional interviews he used to inform the series, and despite the heavy workload, writing the series by himself ultimately worked to his advantage as it meant he kept a single oversight over the story.

“Even though it’s terrible, horrible and scary, I enjoyed writing it. It’s a story that needs to be told,” he says. “It’s not an isolated case 30 years ago, it’s still something that happens. We probably need to talk more about it.”

Director Molly Hartleb (Top Dog, Thicker Than Water) had previously worked with Kvensler on period drama The Restaurant and was immediately drawn to a series with themes of abuse and exploitation that are as painfully relevant today as they were when the story takes place. But she also recognises the story’s focus on family and friendship, and says she had never before seen a Swedish drama series like this where the focus is with the victims and their struggle.

As a filmmaker who always strives to find authenticity in characters and story, Nattryttarna – which is distributed outside the Nordics by Wild Bunch – also proved to be the perfect opportunity for Hartleb to reunite with Kvensler.

“The true story is so strong and so interesting, but that doesn’t mean it works in a TV series format. It’s a big job to make it into a fictional drama but it really worked,” she says. “I bought into Ulf’s vision. I thought it was great so I didn’t have to change very much [in the scripts]. We went with some tweaks and then were ready for shooting.”

After reading the scripts, Hartleb – who is Nattryttarna’s conceptual director and helmed the first four episodes – jumped straight into pre-production and began building ideas of how she wanted the show to look and feel. But while she wanted it to be authentic, she decided not to use too much handheld camera or adopt a documentary style.

Instead, she wanted to follow the story from the perspective of the characters, most notably Molly in those opening episodes. For her, the riding centre is heaven but her view quickly changes when she finds it to be something totally different.

“We didn’t go fully handheld but we used a roaming rig, which made it possible for the DOP to be handheld while the rig made it a little bit more flowy and we could follow characters and do pretty long takes,” the director explains. “I also wanted to be close to the characters, because we don’t have a lot of time for viewers to understand this whole horse world.”

Hartleb also didn’t want to dwell too much on the show’s 90s setting. “When you do period, it’s easy for me to get nostalgic and you start showing all the details within that time period,” she says. “I wanted it to be in the background, so you almost forget its 30 years ago. Since the riding centre and the ranch are pretty timeless in itself, I thought the production design and costume and everything really bought into that authenticity.”

Though the story jumps backwards and forwards in time between events involving Molly and Victoria, Hartleb also wanted to keep the characters in the same “universe,” which meant shooting them in the same way rather than adopting different styles for the story’s numerous strands.

“I wanted it to be consistent,” she notes. “With Victoria, when we present her, we come from summer 1991 and then to winter 2005. She’s in the city and we cut from the ranch, so that was such a contrast in itself I didn’t have to play with different looks. We just followed the different set-ups so we had summer and then snow, which already gives a different feel to it.”

Like Kvensler, Hartleb also wanted to treat Tommy as a three-dimensional character, rather than simply presenting him as the Big Bad of the piece. “He’s super-charismatic, that’s why he can be very manipulative,” she says. “I wanted to keep that because it comes and goes all the time. You’re never sure where you are with him. He’s very unpredictable.”

Filming for the series, which debuted on C More on Monday, took place on the south-western coast of Sweden around Göteborg, although the show’s specific settings – a horse-riding centre and later a court room – often determined how the show would be shot. During the court scenes, Tommy wasn’t even in the main courtroom and appeared via a video link.

“It was a challenge on every level to have such a big part in the courtroom,” Hartleb says. “A shooting schedule and animals is also not a great fit. The horses were great. Of course, they’re very visual and such a big part of the story, and I knew we wanted to be close to the horses to show the relationship between them and the girls. But horses are unpredictable animals so we had to adjust all the time to them.”

Kvensler hopes viewers will watch beyond some difficult scenes in the first episode to leave them questioning what they would do if they had been a parent with a child at the riding school.

“What happened during the trial in the 1990s is half the parents believed the stable girls and the other half believed Tommy and his wife, because they said it was all lies,” he says. “I tried to show that it’s very easy afterwards to see which camp was right, but back then there were also good reasons to believe Tommy and his wife. I hope that people will think about it.”

Inspired by Netflix series Unbelievable, Hartleb also wanted to be part of a series that put a victim’s perspective front and centre. “I thought it was a very unique script and I’m really glad to be part of telling this story,” she says. “Hopefully, it can create some discussion or put the spotlight on this theme and topic. I’m not sure a TV series can change the world but we wanted to give some hope.”