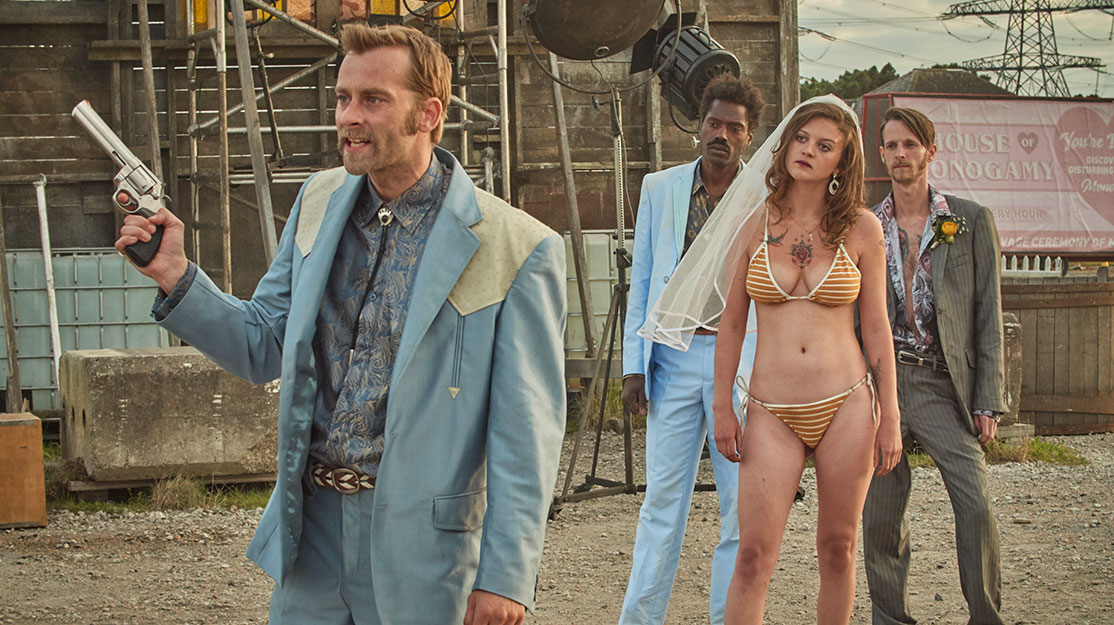 Brave New World, the flagship series for new US streamer Peacock, brings Aldous Huxley’s groundbreaking futuristic novel to the small screen for the first time. Showrunner David Wiener takes DQ on a tour of New London and the Savage Lands.

In the second episode of futuristic drama Brave New World, tourists from New London are visiting the barren Savage Lands, the last semblance of what viewers might recognise as real life. Guests of the adventure park visit the House of Want, where they chew on popcorn while watching, enthralled, as an unruly mob of people piles through some shop doors and past the security guards that block their path to bargains and discounted goods.

This satirical take on present-day culture will not be lost on viewers tuning into this nine-part series, which is based on the iconic 1932 novel of the same name by Aldous Huxley and is also the flagship show for new US streamer Peacock, which launches next Wednesday.

This free-for-all is shown from the point of view of Bernard Marx (Harry Lloyd) and Lenina Crowne (Jessica Brown Findlay), who have travelled for a holiday to the Savage Lands from New London, a utopian society that has achieved peace and stability through the prohibition of monogamy, privacy, money, family and history itself.

During their vacation, however, they become embroiled in a harrowing and violent rebellion and are rescued by John the Savage (Alden Ehrenreich), who escapes with them back to New London. John’s arrival in the New World soon threatens to disrupt its harmony, which is largely enforced by the population’s constant consumption of a happiness-inducing drug called soma, leaving Bernard and Lenina to grapple with the repercussions.

It has been a long road to bring the series to air. The project started at Syfy in 2015 before being given a series order by NBCUniversal sibling USA Network in February 2019, when showrunner David Wiener joined the project. Then in September last year, it was announced that Brave New World would join the roster of NBCU’s upcoming streamer Peacock. Produced by UCP in association with Amblin Television, the show has also been shopped to Sky1 in the UK by NBCUniversal International Distribution.

“It’s a huge TV show, it’s expensive. But we were able to get all the money on the screen,” Wiener says. “The last few months [in post-production] have been challenging, in part because the coronavirus pandemic’s been disruptive. But we had this amazing team that was able to figure out all these technological solutions, so I’ve been able to grade and mix the show online and we were somehow able to do all the ADR [automated dialogue replacement] for the show remotely.”

Wiener is speaking to DQ from his temporary home in London on the final day of post-production, bringing to a close a 14-month stay in the UK. Filming began in May last year and wrapped just before Christmas, with the production based in Wales at Dragon Studios in Cardiff and Bay Studios in Swansea. Dungeness in Kent doubled for the Savage Lands, while other locations were filmed in and around London.

Post production, which has been in full swing since January, has also included the addition of more than 2,300 VFX shots to create the towering cityscapes of New London, though most of the sets were physically built, meaning the actors spent a minimal amount of time in front of blue screens.

Wiener joined the production with a new vision for the series, which would interpret Huxley’s groundbreaking novel not simply as a piece of dystopian future-gazing but also as a satirical commentary on society and communities.

“I wanted to bring some fun to some pretty serious philosophical ideas and some pretty big themes,” he says. “Another ingredient that was important was to approach it as a relationship story about this triangle that forms between John, Lenina and Bernard, [and to look at] how they engage with the big problems that Huxley sets up, namely monogamy, possessiveness and jealousy.

“These are new emotions [for the characters] so, in some ways, this show is about people engaging with big feelings for the first time. Sometimes it’s a little more like a John Hughes [The Breakfast Club, Ferris Buller’s Day Off] film than it is a dystopian drama where the threat is the state. Instead, the threat is within ourselves. That was the twist; it seemed to work but I had to be able to dramatise that. I wrote the first two episodes and they provided a lot of opportunity to define the tone of the show, particularly in the second episode when Bernard and Lenina go to the Savage Lands.”

While the series plays with the same themes as Huxley’s novel, Wiener says the characters take a different path from that in the original story, allowing his writing team to keep the book at arm’s length in an attempt to surprise viewers in a truthful and emotionally resonant way. Wiener also wanted to focus more on character development, with Lenina in particular going through a significant transformation.

“In the book, she is a superficial person concerned with having fun and romancing her way through New London. And by the end of the book, she is more or less the same person, if a little more jaded,” the showrunner explains. “In our story, that presented a real opportunity. She is very much the centre of the world of our show and is the eyes through which we meet New London. All of the characters change a lot, but she’s a radically different person by the end of the story.

“The book also devolves into a pretty intellectual Socratic exchange at the end between John and Mustafa Mond [played on screen by Nina Sosanya]. Huxley came up with this really radical premise of, ‘What if there’s a place where everybody’s really happy – what does it cost them?’ and there’s the famous line about wanting the right to be unhappy. Dramatically, that would be a tough episode of television to watch, but the idea is really fascinating and one we were pretty game to dramatise.

“As technology evolved, Huxley saw humanity’s tendency to choose the easy pleasure over the more uncomfortable truth, and he sets up a world where people are not looking beyond themselves or within themselves. In that moment where you might be alone with your thoughts, there might be soma or sex or some sort of magnificent distraction to take your attention away, so you never have to exist or really look at yourself.

“If you look at where we are at the moment as a culture, there’s never been a time where it’s been more necessary for people not only to take an honest look within, but also to look beyond themselves and say, ‘I may not be comfortable with how things are but I’m going to look at it.’ We cannot afford the degree of pleasure they get in New London at the start of the show.”

New London, a glass-walled metropolis, was created by production designer David Lee alongside the VFX team and architect Tim Evans to support the themes of the series, namely the absence of privacy. As a result, there is lots of glass and open spaces that naturally bring people into contact with each other.

In contrast, the dusty, barren Savage Lands reflects the environmental collapse that led to the birth of New London. It now serves as an adventure park for New Londoners to witness displays of propaganda that support their feeling of superiority. However, things go a little sideways when Bernard and Lenina arrive and they find themselves amid a rebellion, putting them into contact with John.

“John’s arrival [in New London] is the big disruption,” Wiener says. “We have all these people living in a hierarchy and who haven’t engaged with ideas like monogamy. They haven’t really experienced jealously and, if they have, it’s been something they’ve been able to soma away. When John arrives in New London, his presence, behaviour and, eventually, his actions begin to cause a breakdown in that structure.

“Bernard is fascinating. He’s more advanced than everybody because he’s had feelings of self-doubt. When he meets Lenina at the end of the pilot, the thing they have in common is they’re both outsiders. They feel unhappiness but they don’t know what to call it yet. It’s anxiety or the feeling that something is missing from your life. That bonds them together really early, but that’s a subversive thing in New London, to be unhappy. Why would you be?

“John’s different from the John in the book. It didn’t seem that interesting to have someone like [US vice-president] Mike Pence coming to New London. It would be a really short show – ‘No thank you to sex, no thank you to drugs. I’m outta here.’ It felt more authentic for John to try to experience those things and learn from them.”

Though he has run writers rooms for Homecoming and Fear the Walking Dead, Wiener has been given the title of showrunner for the first time with Brave New World. He says he didn’t realise how big the show would be until he stepped onto the sound stages and saw how the production team had realised their vision for the series. The show was so big, in fact, that it outgrew the six stages at Dragon Studios and took over Bay Studios as well. As the showrunner, Wiener would be on set every day while working alongside production designer Lee, lead director Owen Harris and costume designer Susie Coulthard.

“People live or die as showrunners depending on how much they can effectively delegate,” he admits. “If you try to control it all, it will eat you. It’s such a team effort, and a huge amount of credit goes to the people whose names aren’t on the front of the show. They’re the ones who made it. We had more than 700 people work on this show on four different continents.”

The project also saw Wiener work with intimacy coordinators for the first time, with Ita O’Brien and Kate Lush overseeing choreography of the numerous sex and nude scenes that take place.

“There’s a lot of sex in the book; it’s very necessary to how New London society works,” Wiener says. “I had never worked with an intimacy coordinator before. I didn’t know if it was necessary or really what they do, but it made all the difference. Kate and Ita gave our actors such confidence, command and ownership of the experience of being vulnerable. You’re exposed, and they just embraced it.

“The show is not graphic but there are a lot of bodies. Sex is a part of the show. But I had no idea how valuable they would be and how they made it a safe thing to talk about. They created an atmosphere of respect. It was really liberating for the actors, and certainly liberating for the filmmakers because we felt protected. Now, I couldn’t ever imagine working without an intimacy coordinator. Everyone should.”

With Brave New World designed as a serial drama, Wiener says doors have been left open at the conclusion of season one for the possibility of a return.

As for what viewers will take from the drama, Wiener adds: “I hope people think about what it means to love somebody, what it means to suffer and to learn. All of our characters have those experiences. As philosophical as it is, it creeps up on you. Every part of the show is active and entertaining. It’s a great ride.”