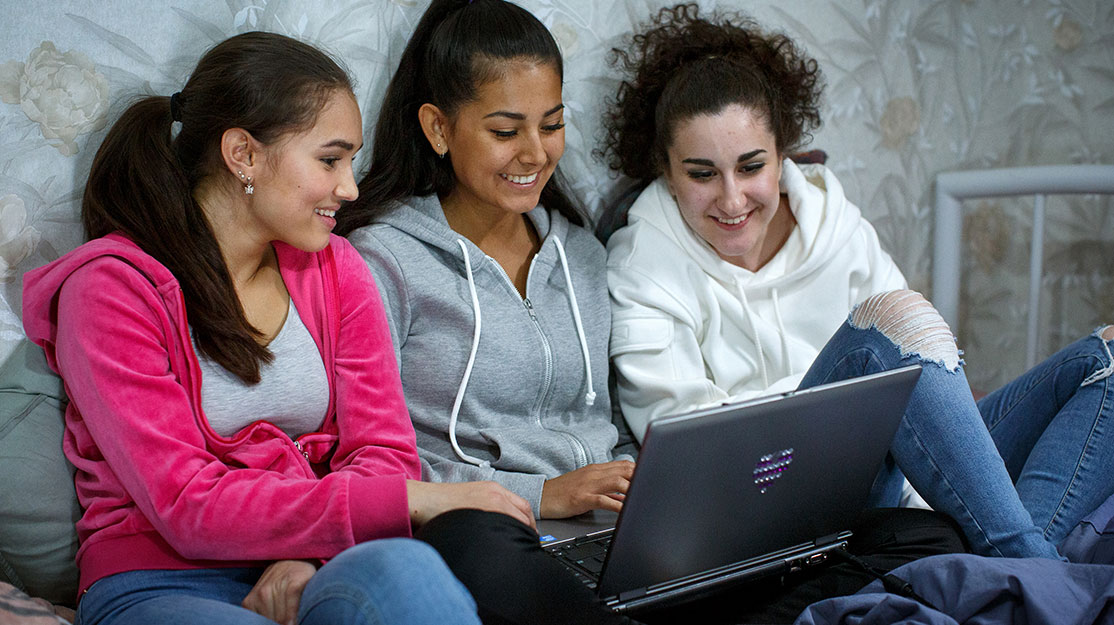 The writers and producer of Swedish drama Kalifat (Caliphate) tell DQ how they crafted this story of five young women who become radicalised by religious fundamentalism.

From the production team behind Bron/Broen (The Bridge) comes Kalifat (Caliphate), the story of five young women whose fates are intertwined in an examination of how religious fundamentalism can seduce individuals and destroy lives.

Based on an idea from Wilhelm Behrman, who writes the series with Niklas Rockström, the eight-part drama is produced by Filmlance for Swedish broadcaster SVT and distributed by Endemol Shine International. It is directed by Goran Kapetanovic and filmed in Stockholm and Jordan.

Here, Behrman, Rockström and producer Tomas Michaelsson reveal how Caliphate was conceived, developed and brought to the screen.

What are the origins of the project?
Tomas Michaelsson: This drama handles a very sensitive but hot topic: young people being seduced by violent extremism. Wilhelm Behrman pitched the idea to me in late 2014, when Isis were in every newspaper every day and they were releasing their extreme terrorism videos. We then pitched it to SVT, which immediately wanted to start developing it with us.

Why was this a story you wanted to tell?
Michaelsson: Wilhelm’s pitch was probably the best I’d ever heard. I still remember how he told it and how I felt. This was a must-tell story dealing with the most complex issues – and at that time, we were still in the middle of it. The timing was right to explore the difficult and complicated topic and understand almost incomprehensible issues around how young Swedes are prepared to go as far as to go to a foreign country and go to war to establish a caliphate.

Wilhelm, how did your newspaper background inspire or influence the story?
Wilhelm Behrman: I suppose I learned the importance of research when I was working as a reporter – and to use research from a lot of different sources. I also learned to always search for the individual behind the general story, to write about specific human beings and not ‘groups’ or ‘representatives,’ because one individual will never be the perfect representative of an entire group.

What were the themes you wanted to discuss in the series and how was this achieved?
Behrman: The one big theme was: how does radicalisation work and how do we make it fit into the thriller format? People have been radicalised in thousands of ways and we wanted to show some of these different ways. Some have nothing to lose and get recruited in prison, some fall in love with the wrong guy, some find their way to Isis when they find out they share the same political views and enemies, and some just want the adventure.

How did you come to work together and what was your writing process?
Niklas Rockström: We are actually cousins but we became friends as grown-ups. And it turned out we both wrote screenplays, so after some years talking about it, we began writing together. Our first project was Before We Die. We always create the storyline together in the writing room and, after that, mostly because of lack of time, we go our separate ways to write the episodes.
Behrman: We’re cousins, but we didn’t know each other until we met on a train on the way to see our dying grandmother. We found out that we had chosen the same occupation and quickly became best friends, but it wasn’t until 10 years later that we dared to take the scary step and start working together. Now we have been doing that for eight years. Our process is that one of us comes up with an idea and, if the other one likes it, we build the story together and write a storyline. After that, the one who came up with the idea does most of the scriptwriting.

How much research did you do? What surprised you about the subject or changed the story of the series?
Rockström: We did a huge amount of research, as much as possible, as this sensitive story needed a lot more work than any other project I’ve worked on. The research changed the story in the details sometimes, but, as I recall it, not in any bigger sense.
Behrman: We have read tons of books and articles about Isis and radicalisation, listened to podcasts and watched documentaries. But most importantly, we’ve had the privilege to interview experts on these subjects and people from inside the Swedish secret service. The most shocking insight we got is how quick these processes can be. Sometimes it just takes a couple of weeks to radicalise a person to the point that he or she will be willing to leave everything and join Isis.

How realistic is the series in terms of the experiences of those living in a caliphate or dealing with religious fundamentalism?
Rockström: Kalifat is, of course, a drama and not a documentary. None of us visited Raqqa during the time it was the capital of Isis. That said, the show is still quite realistic. For example, the life Pervin [one of the main characters] lives with all her restrictions is probably not far from the truth.
Behrman: Quite realistic. It’s no documentary, of course, but I think we’ve managed to catch the atmosphere you can find in the secretly filmed material we have seen from inside Raqqa. And when it comes to religious matters, we have checked the story with experts on Islam to make it trustworthy.

How did you balance the stories of the five main characters?
Behrman: What is important is that when you write the storyline, you work thoroughly so that each one of the lines has its own complete arc in every episode. That doesn’t mean they all have the same weight in all the episodes, but you have to think it through and be prepared to complete the storyline if necessary.

Writing a thriller, how did you try to create tension in the series?
Rockström: That is a complex question! To keep it short, when writing the story, it was important to be clear about what was at risk for every character, which probably is the way every thriller is told but perhaps even more important when it came to Kalifat.
Behrman: By always, always trying to surprise the audience. If an idea comes too easily to you, it’s probably a cliché and should be discarded.

What were the biggest challenges you faced, either in development or production?
Michaelsson: The development was actually quite straightforward. Wilhelm and Niklas had such a well-developed storyline and the first draft of every episode was in really good shape. The production was a bigger challenge in many ways. Usually, a drama recreating the Middle East on screen would be filmed in Morocco or Southern Spain. Luckily, I went to Jordan to shoot a small part of a film in 2017 and established a very good relationship with Jordanian producer Rula Nasser. During the development of Caliphate, I told Rula about it and asked if she thought it would be possible to shoot a TV show about Isis in Jordan and make Amman look like Raqqa.
The biggest challenge was the casting. We, together with SVT, decided early on that we wanted unknown actors, as we were striving for a very authentic look. We didn’t want the audience to see famous faces from other TV shows. However, the actors still had to be top class. Most of the characters are also quite young. So, finding young, unknown, really top-notch talent is a challenge. We spent a lot of time in the casting process to get it right, and it paid off.

How do you hope viewers respond to, or engage with, the series?
Michaelsson: I want this to be the most thrilling story they have ever seen. I also want the audience to cry and really feel for and engage with the characters, and for people to ask questions like how and why can someone join those organisations? I have learned a lot during this production but I still don’t really have the answer. To me, this was a show that had to be told with authenticity and the characters had to be multi-dimensional. We wanted the audience to feel they were in the middle of the story.