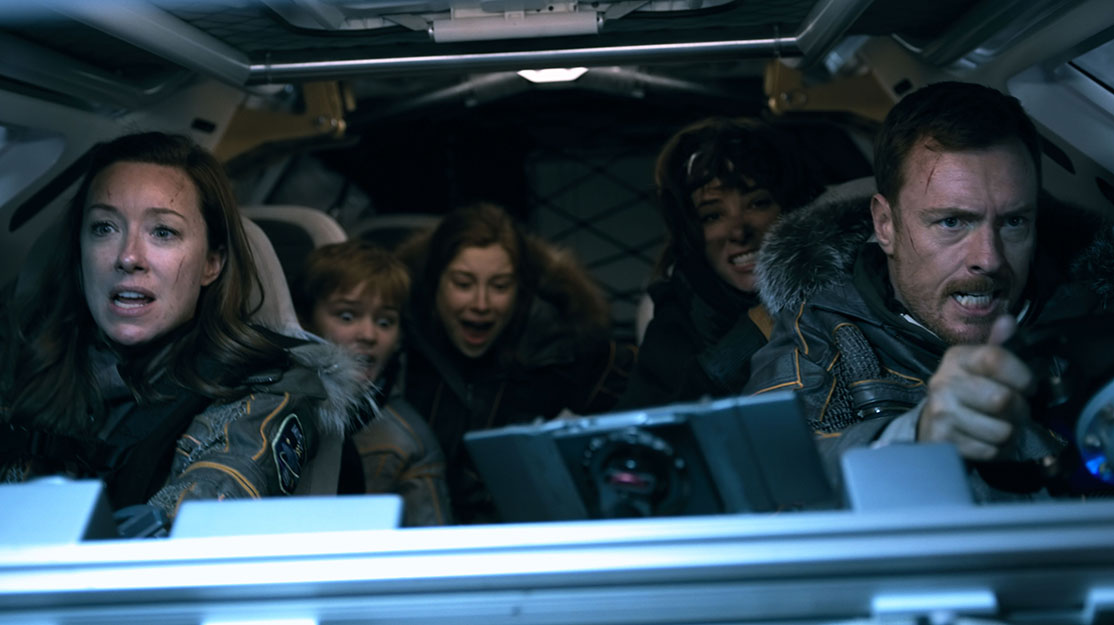 Of all the series that have been rebooted over the last decade, perhaps Lost in Space has had the longest journey. The classic science-fiction series originally aired between 1965 and 1968, beaming the adventures of the Robinson family into homes across America.

It was a landmark show for many reasons. Not only did it explore themes of space travel and other-worldly adventure, it put a family at the heart of the story and has since become known for the central relationship between Will Robinson, the youngest child, and the ship’s robot. On a production level, it straddled the move into colour, with the first season airing in black and white before new technology gave it a totally different complexion.

Now, 50 years since the original series came to an end after three seasons on CBS (a much-maligned 1998 feature film aside), a long-awaited reboot from Legendary Television is set to land on Netflix this Friday.

Set 30 years in the future, this modern reimagining sees the Robinson family among those selected to make a new life for themselves in a better world. But when they find themselves abruptly torn off course en route to their new home, they must forge new alliances and work together to survive in a dangerous alien environment, light years from their original destination.

A reboot of Irwin Allen’s original series has been a long-time passion project for executive producer Kevin Burns and, after several misfires, the project gained momentum in 2014 when writing partners Matt Sazama and Burk Sharpless, both self-confessed sci-fi fans, signed up to work on the 10-episode series.

“I realised I have a daughter who is turning four and before she was born I think I took my first meeting on this over at Legendary,” Sharpless recalls. “They had procured the rights and I still remember the afternoon Matt and I sat down for a meeting and they said, ‘Have you ever heard of Lost in Space?’ We looked at each other and it was almost like someone saying, ‘Have you ever heard of Star Wars?’”

Burns had to be convinced that the reboot would stay true to the original series while being made relevant to a modern audience. “The thing [Burns] told us that has really been our guiding light is this is a story about a family, and a family that, if you watch it, you want to love them and you want to be part of this family,” Sazama says. “For all its quirks, the people who loved the original show loved those characters and wanted to be part of that family, and we think people are going to fall in love with the 2018 Robinsons just as much.”

While sci-fi series in general, and space-set dramas in particular, are seeing a huge resurgence (The Expanse, Star Trek, The Orville), Lost in Space stands out for its aspirational, optimistic themes of a family standing together in a strange environment, with the sci-fi elements largely window dressing for the emotional adventure at its core.

It’s a foundation the show takes from the original series, which itself was inspired by The Swiss Family Robinson. Sazama and Sharpless developed this idea until Netflix came on board in late 2015, before greenlighting a full season in June 2016. Synthesis Entertainment’s Burns and Jon Jashni are also executive producers with Applebox’s Neil Marshall and Marc Helwig.

The setup largely remains the same. Toby Stephens (Black Sails) and Molly Parker (House of Cards) play John and Maureen Robinson, the parents who are struggling with their relationship while trying to keep their family safe. The Robinson kids comprise Taylor Russell (Falling Skies) as strong-willed and confident Judy, Mina Sundwall (Maggie’s Plan) as quick-witted and decisive Penny, and Maxwell Jenkins (Sense8) as youngest child Will, who is smart and brave – and friends with a robot. Some characters, however, have been given a reboot of their own.

“In the original show, Maureen was doing laundry. She was not part of the action. But our Maureen is an accomplished scientist and a great mother and she becomes an action hero in her own right, not because of her physical strength, necessarily, but because she uses her brain and her courage to move the family forward,” Sazama explains. “She was the one who changed the most. Even Judy, in our version, is a doctor and a character of action and has an actual storyline of growing up. She’s 18 years old and we explore what it means to be 18 and trying to be an adult for the first time, which were things you couldn’t really talk about in the original show.”

Dr Smith, meanwhile, the villain played by Jonathan Harris in the original series, is a woman in the Netflix reboot, played by Parker Posey (Dazed & Confused). Meanwhile, the robot is given a shiny new exterior and an alien backstory.

“There are many stories to tell about Lost in Space but the one everyone knows is ‘Danger, Will Robinson,’” Sazama says, referring to the robot’s iconic catchphrase. “It’s a story about a boy and a robot. We said that if we were going to do that, the robot has to be a character that has desires and fears. That became the core of the story of season one – the robot and exactly what it is. It’s mysterious, it’s of alien origin. That allows us to tell a story between the boy and the robot you haven’t seen before.”

And what did Netflix make of the updates to the original series? “Netflix only had one thing they asked us for, which is at the end of every episode, end on something that’s so exciting that you want to keep watching,” Sazama adds.

Coming from the feature world, Sazama and Sharpless (Dracula Untold, Last Witch Hunter) worked alongside showrunner Zack Estrin (Prison Break, The River) to turn their pilot script into a series that has the potential to run for a decade.

“Zack guided us in creating the tone of optimism we shared together so he helped us to make a TV language where scenes will breathe inside this adventure,” Sharpless says. “It was so ambitious. We wanted each episode to feel like a movie but the whole season to feel like a movie. That constant juggling, we felt we had never seen on TV before. We relied on Zack to help us build these episodes out so they felt the way all good TV episodes do.”

He continues: “For a lot of individual writers, there’s a lot of ego and self inside the scripts. But when you work with a writing partner, you focus not only on your idea but on the turning point or set piece you’re trying to build with a character revelation. In a good writers room, especially in the way Zack guides it, it’s always about trying to find that idea. Having everybody become selfless and open with their ideas to try to find that solution is really exciting. Honestly, it might be one of the most exciting creative think tanks I’ve ever been a part of.”

Estrin hadn’t planned to buckle up for a journey into space, instead looking forward to taking some time off. “Then I read that script and I was like, ‘Son of a bitch. I have to work now,’” he jokes, “because I read it and thought I would be so mad at myself watching this thing on TV knowing I could have done it. I was so excited about the possibilities of what it could become and what it would mean to my two young daughters to have a show that is aspirational and has great female characters.”

The showrunner drew on sources such as ET and The Iron Giant, both of feature relationships between a boy and an other-worldly creature, when it came to Will’s friendship with the robot, and admits he wants the show to hit evoke similar feelings that Stranger Things did with its 1980s nostalgia. “Even though this show feels contemporary, it’s going to tickle you in one of those places you remember as a kid, like seeing Star Wars or ET for the first time,” he says. “We hope you’ll get those same feelings because we take this grounded sci-fi approach where there are still cords that attach your radios to things. We’re not in a world of phasers and guns; we’re very grounded.”

Lost in Space was filmed in Vancouver, both in the studio and on location. It’s a stunning feat of production design that brings together frozen glaciers, luscious forests and vertigo-inducing cliff drops. Of course, visual effects play their part, but the producers were keen to ensure the new worlds featured in the series were relatable, with the odd dust storm thrown in for good measure.

“We wanted it to feel as natural as possible,” Estrin says. “We didn’t want to create a world that looked imaginary. We didn’t want to be in a world that was so clearly sci-fi, that was clearly created on a computer. When you think of Return of the Jedi and they’re speeding through the forest where the Ewoks were, that was just a forest but occasionally you’d pop wide and see double planets in the sky. They didn’t go out of their way to make it seem like everything was a strange alien environment. We also wanted to have it feel relatable and grounded but just special enough where you feel like you’re getting some eye candy.”

Coming from a network television background, Estrin says working for Netflix has now “spoiled” him. “It’s like you’ve been a painter all your life and then suddenly someone gives you a canvas that’s five times the size and you’re painting with 40 more colours and 50 more brushes,” he says. “It’s so exciting to be able to make television in this way. When you’re doing a network show, it’s really challenging because you’re writing and doing post while you’re shooting at the same time. What’s amazing here is we can spend the time and write first, then shoot the show, and then do all the visual effects. So, yes, it takes two years but your focus is so much stronger and clearer.”

Sazama, Sharpless and Estrin are already back in the writers room plotting out the Robinsons’ next adventure, though season two has not yet been confirmed.

“Netflix is paying for 10 more scripts so, should the show be the success we all hope it will be, we’re ready to go into production for season two,” Sazama says. “We have a young cast and they get older every day, so once Netflix is confident the show is a success, we’re ready to move on that before they get any older.”

Estrin adds: “It’s all extremely exciting because we’ve been working on this thing for so long – the writers room began almost two years ago – that everyone you know is like, ‘So what is this thing you’re working on?’ To finally have it out in the world is quite exciting.”